A New Table for The Van


It was actually December 2019 when I did this and I'm just now getting around to posting about it. 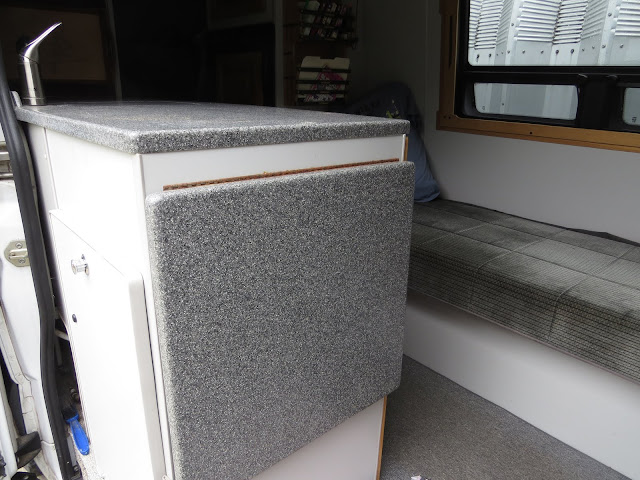 When designing The Van, to be built by Sportsmobile of Austin because I was working 60 hour weeks at the time in the run-up to retirement, I specified a flip-up extension at the end of the counter. 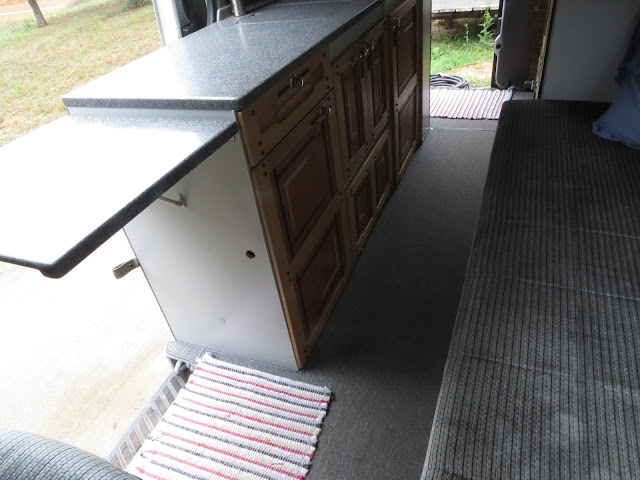 This was a way of getting some additional counter space (Which I really don't need as I already have 5.5' of 22" deep counter.) as well as a handy little table for the swiveled passenger seat. Although handy might be stretching the point a little.

In reality this flip-up, while better than nothing, has its limitations.
As a counter extension - well - as I already pointed out, I really don't need more counter space.
As a table it's really too high to be entirely comfortable when sitting on the swiveled passenger seat, is fixed in place to the counter cabinets which make it too far away from the seat unless I sit right on the edge, is absolutely useless if I am sitting on the gaucho, is too high and far away to be an effective night-stand when the gaucho is in bed-mode, and has to be cleared off and stowed away in order for me to get in or out of the side door. 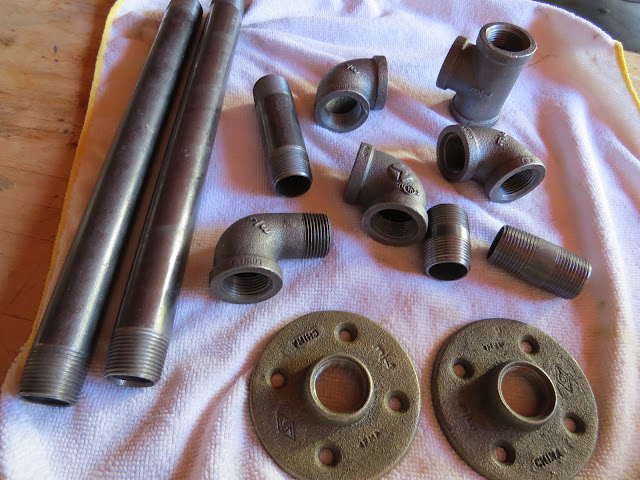 I really don't have an excuse for putting up with this for ten years before getting off my butt and doing something about it, but at least now I've finally rectified the situation.

After doing up some drawings in SketchUp and pondering the situation for a while I headed off to the hardware store (Ahh, those were the good ol' days! The pre-corona days when we could just wander in and browse a store without Darth Vardering behind a mask and carrying a 6' pool-noodle to defend our personal space against deadly pathogens.) and came home with about $55 worth of stray 3/4" black-iron pipe bits and pieces. (Those flanges alone are nearly $8 each!)

The rest, including the table itself, I scrounged up from the "scraps" around the shop. 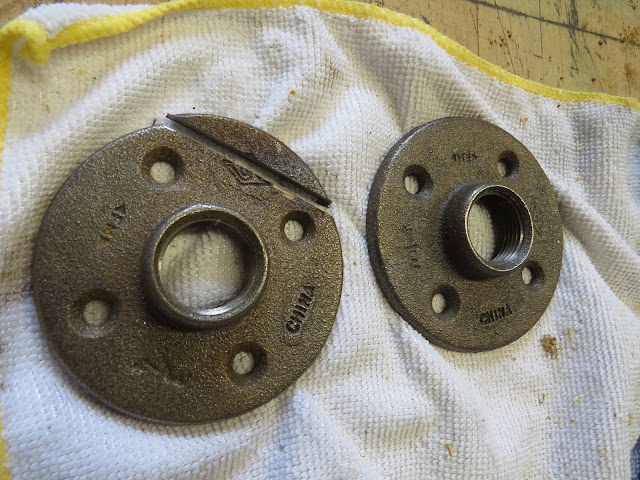 The first thing I did was cut a slice off one of the two (expensive) flanges. This modified flange will be screwed to the floor right up against the end of the cabinet where the flip-up used to hang. 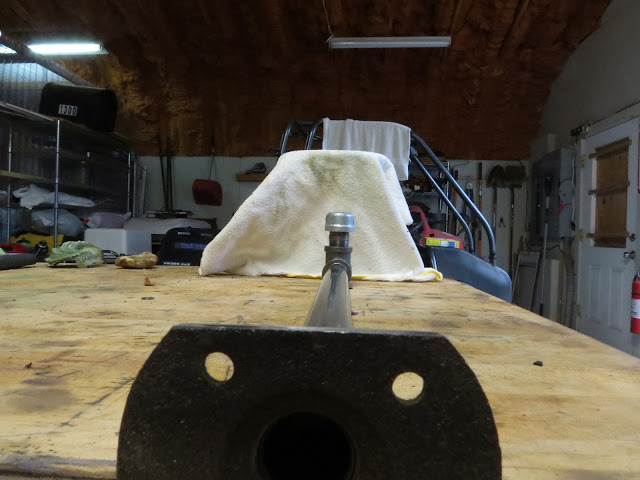 The location of this cut is the same distance from center (where the center of the pipe will end up, which is the standard point for measuring black-iron pipe and fittings.) as the face of the diverging leg of the T fitting you can see screwed onto the other end of the pipe there in the distance. 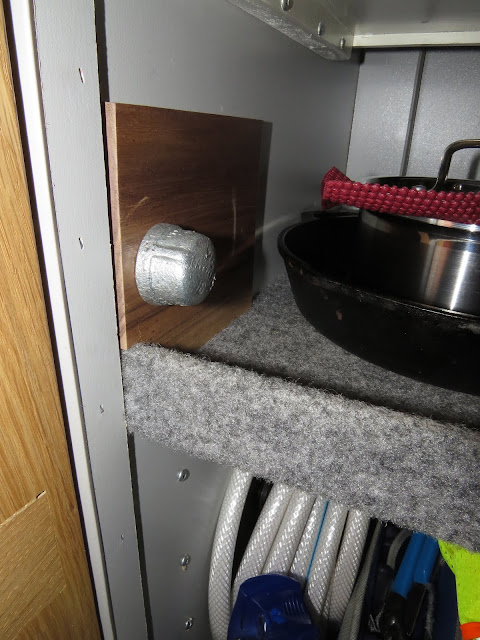 where it would be captured on the other side by a cap, clamping the whole thing firmly to the cabinet itself.

By using an off-the-shelf 18" nipple between the flange on the floor and the T I ended up near where a shelf attaches to the end of the cabinet. In other words, one of the more structurally sound locations available. (Using off-the-shelf components saved me having to get a pipe custom cut and threaded. Something not all hardware stores are set up to do anymore.)

For even more distribution of any loads that might be incurred at the T-nipple-cap location I glued a hardwood block to the inside of the 1/2" thick cabinet wall before tightening the cap down to tightly clamp the vertical pipe in place.

No need to add cushioning to the cap (For some reason there were no caps available in raw black-iron so I had to use this galvanized cap instead, but since it's out of sight inside the cabinet it wasn't a deal-breaker.) because the curvature of the cast-iron pan that sits there on that shelf won't let pan and cap connect, keeping them from raising an unholy rattle as I go down the road. 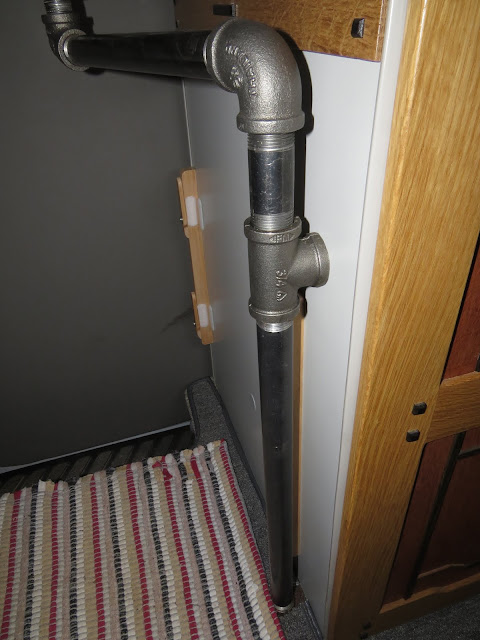 Here you can see the installed vertical portion of the table-leg with the marine-grade carpet, which is really a custom fitted rug that snaps in place, notched to fit neatly over the floor-flange and around the pipe.

I could have gone to the trouble of sewing an edging around this notch, but in my experience dabbing the backside of the carpet with contact cement does just as good a job at keeping things from unraveling with a whole lot less effort.

Before installation of this vertical section I firmly tightened a 3" nipple into the top of the T and loosely threaded a 90 degree elbow on top of that. (Loosely so the elbow can swivel, which is key to making this table work.) 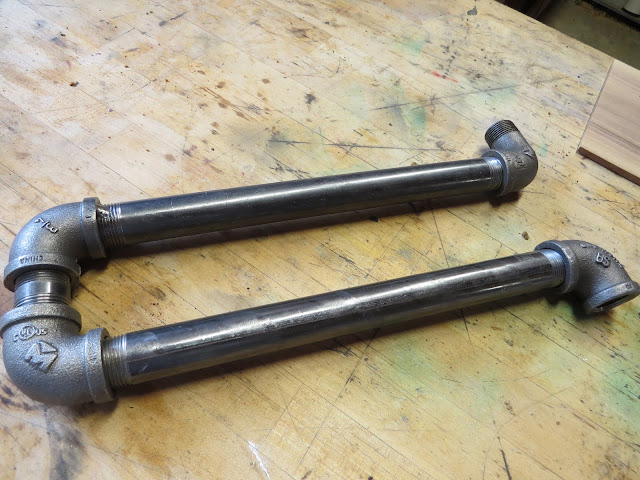 For the articulating arm that was key to making this table work I assembled more of my bits and pieces, using 12" nipples for the long arms, a close-couple nipple for the short vertical (This photo shows a slightly longer nipple in that location which I ended up using in the T that clamps the leg to the cabinet side instead.)

The 90 degree elbow on the lower right is the one that goes on top of the vertical pipe. The street-elbow on the upper right screws into the second flange which is attached to the bottom of the table-top.

While the vertical joints in this setup are designed to swivel, all the horizontal joints 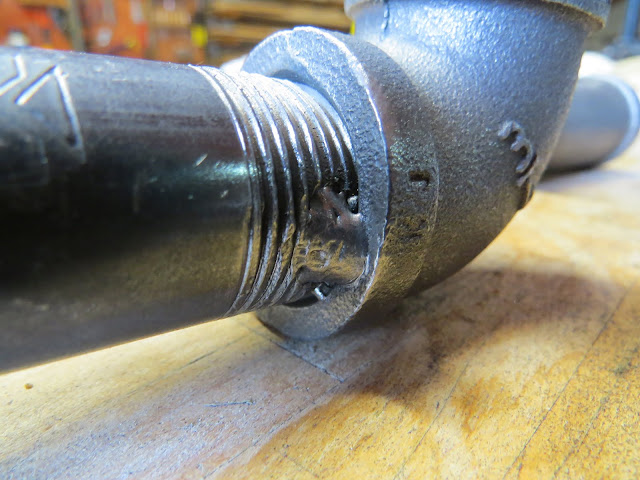 must remain fixed and in alignment so the table doesn't tip over and spill my dinner, so after taking a pipe-wrench to them and carefully tightening things as far as I dared while still maintaining proper alignment, (Black iron pipe is malleable which means that you can actually gall and strip the threads if you tighten things too far - - Go ahead, ask me how I know what too far is!) I pulled out the 10KW welder (I know, serious overkill, but that's the only welder I have.) and tacked those joints to make sure they stay in place. 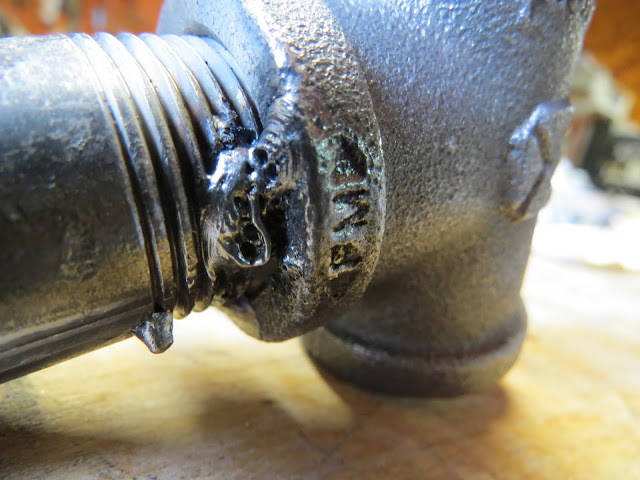 but the inescapable truth is that I suck at welding, and this is one of the practice tacks I did on some extra-bits first that I didn't show you. (refer back to that sentence about tightening things too far to figure out how I ended up with otherwise useless extra-bits . . .) 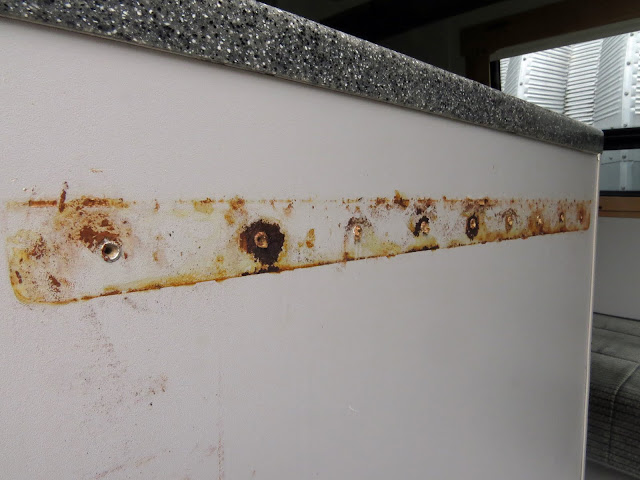 While all this was going on I had another issue to deal with. The "stainless steel" hing used to hang the flip-up on the cabinet end has been getting more and more rusty every year and this is what was left behind when I removed it.

And don't worry about the flip-up bit of counter I just removed. (As if you were.) After removing the hardware from it I have now re-purposed that bit of solid-surface counter as a known flat-and-true surface to build my railroad models on. In fact I was gluing up parts of a model on it earlier today. 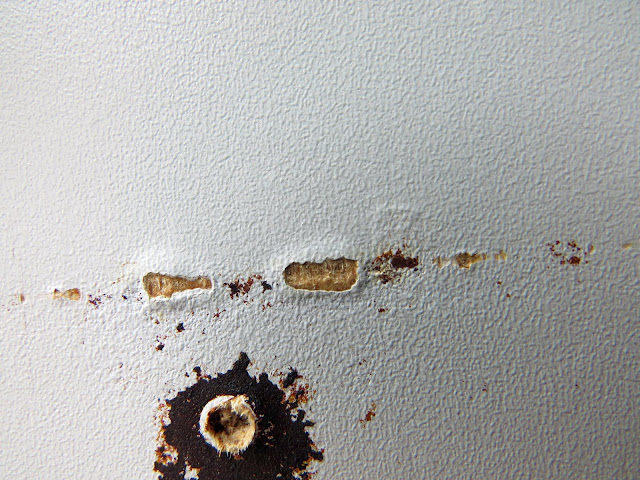 Vigorous cleaning only partially solved that problem, but that was a mute point since the surface melamine of the cabinet end has already been breached by the corrosion in a few places. 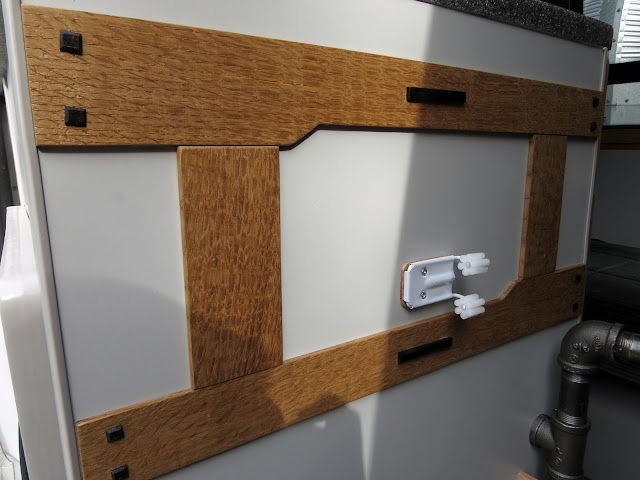 My fix for that was to drag out some of the quarter-sawn white oak scraps left over from when I built the cabinet doors and fashion a "design element" that matches the architecture of the cabinet doors and covers up the mess left behind by the corroding hinge as well as the holes left by the flip-up's support leg, and also serves as 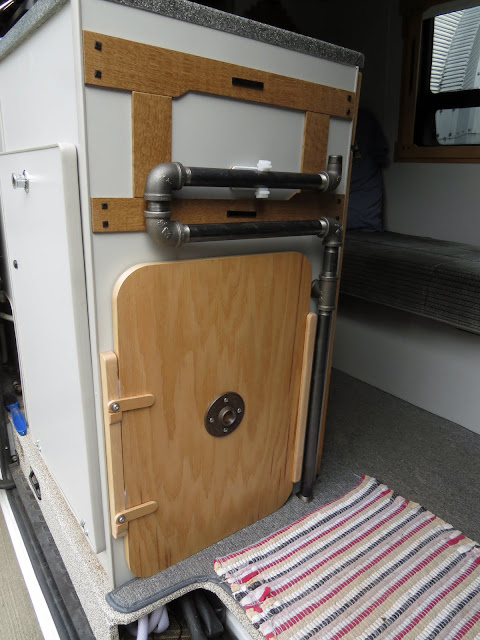 bumpers for when the table-arm is being manipulated around as well as stowed away.

The table-top is made from a chunk of 3/4 oak-veneered plywood I had left over, edge-banded with an iron-on banding, also left over from another project. 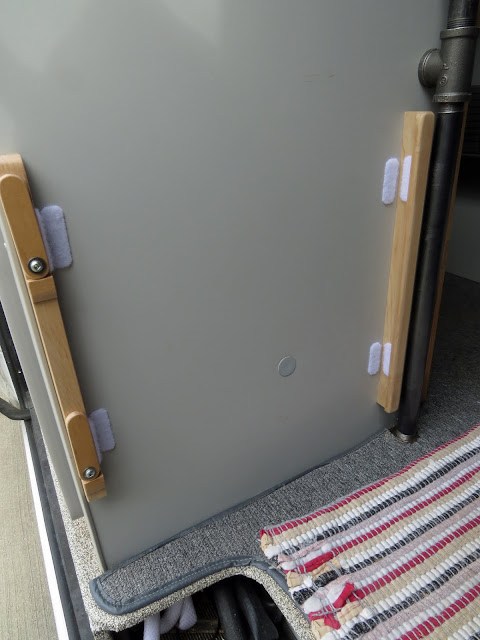 To keep the table top in place when stowed away I fashioned some cleats out of maple, which matched the table better than the white oak and saved me from having to cut into a nice quarter-sawn white oak board that I can now use somewhere else - eventually.

All of the wood parts of this table are finished with 5 coats of ragged-on, water-based Minwax Polycrylic satin. After some snobbish resistance to anything other than oil-based clear finishes, I've been using this far less toxic and nearly VOC-less stuff for years now and find it very resilient and long-wearing, even in harsh and sometimes-less-than-dry conditions. I even sprayed a couple coats of this on the black-iron pipe assembly to postpone corrosion to somewhere into the future.

I used the loop side of some stick-on velcro to make pads to keep the stowed table from rattling when going down the road. 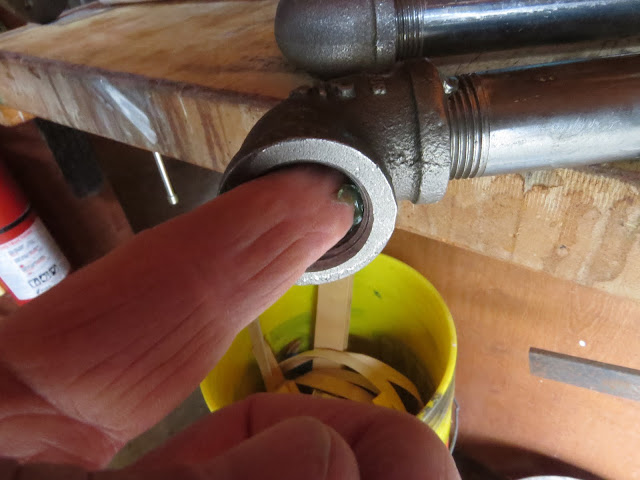 There are three joints in the articulating-arm assembly that are designed to swivel so that the arm and table-top - well, articulate. For two of these I squished a dab of high-pressure grease into the threads prior to final assembly to help keep things loose and swiveling.

The third joint is where the flange on the bottom of the table-top screws onto the street-elbow at the end of the articulating arm. No grease there because that joint is taken apart and exposed when the table-top is stowed. 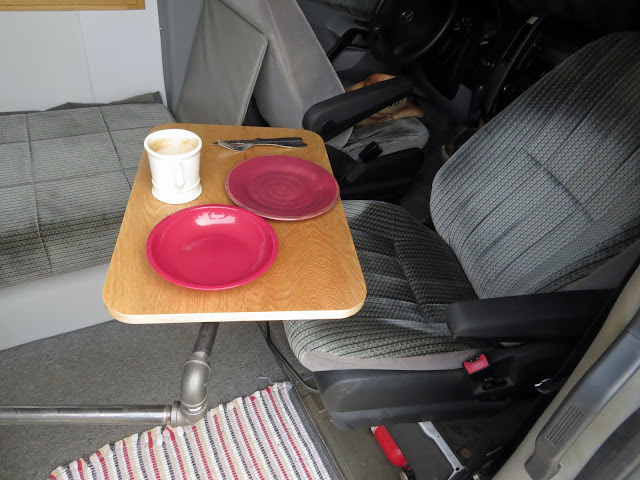 So does the new table address the issues as I was hoping?

Comfortable, sit-back-dining for the first time ever at both the passenger seat 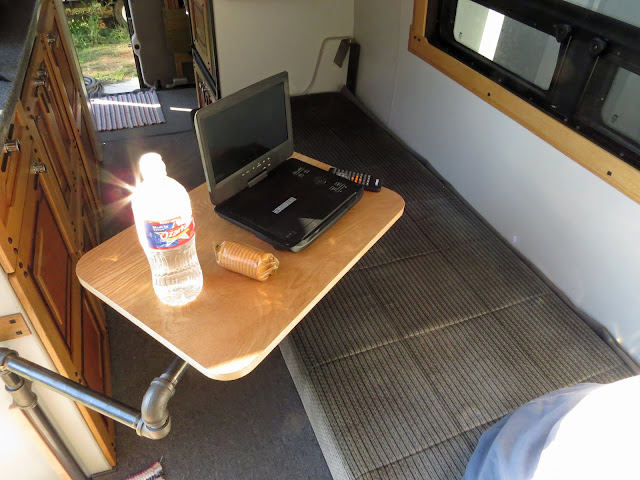 And now I can look forward to the decadence of kicked-back evening lounging without having to rest my portable DVD player on my lap while balancing my drink beside me on the gaucho, 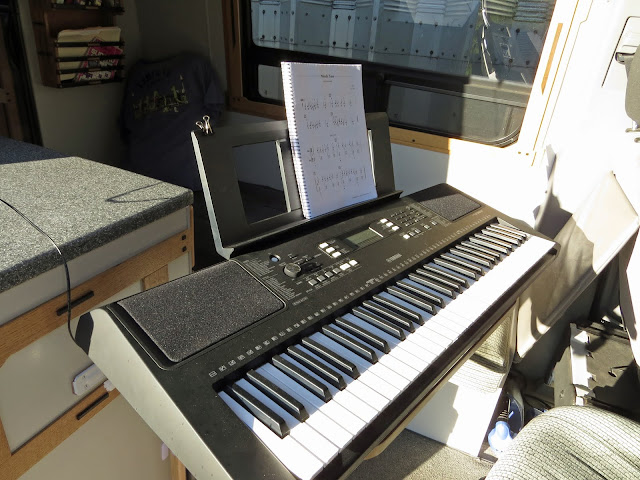 and, though I generally prefer to play my keyboard (Always with a headset on so don't go gettin' all angry-villagers on me!) while standing at the counter, now I also have the option of sitting to butcher play some tunes.

When stowed the table is as unobtrusive as the flip-up was.

When set up - - Pull the arm loose from the "broom clip" that keeps it in place while traveling, flip up the two retainer-toggles holding the table in place, set the table on top of the arm and spin to attach. (I was a little worried that getting the flange attached to the bottom of the table threaded onto the street elbow would be finicky, but it is surprisingly easy) - - the table easily moves to all sorts of locations, without having to remove the contents first, getting it out of the way and letting me move around inside The Van as well as get in-out the side door.

And all the bits of the new table weigh in at almost exactly what the flip-up weighed so in that respect it was a net-zero deal. (Corian is beloved by many but is actually heavy stuff to be putting into an RV.)

So again, I don't know why it took me so long to get around to this relatively easy project, but I finally got there.


So now what can I hack up next?