It was the Sunday of Thanksgiving Day weekend and I was on the road. (El Día de Acción de Gracias in Spanish, which somehow sounds not only more mellifluous but also more like the original intent of the day, emphasizing, as it does, the action of giving thanks - not that any of that's relevant to this post - - - so moving on - - -)
I didn't plan on being on the road on this day. I don't usually get out on the road for any holiday, let alone one that means travel with a capital T to the collective American psyche as much as this one does. It just happened.
When I made my reservation for a campsite at South Llano (pronounced Yah-no) River State Park several months ago I was just looking for a block of available nights, and the calendar on the reservation site doesn't differentiate holidays from normal days, so when I found a campsite with a consecutive string of 5 free nights I closed the deal.
It wasn't until a week before the trip, when the reservation system finally allowed me to pre-register and print my windshield-pass, that I realized the conflict between my reservation and the close of the holiday weekend.
Oh well. I wasn't about to give up my hard-won slot so I guess I was just going to have to pull up my big-boy pants and tough it out. 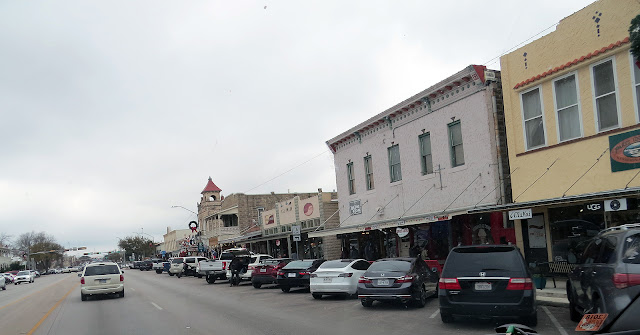 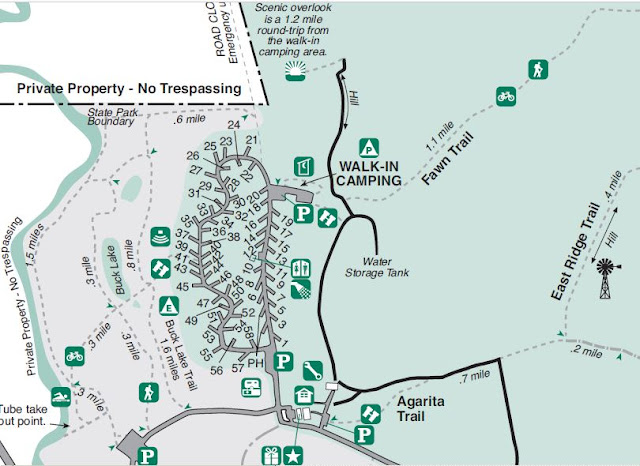 And, other than a handful of walk-in tent sites and 4 backpacking sites which aren't on the reservation system and don't appear to have been used in some time, the only camping is the 50 or so rather pricey ($20) water-electric sites which aren't my first choice. (But during winter camping it is nice to use some of that overpriced electricity to run a small cube-heater in the evenings - - -)
But this 2600 acre former ranch has it's own quiet, understated beauty, a peaceful dignity that comes from being what it is, no more, no less - not to mention a lot of solitary hiking! (I covered a shade over 56 miles on foot during this latest 5-day stay and encountered three whole people - which, now that I re-read that statement, kind of implies that there were some partial people too, which there weren't. At least none that I saw!)
Being located down on the edge of the river-bottom the campground is well treed and doesn't have any real solar-friendly sites, but then that's how I'm going to get value out of my 200 usable Ah's of lithium-ion batteries, so no big deal.
Walter Buck was 18 when his dad, also a Walter Buck, bought this ranch and moved the family from the Dallas area in the hopes that the drier climate would be good for Walter's  tubercular older brother. Unfortunately the brother died within a year but the Bucks stayed on, with Walter Jr. taking over the successful ranch when his Dad died.
Walter was quite the environmentalist and quickly reduced the 1000 head of sheep, goats and cattle by half and eventually he was down to 150 head of cattle as he focused on restoring the ranch's sustainability and natural ecosystem. He never married and in 1977, at age 85, donated the ranch to the Texas Department of Wildlife and Parks. It was opened as a State Park in 1990.
All of which is a long-winded way of saying this place is definitely worth a visit, or two, or, in my case five or six, so far.
The ranch is actually divided into two distinct habitats. The lower section (the north end) lies in the Llano River valley and these bottom lands support hardwoods, many of them pecan which allowed Walter to harvest some 60 thousand pounds of nuts per year. Then just behind the relatively lush bottom land rise the limestone ridges and canyons typical of the hill-country. It's much drier up here with a whole different set of plants, most of them pretty spiky.
I was still pulling hair-fine cactus spines out of my leg several days after getting back home. If that doesn't sound like your idea of fun stick to the established trails! 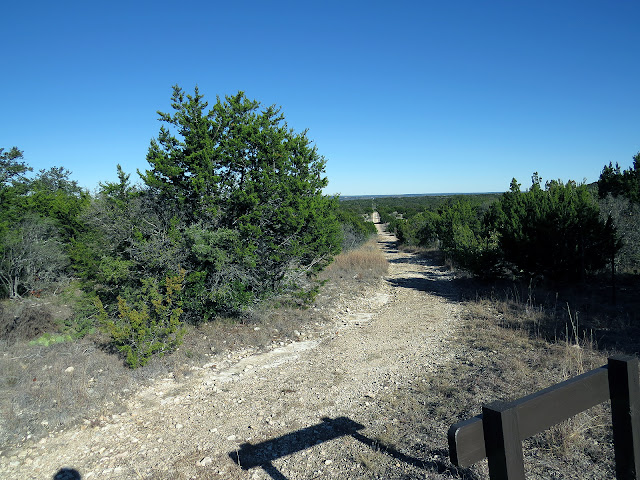 Speaking of trails, as a former ranch, the majority of the trails are old ranch-roads, or tracks depending on your definition of a road. This is one of them, along the eastern fence line, that is still almost road-like, with others maybe not so much. But still, none of them present any particular difficulties to even the novice hiker, other than maybe length, (A loop-hike to the far end of the ranch and back again will come in at about 11 miles) 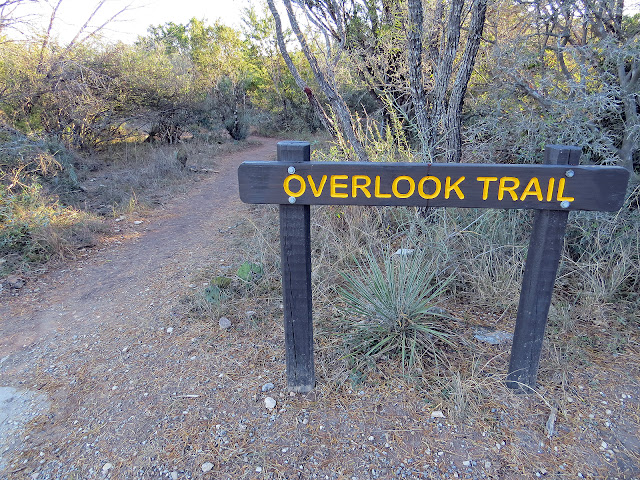 But there are a couple trails, including this one which is new since I was last here in 2017, 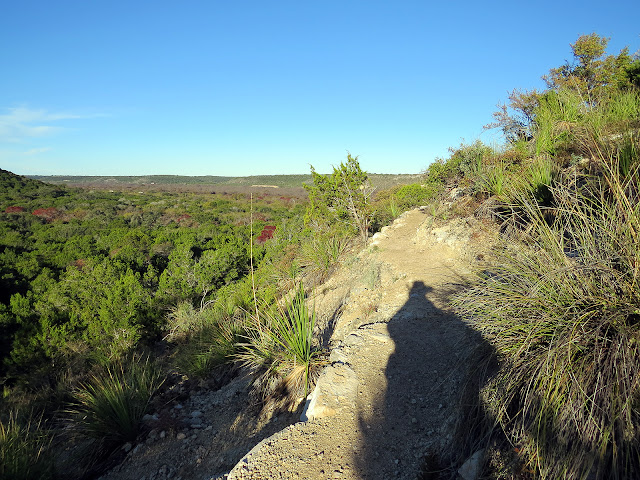 that are more conventionally trail-like.
Of course, as soon as I discovered this new trail, which isn't on the maps yet, I had to try it. But part way up to the overlook 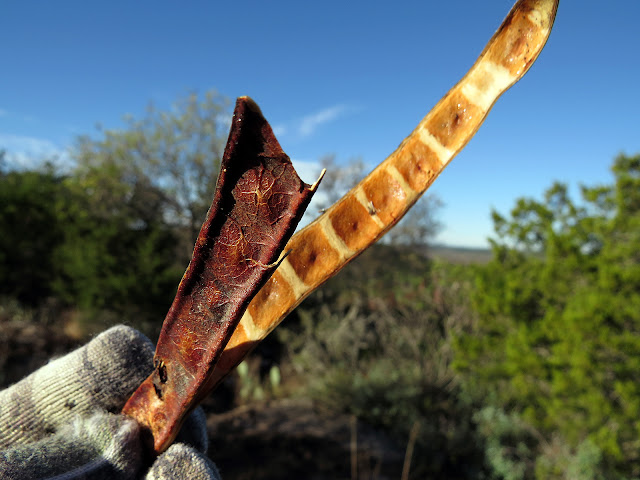 Oh, wait. I just scared the crap out of myself over an innocent Honey Mesquite seed-pod! 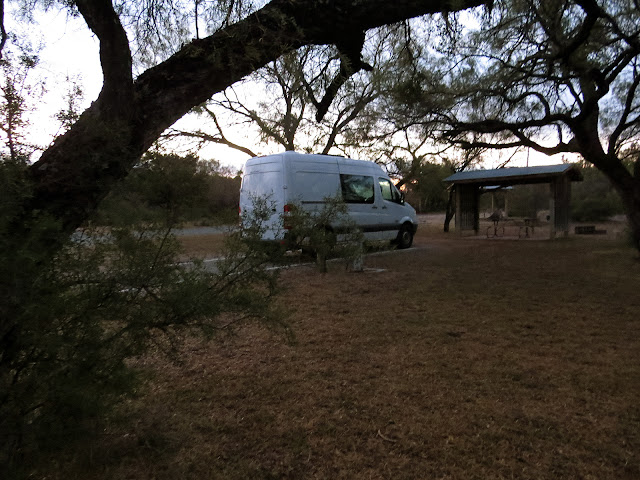 Well that was a good start to my stay here! But it didn't stop me! So there's some South Llano hikes coming up in future posts.