Scared the Bejeebers Outa Me! 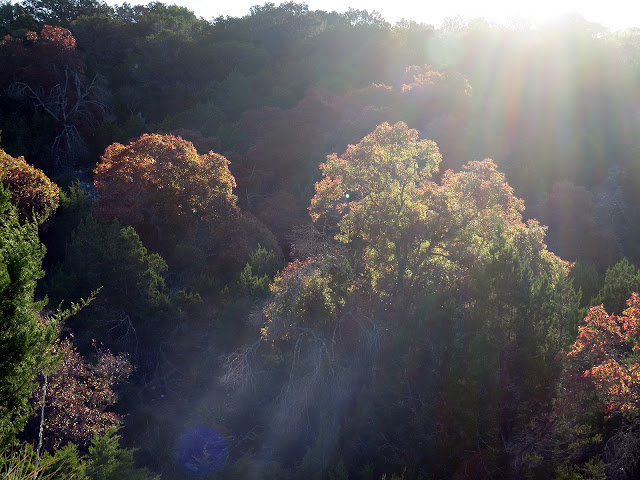 Last day of November and first morning of my South Llano trip.

Time for some hiking! 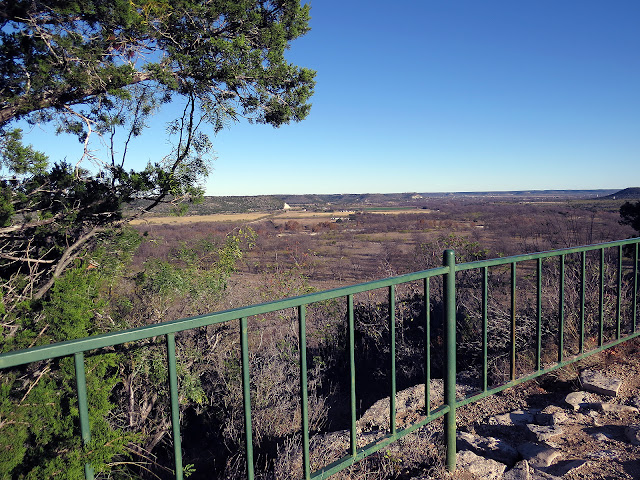 First on the agenda is a jaunt up the new trail for the obligatory stop at the scenic overlook.

Out there, just below the horizon on the left side, is the town of Junction, just about 5 miles away. Close enough that I can just barely see the endless parade of trucks passing out there on I-10.

That white pyramidical triangle near the center is a rock cut for the highway, US-377. Traveling southwest out of Junction, pop 2500, it runs along the far side of South Llano River for 25 miles before crossing to finally climb out of the valley, then runs another 20 miles across the ridges to Rocksprings, pop 1100.

Between the highway and me are the pastures and tree-groves of one or two of the working ranches taking advantage of the river and its valley.

Unfortunately, like farming, ranching is not a high-earning endeavor and many require the support of day-jobs to make a go of things. That means that this somewhat remote highway actually experiences the rural version of a rush-hour every morning, and though the campground is a straight-line mile and a half from the highway, the acoustics of the valley means that each one of those vehicles can be heard going by, especially when the air is cold and dense. But not to worry. Where I'm headed, back up in the ridges and canyons to the south, the only "highway" sounds are the skittering of feet running away from me. (They run away most the time but - well, you'll see) 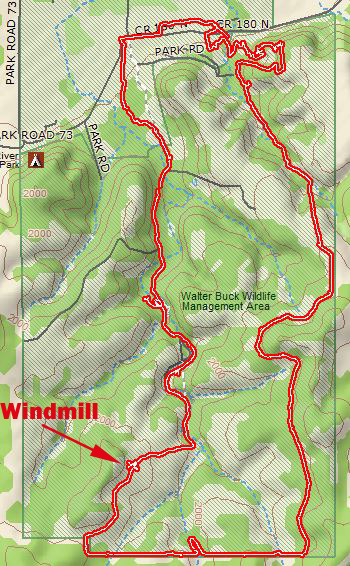 The plan today is to make a loop around the eastern half of the ranch, 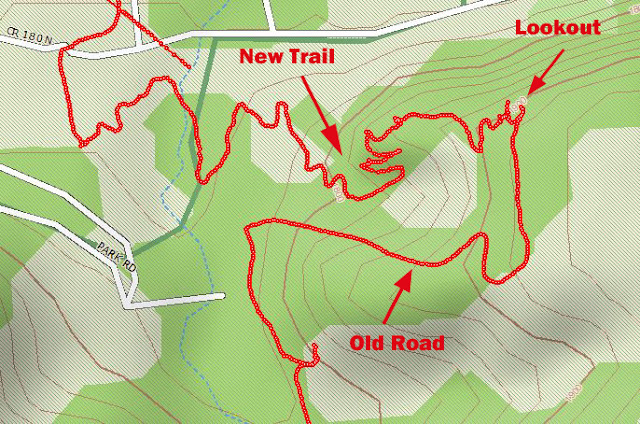 so after taking the new trail up to the lookout 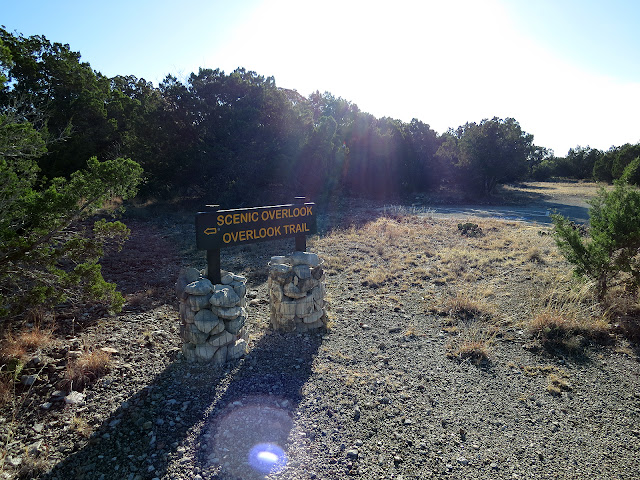 and lollygagging around a little, 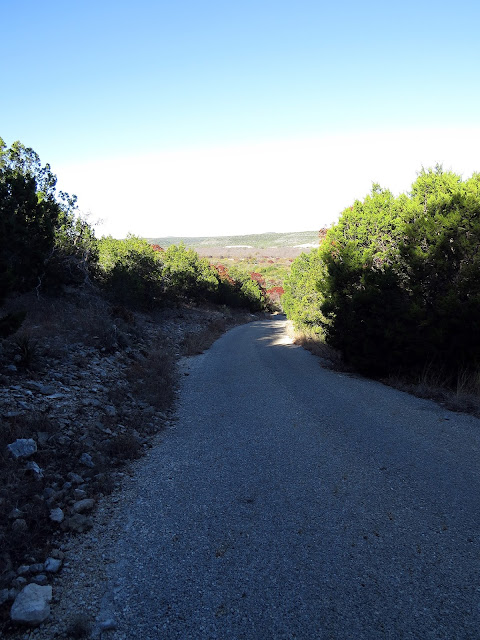 I toe-jammed my way back down the very steep old road (Cars have long been banned and now no bikes are allowed since the park staff have gotten tired of picking up the pieces of failed down-hillers. The busted-up bikes aren't too bad, but the busted up riders are just way to gooey and messy!) to connect with the Fawn Trail which will connect me to the East Ridge Trail which will connect - well, you get the idea. 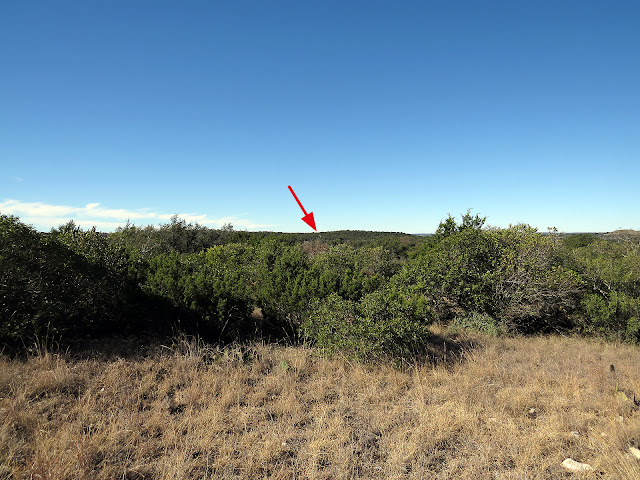 There is a point or two along the East Ridge Trail where I can look west and see my proposed lunch stop. It helps if you know where it is, but even then 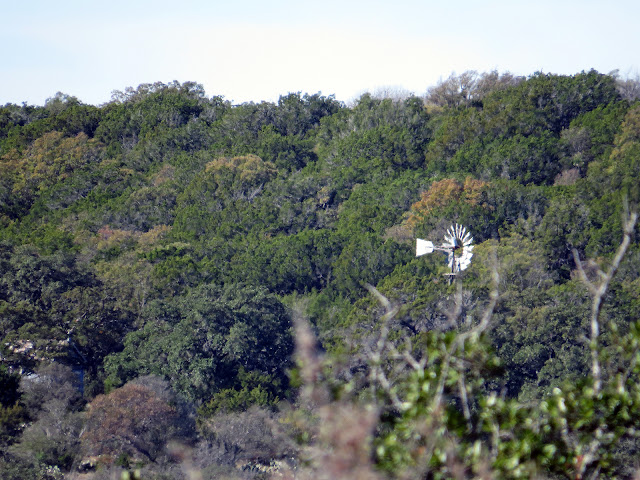 you might have to zoom in a little to spot the windmill poking up through the trees over there. 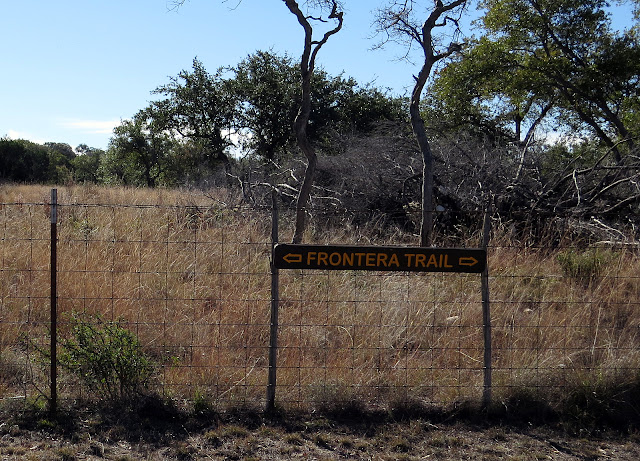 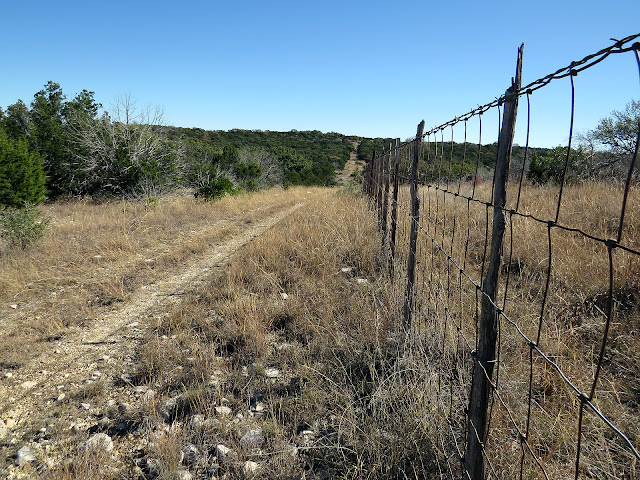 there at the southernmost edge of the park, and though "Frontera" may sound fancy to us gringos, in Spanish it just means boundary or border.
You might think walking a fence-line is pretty boring, and it may be to the ranch hand that has to patrol it several times a week for months on end, but out here, with no people, no man-made sounds, and plenty of wildlife and native plants to look at, I don't find it boring at all. 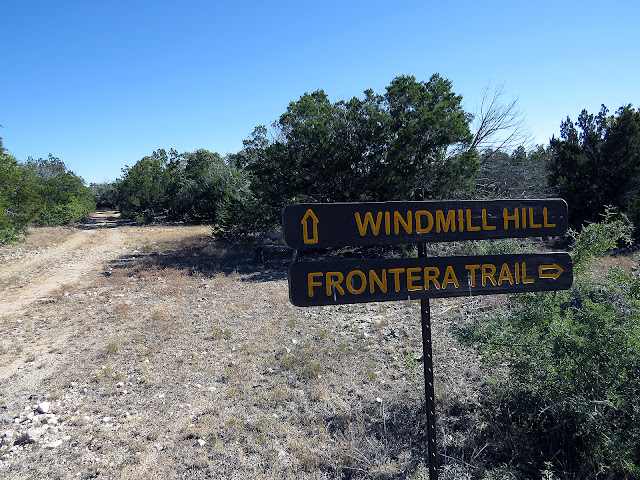 But eventually it's time to leave the fence-line behind and track along the western ridge of Mid Canyon towards the windmill.
Good thing too because I'm starting to get hungry! 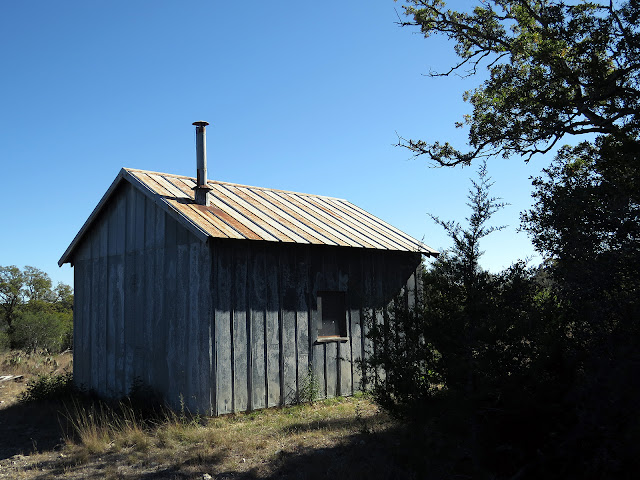 Adjacent to the windmill is a small 20th century (judging by the look of the concrete slab it's sitting on) building that may have once been used as a line-cabin by ranch-hands. 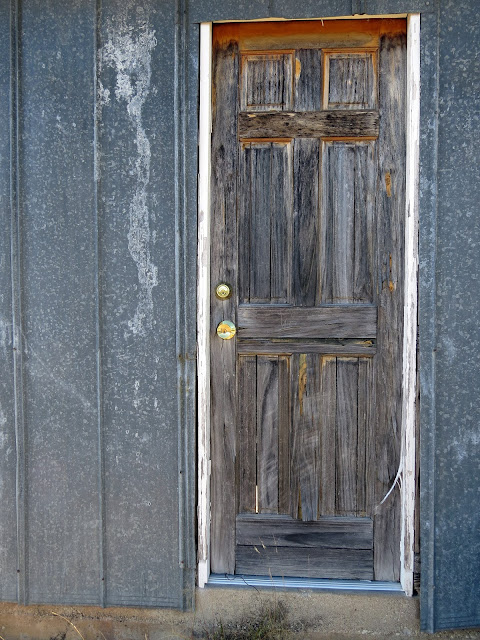 Now days the solid wood paneled door is weathered to the point where some of the panel-seams are showing daylight, (you can see one of them in the bottom left corner) but the door, along with it's more modern lockset, are still holding strong and doing a good job of protecting the empty building. 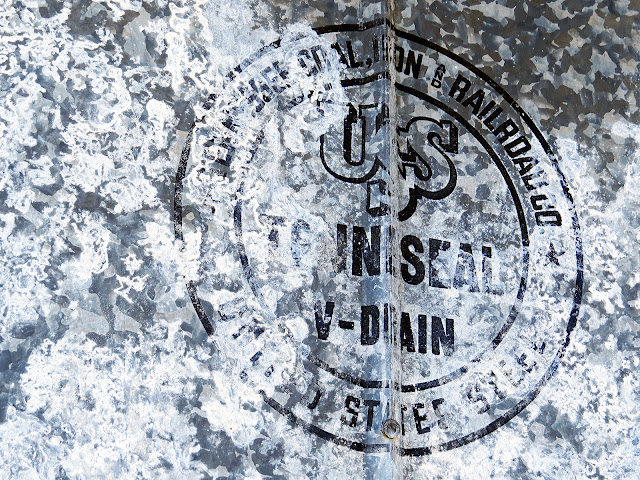 Unfortunately, when I took this photo of the markings on one of the steel sheets covering the sides of the building I was more focused on getting to my lunch than what it said and didn't realize that part of the logo would be unreadable in this photo. I get the coal, iron, and railroad part of this division of US Steel, but can't quite get a handle of that first word that ends in sser, or maybe it's ssee.
Somehow, I doubt it's crossdresser or fricassee. 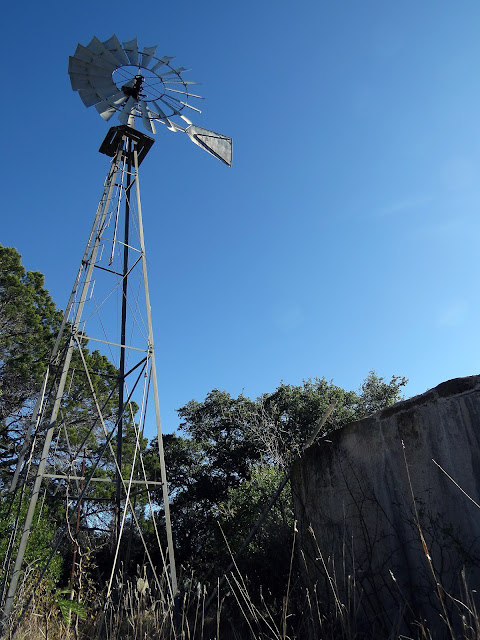 Heeding the urgent calls from the brain in my stomach (In 2010 it was discovered that the stomach has neurons, the same kind of cells that make up the brain, which kinda makes sense since for the primitive early forms of life here on earth nutrition was more important for existence than the existential angst of figuring out why we exist. So it turns out that a "gut feeling" may actually be your first brain calling in!) I cast around under the windmill for a good lunch spot. Sheltered, well off the trail just in case I wasn't the only one wandering around out here, (I was) and comfortable. 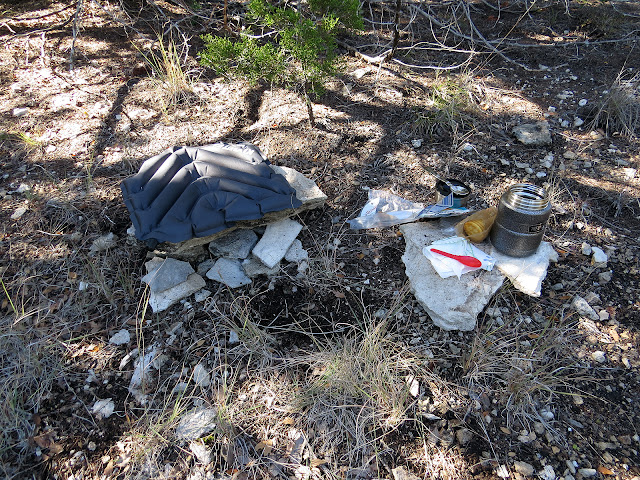 To quote Meatloaf, two out of three ain't bad, but there's a decided lack of large logs up here for comfortable lounging while staying up off the prickly stuff on the ground, so I had to build a little throne and table for myself out of local materials. (Before any of you go all eco-rad on me, when I was done I put the large rocks back where I found them and scattered the small ones, making sure they landed right-side up to blend in as if I'd never been there.) 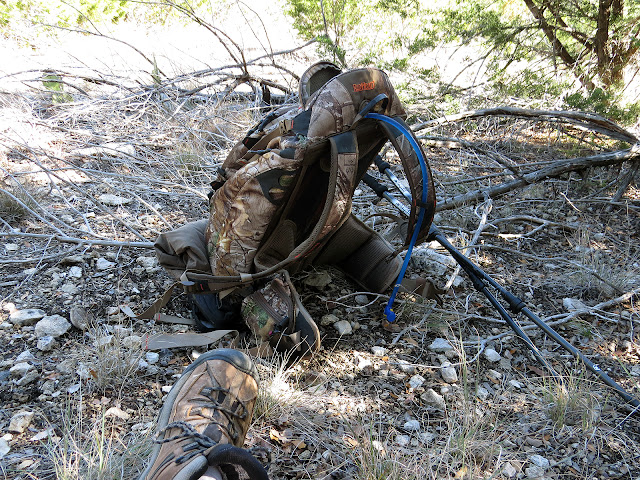 So there I was, miles from anyone and tucked in out of sight of the trail where I wouldn't be found until the-stink-got-bad, nothing but the near silence of nature around me, enjoying lunch with my pack propped up nearby when - 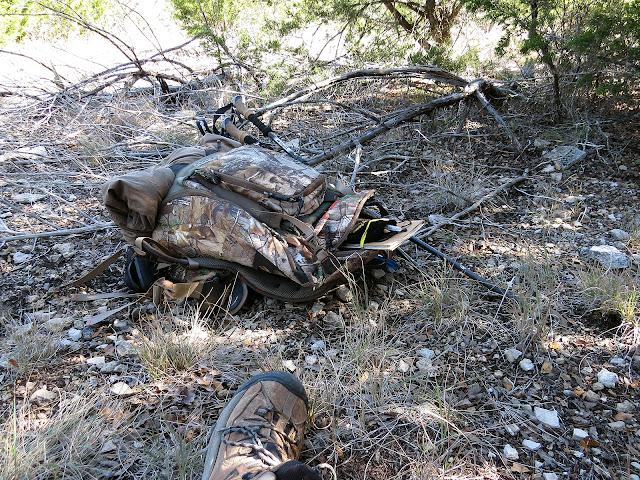 while concentrating on digging out the last morsel of tuna from the foil packet with that tiny red spoon, I heard a rustling pretty damn close by and at the same time, out of the corner of my eye saw, something lunge at me!
My first heart-pounding thought was of a deranged armadillo coming after me, or maybe that possum I live-trapped out of the barn last week and relocated to the back of the property had come back for revenge, and here's me with nothing but a tiny little red plastic spoon to fend off the attack!
It's really difficult to get me to make any audible noise - just ask The Wife when she's trying to get me to actually talk, you know, out loud - but in my head I squealed like a little kid - - - which certainly didn't do my manly self-image any good - - -
OK, so turns out it was actually nothing more dramatic, or dangerous, coming after me than my pack falling over - but still, it  scared the bejeebers out of me! 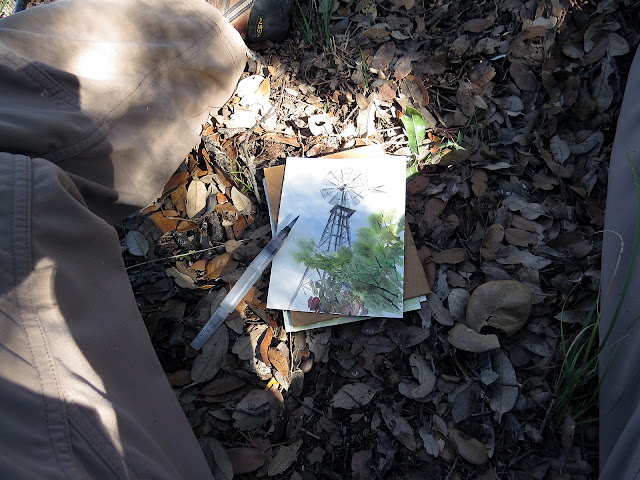 When my pack fell over it neatly spit my trail-painting kit out the open top-flap, so since it doesn't hurt to appease the gods of the trail once in a while, especially when they are clearly already screwing with you, after I finished up lunch I did a quick painting right then and there.
Now - anyone seen some stray bejeebers wandering around? I seem to have lost mine - - -