Splitting the Shift and an Incomplete Hike 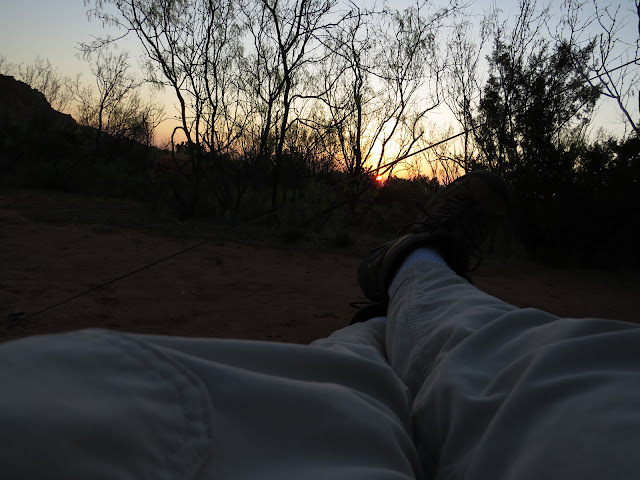 As I was greeting the sunrise today (Apr 26) from the comfort of my camp-chair I got to thinking about the rut I was in.

Not that I felt there was anything inherently bad about my rut! In fact I'm perfectly content with my rut. But there are those that say stepping outside your comfort zone, outside your rut, once in a while, is good for you.

Now I am definitely a morning person and by late afternoon/early evening I am typically settling down for the night, but this morning I let that "rut" stuff get inside my head and began wondering what I was missing out on by not taking a late-day hike once in a while.

Transit workers often work split-shifts. They put in half their hours during morning rush, are off through the middle part of the day, then finish their day working the evening rush.

Not sure what got into me to knock me clean off the rails of my rut (Yeah, mixed metaphors, but I can live with it.) while I was so comfortably kicked back there in my chair like that, but right then and there I decided to work a split-shift today by taking a modest hike this morning and then another one near sunset. 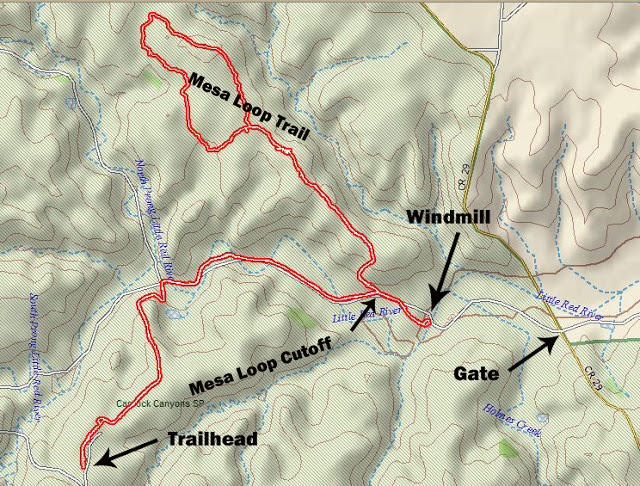 The Mesa Loop, the lolly-popped upper half of the track above, seemed like a good candidate for a modest hike.

The loop doesn't connect with a road anywhere, but if I used The Van to get myself up to a closer trailhead than here at camp I could save about 6 miles of hiking, (Hey! I'm not a complete idiot! - - - though I guess that makes me a fractional-idiot - - - ) turning this hike, after adding the one-plus  mile out and back to the boundary gate at the county road, a bit of trail I'd never been on before, into 9 mile morning stroll. (It turned out to be a 7.5 mile stroll for reasons you will see soon enough.) 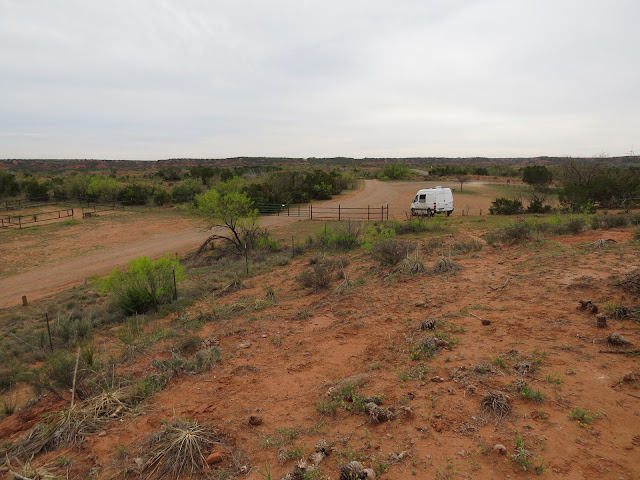 So that's how it came to be that I finished up breakfast, fired up The Van, and a few minutes later left it in the overflow area just outside the gate to the now deserted horse camp 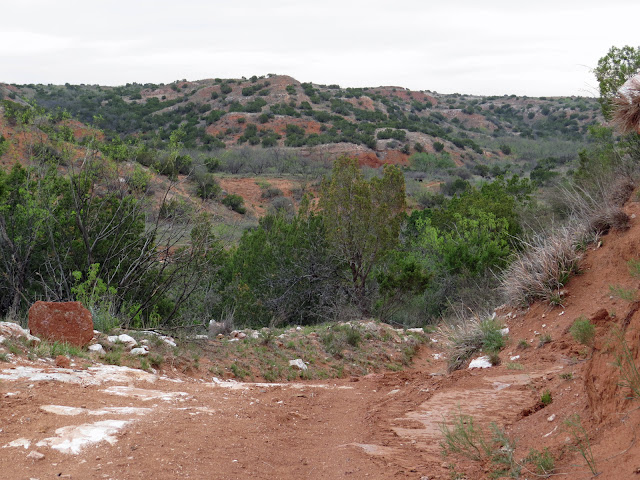 and started hiking down into the canyon that I needed to cross before reaching the mesa rising up there on the other side.

My plan was to get down to the canyon then initially bypass the Mesa Trail cutoff so I could first go check out the gate out there at the county road. That way I wouldn't be tempted to use the excuse of tired old legs to chicken out on this little side-excursion, as might happen if I left it until after doing the Mesa Trail. 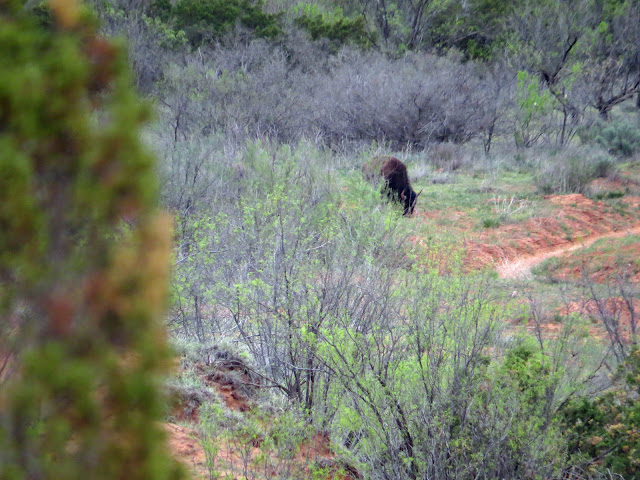 But even before I hit the canyon floor there was a problem with that plan. You know, the furry kinda problem with very real horns and a bad temper. 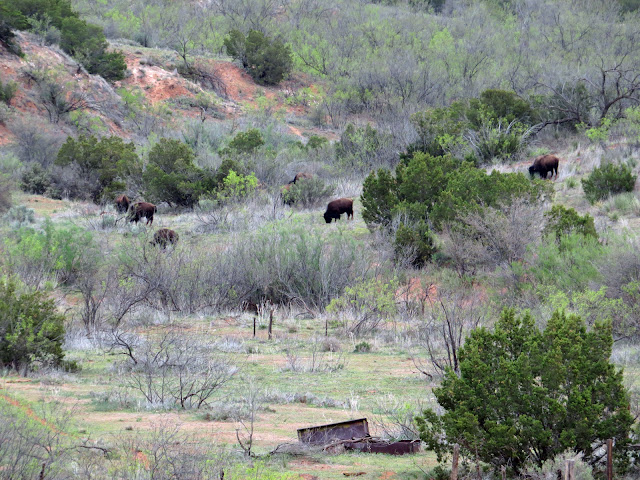 In fact, as I got a little closer I could see that there were several problems with my plan.

Now there are some that would say "Oh heck, they're just like cows. What's the big deal?!"

But those people have no idea what they are talking about. (Besides, have you ever been on foot in a pasture full of angry cows? I have and it's not fun!) The truth is, unlike cows which have been domesticated for thousands of years,  Bison have only been fenced in for just over a hundred years and are still wild animals.

Bison are to cows what coyotes are to yappy little Fifi.

We have a large ranching operation near home and they run a fair sized Bison herd on part of it. You never see the ranch-hands, who will wade on foot into a herd of cows without a second thought, anymore than a couple steps from their trucks or horses when working the Bison. And these guys are around these barn-born and pasture-raised Bison every day.

The Bison here in Caprocks are not barn and pasture animals! Within the boundaries of the park they live their lives pretty much the way their ancestors did. (The range managers move them around by turning off select water supplies while turning others on to encourage the herds to move to different areas.) Wild and free and defending themselves and their calves from predators - like bad ol' me. 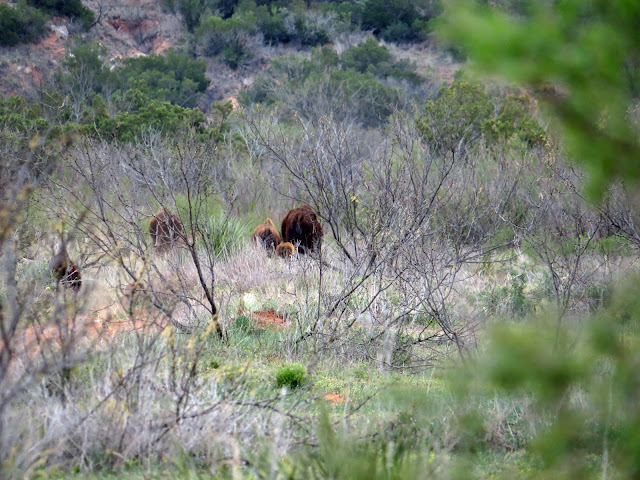 But then it began to look like all was not lost as they started moving away from me, 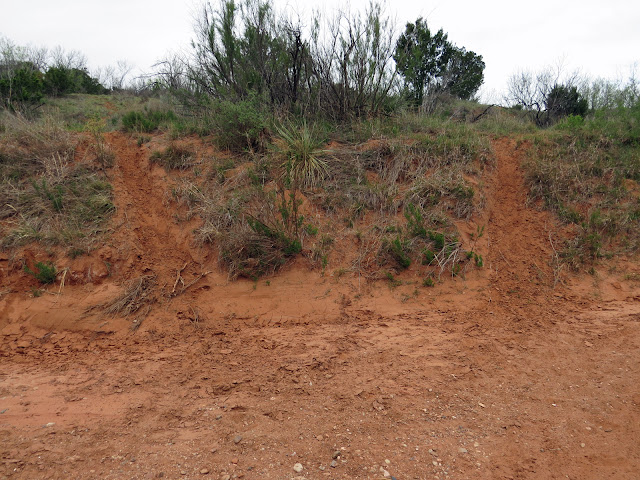 leaving their mark as they crossed 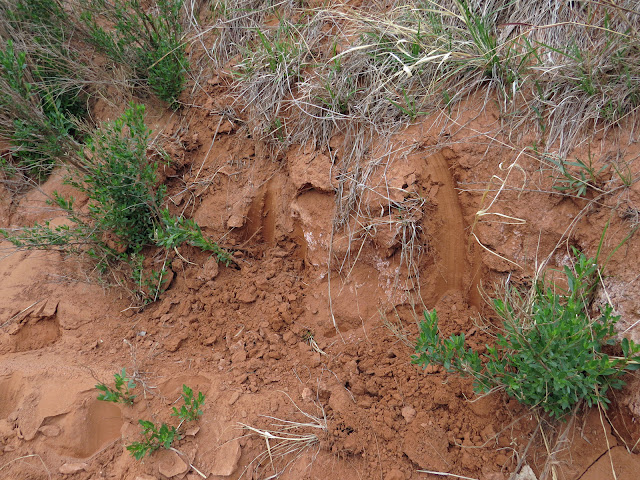 a couple meanders of the river as

they vacated the trail so I could continue on as per my original plans. 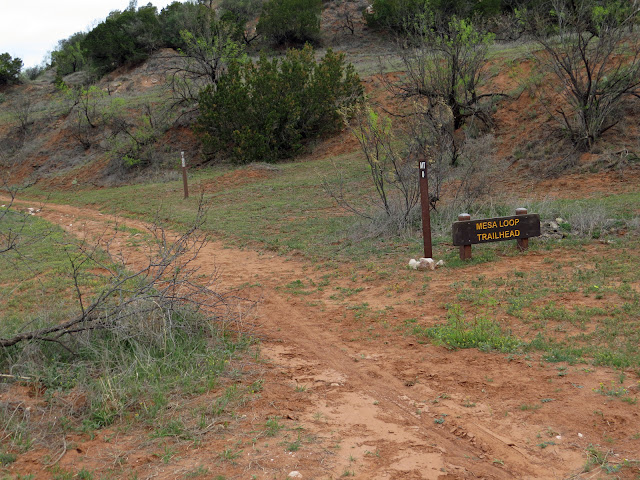 They cleared the way out as far as the cutoff to the Mesa Loop and I thought maybe I could make it all the way to the gate after all, so I kept going. 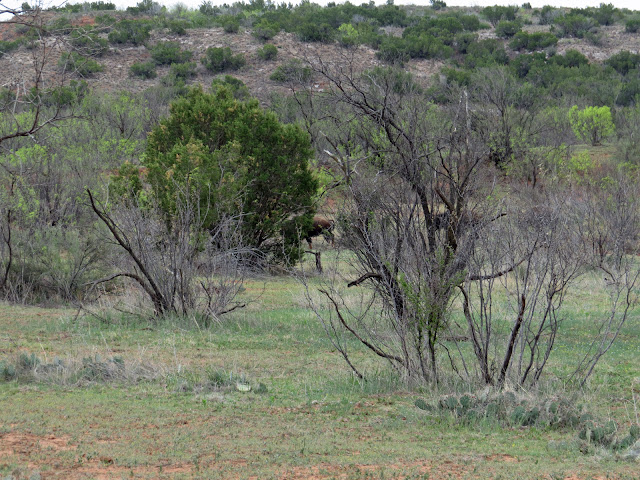 I began to notice ghostly shapes out in the brush flanking me to the right and left. 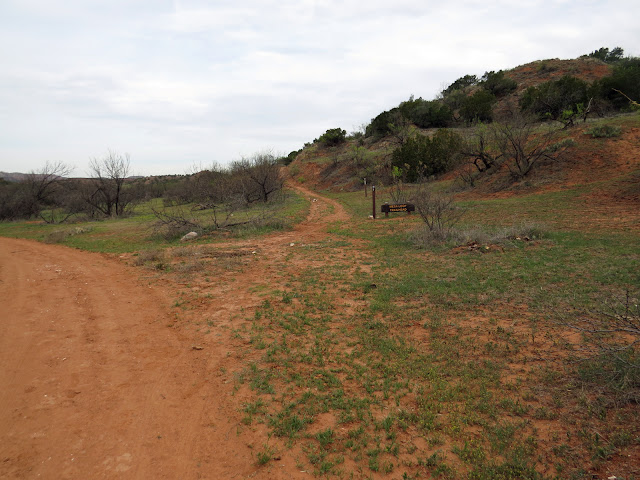 At this point I decided the better thing to do was to come back for the gate later in the hike, tired or not, and, for now, return to the Mesa Loop. (The advantage of decision making by a fractional-idiot rather than a complete idiot!) 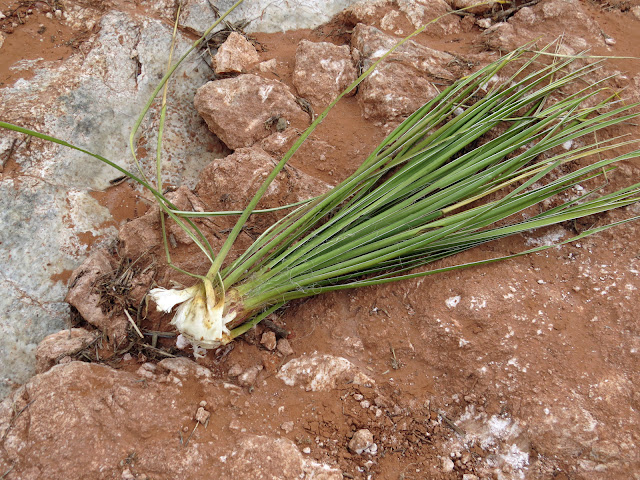 As I started up toward the mesa I had reason to wonder if Bison kids are as sneaky about hiding  their vegetables rather than eating them as human kids are. 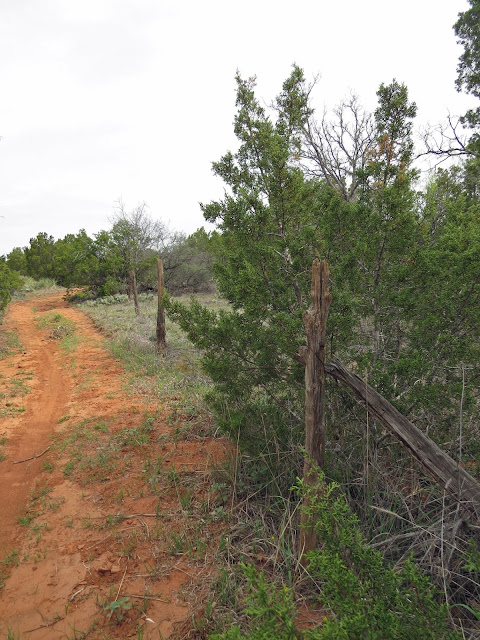 Up on top of the mesa is a network of old fence-lines revealing that livestock were regularly run up here sometime in the past. 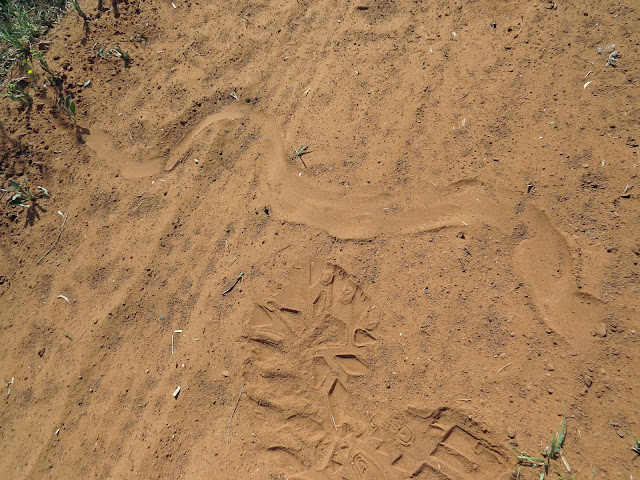 And very recent tracks speak of a different kind of inhabitant that is still running, or rather sliding, around up here! 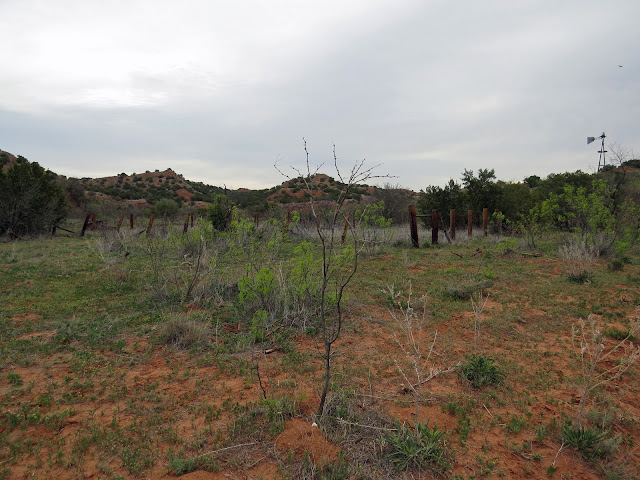 After making the loop and coming back down off the mesa I didn't see any bison lurking around in the bottom of the canyon. And believe me, I was looking!
So I hung a left and once again headed down the trail towards that gate.
As I approached one of the old livestock handling areas near the river the coast was still clear, 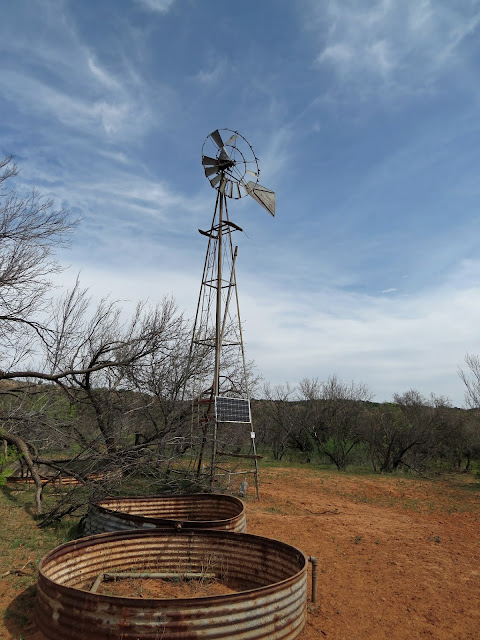 and I went around to the other side to check out the solar panel, which is new since the last time I was here. 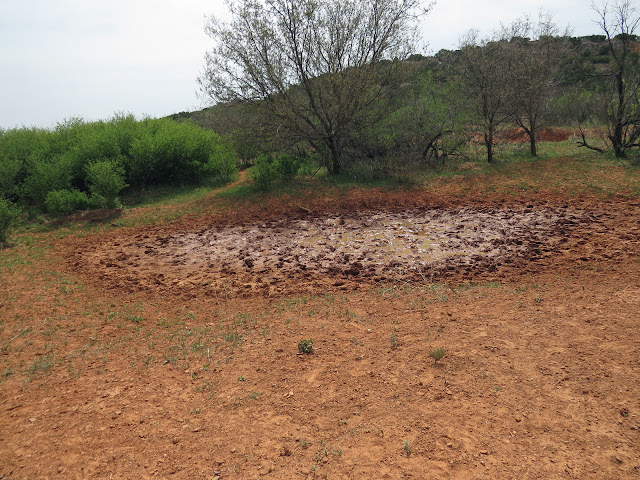 It appears to feed a pump down in the old well that, if working, which it wasn't today, pumped water out a pipe and down into this low area.
You see that bit of raw earth in the top-right background? That's the far bank of the river and just beyond that is the intersection with the Canyon Rim Trail that comes down from Honey Flats where the main campground sits.
Just beyond that intersection is the half-mile of trail out to the gate. My current destination. 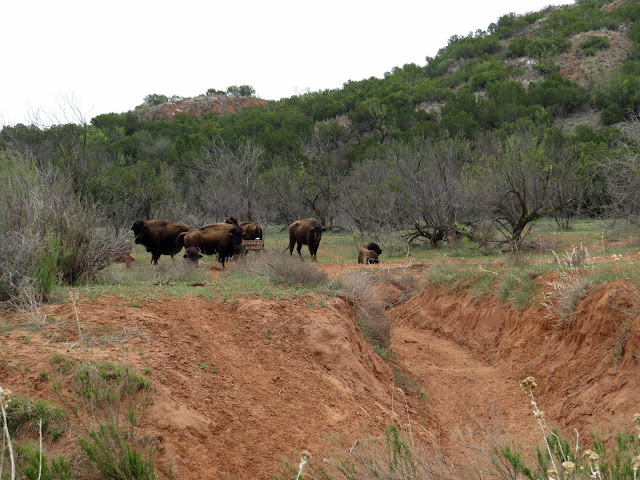 OK
Maybe not!
Seems that a portion of that Bison herd has now bedded down, literally, right on top of the trail-intersection over there. (See the trail sign right in the middle of them?)
When I stood and watched for just a little too long a couple of the protective moms started my way with tails raised - never a good sign -  and I decided the gate was just going to have to wait for another day.
I turned around and headed back in the direction of The Van at, for me anyway, an uncharacteristically brisk pace.
Stand by for part 2 of my "split shift".
Posted by greg at 3:48 PM