Blowing Out The Old Year

OK, first day of a new year. A time when we tend to focus on new beginnings, on the promise of the future. 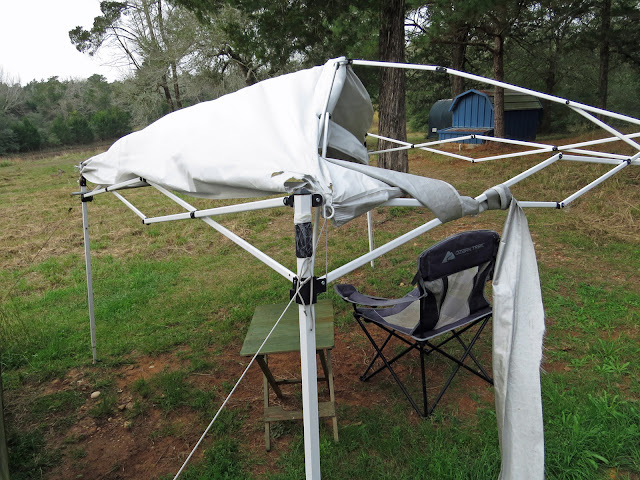 and around here it didn't go quietly!

As midnight approached the south winds roared through our little enclave here. Whether in celebration of the arrival of the new, or protest at the usurping of the old, I don't know.

I do know that they paused long enough to shred my canopy. My summer man-cave. The place where I spend an hour or two most summer afternoons working on my Spanish, or a Sumuko puzzle, or reading a few pages of the AARP newsletter, or just hanging out absorbing the view across the pond.

Normally by now this canopy has been taken down and stored until next summer's heat makes the tin-can of The Van an untenable hangout again, but this year we recorded the hottest December since the beginning of keeping track of such things. In fact, as I stand here near the open doors of the barn writing this at 0930 January 1 2022 the thermometer beside me is reading 76 degrees and I can hear that The Wife has turned on the air-conditioner inside our living quarters. Anyway- that's why the canopy was left up longer than usual this year. 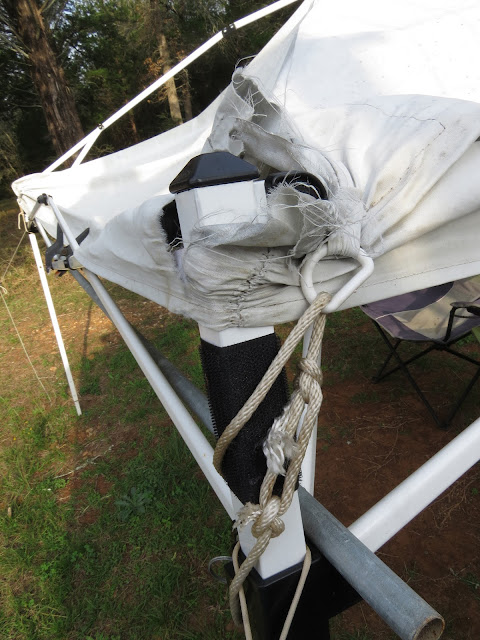 I'm not really bothered by the blowout. In fact it's almost welcome.

I'm one of those people that carefully peels that last sheet of toilet paper off the cardboard tube so it doesn't go to waste, that folds and refolds sandpaper in order to use up every square inch that I've paid for. In short, I'm compelled to squeeze out the very last drop of usefulness before discarding anything.

This is the second cover I've had on this canopy frame and it has clearly been in the twilight of it's life for a while now. The hook-n-loop that holds it to the frame has failed so it's been tied down with some scraps of clothesline instead. The sun has baked the fabric crispy and brittle, resulting in lots of little tears around the corners and leaks all over. But up until last night it was still performing, somewhat, as a shelter from sun and rain.

Now, finally, there is no ambiguity. It's time to discard the old and move on. 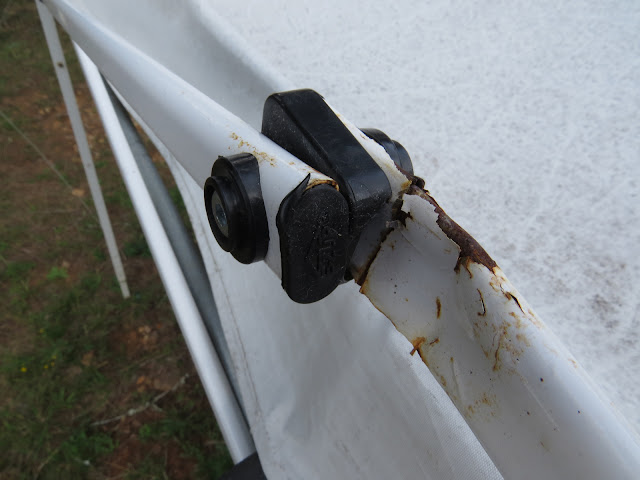 In fact, the frame itself has also failed with a big kink that is nearly a complete break, currently shored up with a length of EMT and a spring-clamp.

So I can finally, in good consciousness, retire this long serving and well used canopy, frame and all, for good. (I already have the replacement canopy, an even sturdier version, ready to go for next spring.)

But I better stop writing this and get a move on taking it down. Because, expected to be even stronger than last night's south winds, north winds are coming in the next few hours, and they are going to be blowing in freezing temps by tomorrow morning!

Out with the old as we move forward into Tomorrow!!