You can't pee in the shower in January with a broken water heater!

(everything is just too clenched up) 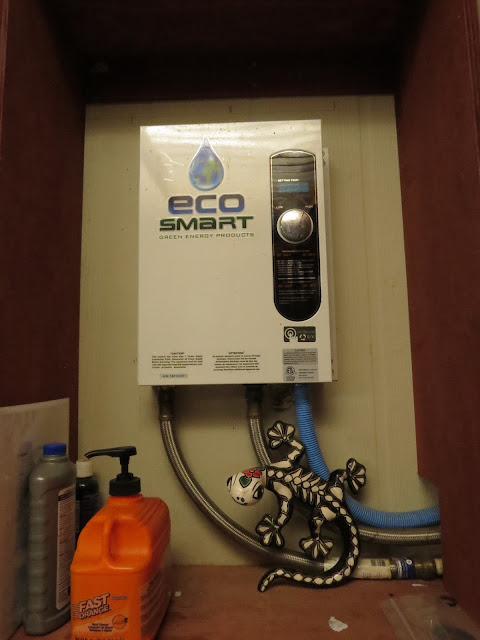 Ahh, we do love our conveniences.

And for most of us hot showers have long since morphed from a luxury to a "necessity", a God-given right, that we don't even think about anymore - until they aren't - - hot that is.

Our hot-water needs, The Wife and I, are modest. In addition to the shower (NO BATHTUB! What a resource-wasting, disgustingly unhygienic, and inherently unsafe way of trying to get clean!) our hot-water usage is limited to a vanity-sink, kitchen-sink, and washing machine, and since there's just the two of us rarely are any two of these going at the same time for more than a handful of seconds. So this relatively small 18kW tankless water-heater mounted out in the barn just above the washing machine serves us just fine. (We don't have a propane system in the barn so use electricity for water heating.)

Well - I should say it served us just fine right up until the other day. A day when some adrenaline-producing, flight-response triggering, high-pitched shrieks blasted out of the shower at ear-splitting decibels followed by a series of hoots that would make any chimpanzee mother proud! (I won't tell you which of us was the source of this embarrassing racket!) 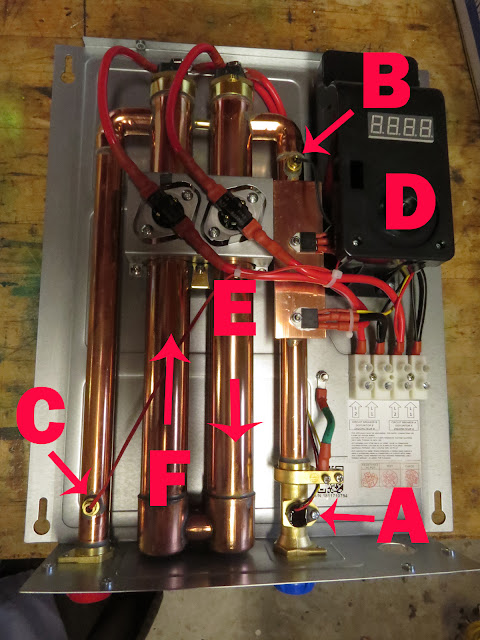 It - the water heater- is a relatively simple device.

Cold water enters through a flow sensor at A, goes past a temperature sensor at B, which works in conjunction with the outlet temperature sensor at C to modulate the heating elements to get the water up to the temperature called for by the setting dialed in on control box D, before it heads to the various faucets - in our case none of which is more than 20 pipe-feet from the heater.

In between the two temperature sensors the water flows down tube E past one heating element and up tube F past a second.

A significant shortcoming of this unit, in my opinion anyway, is that, rather than modulate the power to the two elements evenly, it's not until the control-box has cranked up the first element, element E, to its max before it starts to add additional power, if necessary, to element F. Don't get me wrong, for producing the desired water temp this works fine, but it does mean that element E gets used a whole lot more than element F, and this uneven distribution of load 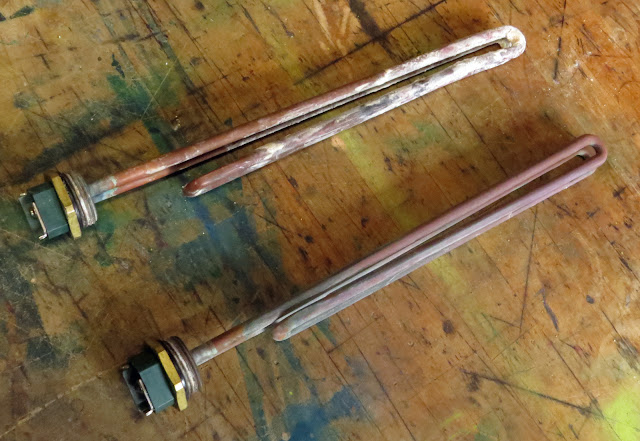 can result in element E, the one on the top in this photo, burning out before it really needs to. (We installed this water-heater in early January of 2012 so it took almost exactly 10 years for this to happen.) while element F still has a lot of life left in it. This unevenness of use is especially evident with our very hard water which produces a copious amount of scale when heated. I already knocked most the scale off element E before taking this photo, but the lower half of the element was completely packed with scale, to the point where I had a tough time getting the element out of the tube.

Oh, and I hadn't done anything at all to clean up element F, the one on the bottom, of this photo. This is the way it came out after 10 years of use.

By the way, however it handles power to the various elements, I do not recommend tankless water-heaters that only have a single temperature sensor on incoming water and rely strictly on that, the detected flow-rate, and an algorithm to produce the proper output temperature. We originally had one of these and it never was predictable enough to trust. (It only lasted 7 years and I wasn't particularly devastated when it got bad enough to replace.) 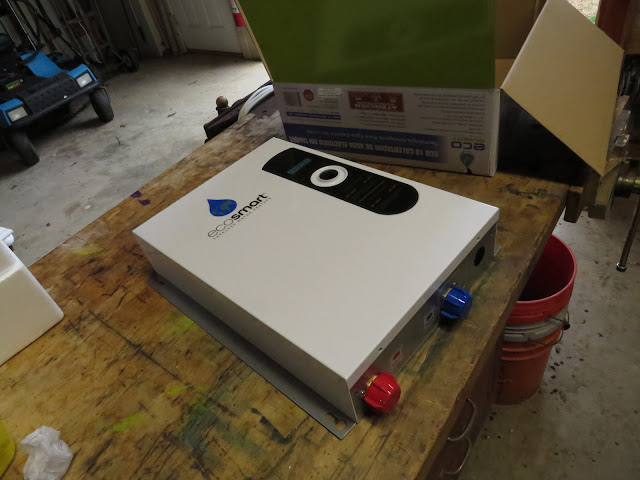 Since nobody, even in the city, had a replacement unit on the shelf we had to wait a few days for one to be delivered to our local hardware store, which is 30 miles away.

In the meantime, since the control box obviously isn't capable of detecting a failed element and compensating for it, we limped by on tepid water by cranking the temperature control on the failed water heater up to max which fooled the box into sending more power to the one working element. 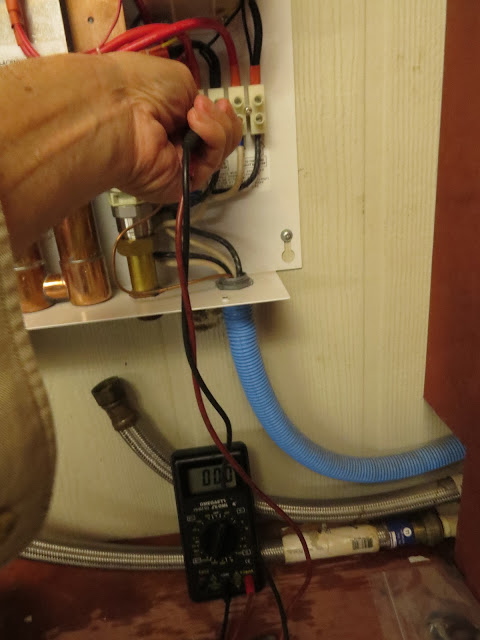 But even in our mild climate, tepid in January is none too comfortable, so as soon as we had the new unit in hand the replacement process was under way.

After turning off the two 40 Amp breakers that feed this thing and knowing there was no power to the box, I double-checked with a meter anyway - because 240 Volts - twice - is nothing to screw around with, 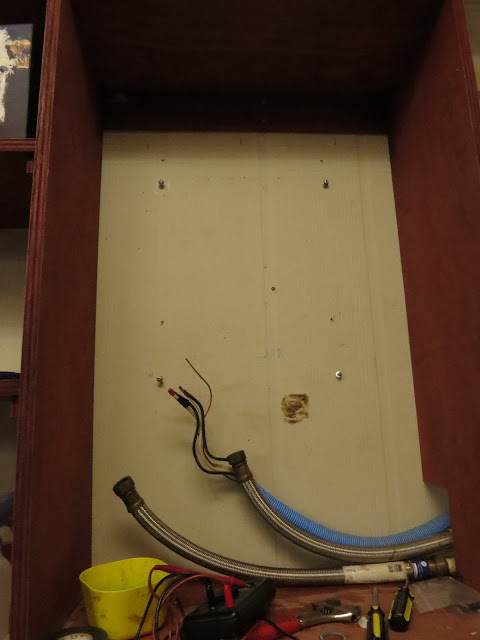 and a couple of minutes later had the plumbing and wiring disconnected and the old unit removed. 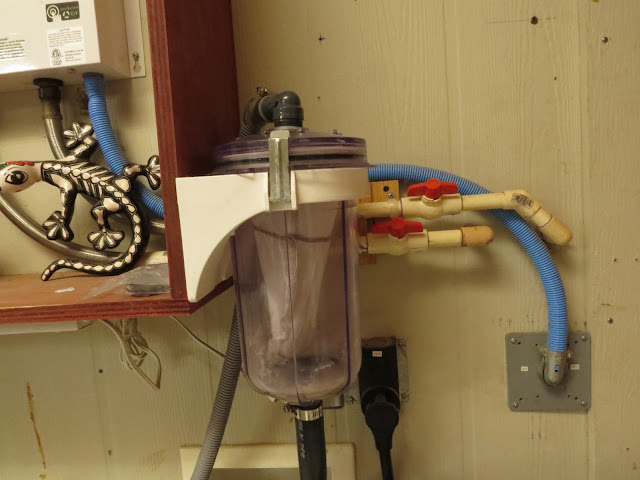 Doing this with a minimum of disruption to the rest of the plumbing was facilitated by having shutoffs on both the cold water side (the upper valve) and hot water side of the heater. (It's not a hot water heater! If the water was already hot no heater would be needed. The only hot water heater in most of our homes is the element in the bottom of the dishwasher which is used to heat hot water up even hotter.)

Even to this day many local building codes still only require a shutoff on the cold side of the water heater. This may have been fine back in the days of two-handled faucets, but today's single-handled faucets with their shared-valves turned to somewhere between cold and hot can feed cold water back the wrong way down the hot water side if there is no shutoff on the hot water leg.

(That big canister there in the middle of this photo is the filter on the washing machine's drain. We have a septic system and feeding all those inorganic fibers from clothing, or even the somewhat organic hairs from The Wife's rescue cat's rugs, through that system is not a great idea. Instead we just periodically pull the filter-bag out of this canister and dump the contents into the trash.) 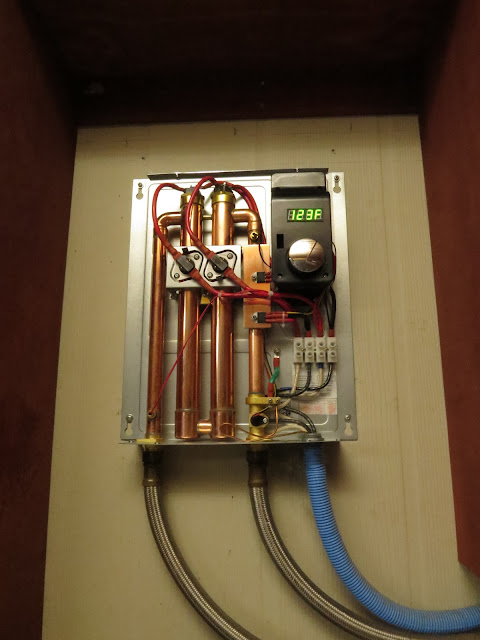 Because it was an exact replacement, a few minutes after the old unit was out the new one was in, hooked up, the breakers were closed, voltages were check, and it was operating. 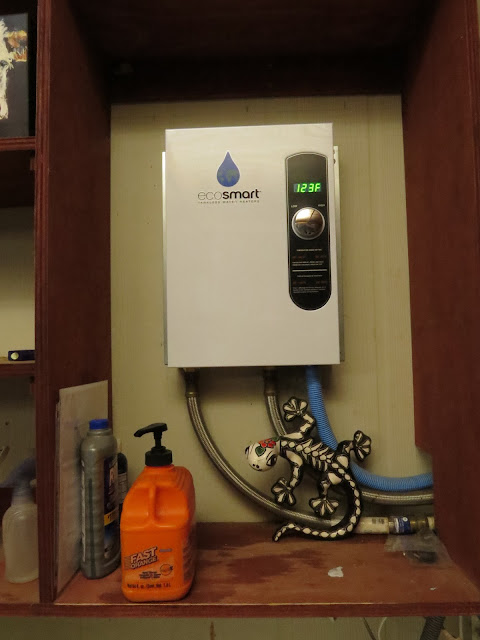 Once the cover was on and things put back into place it was like that whole horrible event never happened!

So what about the old water heater?

Well it has since been carefully de-scaled and a new element installed - for about 10% the cost of a whole unit.

Now I won't have to worry about that anymore. The old unit has been boxed up into the packaging the new one arrived in and put on the shelf to gather dust and provide peace-of-mind.

Assuming the new unit runs failure free for the same 10 years as the old one that works out to less than $40 a year for some peace-of-mind, and when you sum up the annual cost of auto, homeowner, and medical insurance we pay for, that $40 works out to be a very small part of what our other piece-of-mind costs are.

Yes, it is an extravagance, almost to the point of being embarrassing, but I worked my guts out, 60 hours a week, for several decades and in doing so have been blessed with the means to afford such treats, and I'm slowly learning to take advantage of that.

In the meantime, boy is it great to be able to pee in the shower again!!!