After a pretty full weekend it was probably a good idea to give Mom a rest-day before dragging her out again on Tuesday's planned excursion, after all she is working on her last year as an octogenarian and we don't want to damage her right before the upcoming reunion.

And, again, being a Monday, those that weren't unemployed retired had all gone back to work.

That left the one sister and me. 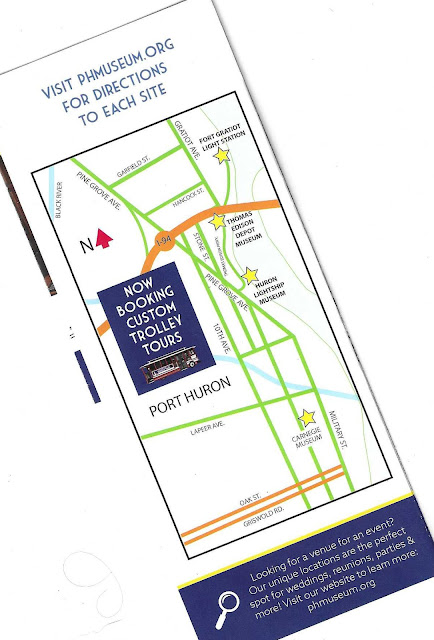 Not really wanting to sit there twiddling our thumbs, and armed with the knowledge that all the St. Clair county museums are entry-fee free this year due to a corporate donation, 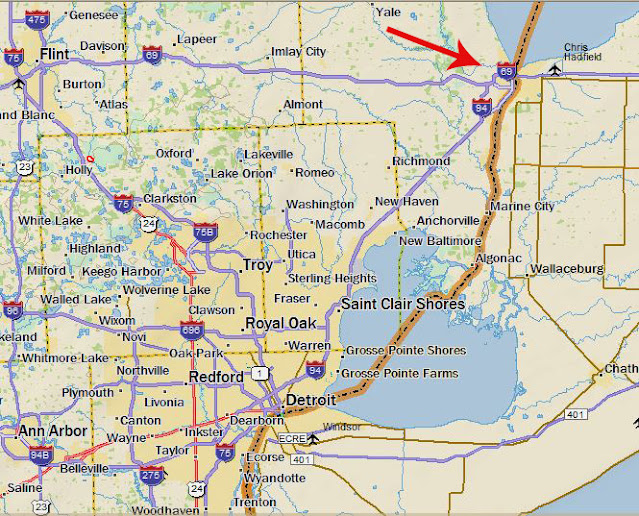 we jumped in the car and headed for Port Huron, up there at the red arrow. 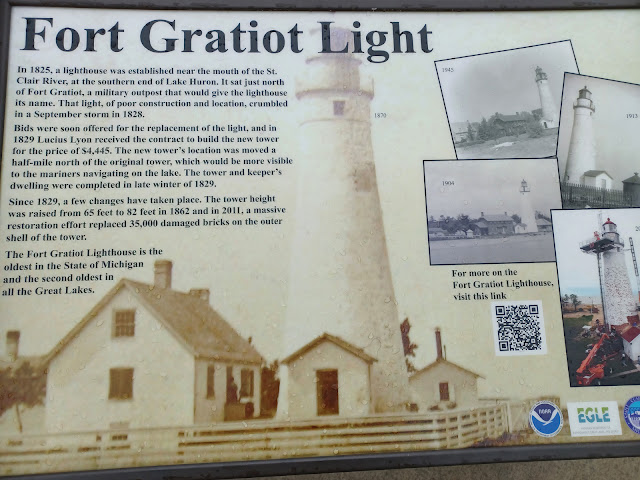 Working our way from north to south, our first stop was the Fort Gratiot Light House right there where Lake Huron bottlenecks down into the St. Clair river. Kind of an important place for the lake-freighters to know right where they are! 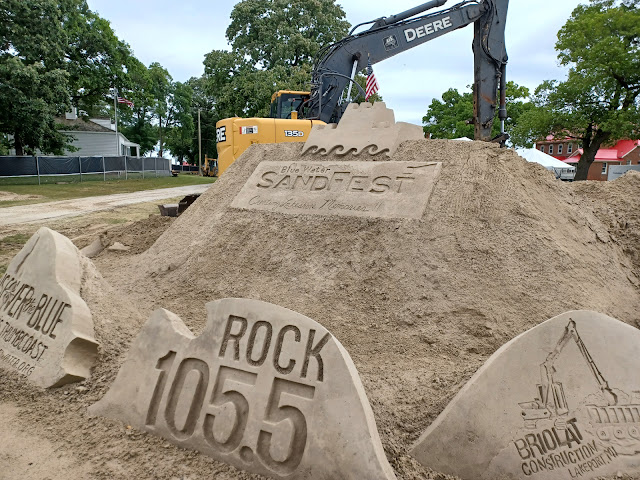 Parking was a little limited.

Not because of crowds, but because the annual Sandfest had just wrapped up the day before (Whew! That was lucky! - you know, that we missed it!) 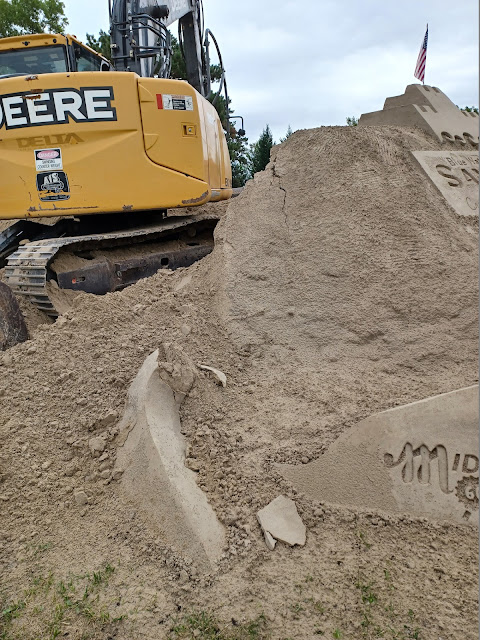 and now crews were busting up the sculptures and loading all the sand back into the dump-trucks that would haul it back to where they stole it from while other crews were dismantling all the tents that had been set up for vendors.

This didn't leave a whole lot of room for casual visitors to park but we squeezed in anyway. 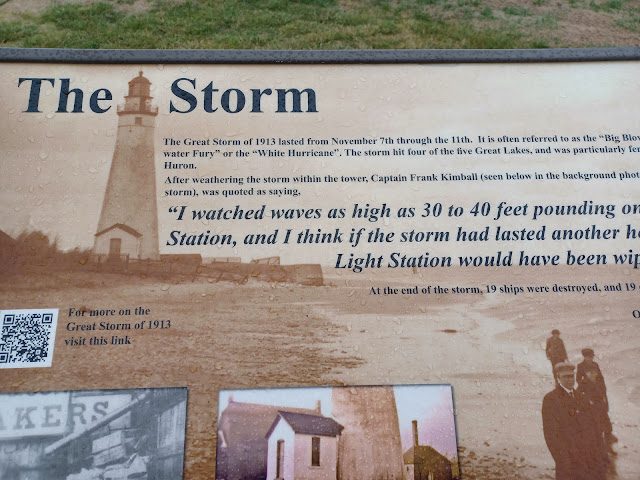 Not really wanting to get involved in any guided tours, the only way to get inside the handful of buildings on the site, we stayed outside, on our own and read through the various placards placed around the property. 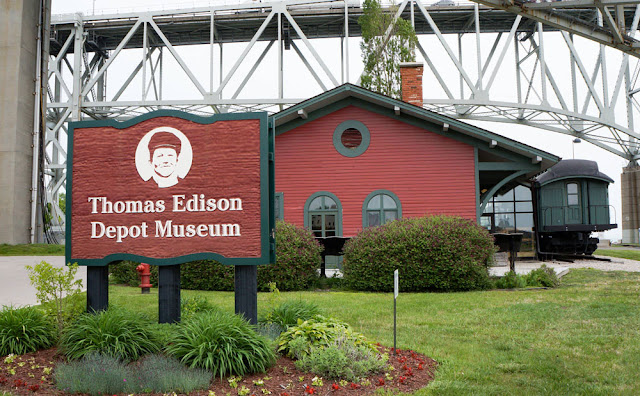 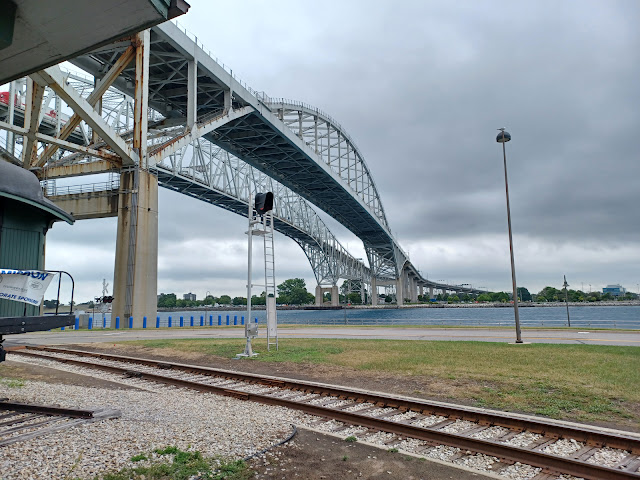 which is an actual RR depot still in it's original location though now it's right under the Blue Water Bridge which carries traffic across the river between Port Huron and Sarnia Ontario.

And it's not really his depot, but he did work out of this very depot riding trains to and from Detroit while selling newspapers, at one point even printing his own paper using a press he brought onto the train and hot news gathered from various telegraph operators along the way to get a jump on the competition. 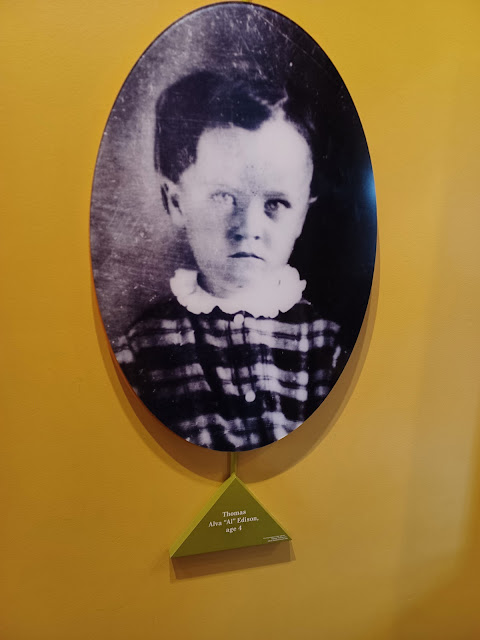 Many people don't know that Thomas Edison, not exactly a happy looking kid in this photo, spent his boy-hood living in Port Huron and, as he was later in life, as a boy he was a real hustler. He even had a lab set up in the baggage car so he could continue his experiments and not waste his down-time on the train. Well - he had a lab in the baggage car until something went wrong one day and he nearly burned the car down - - - The conductor was not amused! 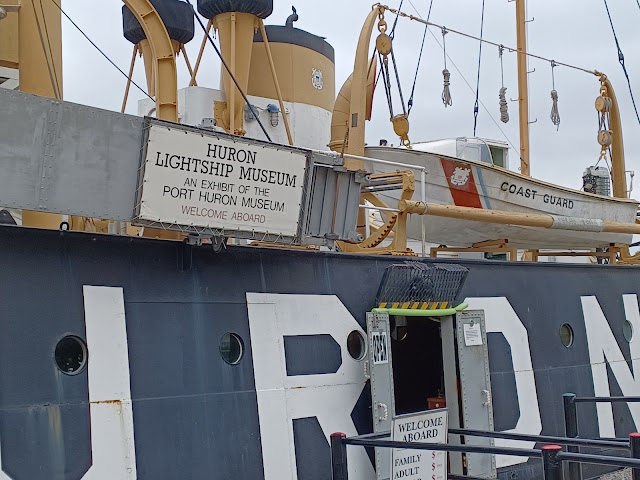 Next stop, again just down the river a little ways, was the Huron Lightship museum. 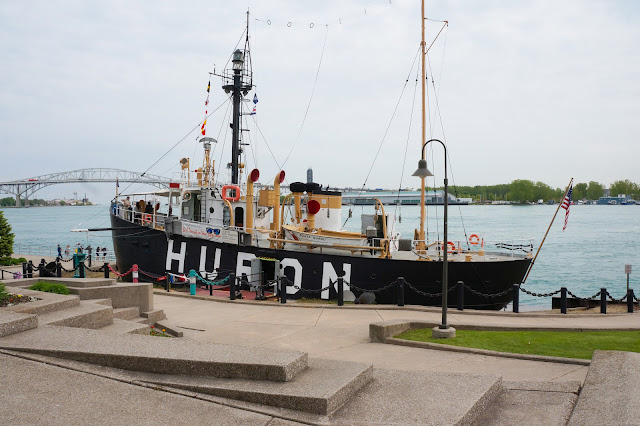 From around 1920 until she was retired, as the last operating lightship on the Great Lakes, in 1970 the Huron was anchored on a shoal about 5 miles north of the mouth of the St. Clair river to guide ships through the tricky waters. 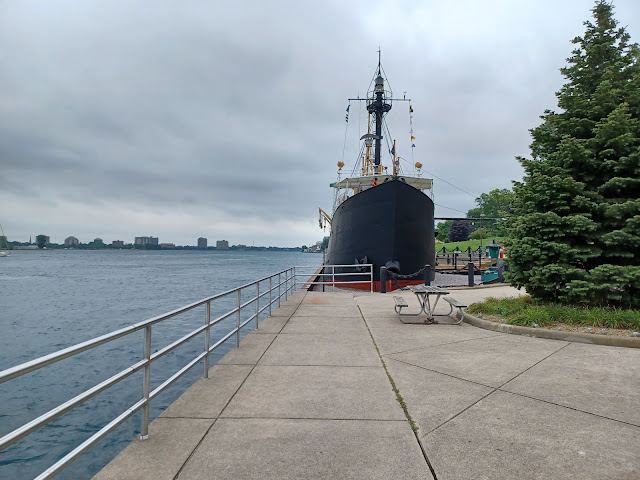 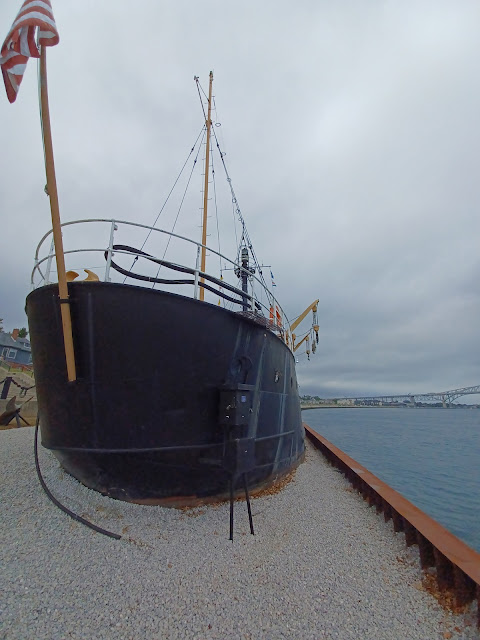 in sand beside the river 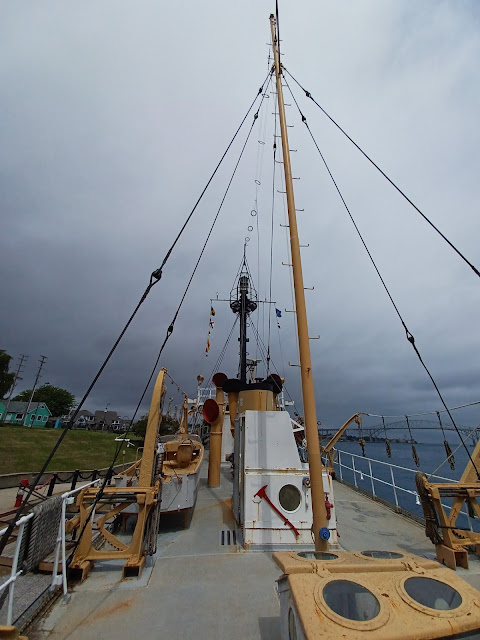 and acts as a museum for - well, herself. 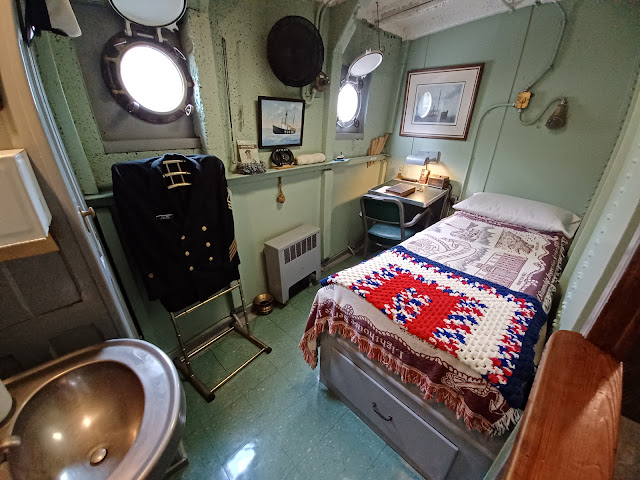 It's a good thing we were there on a Monday because, while visitors have pretty much full access to the ship 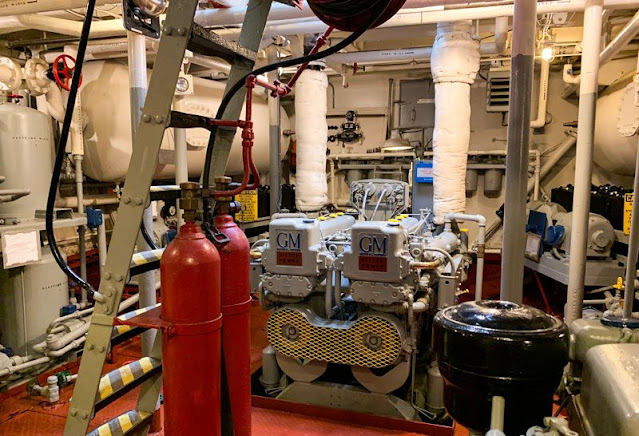 it's a pretty tight fit in some places so the-more-the-merrier does not apply here!

They didn't screw things up by making any more alterations to the ship in order to accommodate visitors than absolutely necessary, for instance, access in and out of the lower decks is still by the rather steep ladderways you find in working ships (Going up or down, always face the ladder! Especially at sea where that damn ladder just won't hold still!) and head-knocking piping that is endemic in all working boats still abounds, but I felt they could have done a better job of labeling things and providing explanations.

Fortunately, because of my ship-building background, I was able to act as tour-guide for my sister - and a few other people that wandered within earshot then stayed.

In addition to the main propulsion engine there in the middle, there are also two additional engines to port and starboard, each running it's own generator to make sure the light stays lit, and two more engines next to those, each powering its own air-compressor to ensure the fog-horn could sound for three seconds out of every thirty seconds when needed.

I used to visit a lot of museums on my travels but I became even more isolationist as I grew into retirement and fell out of the habit, and that's a shame because I really enjoy learning and connecting with the past.

I think I need to work on getting back into the habit and start visiting museums again. Paradoxically, I'm more comfortable in museums of any size with a light smattering of people than I am in tiny museums where I'm the only one there - because that makes me feel like I'm also on display. Not a comfortable feeling for an introvert.

We finished up the day with a stroll along the Blue Water River Walk. (Yep, there's some crappy photos here because, having left my proper camera behind, I only had my phone.)
Along with some habitat restoration efforts the walk provides a little bit of history, such as this car-ferry dock used to transport railroad cars back and forth across the river, which is also the border,

and some artwork as well.
Not a bad way to end the day!
But there's more scheduled for tomorrow! (Damn! This being retired thing is hard work!)