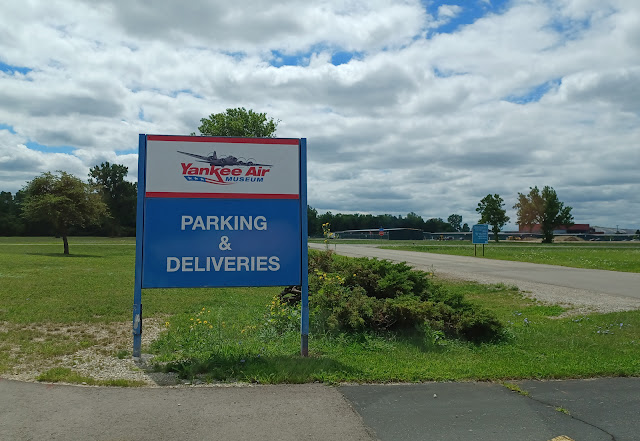 In the first post of this series that covers the 2022 family reunion trip I mentioned that during this trip I visited a few places outside my usual comfort zone, especially since The Wife and I are being very slow to come out of COVID mode. Add that on top of my normal aversion to peopled places, especially indoor peopled places, and this qualifies as one of those out-side-comfort-zone excursions.

But this was the last of those places for this trip (The excursions to Downtown Detroit and the museums in Port Huron being the others.) because it's Tuesday and tomorrow I'll be headed up to The Brother's place and from there on to the actual reunion camp-out.

And yes, we're still in Michigan, and no, I have no idea why this place is called the Yankee, and their web site did nothing to help explain the apparent geographical dislocation. 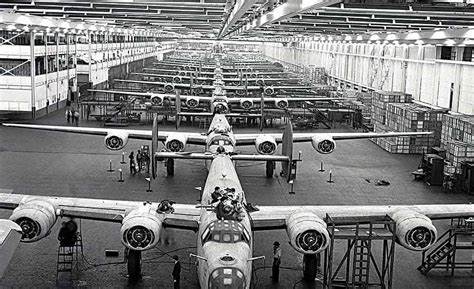 The museum is located at the Willow Run Airport where construction started on a factory in 1940 that started producing B-24 liberator bombers in 1941. By 1944 the plant was rolling out one completed bomber per hour and flight-crews were sleeping in cots as they waited for their particular plane to be rolled out onto the taxiway and fueled up.

The museum's original home was in one of the buildings that used to be part of this plant but that building burned down in 2004.

The current location is smaller but as is often the case, these small, under-sung museums can turn out to be unexpected gems.

But before I get to that, a little side-trip down our entry into the museum.

We were there early, in fact the first paying visitors to show up, and it seems that there had been a power-cut overnight that tangled up the ticket-office computers. Something that wasn't discovered until attempting to process our cards. While the woman was trying to get that sorted out another group came in behind us. Just as she seemed to be making progress and was running the first of our cards through the purchasing process she called over our heads, apologizing to the waiting group and informing them that if they had a smart-phone they could purchase tickets for $2 less on-line. (That's a 20% discount!)

Wait! What? Why weren't we given that option?? Maybe because the three of us Sister, Mom and me, looked too old to be smart-phone savvy?

Anyway, tickets paid for, we finally made it through the door. 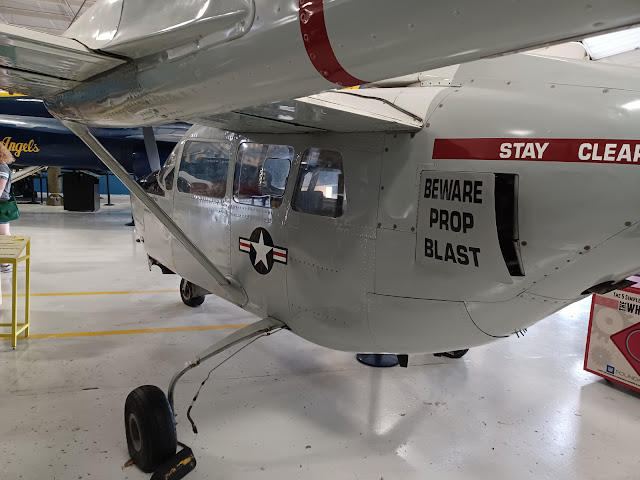 Inside, where a crew of volunteers was waiting to give private guided tours to any that wanted, (we chose to go it on our own) is a healthy array of exhibits.

There's the expected airplanes of course,

but also a large dose of educational tools that, in addition to this full-scale cockpit for kids of all ages to crawl all over, includes a couple simple flight simulators, some interactive displays that explain fight-controls, and even some classrooms for school field trips. 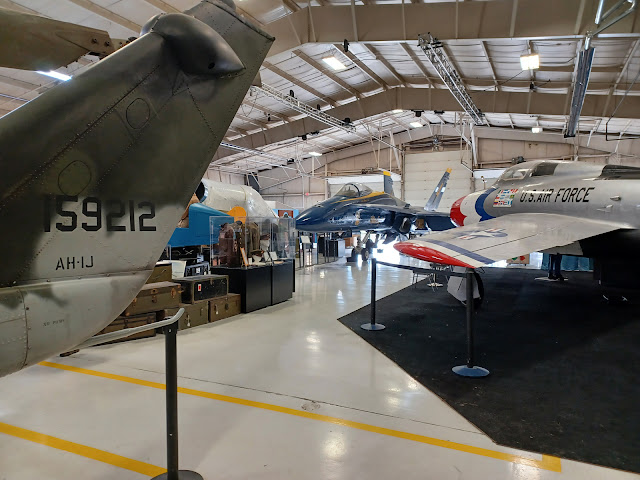 But it wasn't all planes either.

See those footlockers stacked up behind the tail of 159212? Those have been donated by the men (most are stenciled with name and rank) that actually used them while in the service and are nicely displayed as if sitting on the dock waiting to be loaded onto a ship.

The glass cases just beyond the footlockers each contain a variety of personal items of various solders and support people. (Women weren't allowed to be actual solders at this time but that doesn't diminish their contribution. In fact it sometimes makes their contributions all the more remarkable.) 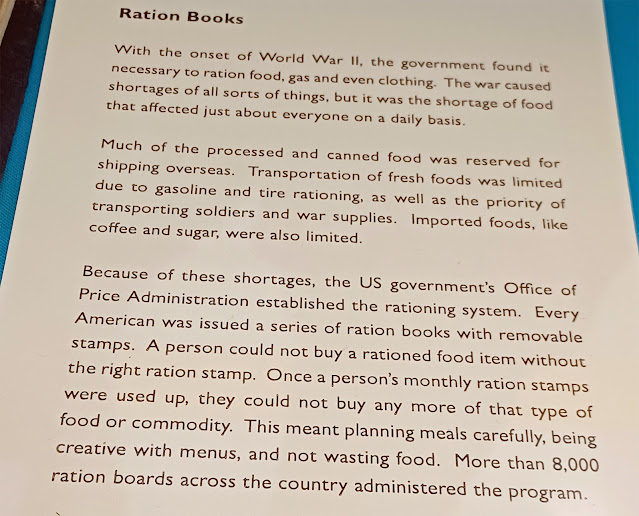 And those that 'kept the home fires burning' haven't been forgotten either,

with a comprehensive display of a number of ration books 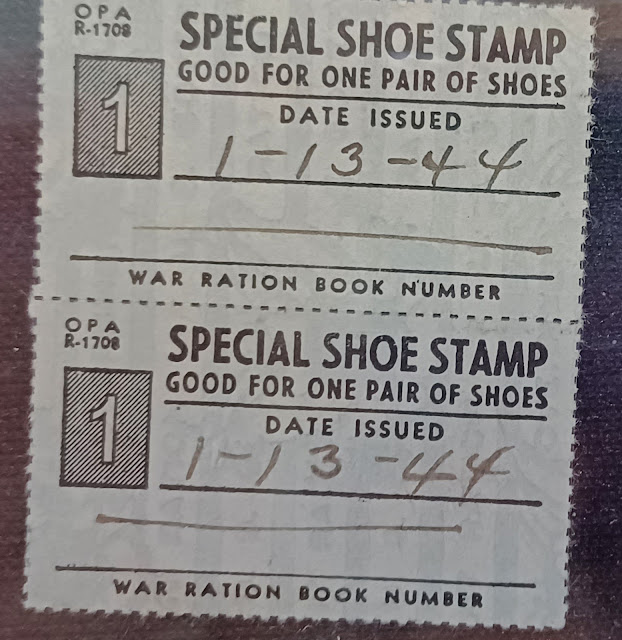 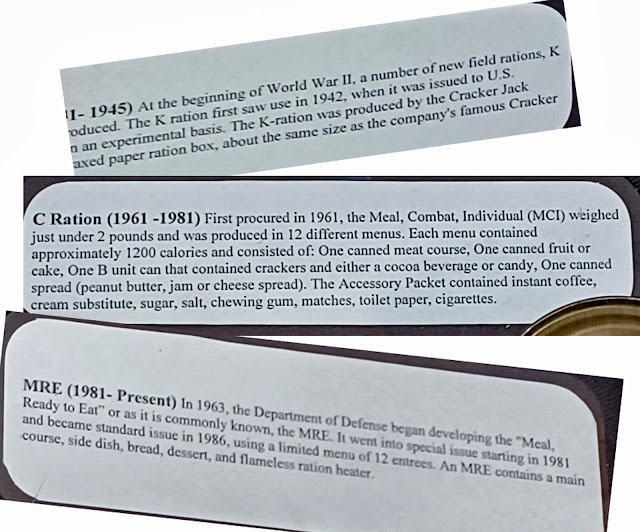 that I found personally interesting 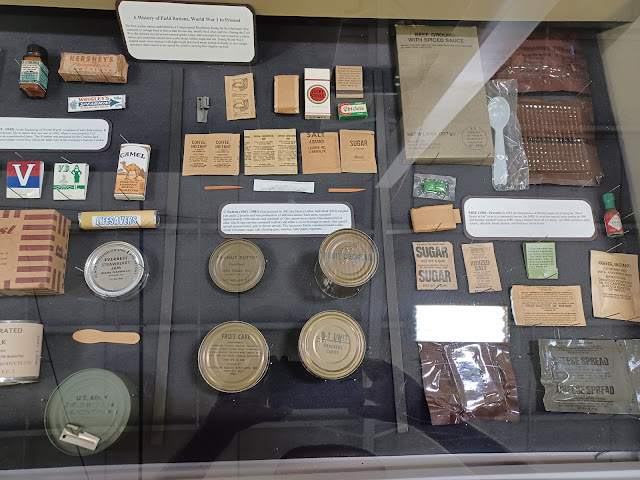 was this one showing the evolution and details of K, C, and MRE rations.

My dad and uncle were K ration solders. (on the left)

I was a C ration solder (middle) still using that same little finger-killing can opener as my dad.

And today The Wife and I keep a stock of MRE's (right) both at home and in The Van.

Anyway, I won't try and give you the full museum experience here, that never works, (I know because I've tried in the past.) but maybe if you find yourself in the area - - -

(But be sure to buy your tickets on-line!!)