Time For a Change? 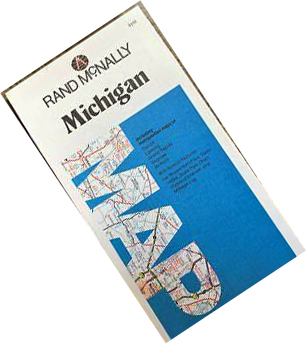 I like maps!
I grew up with them.
The traditional folding variety 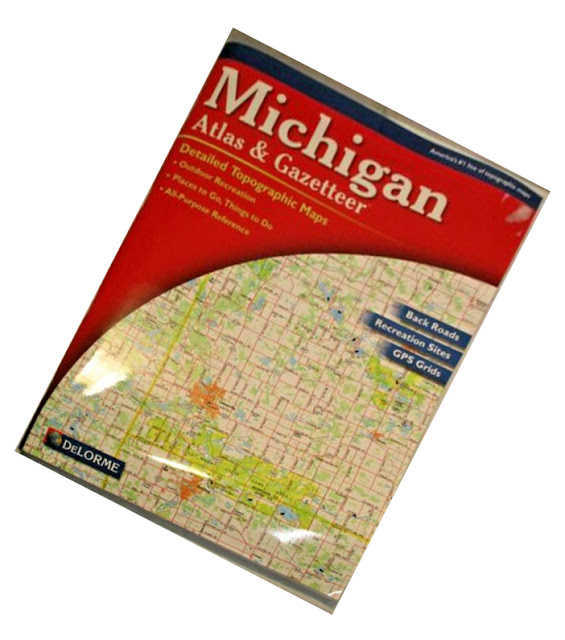 as well as the more detailed book-form atlases.

They were in the car, on the kitchen table, under my bed, and even illicitly tucked into my schoolbooks. (With the right textbook, if you hold it up at an angle you can hide more interesting reading material from the teacher!) 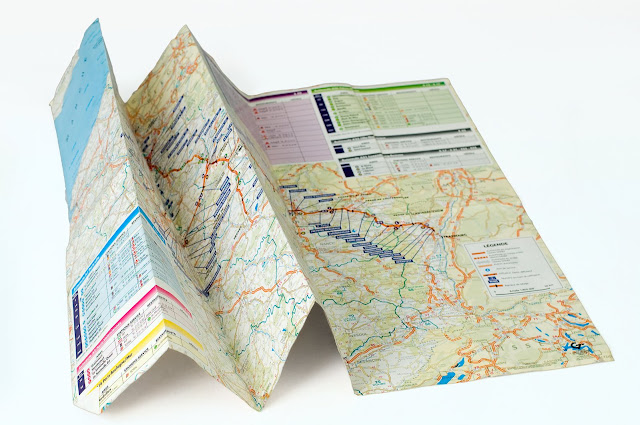 So I've spent many hours with maps. Sometimes finding my way - and not in the zen way - although that probably couldn't hurt.
Sometimes just paper-exploring. 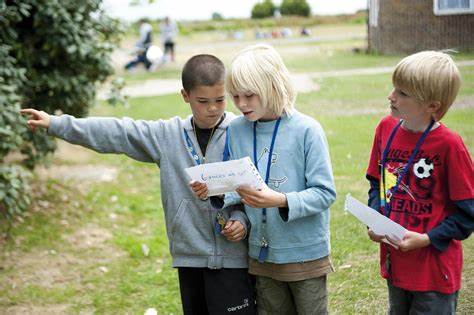 Sometimes orienteering, which is something we did a lot in my Scout Troop.
And hiking, even in familiar territory, with them in my pocket just in case. A tattered old security blanket if you will.

But I'm also a mild teckie, (As opposed to a rabid teckie. The difference is that I still turn my lights on and off with a $3 wall-switch and not with an app on my cellphone and $100 dollars of added gear.) 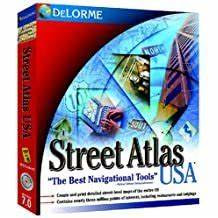 so many years ago, long before Google Maps came about, I added electronic maps to my repertoire.

I started out using the Delorme Street Atlas for PC, and after several versions of that (The only way to get updates on Delorme's products was to buy the new version every few years, but fortunately it was surprisingly affordable,) I eventually switched 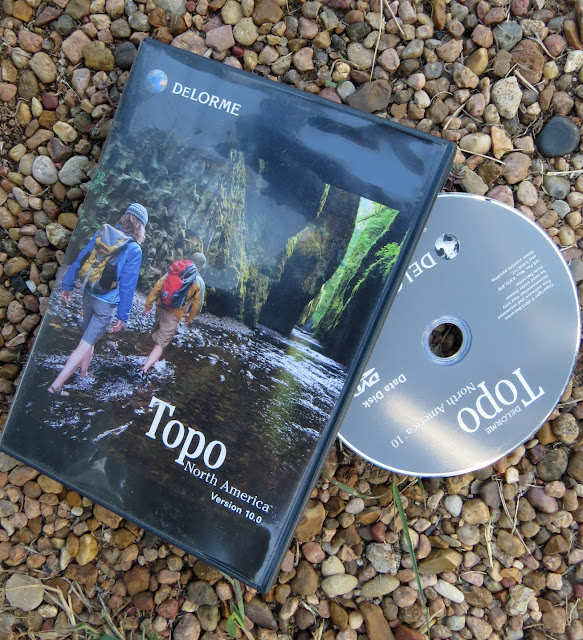 to the Delorme Topo series.

All the useful features of Street Atlas, though still the same sort of update strategy, but also the topo feature that the hiker and off-the-beaten-pather in me could put to good use. 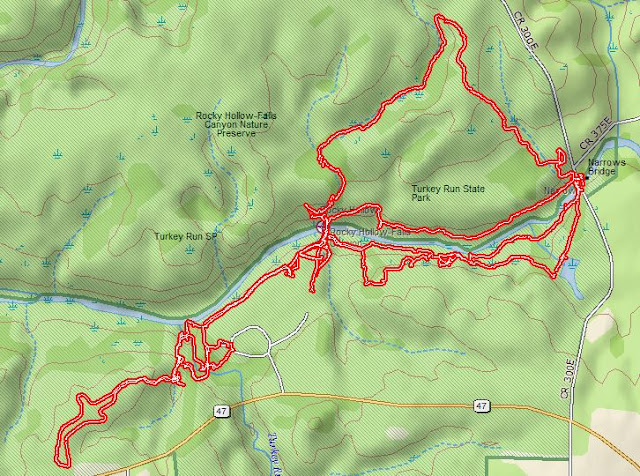 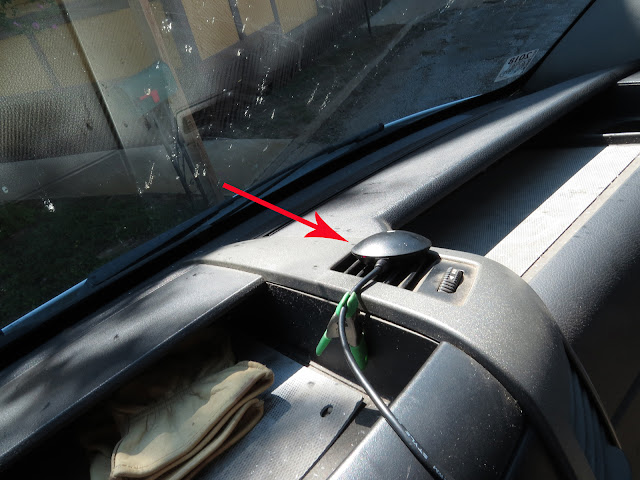 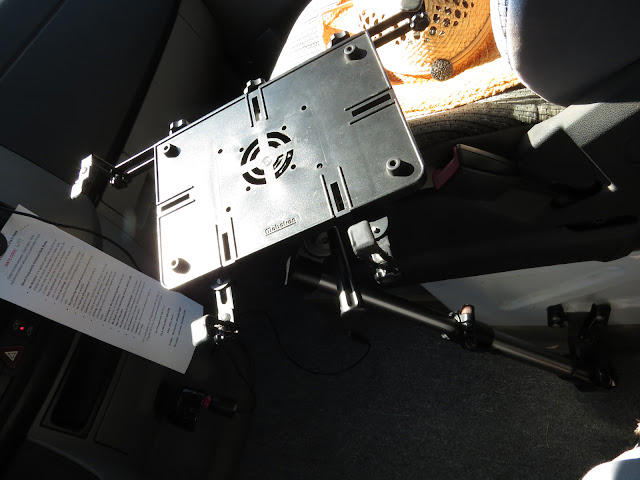 using this stand clamped between the seats, on which 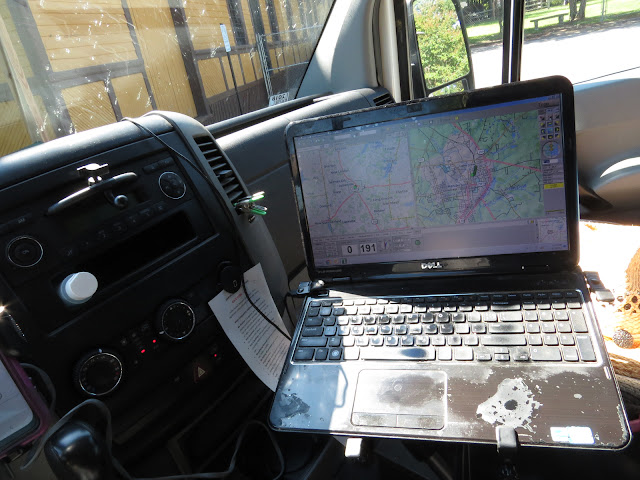 I've been setting my PC up next to the driver's seat for many years now.
Counting back through the vehicles I've been using this stand in, for something like 18 years. (But this current laptop is only 12 years old!)

If I stick to one of my usual routes I don't really need the navigation help, but even then,  somehow being able to glance over and verify my position in the world on the longer trips is comforting. (More of that Zen stuff I suppose.) 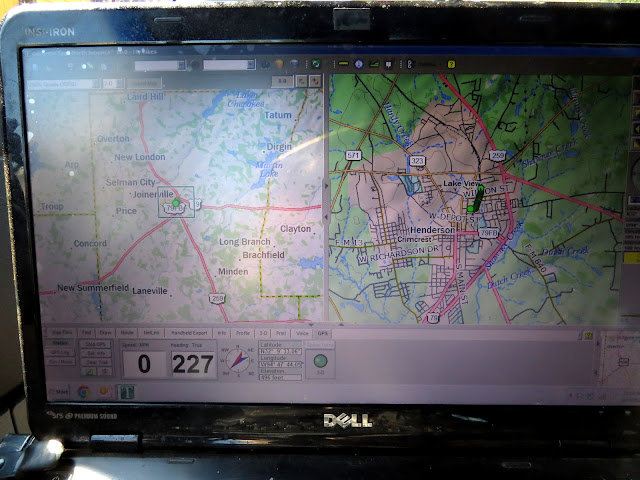 And when I've wandered off onto a new route, something I'm prone to do, the split screen of the navigation mode, the right side a closeup view for picking out turns, (I can zoom in several times closer than this if necessary.) and the left side a longer range view that allows me to figure out where I am in the larger context of the world.
All of which is much more convenient, and safe, than the solo driver trying to use a paper map.

But - - - (Oh come on, with that title you knew there was a but coming!) - - - Garmin bought out Delorme's electronic division about 8 years ago and quickly scrapped the whole line of electronic products, all the GPS's and the whole line of digital maps - even though they had no comparable PC-based product of their own - to get rid of the competition.

So I've been stuck with my old copy of Topo 10 ever since.

There's been a whole lot of road construction since then and because updates aren't available anymore, I often find myself driving on what my outdated map thinks is empty land on roads that aren't supposed to be there. (i.e. Grand Parkway 99 around Houston, I-69 through southern Indiana, the Hooser Heartland Highway between Lafayette and Logansport in northern Indiana, US24 across northern Ohio)

Obviously this isn't going to get any better. And there's also the very real possibility that my laptop is going to crap out one day and force me onto an OS version that won't support my discontinued Delorme Topo. (I'm still running Windows 7 right now) 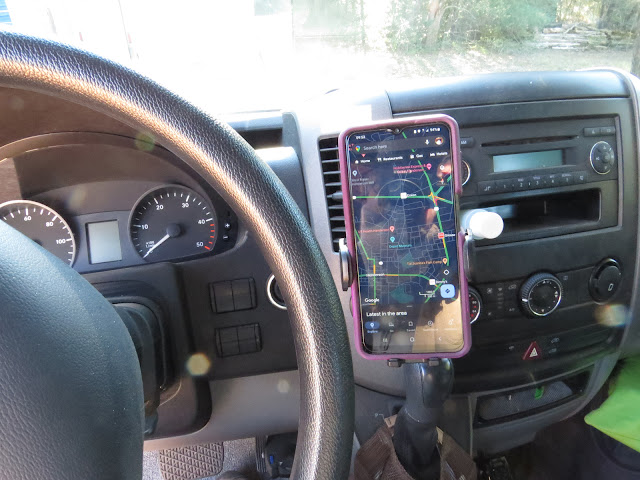 So for this year's family reunion trip I thought I might try weaning myself off my old standby, stop suckling at the teat of Delorme, and see what it's like to sit at the big-kid table with Google Maps instead.
Predictably, after 2700 miles I can say there's pro's and con's to both Delorme and Google.
Delorme
Pro
Con
Google Maps
Pro
Con 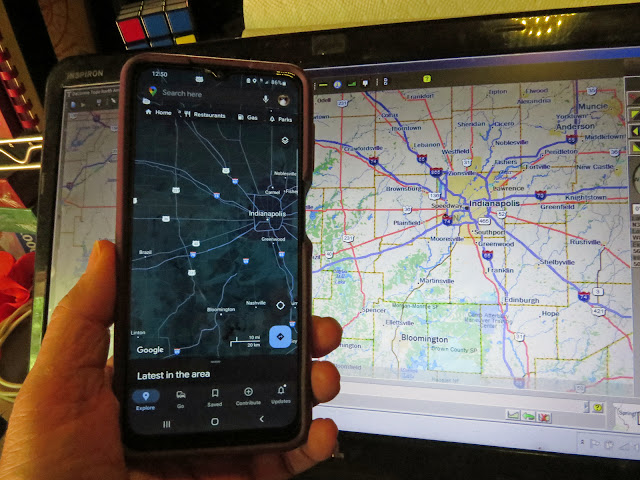 Notice that I didn't say much one way or the other about the relative size of the 15" laptop screen verses the phone screen.
That's because even though the phone is quite a bit smaller I can negate that by mounting it closer to my eyes, something that's not practical with the laptop.
So the results of my weaning experiment?
Google Map worked for me - for the most part. There are bits of things I'll have to adjust to, some things I'll have to do without, other things I'll have to get used to, but it was easier to make the switch than I expected. 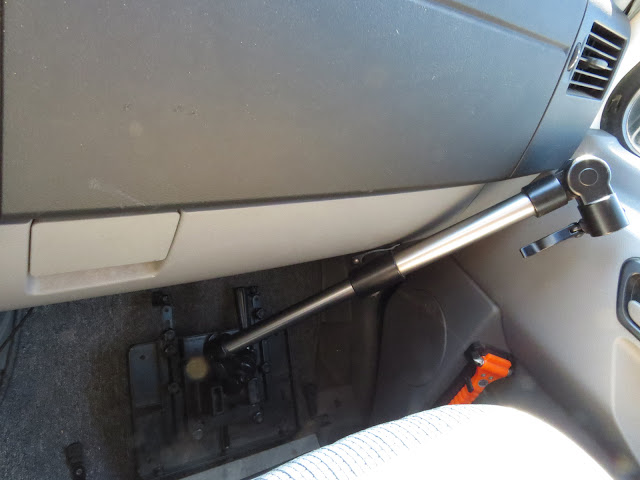 And let's just say it has been a relief to finally take that bulky laptop stand, that for year's I've tucked awkwardly away upside-down into the passenger-seat footwell when not using it, out of The Van and store it away on a shelf in the barn!
From now on I'll be navigating with Google Maps on my phone, 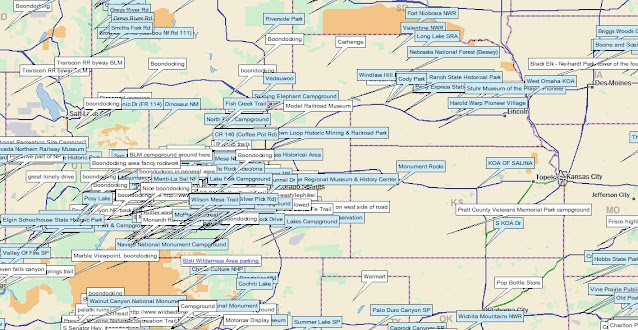 though the laptop with TOPO 10 will still be coming along because it still does some things better.
Such as giving me the ability to stick pins into the Delorme map.
And I have a lot of pins in my map! 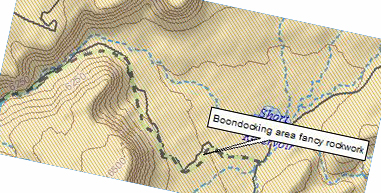 Others are places other people have wrote or told me about that I might want to go to one day. 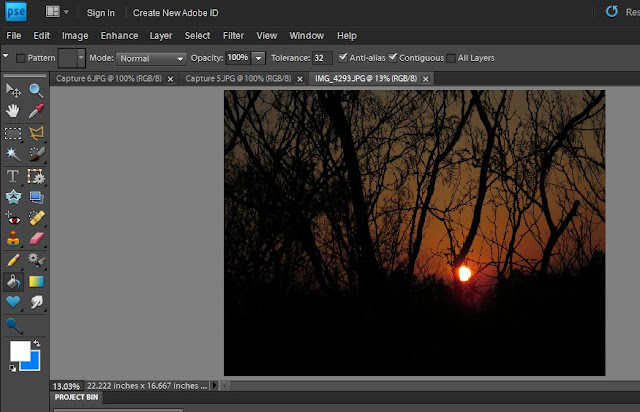 Another key use of my laptop is photo editing, though I'm not sure what I'll do when the laptop craps out and the free copy of Photoshop that came with my very first digital camera isn't supported on the new OS.
But when that time comes I'm sure I'll figure it out 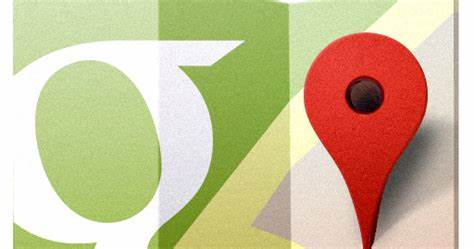 A few more comments about the nav-tools:
With the Delorme, other than briefly using it to get an estimated drive-time before setting out, I never set up routes to drive by. In part because there are often roads available that Delorme didn't know about and also because the route function isn't self-healing when I go off-route to explore some new bit of road, which I'm prone to do. But with Google Maps I find the distance-to-next-turn when in "directions" mode helpful when on an unfamiliar route and Google Maps self-corrects when I wander away from the suggested route, so I've been using the routing feature.
When Using Goggle Maps in "directions" mode with the volume turned up  the lady-in-the-box is pleasant enough, but maybe too pleasant. When I turn away from the suggested route or don't turn when she tells me to, she gently bongs at me and calmly gives me new directions in the same, even voice. I kinda wish there were a couple of additional 'frustration' levels I could choose from. Maybe one that says 'Hey! Wake up! I told you to turn back there." and another that's more like "HEY DUMMY, WHATS THE MATTER WITH YOU!? YOU JUST MISSED THE FRIGGIN TURN! - AGAIN!)
I kinda wish I could trade her out for the little girl I recently saw in a short video. She was a tiny little thing, not quite old enough to form her words very clearly, sitting on the lawn in a tiny chair as she explained that this was the ice bucket challenge and giving the names of those she was nominating. At this point she says "lookout" and an adult hand appears from the side holding a pan of water, no ice but obviously cold, and gently pours the water over the girl's head. This sweet little pig-tailed thing dressed in pink squeals, jumps out of the chair, and exclaims "FUCKING HELL!"
I'll bet she could keep me on my toes!
I also kinda wish I could teach Google Maps my personal driving style. (Something I can do on Delorme) When plotting routes Google Maps apparently uses the full published speed limits with no downtime, no rest stops, to estimate the time between here and there. In my case, since I drive no more than 65 even when the speed-limit is 70 or 75, or in the case of Texas, 80 and 85, and, like a real boy, I do make the occasional stop along the way, Goggle consistently underestimates how long it will take me to get to there.
But that's just niting picks. 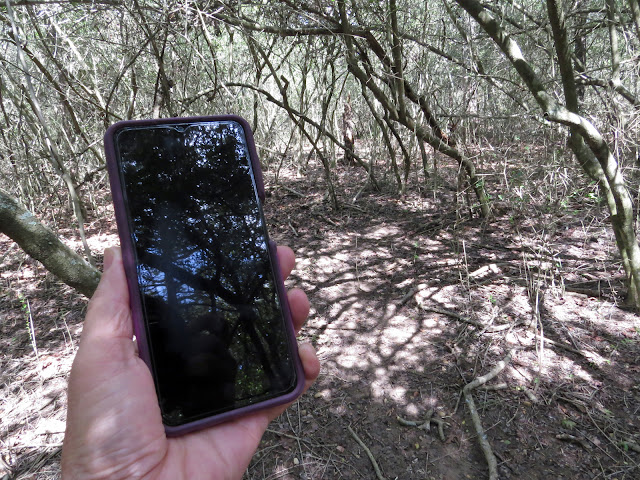 So, in addition to reading books, (Kindle app) reading magazines (Sidebooks app) streaming TV shows, (Amazon Prime) backup to my handheld GPS, (Gaia GPS app) shopping, banking, paying bills, daily Spanish lessons, working brain puzzles, keeping up with Blogger, email, and texts, researching stuff, finding overnight parking spots, making campground reservations, checking on the weather, making written notes, recording thoughts, timing how long the fish has been on the grill, reminding me when it's time to side-dress the vegetable plants with fertilizer or send a birthday card, Blue-Toothing to my solar charge controller or the dash-cams, Oh! and making phone calls, (Although my average monthly talk time is something like 23 minutes - and no, we don't have a landline.) pretty much anywhere and anytime, now my $300 phone with $50 unlimited data/text/talk plan is also my nav-system!