More shade for the van

I'm an information freak, I'll admit it. Which is one of the reasons I have a DashDaq ODB2 reader in the van. (I was going to put a link here for it but I see it's no longer in Drew Technologies product offerings.)

This little guy lets me monitor the signals available on the ODB2 port, (That computer diagnostic port somewhere under the bottom of the dash on all vehicles not old enough to be called 'classic'.) which means I can read diagnostic codes as well as monitor a number of different 'gauge' signals.

You remember gauges don't you? (Well maybe not if you studied the Gulf War in high school history.) They're those round thingies in the dashboard that told you what's going on with your vehicle before they were abolished by lots and lots of lights. (Like I really need a light to tell me my coolant system has overheated! I guess that's in case I missed the terrible noise coming from the engine and the billows of steam blocking my view!!)

I mean for crying out loud! My Sprinter doesn't even have a fuel gauge!! Instead it has this LED display like the signal strength meter on your cell phone, only with 10 bars instead of 5. So I'm driving along feeling pretty good with 4 bars of fuel when I noticed that at some point along this dark and empty road it dropped down to 3 bars while I wasn't looking. So does that mean I have just a little under a half tank and am going to make it to those distant lights I can see out there across the desert, or have I burned almost all the way through my '3' bar and am about to suddenly have less than a quarter tank with which to escape the rampaging coyotes and swarming tarantulas???

DashDaq to the rescue! Seems the signal that used to be sent to a 'regular' fuel gauge is still there, you just have to know how to get to it. Fortunately my DashDaq does know and can tell to within 1 one tenth of 1 percent how much fuel I have in the tank. (That's if I use a digital display, but I find it a little disheartening watching the tenths click down when bucking a headwind so I stick to an old-fashioned dial type gauge for that reading.)

There's lots of other useful 'gauge' signals available off the computer too.

I have mine set up to show:

Engine load:   This one helps me treat the van gently. If I see the load getting up over 80% and staying there it's time to think about slowing down or downshifting (Yes, the automatic transmission will downshift on it's own at some point but you have to remember that the factory set the shift points for maximum fuel mileage with drivetrain wear being a secondary consideration.)

Fuel mileage:    Sometimes it might be easier on the nerves to bury my head in the sand on this one, but - well - I seem to be addicted to watching this number fluctuate as I climb hills then coast down the other side, though I am tempted to turn it off when pulling the trailer!!

Ambient air temp:    I don't know, I just think its good to know if that wet looking bridge up there might just be covered in ice, or, on the other end of the scale, if your brain is going to boil when you leave the air-conditioning.

Engine coolant temp:    I'd much rather know ahead of time that the engine is getting hot. That way I can slow down or even pull off in a spot of my own choosing. The alternative is to wait for the dash light to light up and then panic. I'm not good with panic.

Exhaust gas temp:    Another good indication of engine load. And since the Sprinter is a diesel with a soot filter, I can see when a 'burn-off' is under way to clear the filter because the exhaust temp shoots up by about 500 degrees. This helps prevent me from freaking out when the fuel mileage drops during the 12 or so miles it takes for the burn off to finish.

I could go on for a while more about the capabilities of the DashDaq but this was supposed to be a simple post about a short project.

You see, there's a reason your dash indicators are buried way back in there where the sun can't get to them very easy. It's because they're kind of hard to see otherwise. And the DashDaq suffers from the same problem. In fact it's amazing how many different sun directions can make it nearly impossible to read.

My first attempt at correcting this situation was OK, but had two major flaws. Even though the dash cowl is close to the right side of the DashDaq and I didn't think I'd need shading on that side, the sun still sneaks in there with annoying frequency. 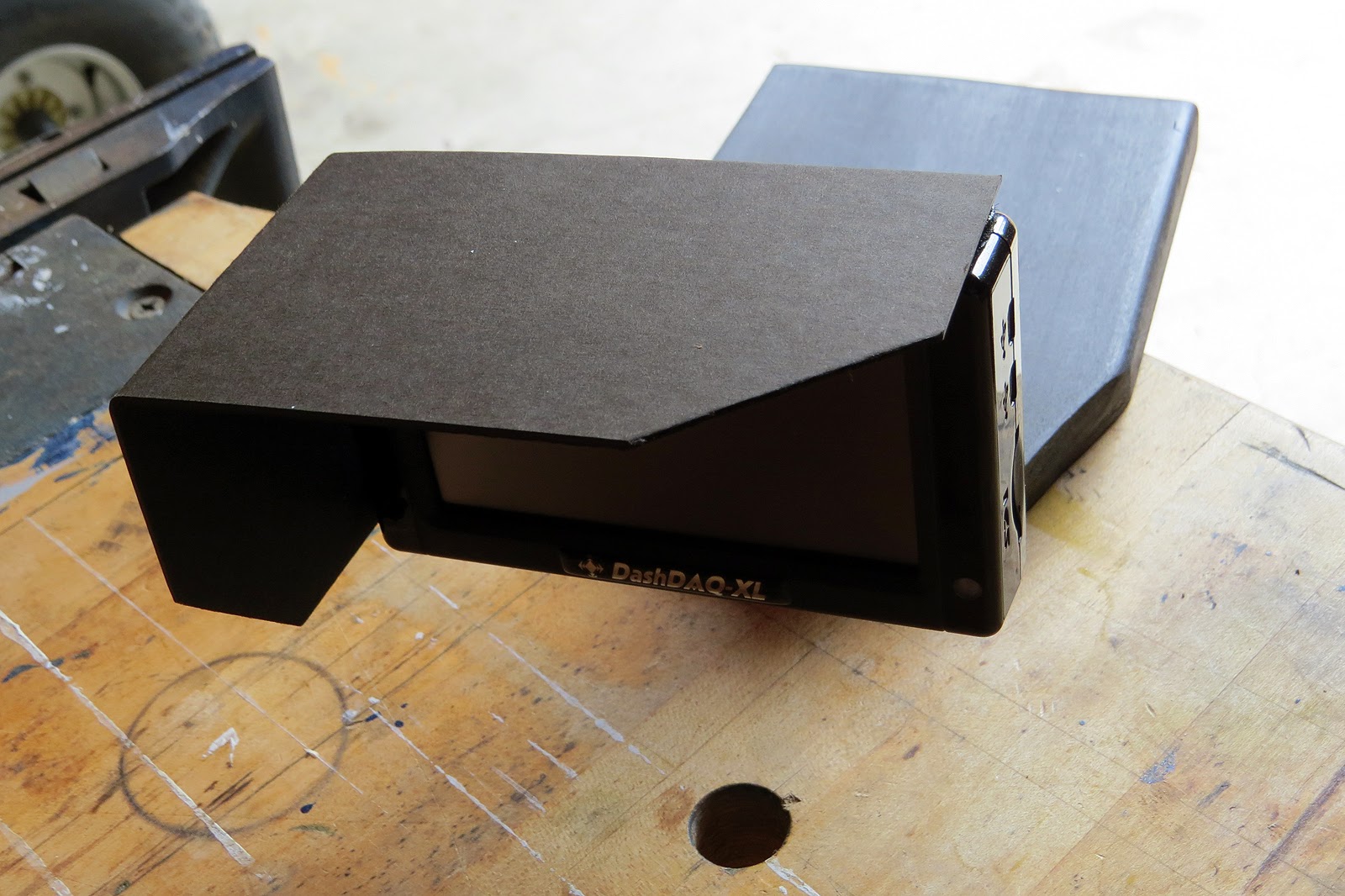 And here you can see the gap between the cowl and the DashDaq. This lets a surprisingly bright band of light through and turns out that's pretty annoying too. 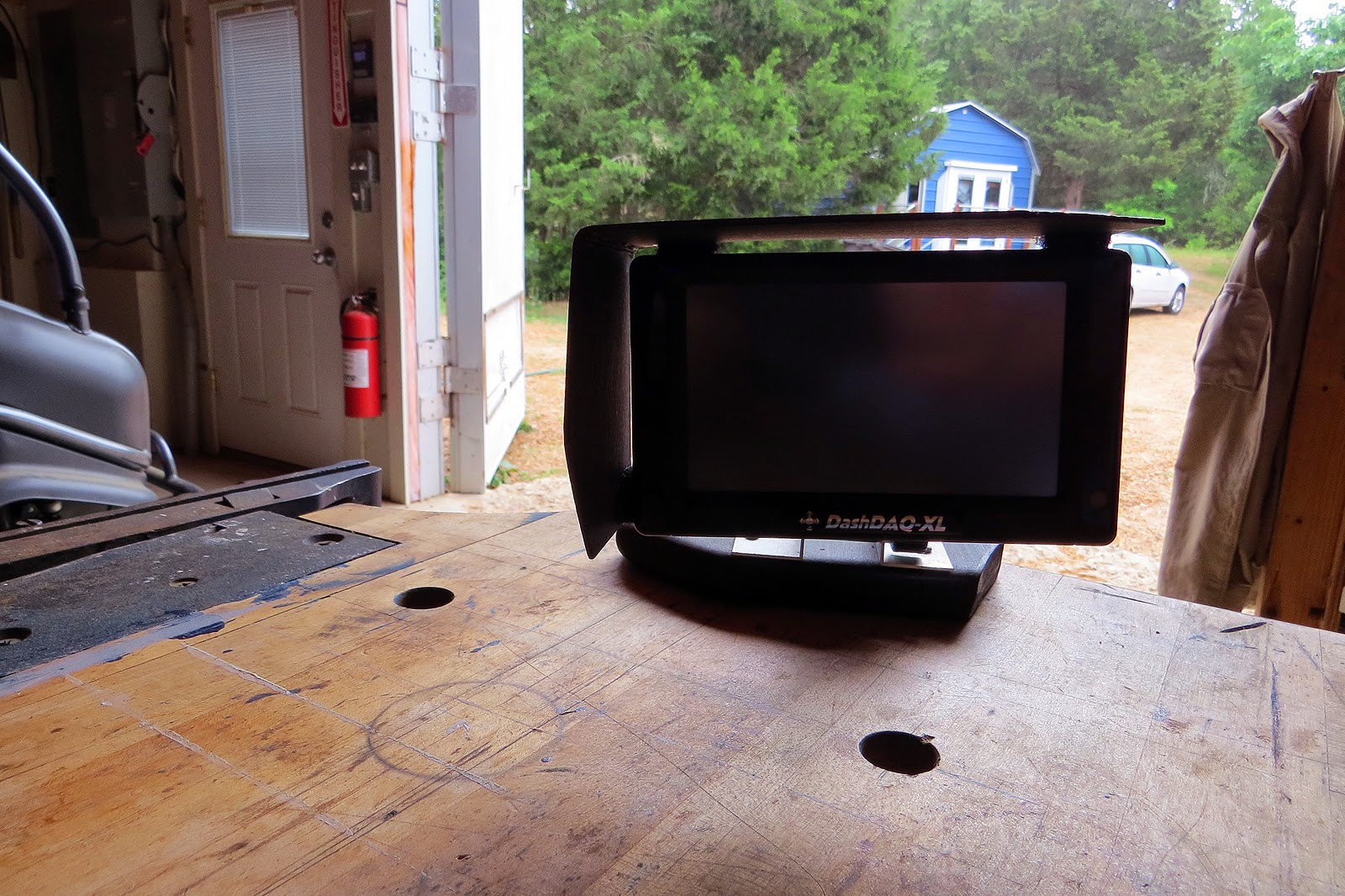 So the fix was to start over. This time I cut a piece of the black backer-board long enough to wrap both sides as well as the top of the DashDaq. I also scored and bent down about an inch of the board which will eventually fit in behind the DashDaq blocking those sneaky light rays. Some more scoring where the sides will bend down 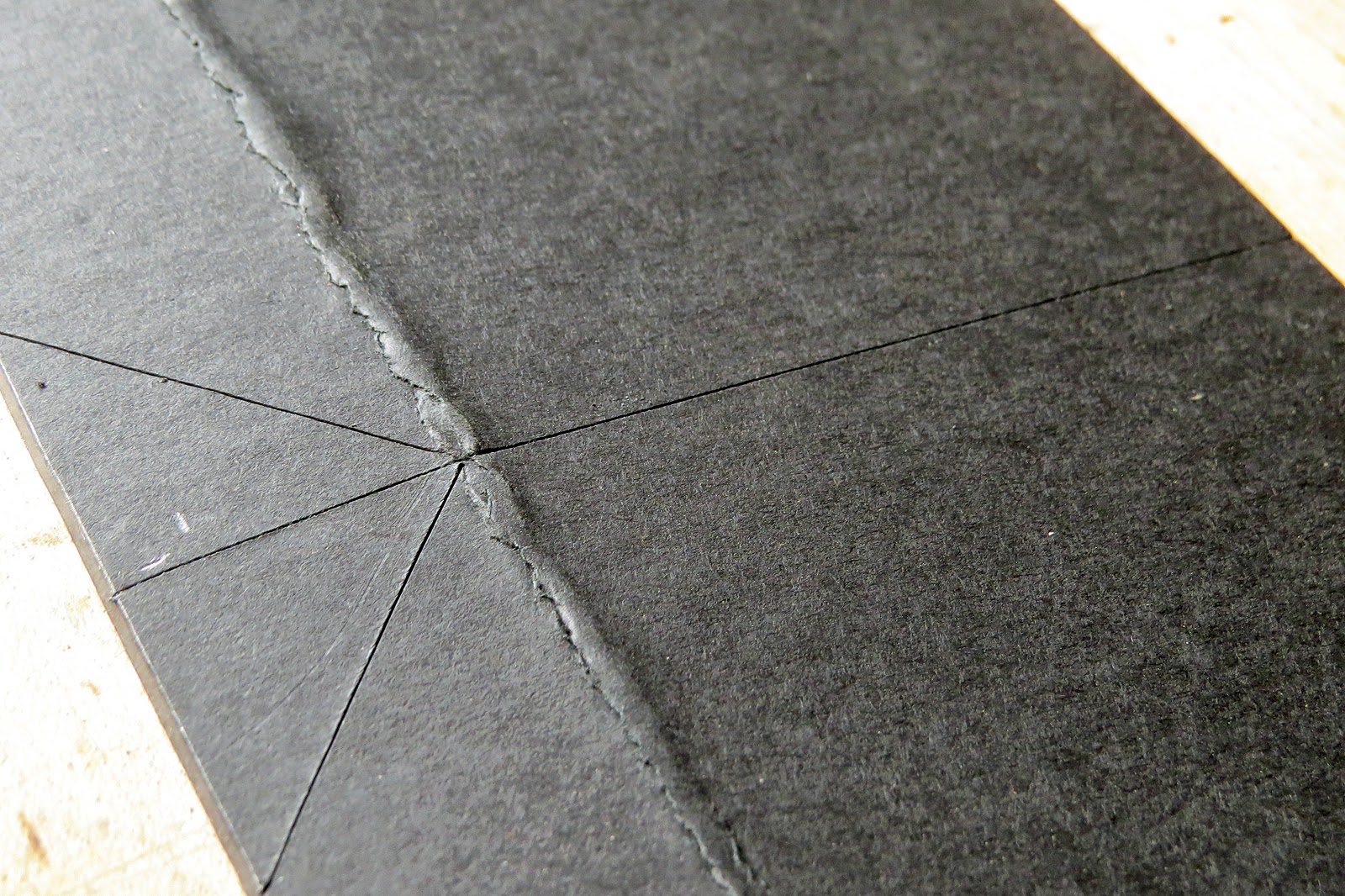 I cut a couple of splice-plates, just by eye, to cover the joints formed by the nibbles and hold everything in place once all the bends are made 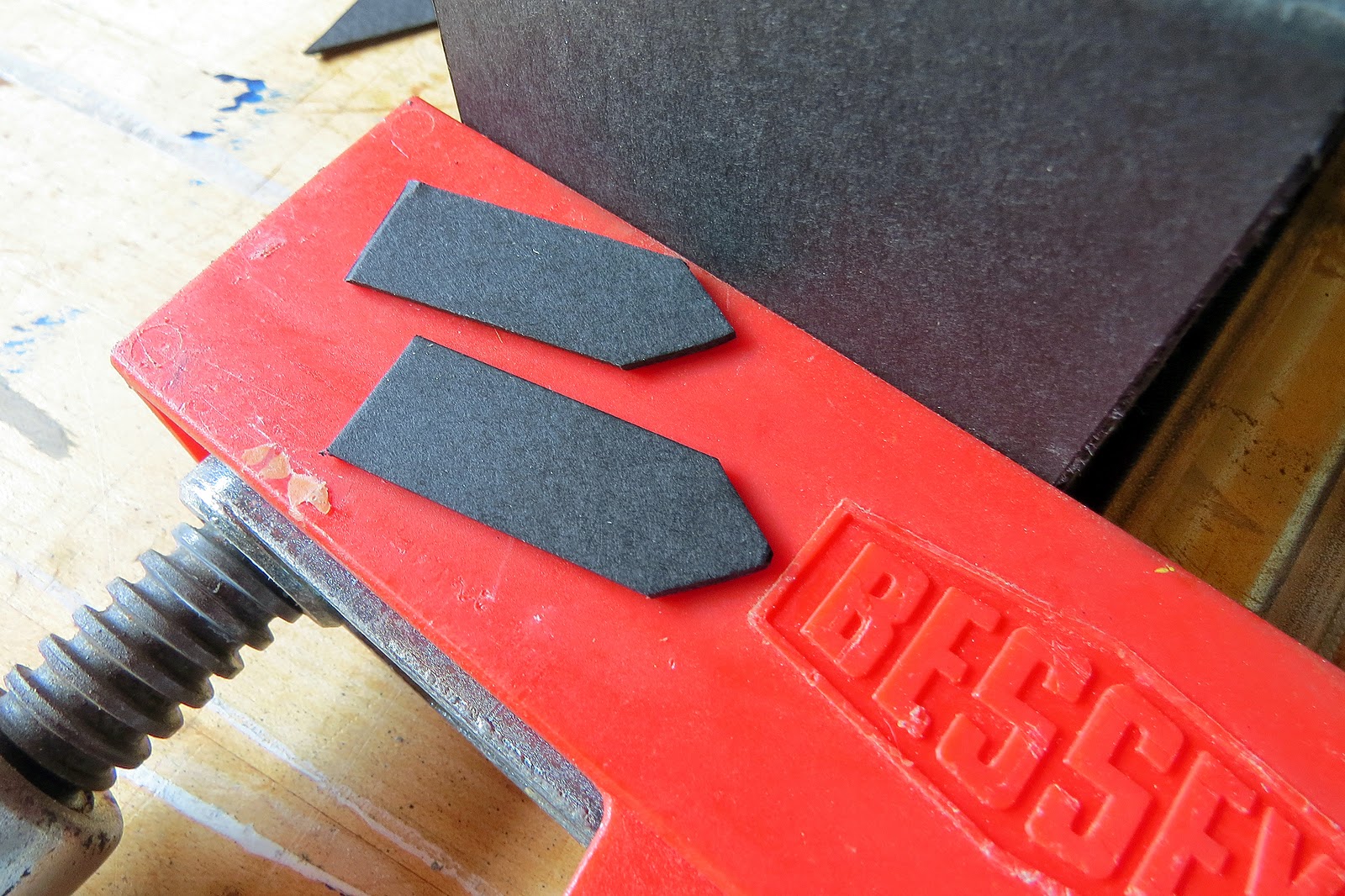 After making the bends I glued the splice-plates in place, keeping them there until the glue set with clamps and a few brass weights. 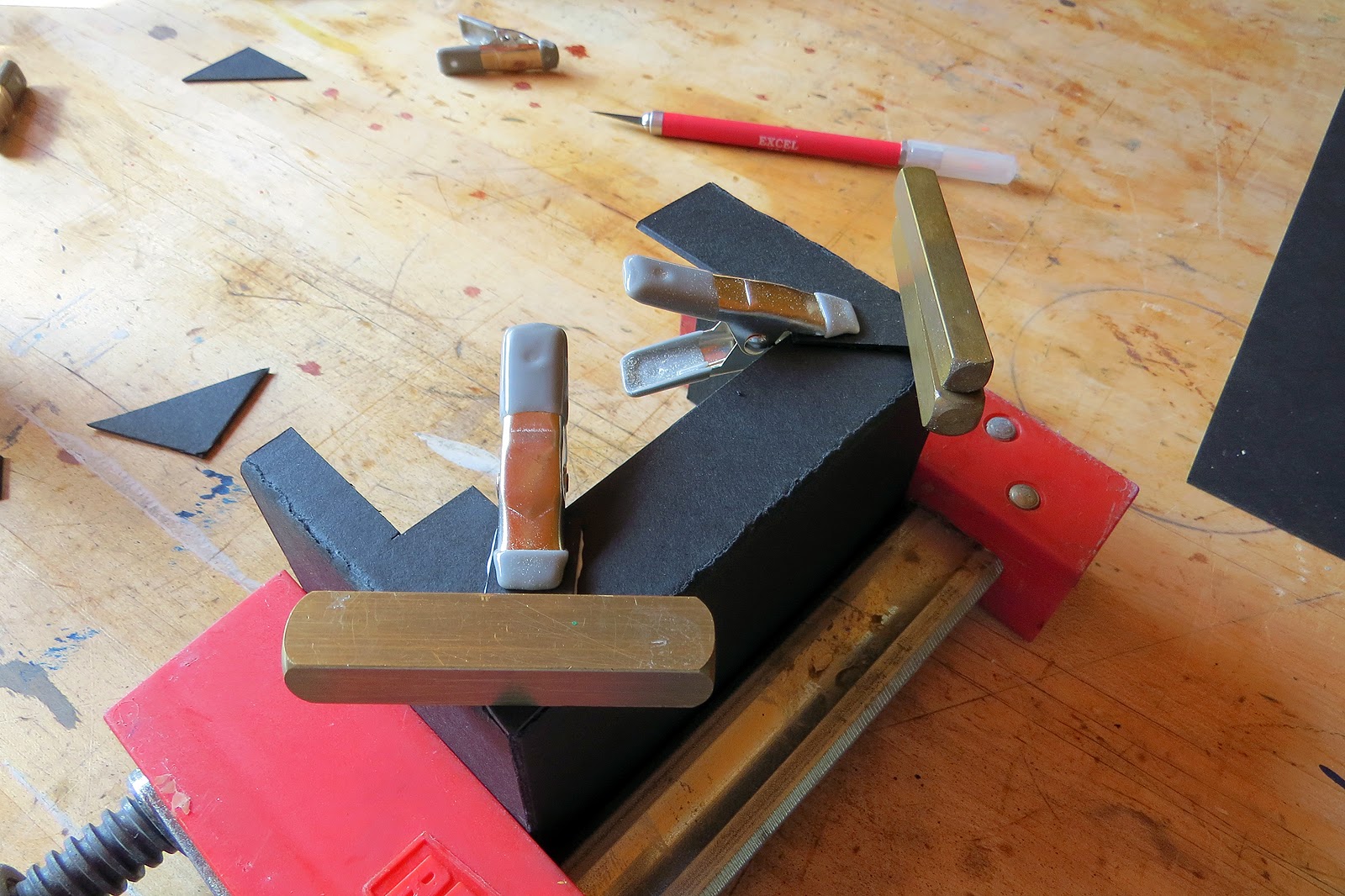 Added a couple Velcro dots (I know, I know, I'm supposed to write 'hook and loop' rather than Velcro unless they actually are Velcro brand dots, which I didn't bother to check, but I don't actually talk that way, saying Kleenex and Velcro and Xerox with no regard to registered brand names so why should I write that way??) The notch over there on the left is so the cable can be plugged into the back of the DashDaq 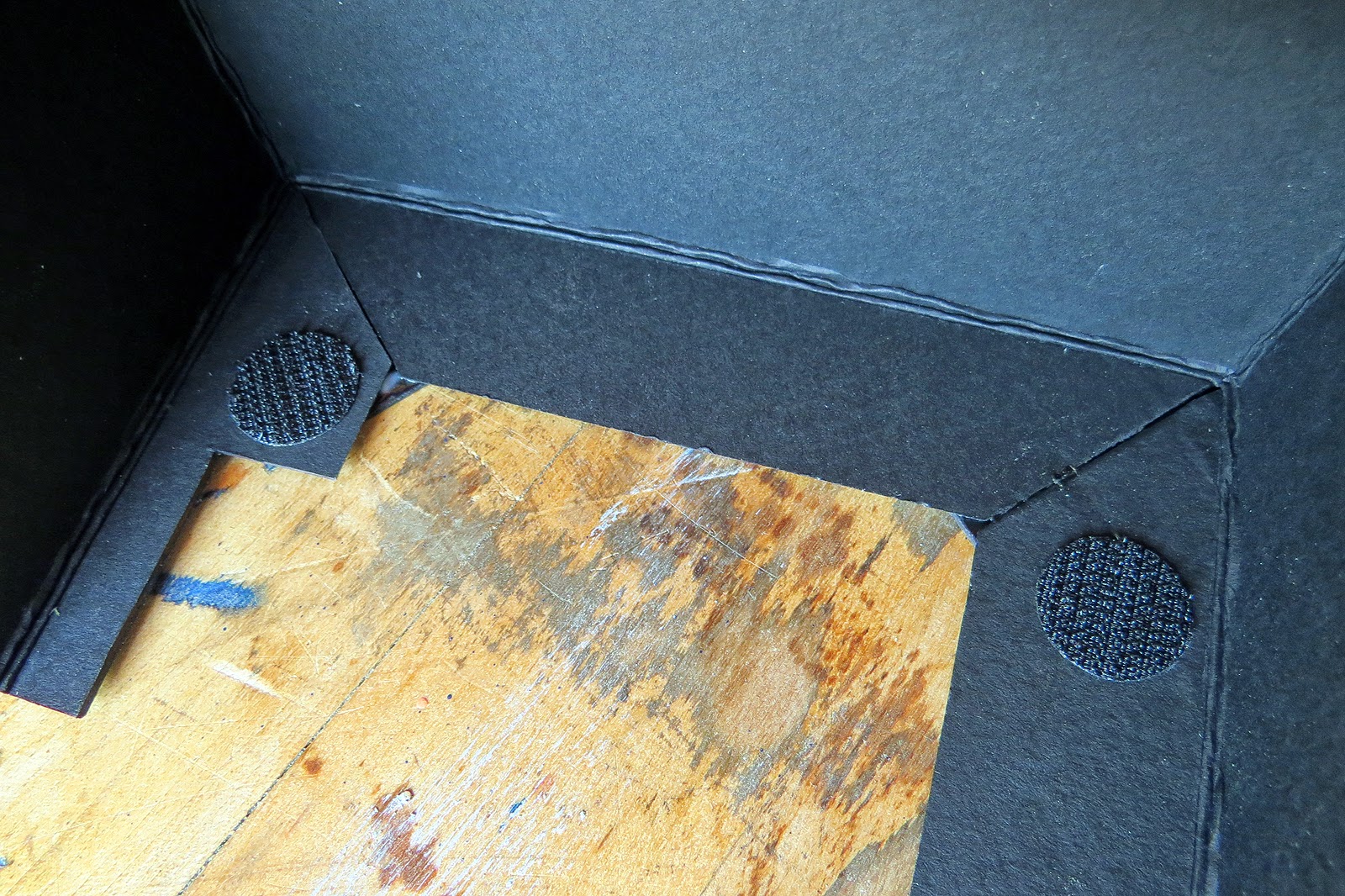 Stick the matching dots onto the back of the DashDaq, clip off the protruding square corners to give the shroud a little class, and we have liftoff!  Better sun shading and no light leaking in around the edges. 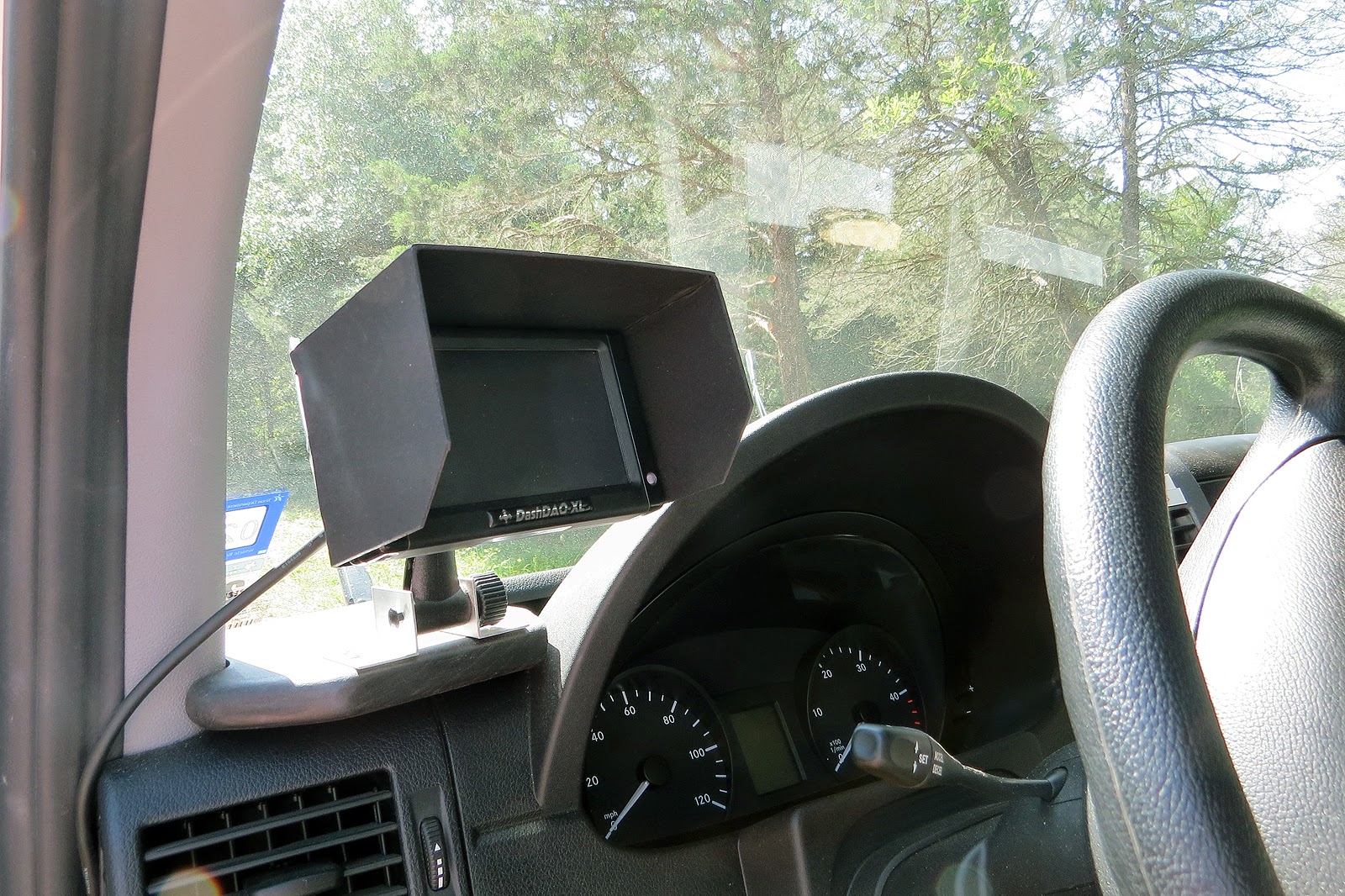 Since I got so long-winded at the beginning of this entry I think it might have taken more time to write it up than it actually took to complete the project!!