New addition to the van; And let there be shade

On my first van by Sportsmobile I had a Fiamma awning installed just like on the big RV's. Unfortunately it cost a healthy chunk of change yet I used it infrequently, very infrequently. (I hope the current owners of that trusty steed are getting more use out of the awning than I did.)

Like most RV awnings, it was sensitive to wind and because I had hinged side doors it had to be adjusted high to clear the doors when you opened them, which made it even more susceptible to blowing backwards over the top of the van. Not a good thing!

This high position also limited the awning's ability to act as a sun shade, as did the relatively small size dictated by the short length of the van.

So when it came time to have Sportsmobile build my current van I opted out of having the awning installed.

But now that I'm not spending most my time living in the van in a parking lot behind the office, now that I'm actually camping in it, I thought it might be time to dust off the E-ZUP we've had stored in the barn for - well - long enough that I forgot it was there.

Using the E-ZUP around the campsite instead of a regular RV awning has a couple of advantages.

First and foremost is cost. We already own the E-ZUP and it was otherwise just gathering dust - well, sawdust -  there in the shop. (I think I would have preferred it with the white cover but I'm not going to sweat the small stuff here.)

Second, I can set the E-ZUP up (Is that redundant??) in the best spot on the campsite rather than be limited to right there beside the van. (You are supposed to have two people to set it up and take it down, but with a little practice, and a little extra walking around as I tease it open bit by bit, I find I can do it by myself just fine.)

The third advantage might not be immediately obvious but I think it's a big one. One of my favorite sitting-around-the-campsite activities is kicking back in my chair and reading. As you can see in the following photo, I can do this without extending the E-ZUP's (Dang that's a pain to type over and over!) legs which not only makes it more effective as a sun shelter, but helps get it down out of the wind a little. (Face it, the E-ZUP is just as susceptible to wind as an RV awning.) 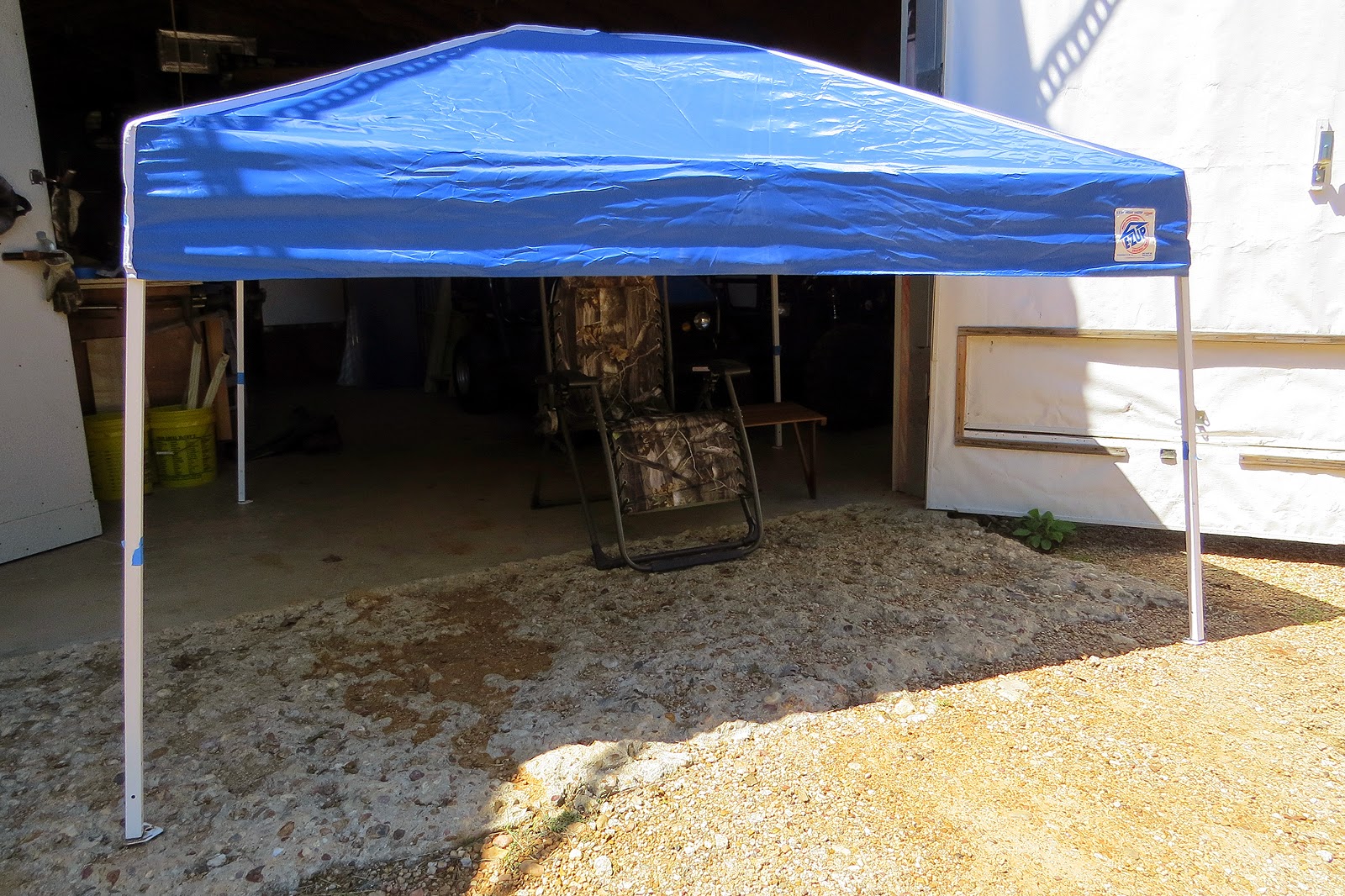 Even with the legs fully collapsed you can see that there's plenty of headroom under the awning to sit and enjoy a good book and a snack. By the way, it was very windy the day I did this (It's spring, what to you expect?) which is why I have the thing jammed halfway into the barn. Otherwise it was going to blow away on me! 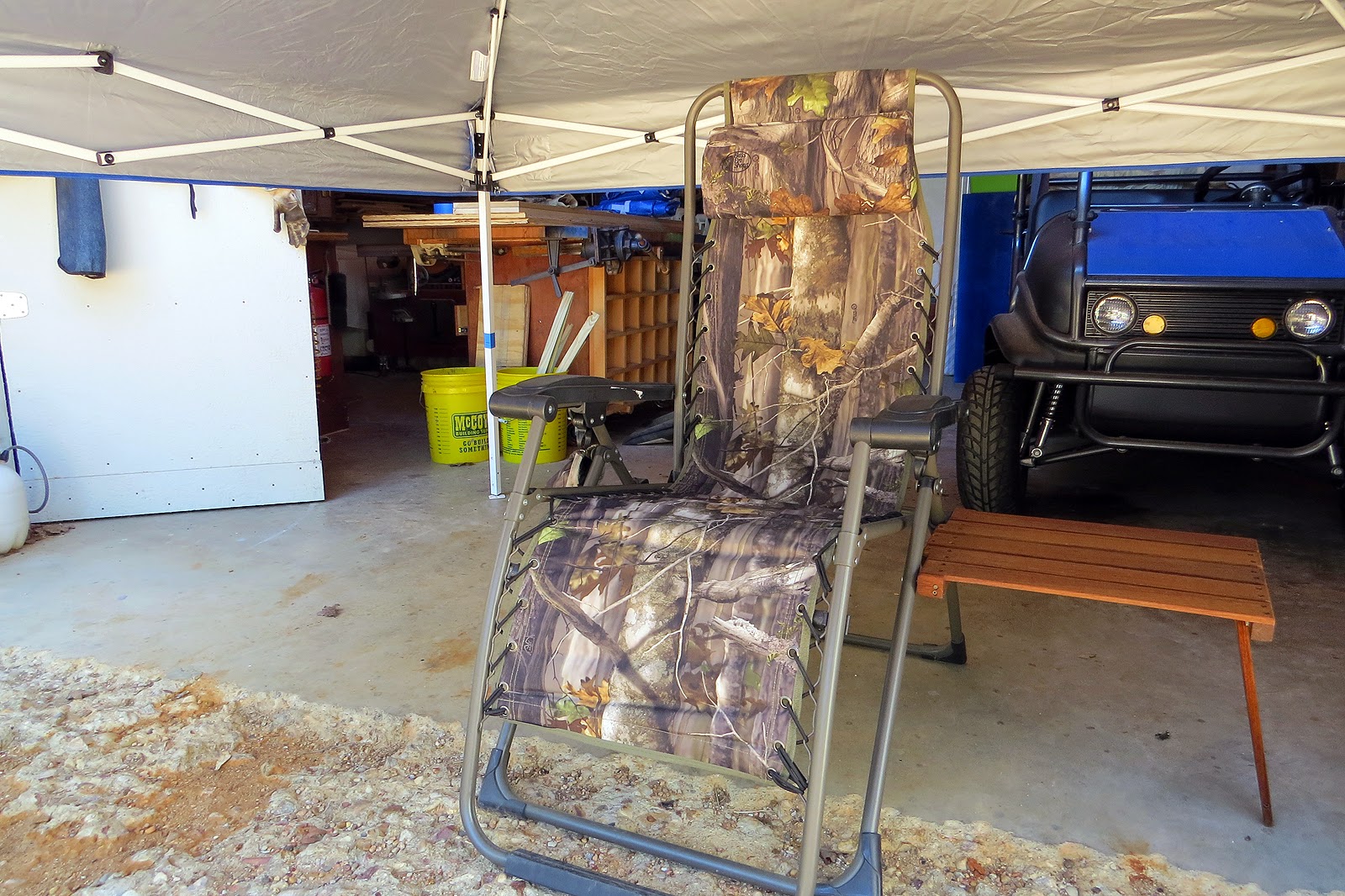 While exploring the headroom issue I found that when the legs were extended to the normal height the awning was higher than it really needed to be. By taking some careful measurements; and checking my math twice since I have been known to screw that up once in a while; I marked the legs for new holes the little spring-loaded buttons could snap into, holes somewhere between fully collapsed and way too high. In the following photo you can see the original height-adjustment holes near the bottom of the leg as well as my mark for a new hole. 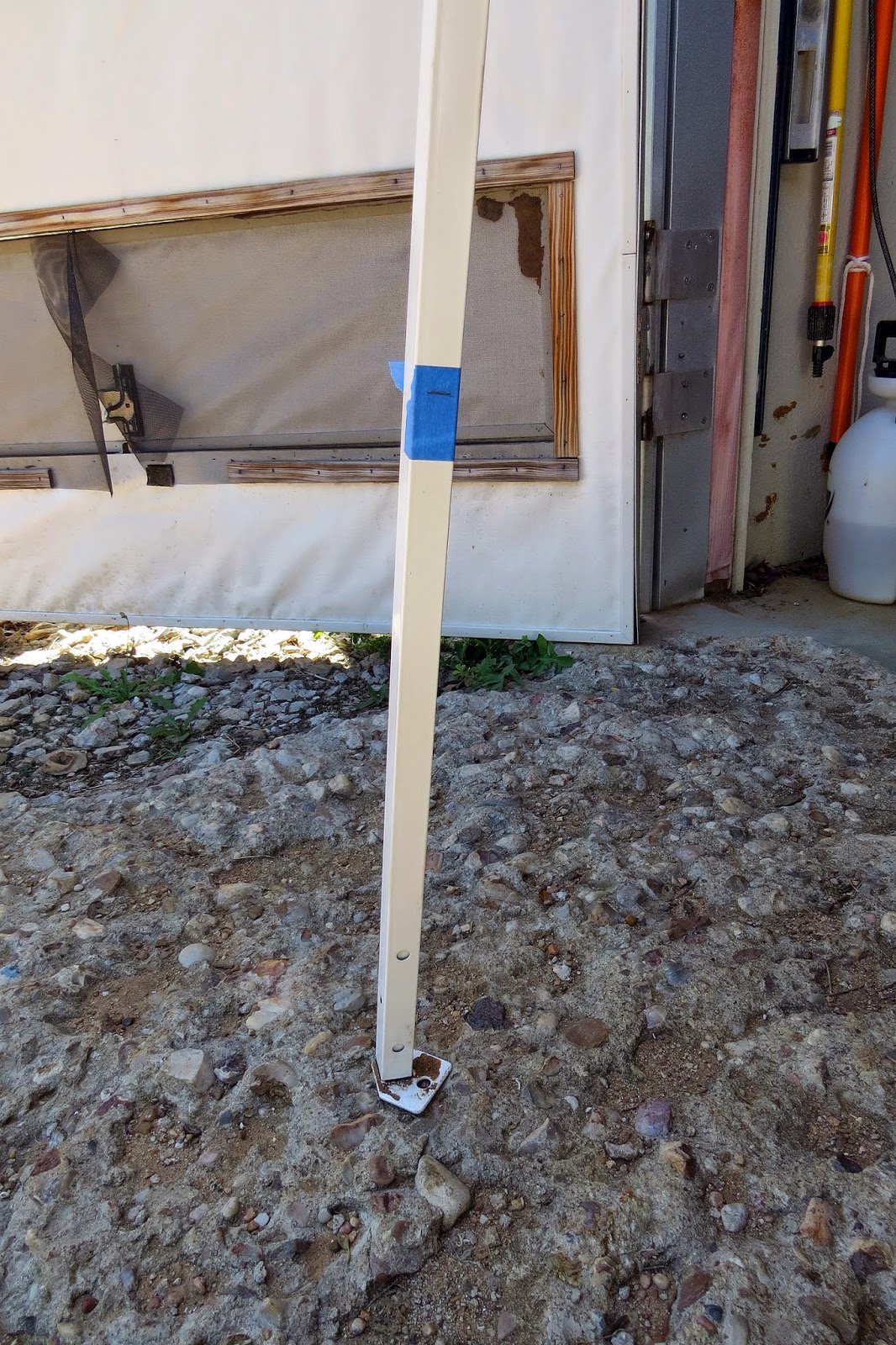 Once all 4 legs were marked I removed the inner sections, since I didn't want any extra holes in that part, and carefully drilled new holes in the outer sections. I started with a small bit and gradually worked my way up until the hole was the right size for the little silver buttons you can see at the bottom of the following photo. In addition to gradually increasing bit size rather than trying to drill it all out at once, high speed and a light touch ensured that the new holes were round and clean. 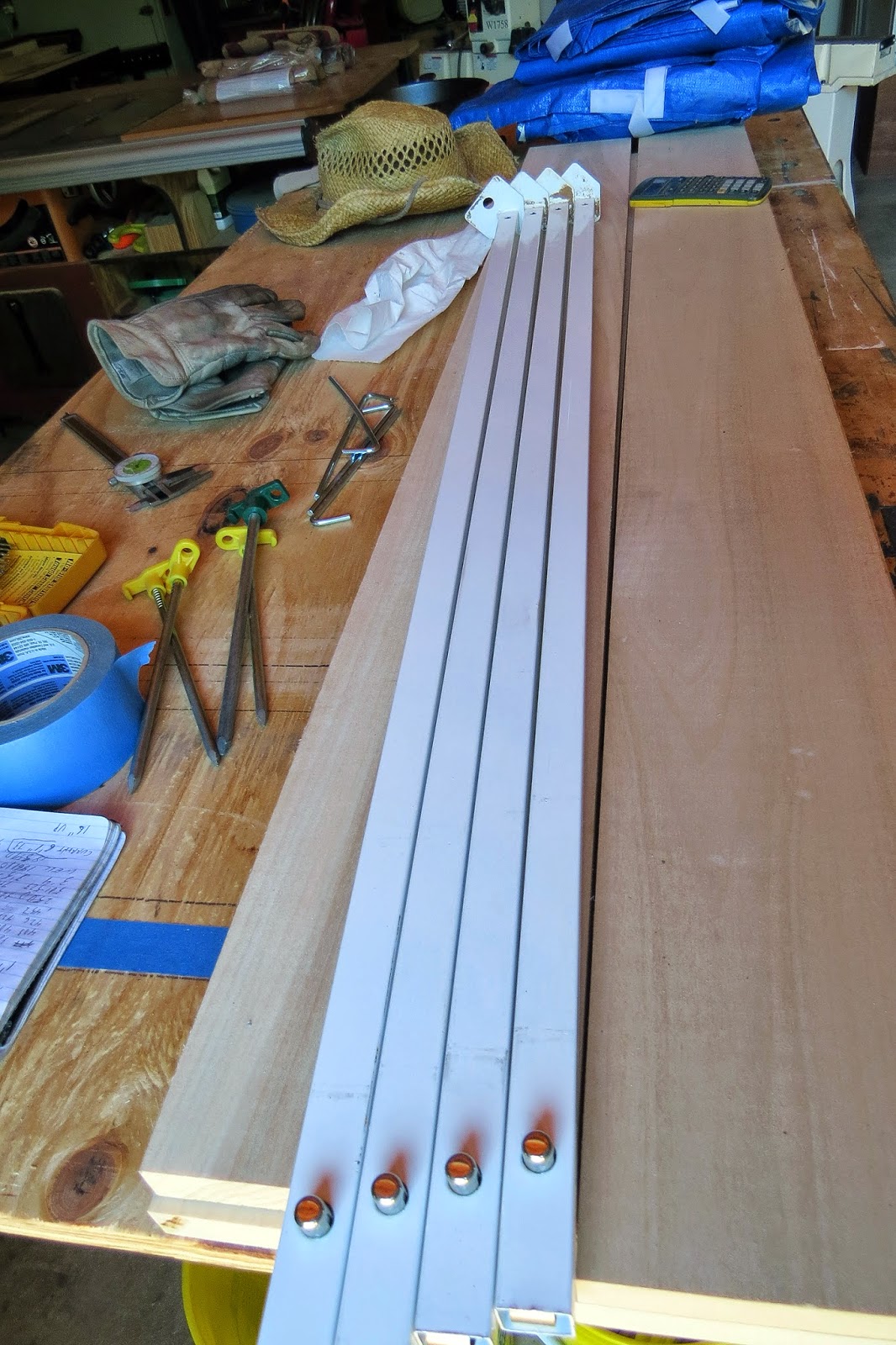 The end result is a new height option that gives just over 6' of clearance near the sides of the awning and a good 7' in the center. Of course, unless you're really short you have to duck under the little skirt around the perimeter, but, as long as you aren't really tall, (Sorry basketball star daughter) there's plenty of nicely sheltered headroom under there now. 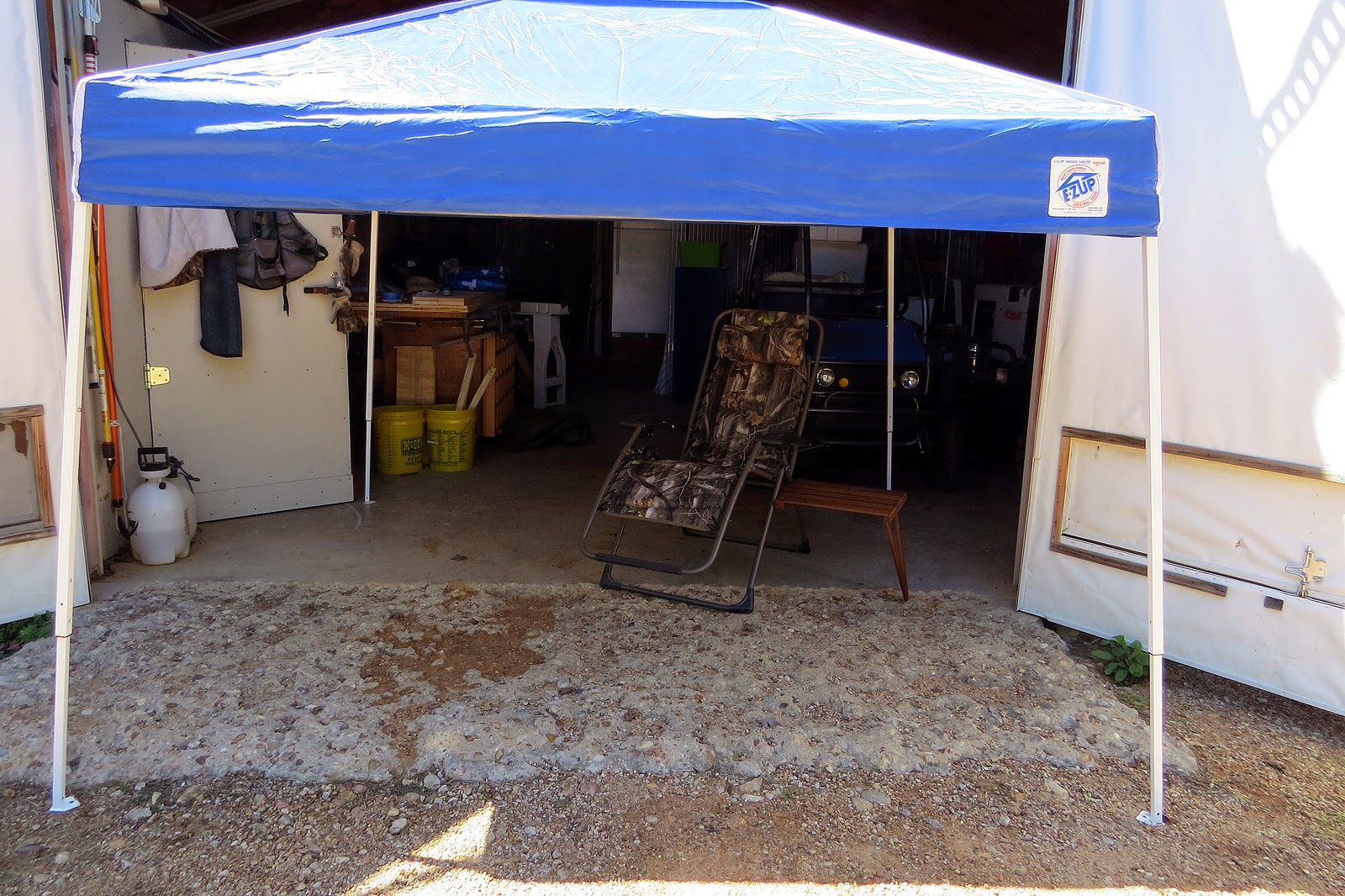 And for maximum shelter combined with maximum view while reading along the lakeshore I have the option of keeping the back legs fully collapsed and extending the front legs one notch up. 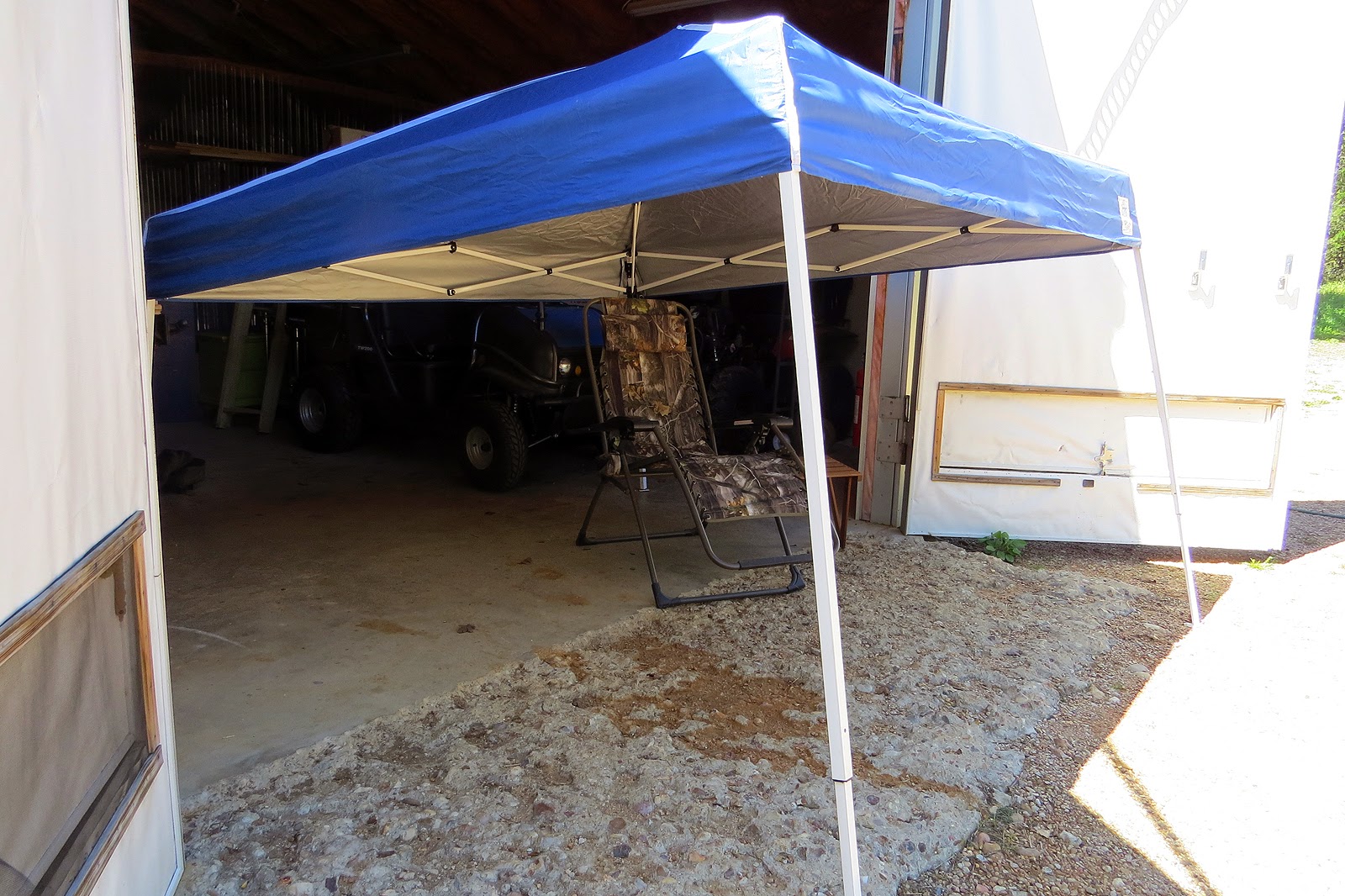 Now all I have to do is take it with me! Fortunately there's plenty of room just inside the rear door of the van to store the E-ZUP (Yep, still a pain to type) right there where it's out of the way yet handy. After getting on line and calling over to Sportsmobile, researching what was behind the nice clean white paneling, I carefully located a structural steel purlin that, hopefully, didn't have any wiring running along it that I drilled into so I could install a couple  threaded eyebolts into something solid. Breathing a sigh of relief when that was done with no disasters, (Didn't want any thready bits sticking through the outside skin now did I?) I used those eyebolts and a bungee to strap the awning in place. It's not the lightest thing, somewhere in the 20 - 25 pound range I would guess, so I don't want this thing slamming around back there! I really like these adjustable bungee cords. The fat plastic hooks won't fit into small holes like the skinny metal hooks of the non-adjustable ones will, but then normal bungee's are never the right length. Your load either falls out at the worst possible time or you bust something trying to stretch the cord beyond it's stretchability. With these adjustable ones you just pull the cord through the hook to the right snugness and lock it down into the teeth. Perfect length every time. 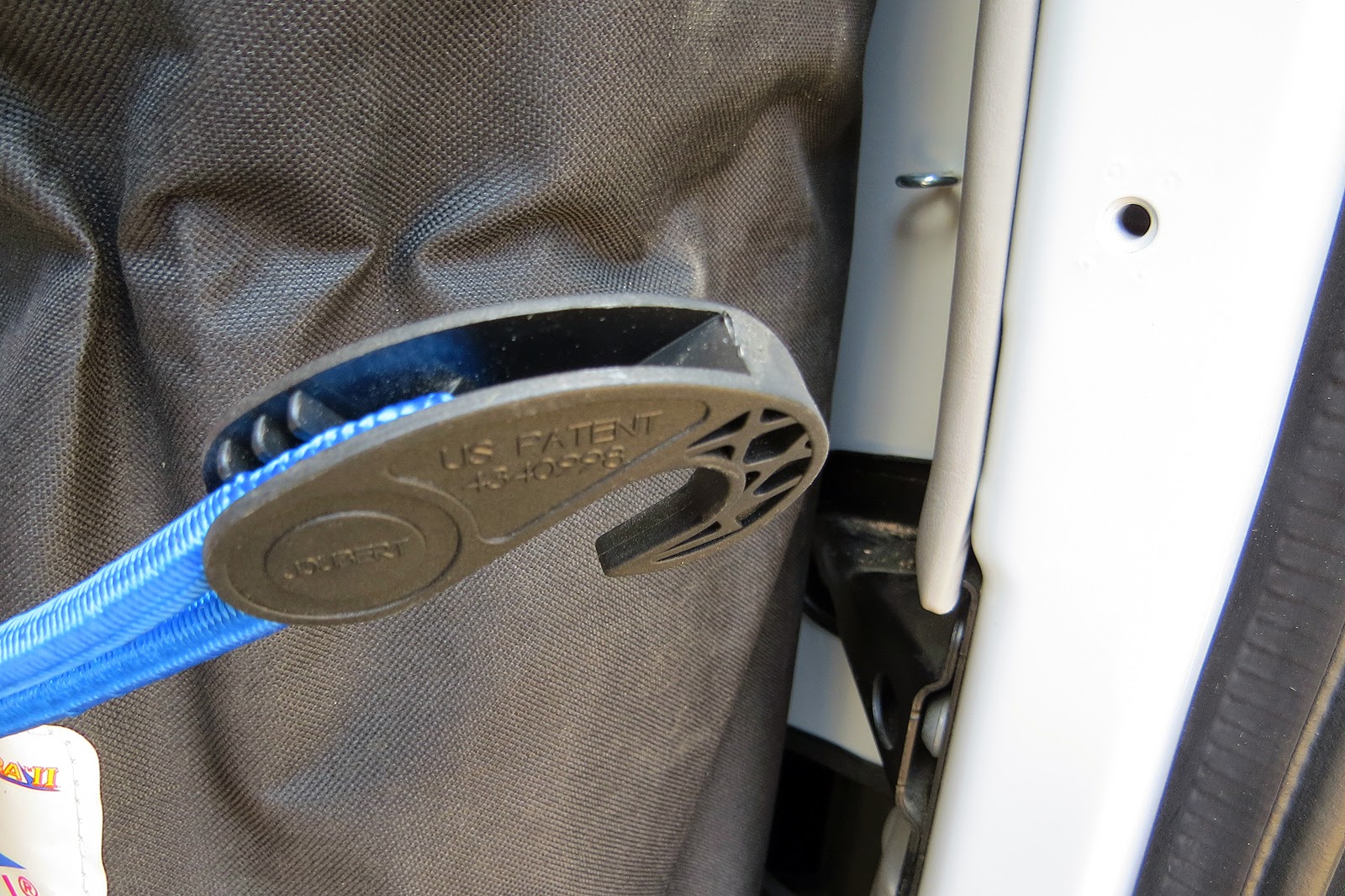 Now all I need is a string of solar LED party lights to string up and I'm all set to go!
On second thought, I might have to throw a party to go with the party lights and, as I once told a person trying to hand me a brochure for Red Lobster party platters, 'Do I look like I have enough friends to throw a party???'
Posted by greg at 9:11 PM