I left camp early this morning and hiked up to the bird feeding station (Pedernales Falls State Park.)

The first half of February is clearly not the best day on the calender for birding, even here in the Texas Hill Country, but this feeding station is a pleasant place most any time with it's courtyard flanked by two glass-front viewing stations, each with seating and photo portals.

Besides, it's not like I had any other pressing engagements.


As expected, other than the woman scouting for the Audubon tour she would be guiding next week, who was just leaving as I arrived, the station was empty of people, and almost empty of birds.

Almost empty of birds, but not quite. 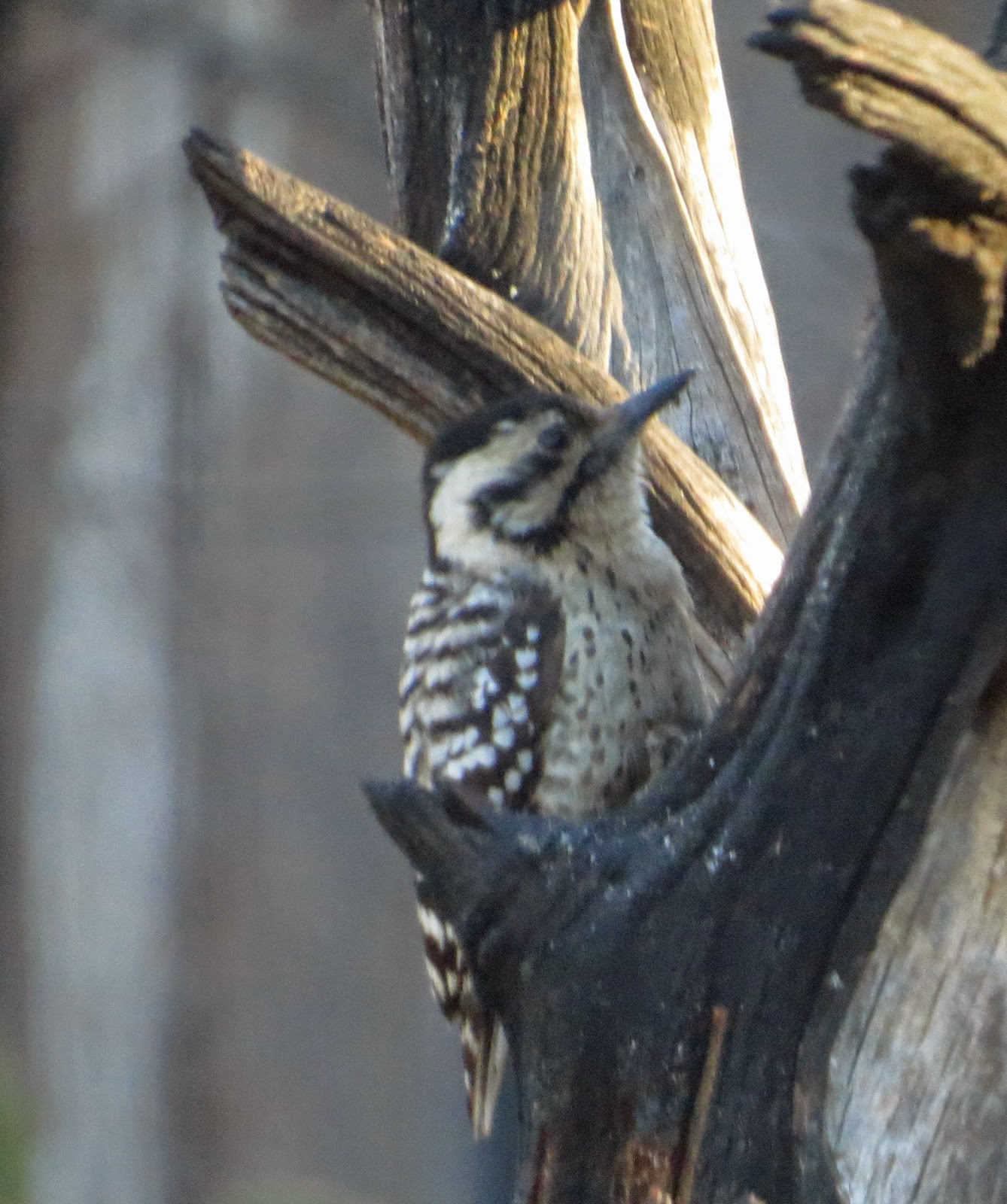 With the place all to myself I chose the best seat in the house and parked myself there in this quite, gentle spot, but it wasn't long before I was freaking out because I hadn't brought my Sibley Guide to Birds with me and the Audubon lady had already left and now I wasn't going to know for sure THE NAME OF EACH AND EVERY BIRD I WAS LOOKING AT!!!!

OK, head between the knees; take deep breaths; keep it up, you're doing just fine: get your heart-rate back out of the stratosphere; relax; everything's going to be alright. . . 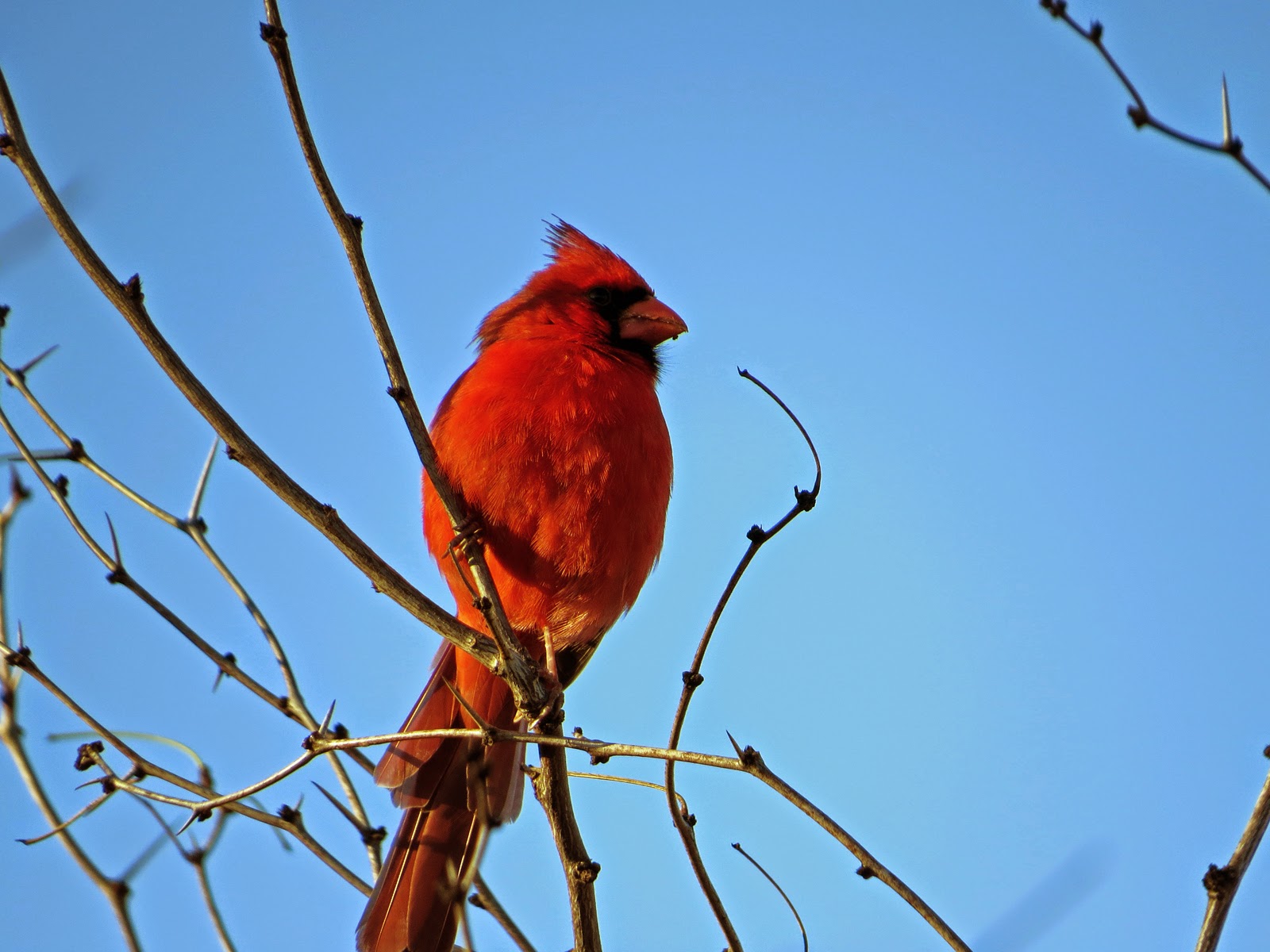 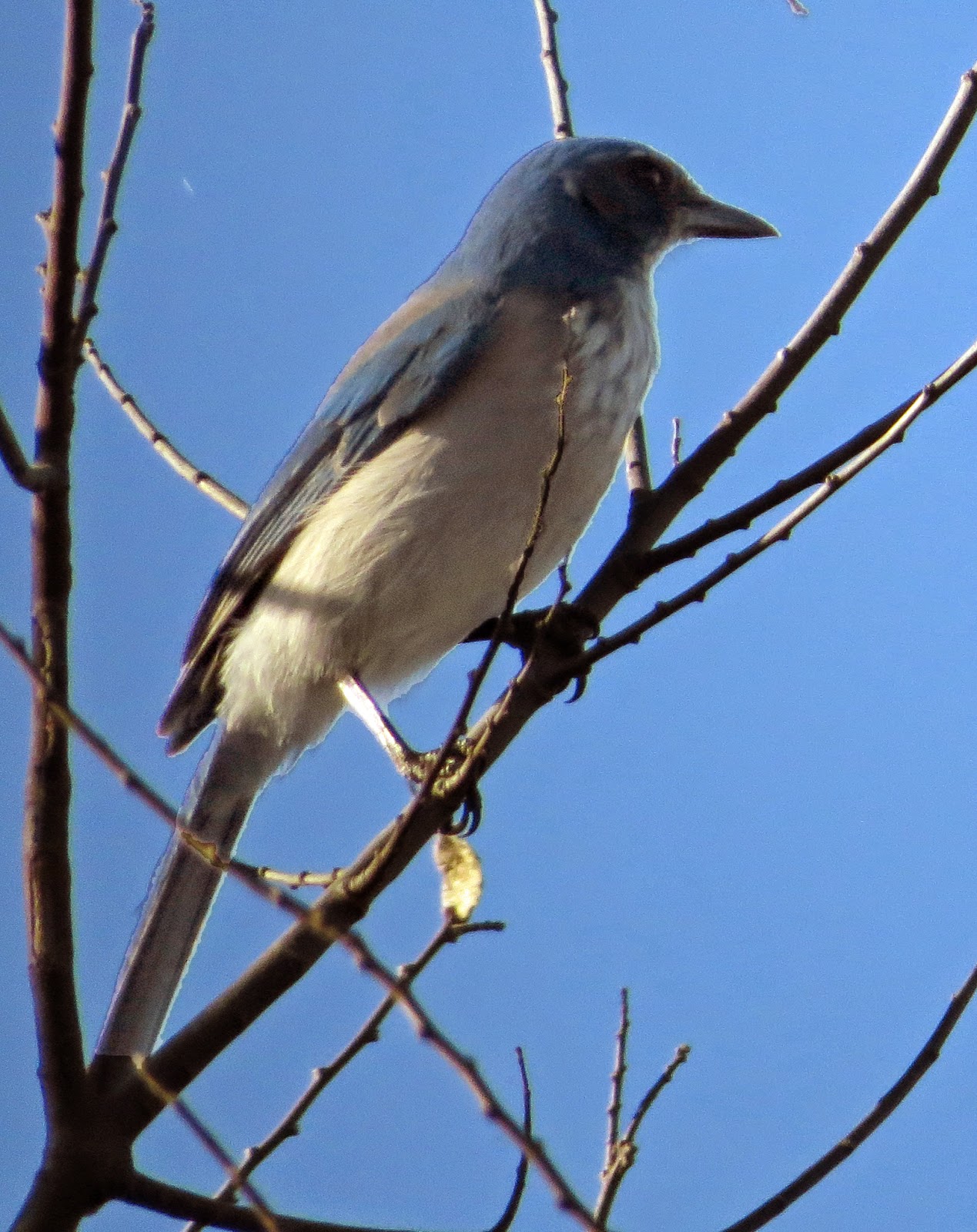 I understand where my need to keep score comes from, why I have a compulsion to label every bird I've seen, identify every tree, count every mile I hike down to the tenth, clock how fast I can get from here to there. It's an evolutionary thing and it's not easy to escape evolution!

After all, how's a girl supposed to know which boy will grow up to be the fastest runner (I don't have to outrun the bear, I only have to outrun you!) and best provider without keeping score? How's a guy supposed to know which is the best woman to spit out his kids and raise them with one hand while gathering firewood with the other if there's no scorecard to rank them with? Or in the more modern context, how are you supposed to know who among the competing hopefuls deserves to make the next step up the corporate ladder or which of the neighbors has the most toys if nobody is keeping score?! 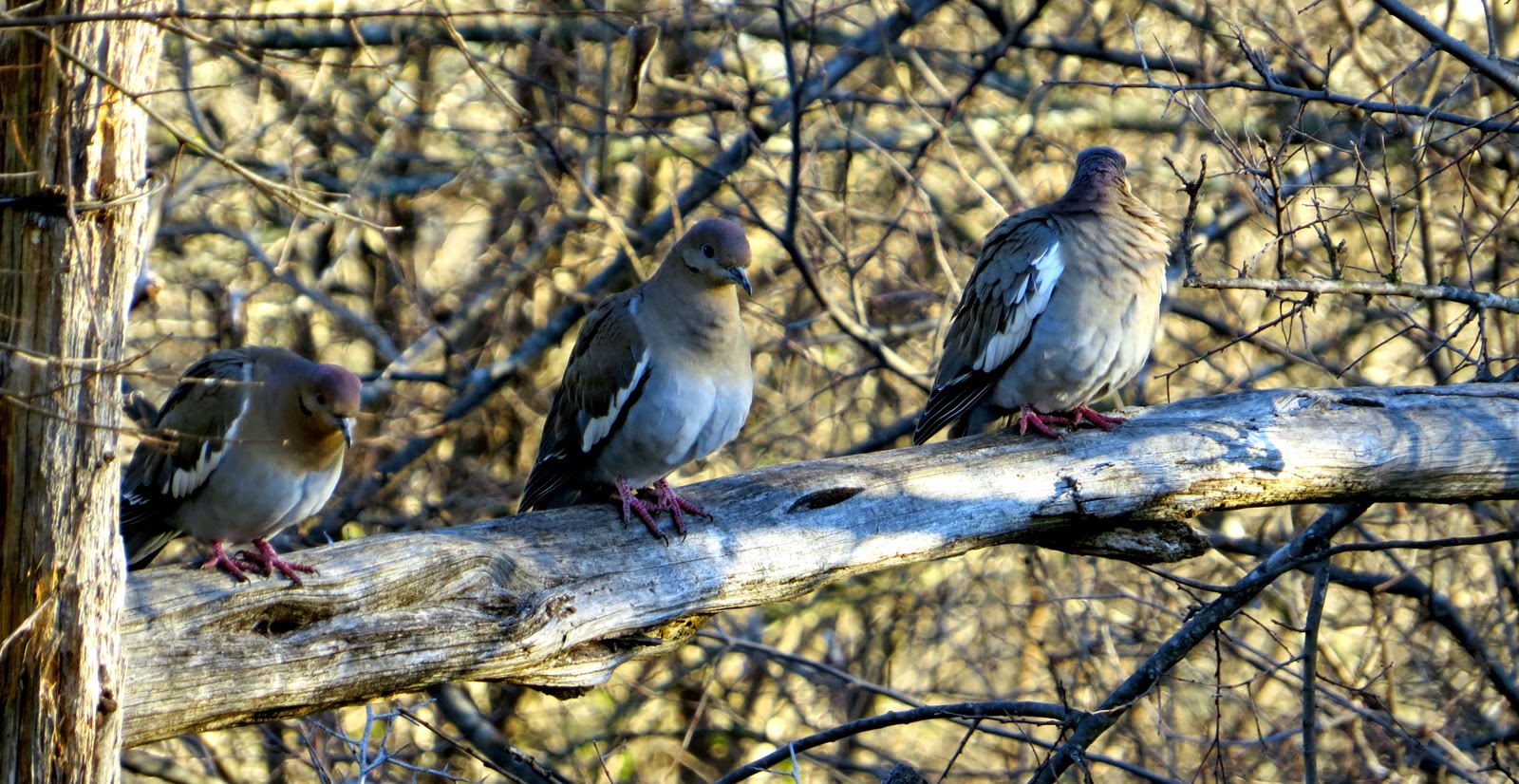 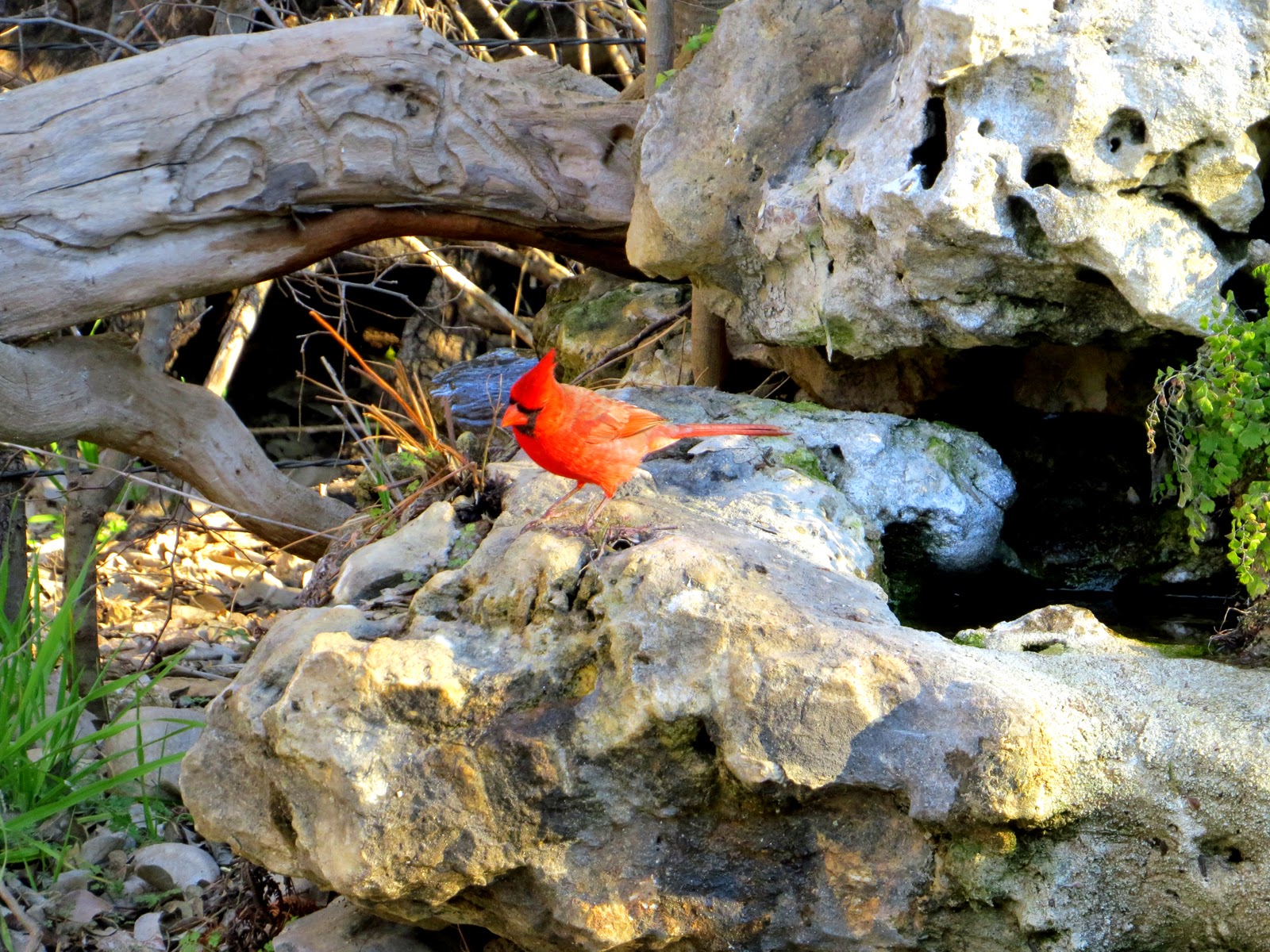 But the hard fact is that evolution is all about creating stock that can survive long enough to breed and raise offspring to the point where they too can breed. This requires lots of different traits, but among the things evolution doesn't give a flying hoot about (Get it!? Birds, owls, hoot!!!) is an individual's ability to be content and find enjoyment in just being there.

But even understanding all this, it still took some effort to overcome my reptile brain and not fret over specifically which of the many types of sparrows those were flitting around over there in the branches, or whether I would know a Towhee if I saw one (The Audubon lady mentioned she could hear a couple of them singing out there somewhere.) but eventually I managed to (mostly) set aside the compulsion for score-keeping and sat back to enjoy the birds just being birds. For a little while there I managed not let the wonders of the Universe slip by unappreciated because I was too busy checking things off on my scorecard.

In addition to the lowered heart-rate and increased alpha brainwaves, the upside of this conscious exercise in overcoming my baser instincts is that I ended up hanging around long enough for Don, the Park Volunteer, to show up for the 0830 feeding. Don is an interesting guy who used to live in the world of corporate finance and now is very enthused about his life wandering around full-time in a vintage 70's travel trailer as a Texas Parks and Wildlife Volunteer. In fact Don was so enthused I'm afraid that by the time we finished enthusing all over each other the bird's morning feed was almost an hour late!

So the take-away here (Oh no! Corporate speak is still part of my language!) is that the scorecard might have it's place, but it isn't always necessary. And clearly, I still need to work on embracing that lesson.


OK, I just couldn't resist: From bottom to top: Northern Cardinal, White Wing Dove, Scrub Jay, Cardinal again, Ladder Back Woodpecker probably young, and something with the wing bars of a Blue Jay but no crest or neck ring so has the head of a Scrub Jay, maybe a hybrid?

Damn! I guess I still have some work to do on putting down the scorecard. . .