Out there north of Fredricksburg Texas lurks a mammoth batholith  of pink granite. (Also apparently called a plutonic but my ancient language skills are not up to explaining why.) To a geologist this igneous batholith is a chunk of roughly 1 billion year old Town Mountain Granite of the Middle Precamrian that intruded into an even older metamorphic schist called Packsaddle Schist. 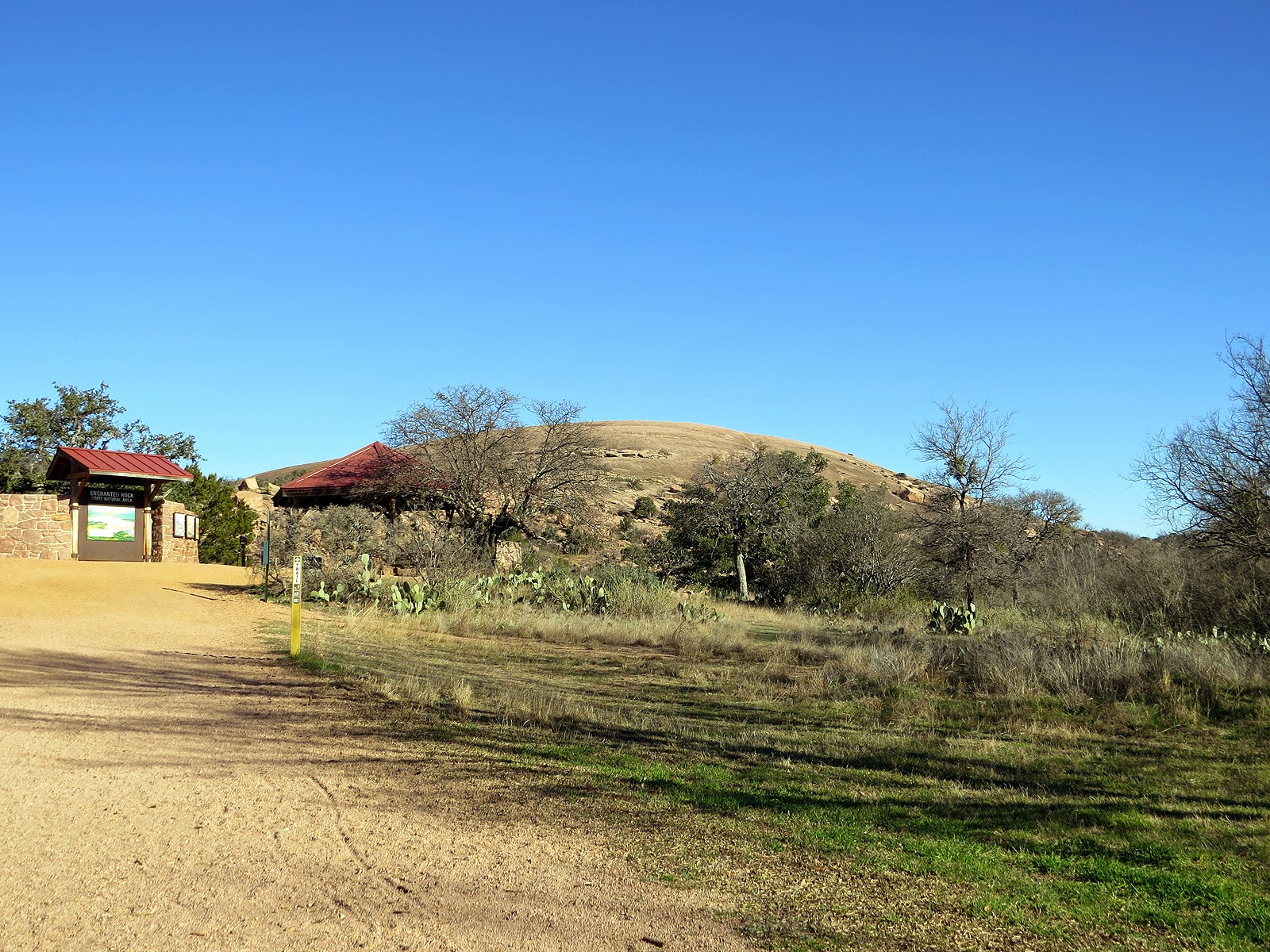 If that made your eyes glaze over, as it did mine when I looked it up, you might find the little bit of this batholith that sticks up above ground level more interesting. This is a 640 acre bubble that erosion has exposed at one end of the 63,000 acre granite formation (The information plaque in the gazebo visible in the photo above states that that's 3 times the size of Manhattan. For someone that knows Manhattan I suppose that means something, but for the rest of us - huh?)

That bubble is called Enchanted Rock and since 1984 has been part of the State Park system.

The camping here is walk-in tent camping only which is why the van and I were staying some 60 miles away at Pedernales Falls State Park. (There are commercial campgrounds much closer but that just didn't sound very appealing.) With the sun still lurking below the horizon I set off and took a few of the lesser roads, as in cattle guards and low-water crossings, across ranch country to get here.

I approached the park from the east on  FM965 and with the sun behind me had some spectacular views of the monolith as I approached. Unfortunately those views have resulted in about 9 miles of FM965 being designated a no-parking zone and without another set of hands in the van to handle camera duty I didn't get any shots on the way in. I did go looking on the web for a few but apparently very few photos are taken of Enchanted Rock from this approach, at least none I could find. I guess those no parking signs way out in the middle of nowhere really work.

In the photos it's especially apparent, but even in person the scale of the place is deceptive. 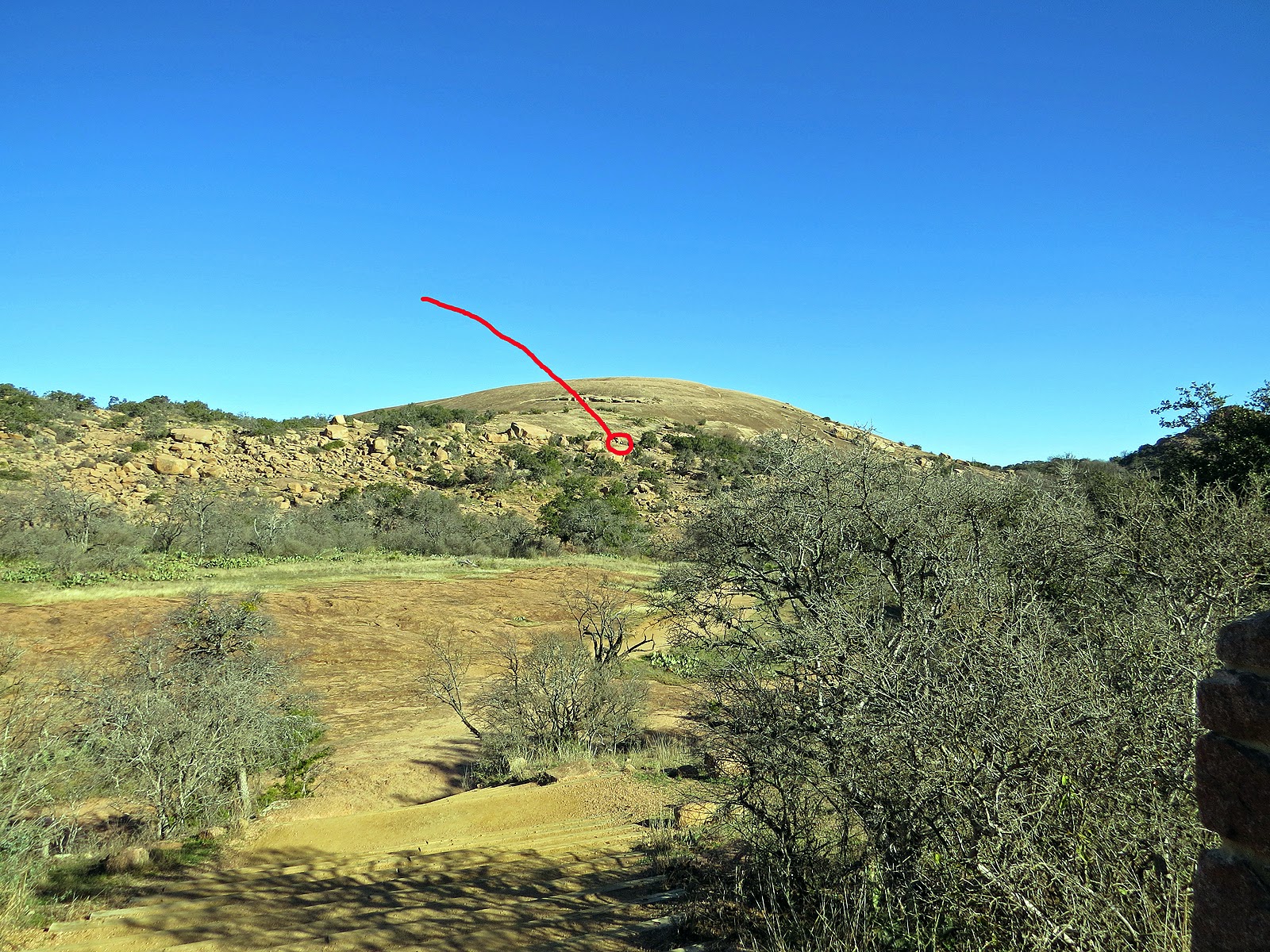 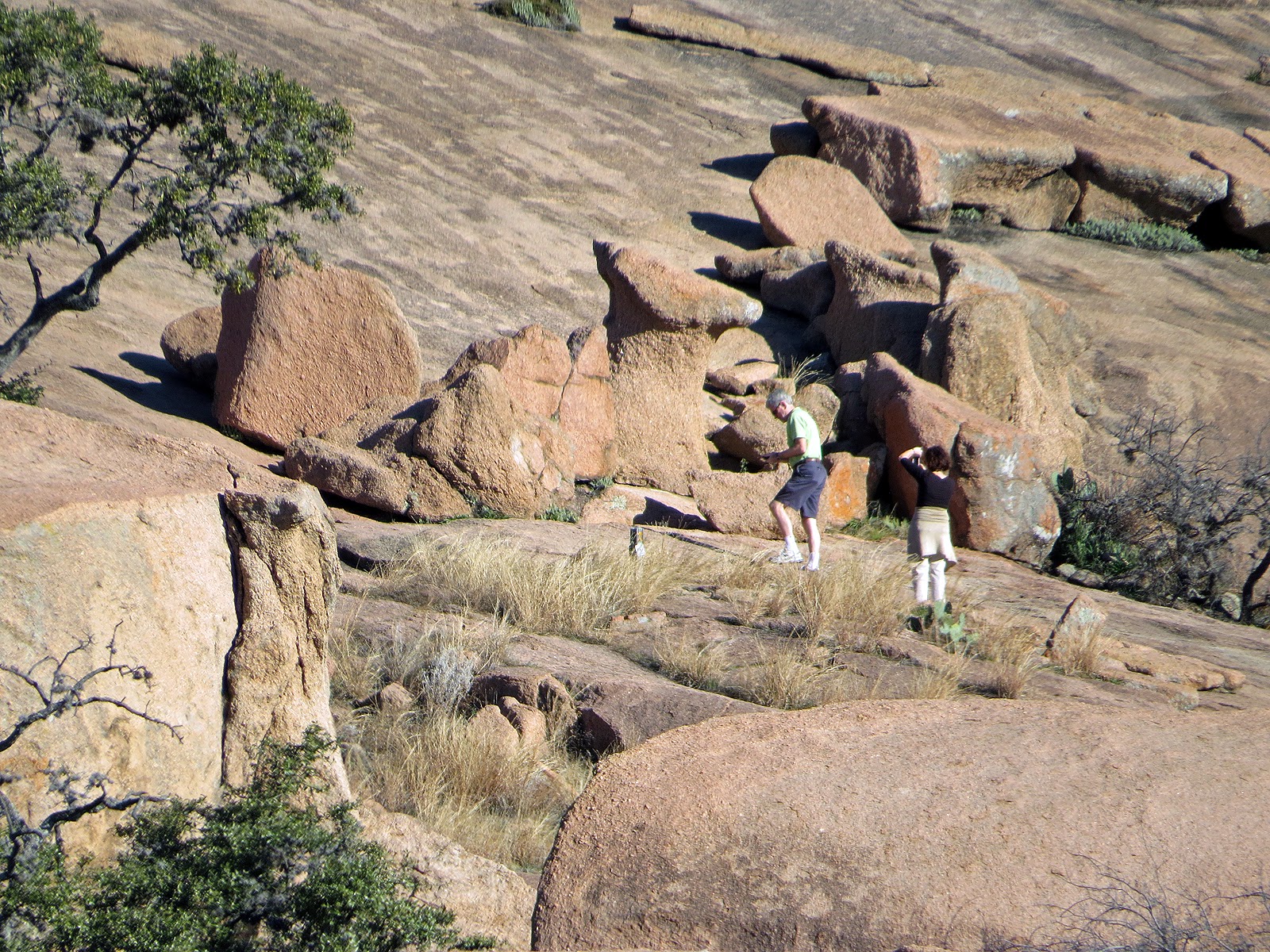 these hikers were. To get this shot, taken from the same spot and nearly the same time as the previous photo, I used a 1200mm lens.

The climb from gazebo to rock-top is approximately equivalent to 40 stories of stairs! As I was taking these photos a gentleman about my age dragged himself painfully up the last few steps past me and collapsed on a handy bench. He didn't look too good and sounded even worse! I don't know if he made it all the way to the top or not but whatever he did I'm pretty sure he was wishing he hadn't, and suddenly things weren't looking too good for me either at the moment!

But being the intrepid soul that I am, (OK, some just call me stubborn and foolhardy but I've gotten pretty good at ignoring them.) onward and upward I went. 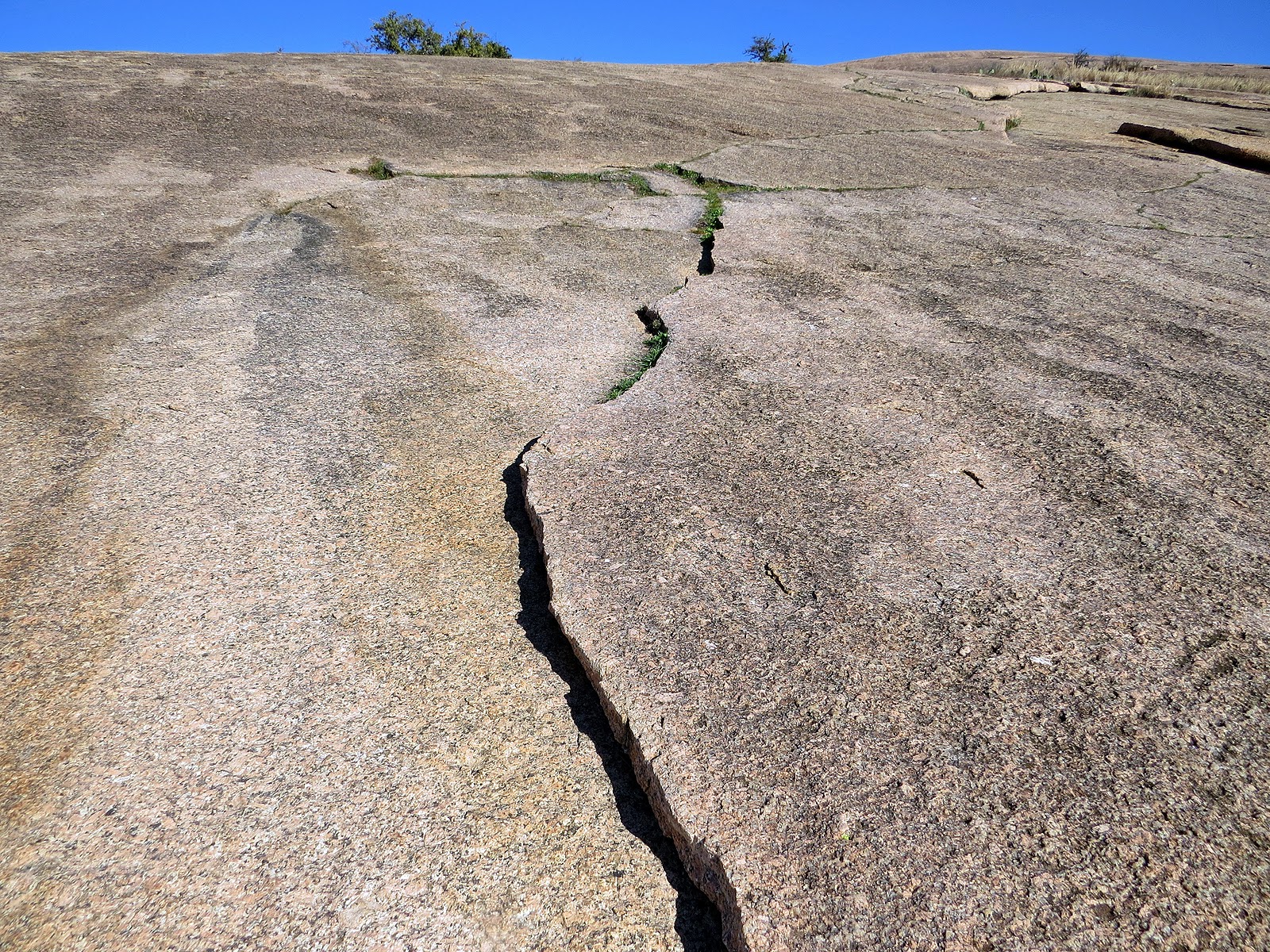 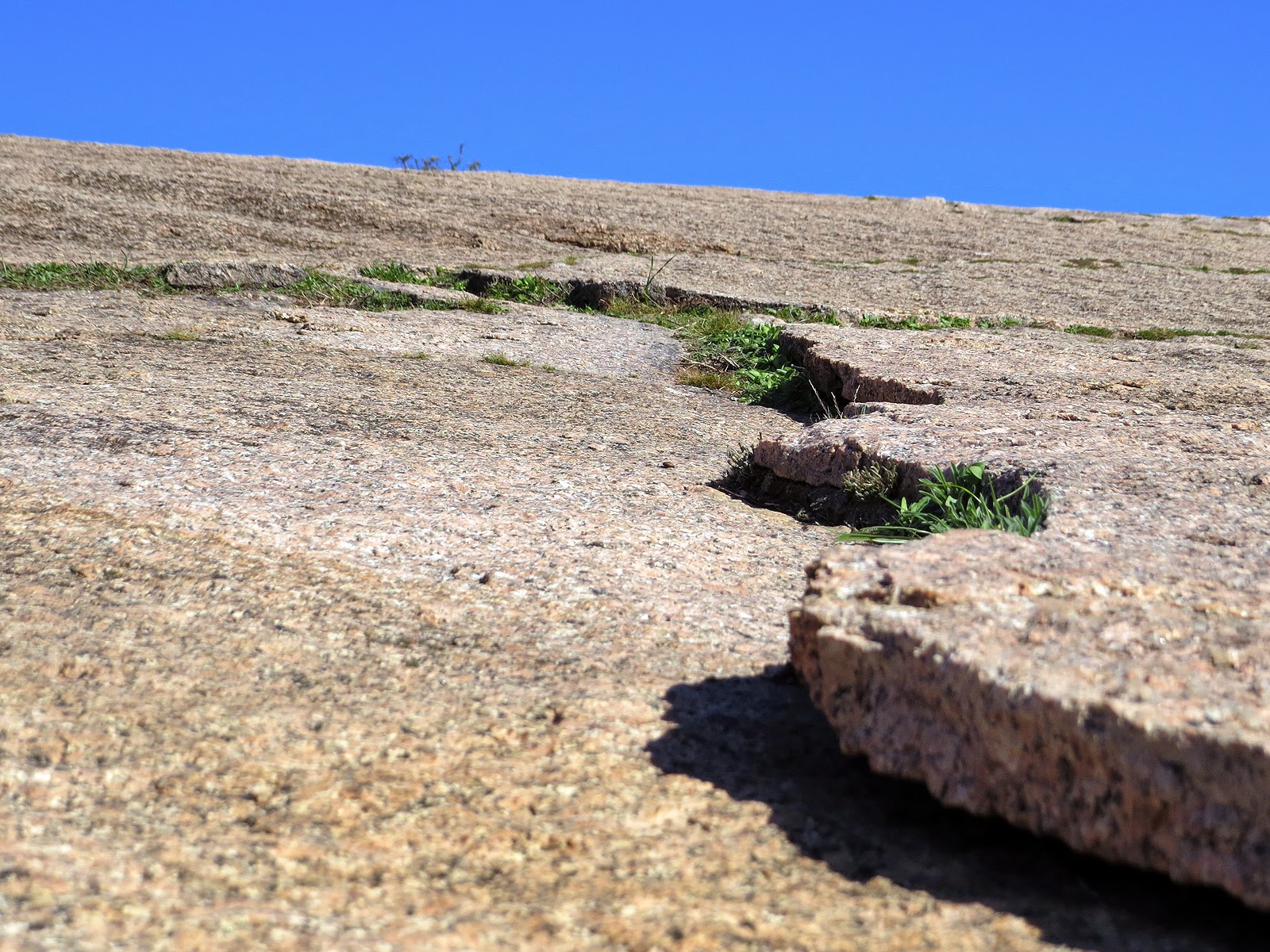 The footing is pretty secure (Though I might not want to try it in the rain!) and, though there are some dangerously steep areas up there, a little careful routing keeps you on more reasonable slopes.

It might look solid but the rock is actually layered like an onion and gravity is in the process of peeling these layers off one by one. In some cases, as in these two photos, the layers are only a few inches thick, but in other spots the layers are more like 10 to 15 feet thick. I imagine it would be a pretty spectacular ride to get caught up by one of these as it broke loose and slid down the dome, but fortunately that didn't happen, although, during the frequent breaks on my slow, slogging way up the rock, once in a while I could hear it tick and thump as it adjusted itself to the warming sun! 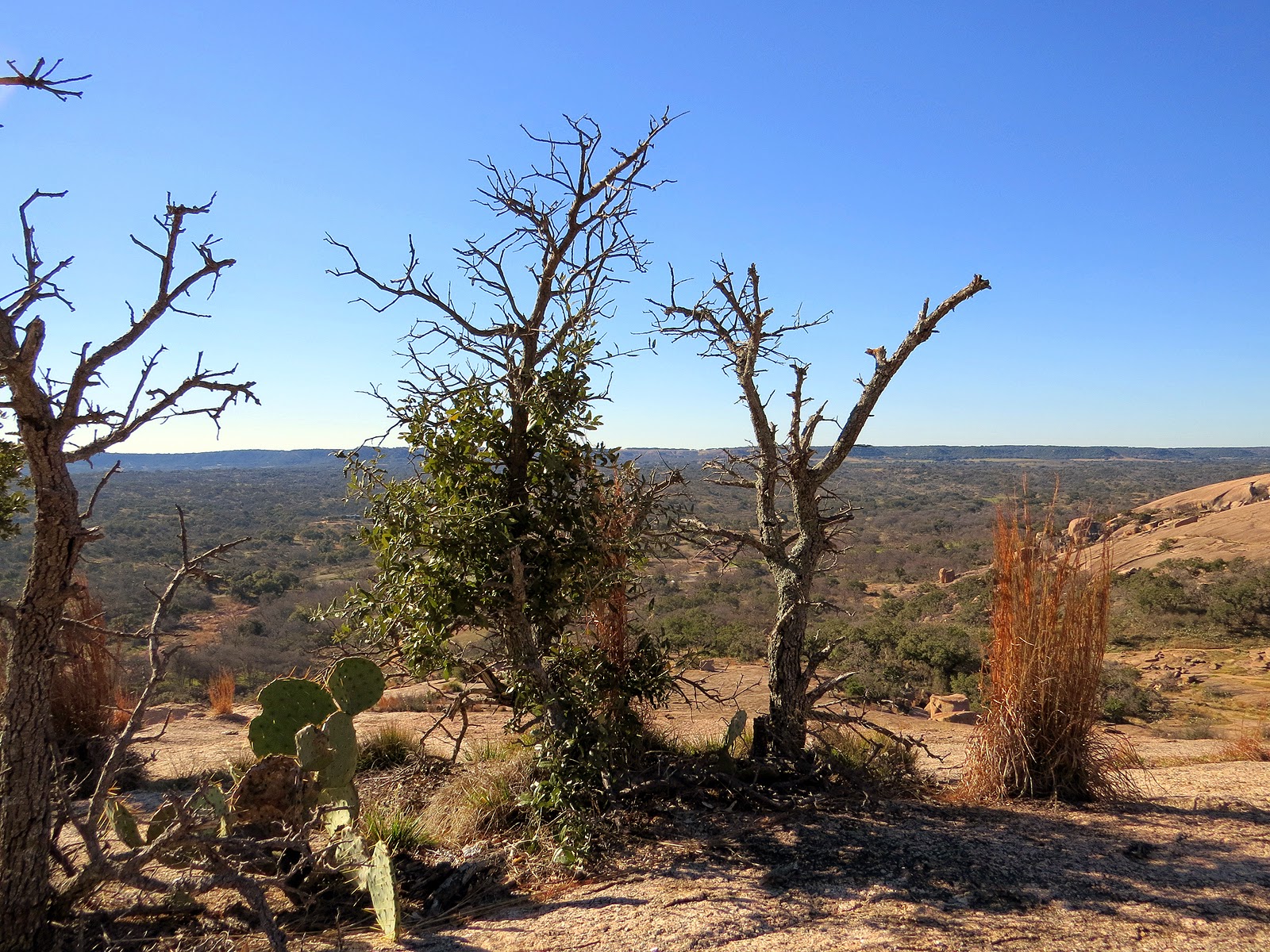 Oddly enough, on the summit are several patches of vegetation clinging, and I do mean clinging since can get windy up there! to the otherwise bare rock. 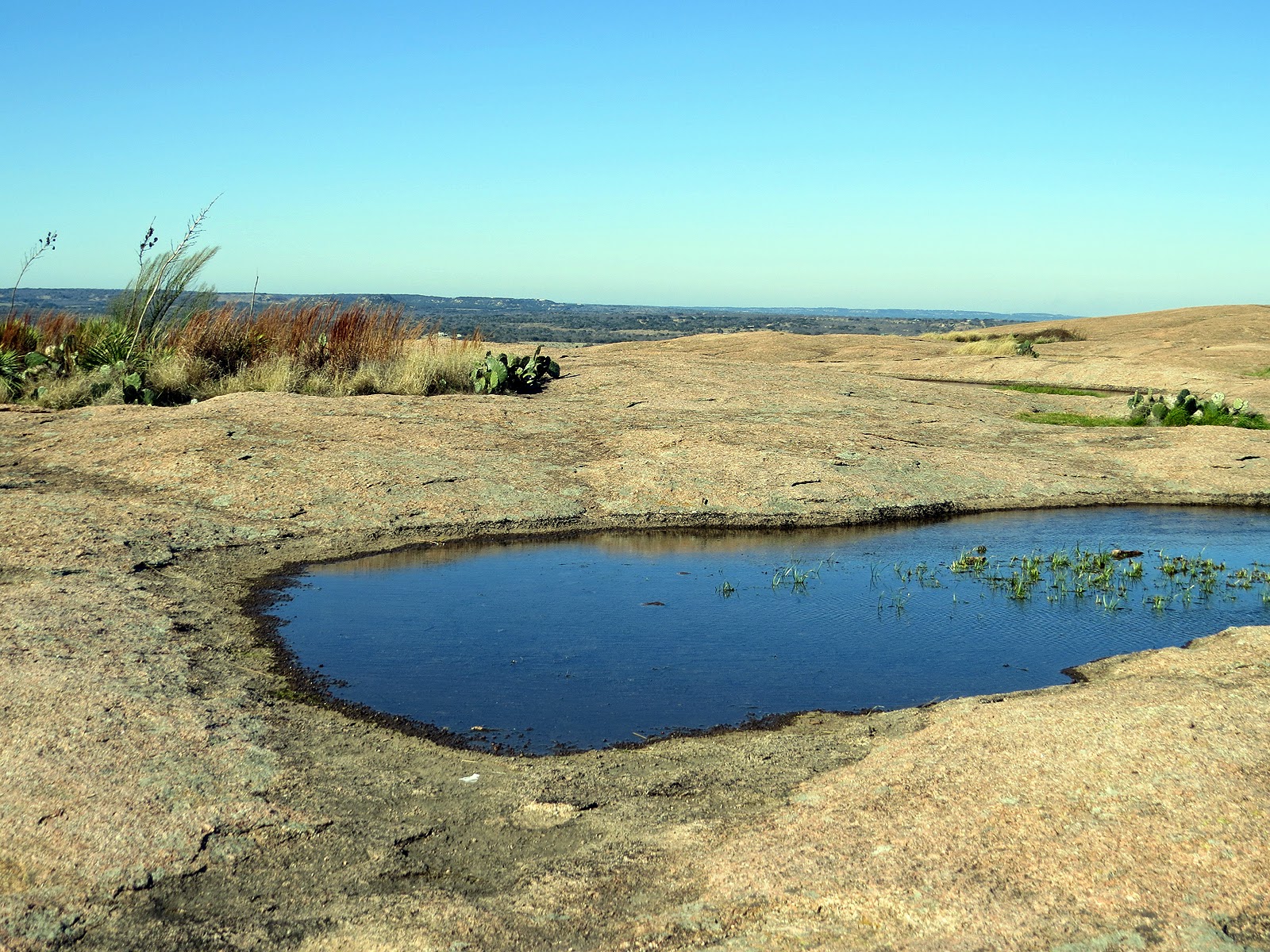 It starts with little depressions on the top of the dome, some of which will hold water for several weeks at a time and are called Vernal Pools. 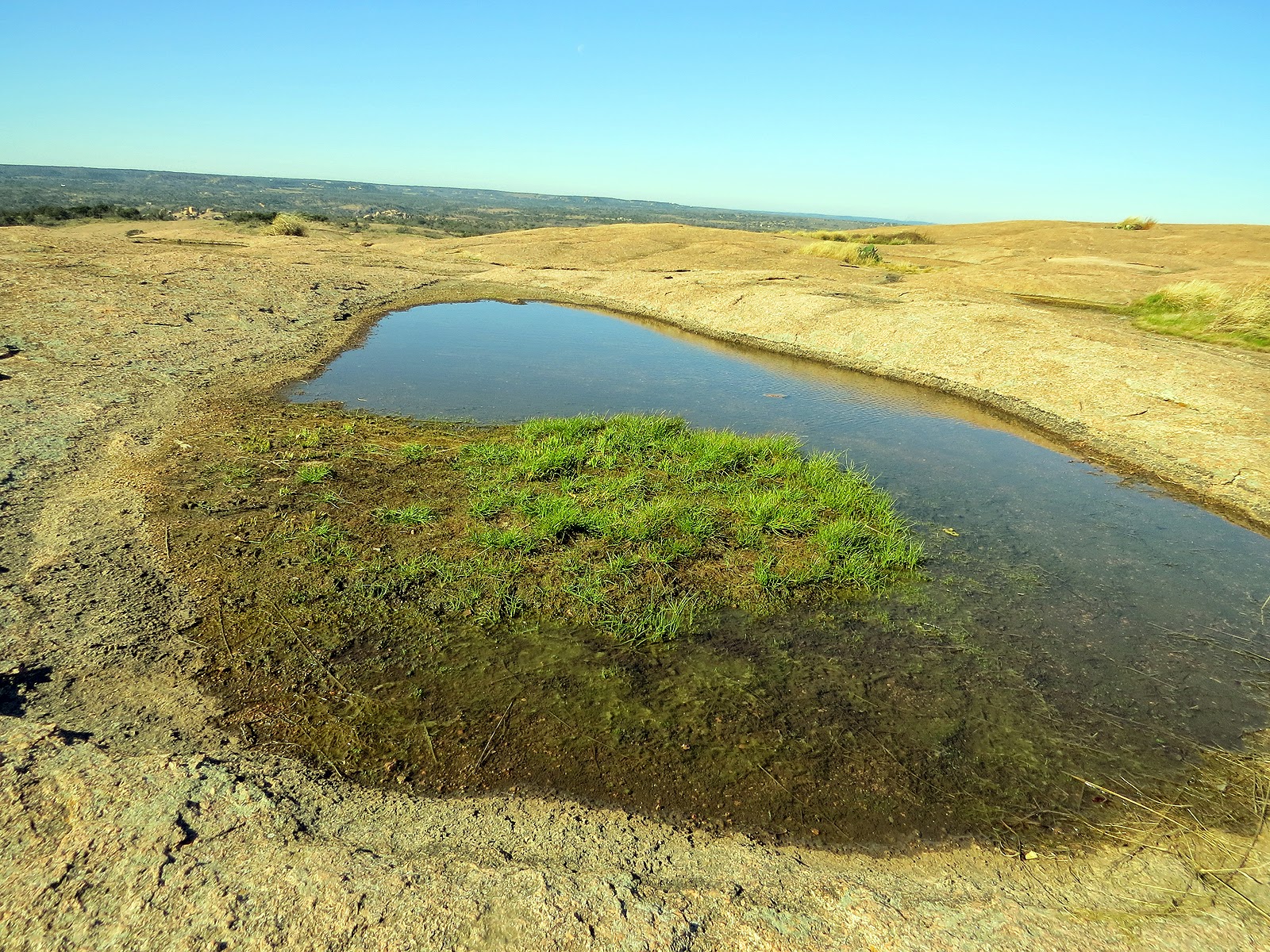 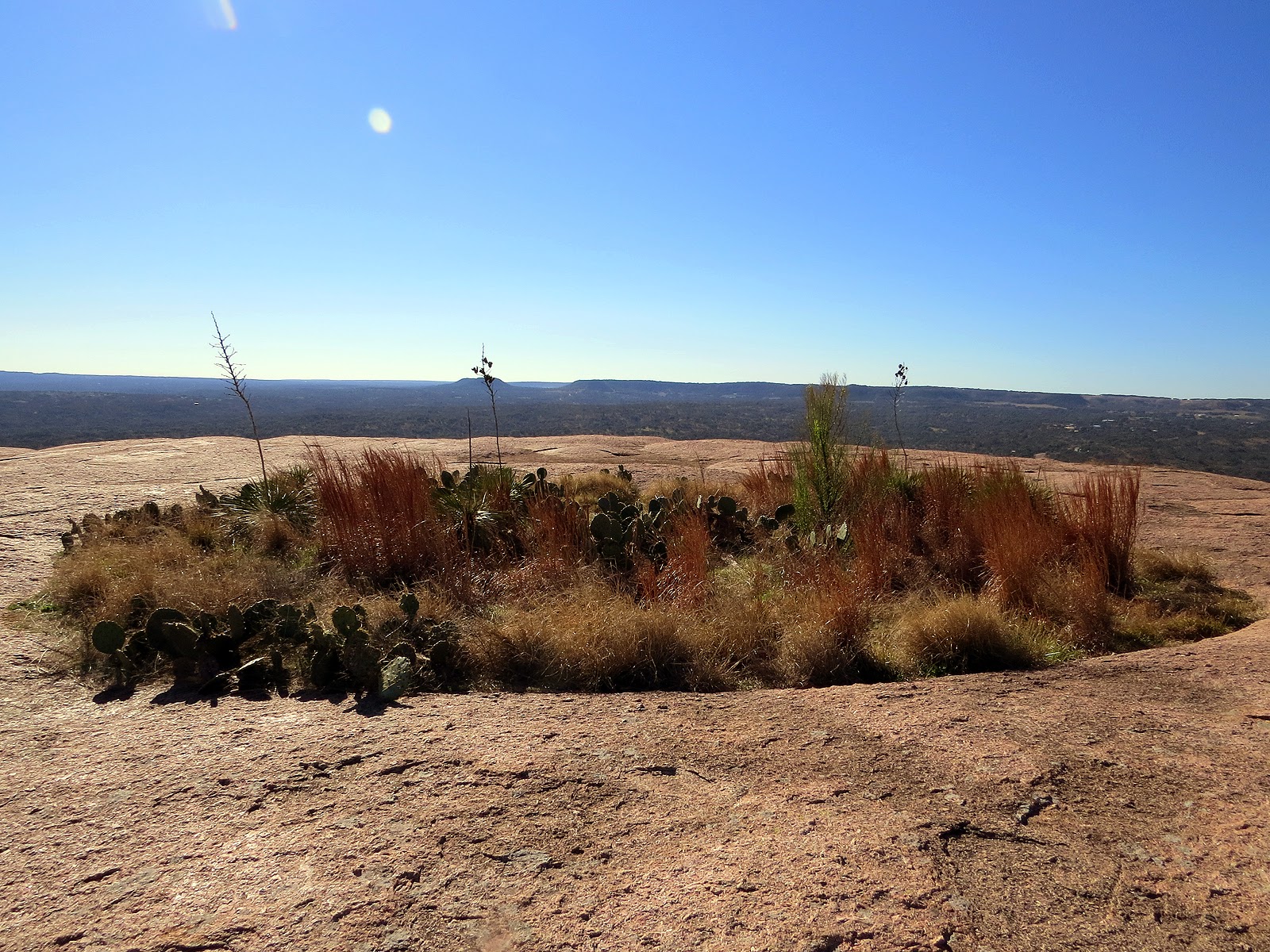 until eventually there's a whole little habitat up there. 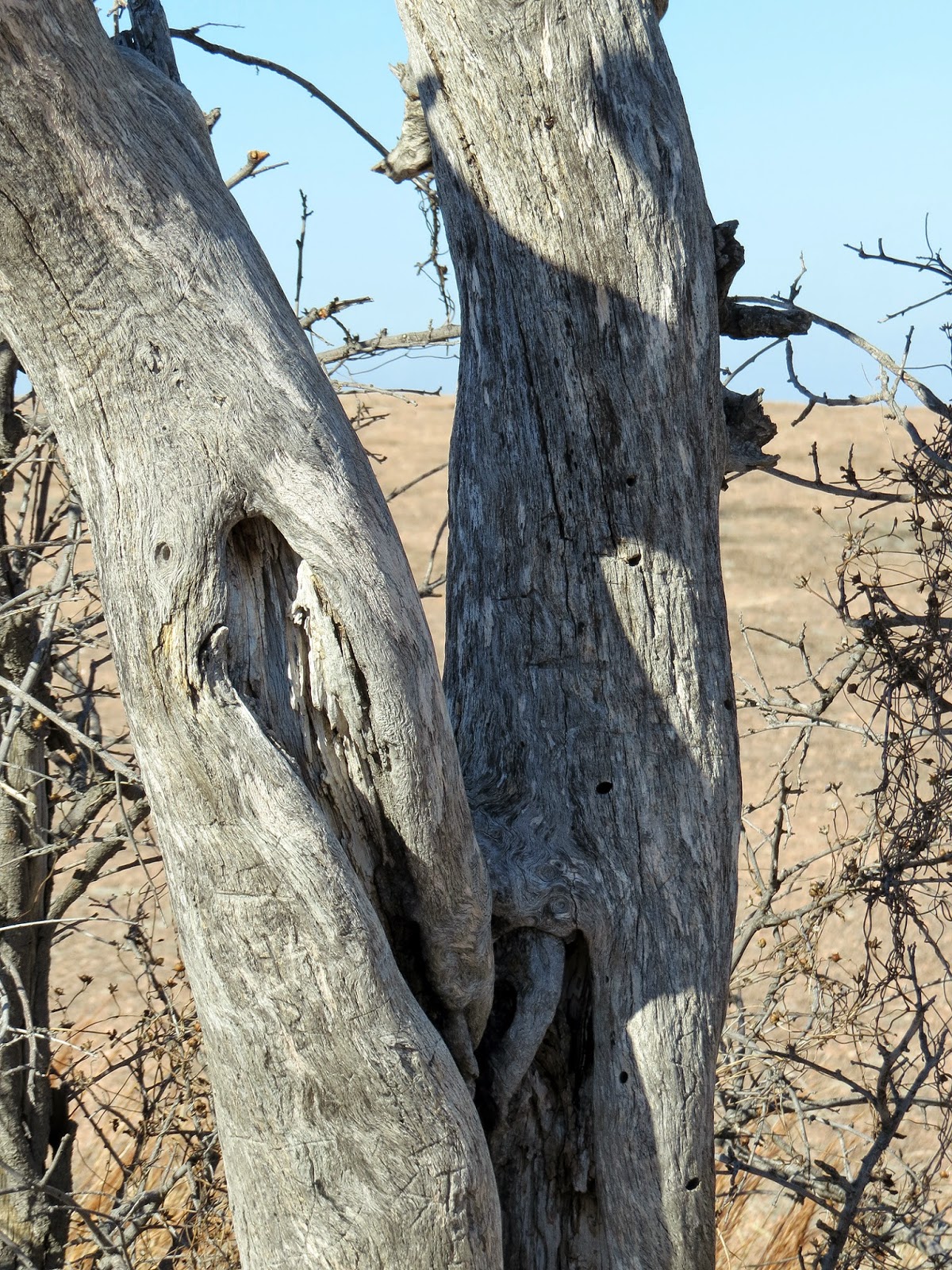 But it's clearly a harsh environment and I'm amazed that something could manage to hang on long enough to become as large as this before finally succumbing. 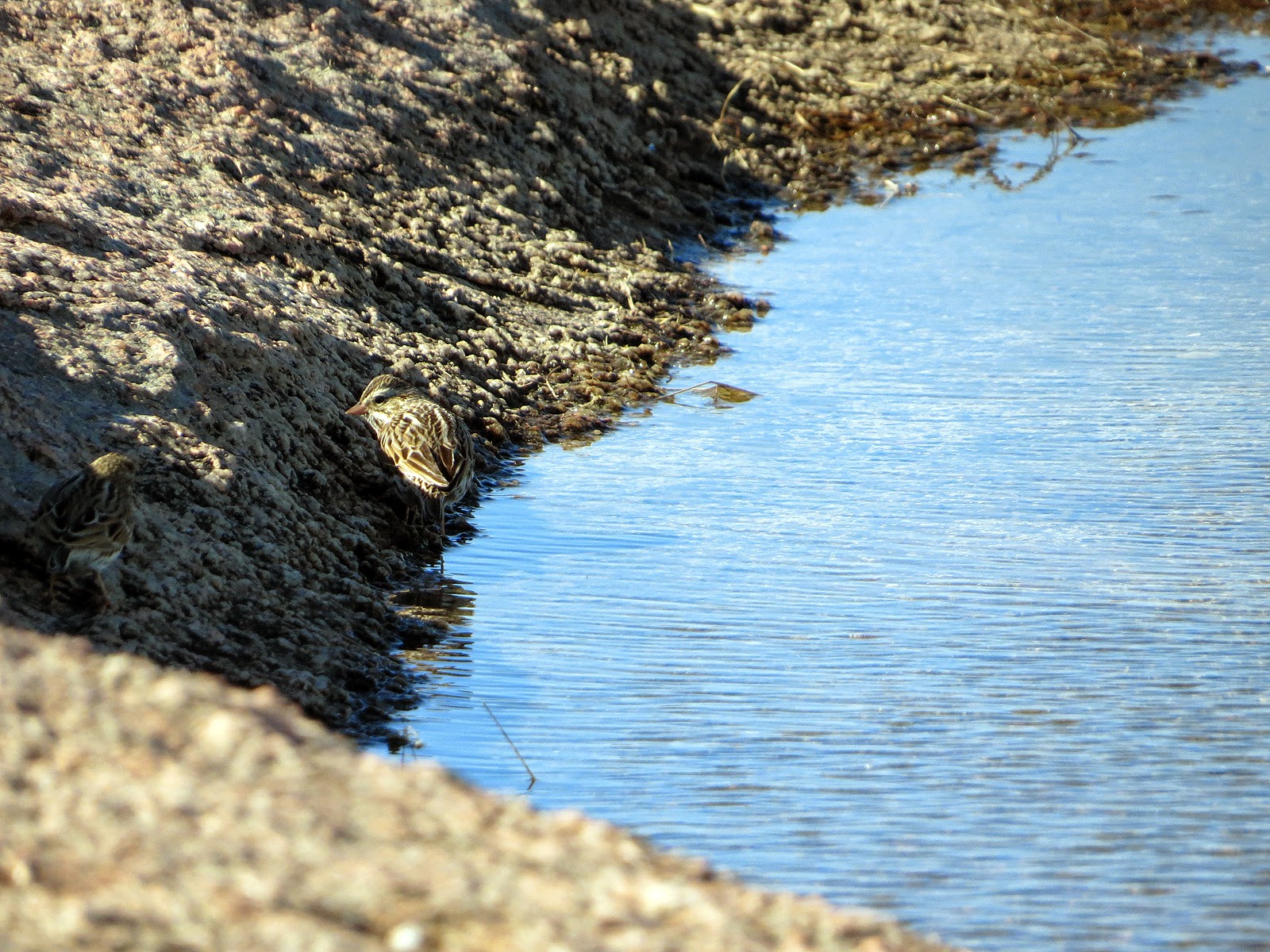 This habitat produces a unique version of fairy shrimp which attract birds,though on this day the smart ones stuck to walking since the moment they took to the air the wind blew them right off the rock! 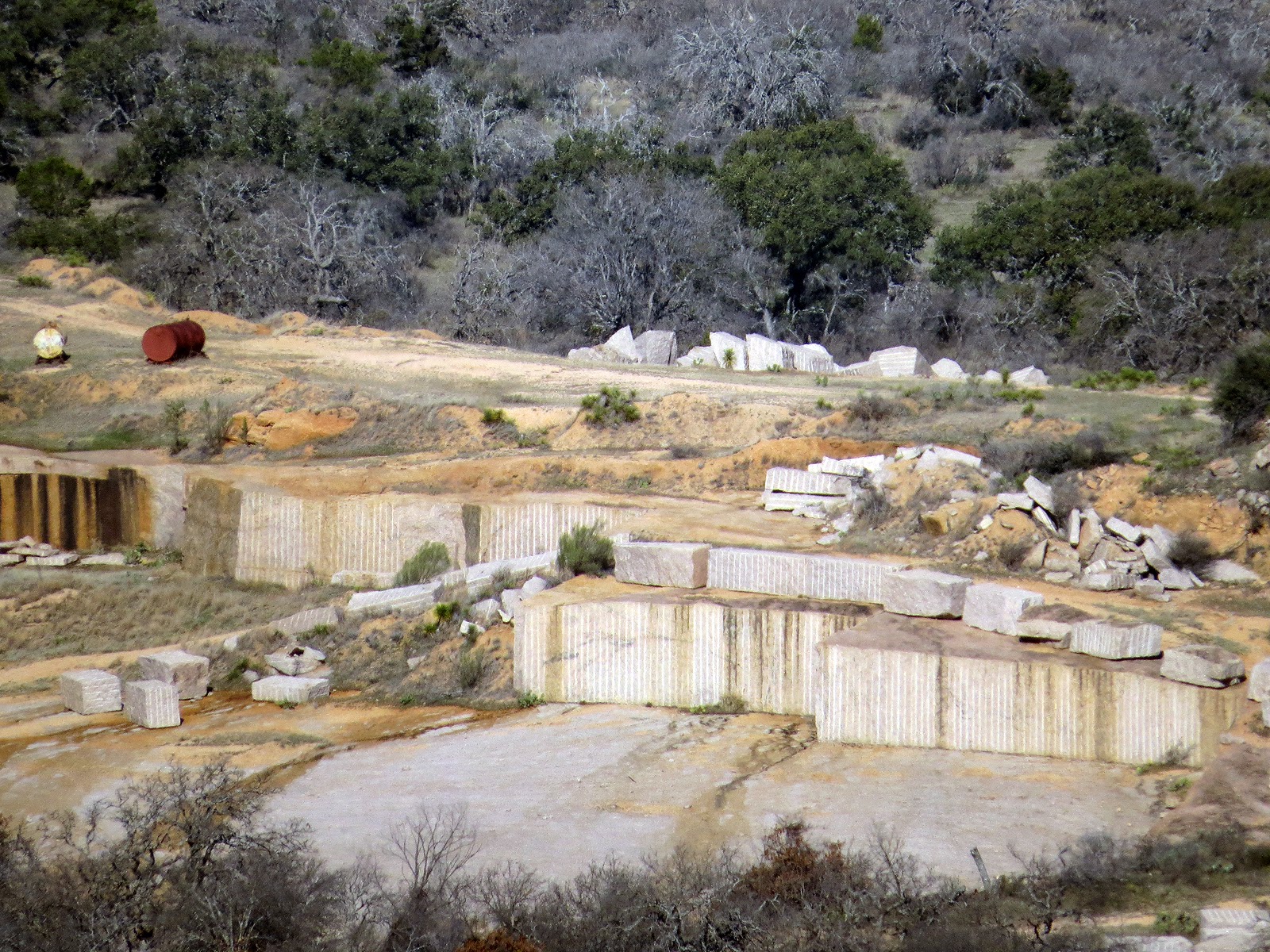 Ladybird Johnson was instrumental in saving Enchanted Rock from a quarrying interest when it came up for sale in the 70's. This quarry, well outside the boundaries of the park, was visible in the distance from the top of the rock. Since it looks like there isn't any heavy equipment hanging around I would say the quarry isn't active anymore, but to the right were rows of blocks already cut and just waiting to be drug out of there for the next big building project. 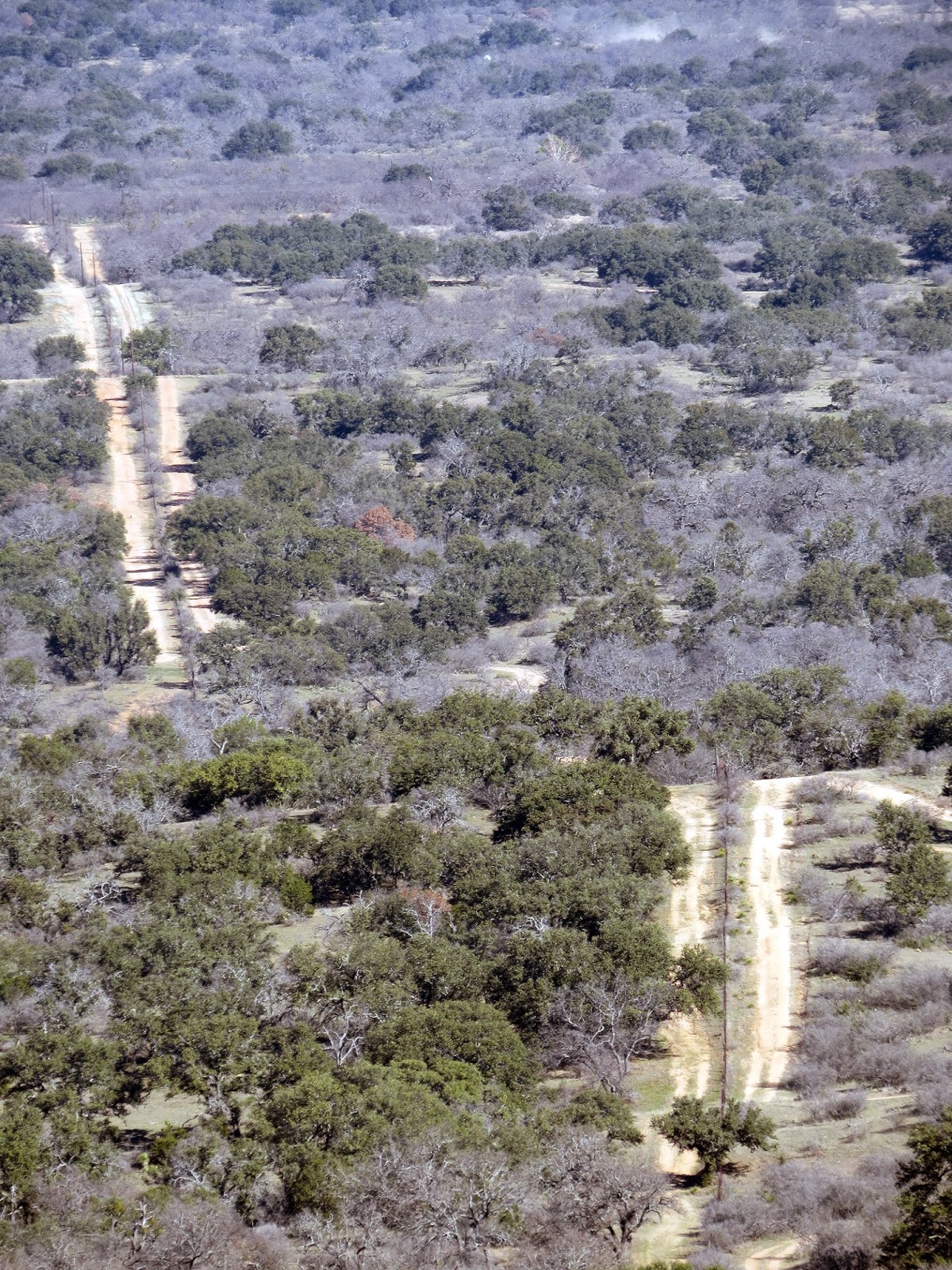 At first this might look like a two-track off in the distance, but it's actually a pair of well used access roads bounding off across the hills on either side of a boundary fence. 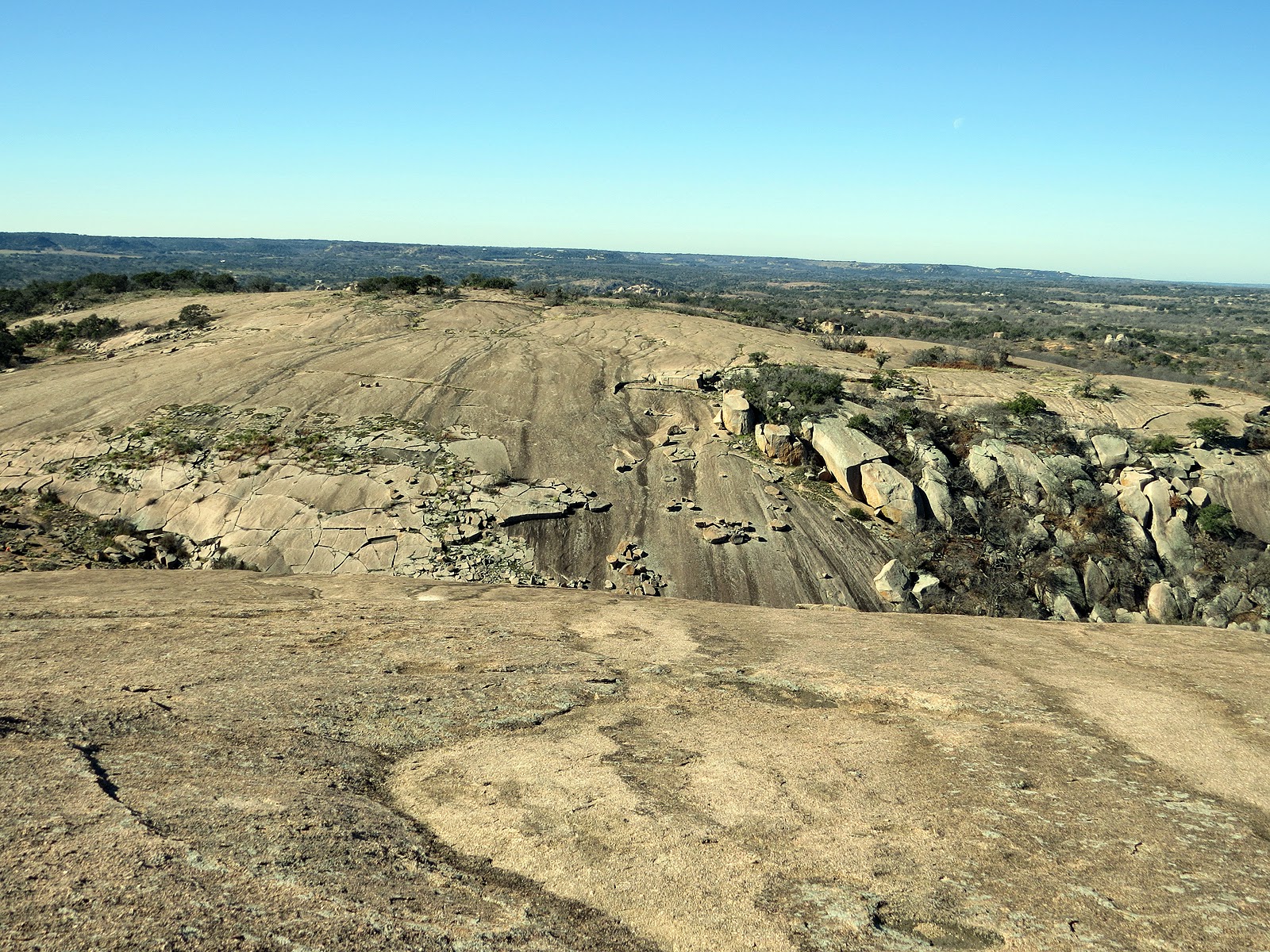 Enchanted Rock is one of 4 or 5 distinct peaks in a cluster and this is the slightly smaller Little Rock photographed from the top of Enchanted Rock with Echo Canyon in between. 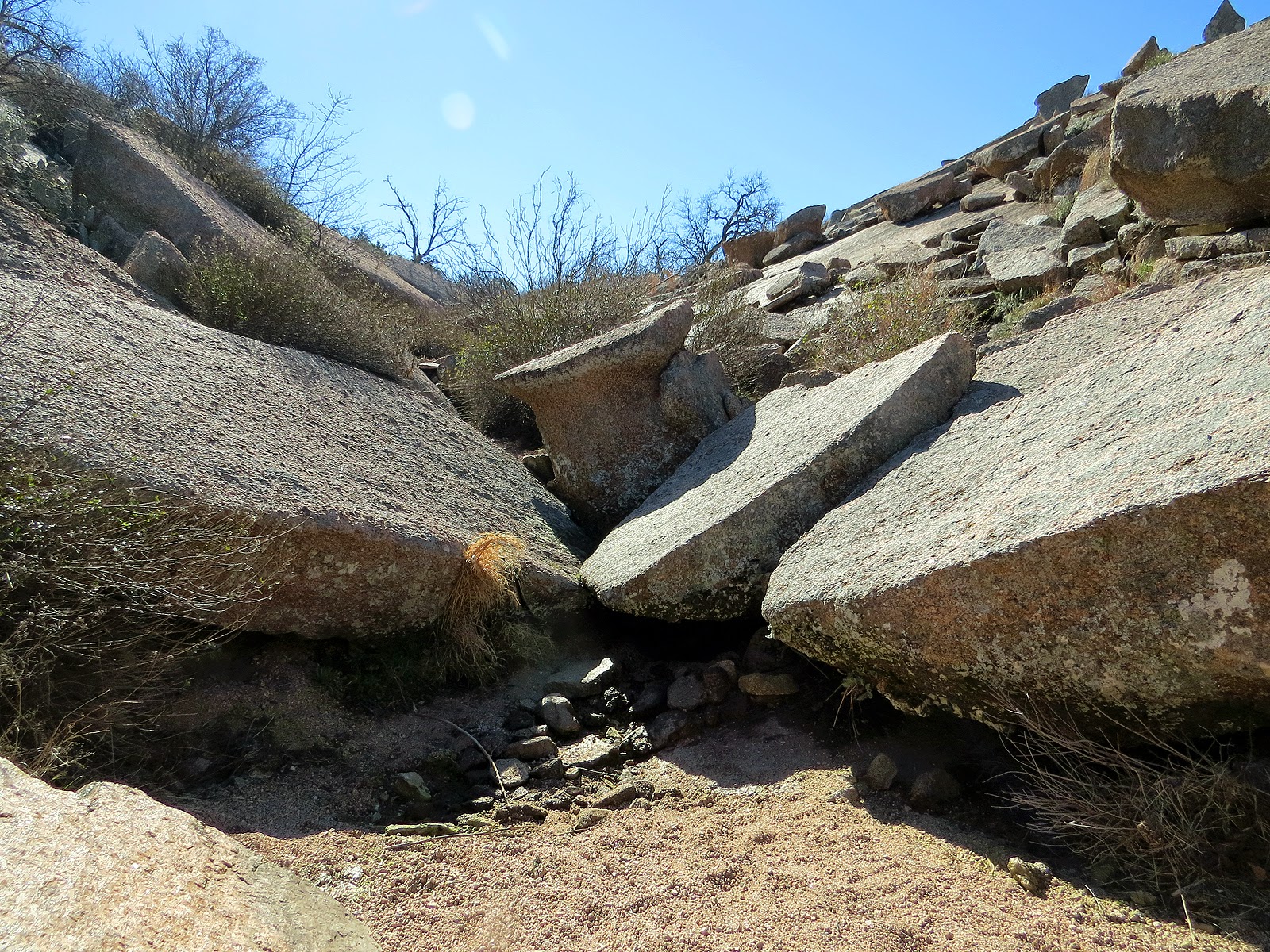 The 'trail' through Echo Canyon is more of a boulder scramble than trail, what with both peaks shedding their layers into the slot between them. 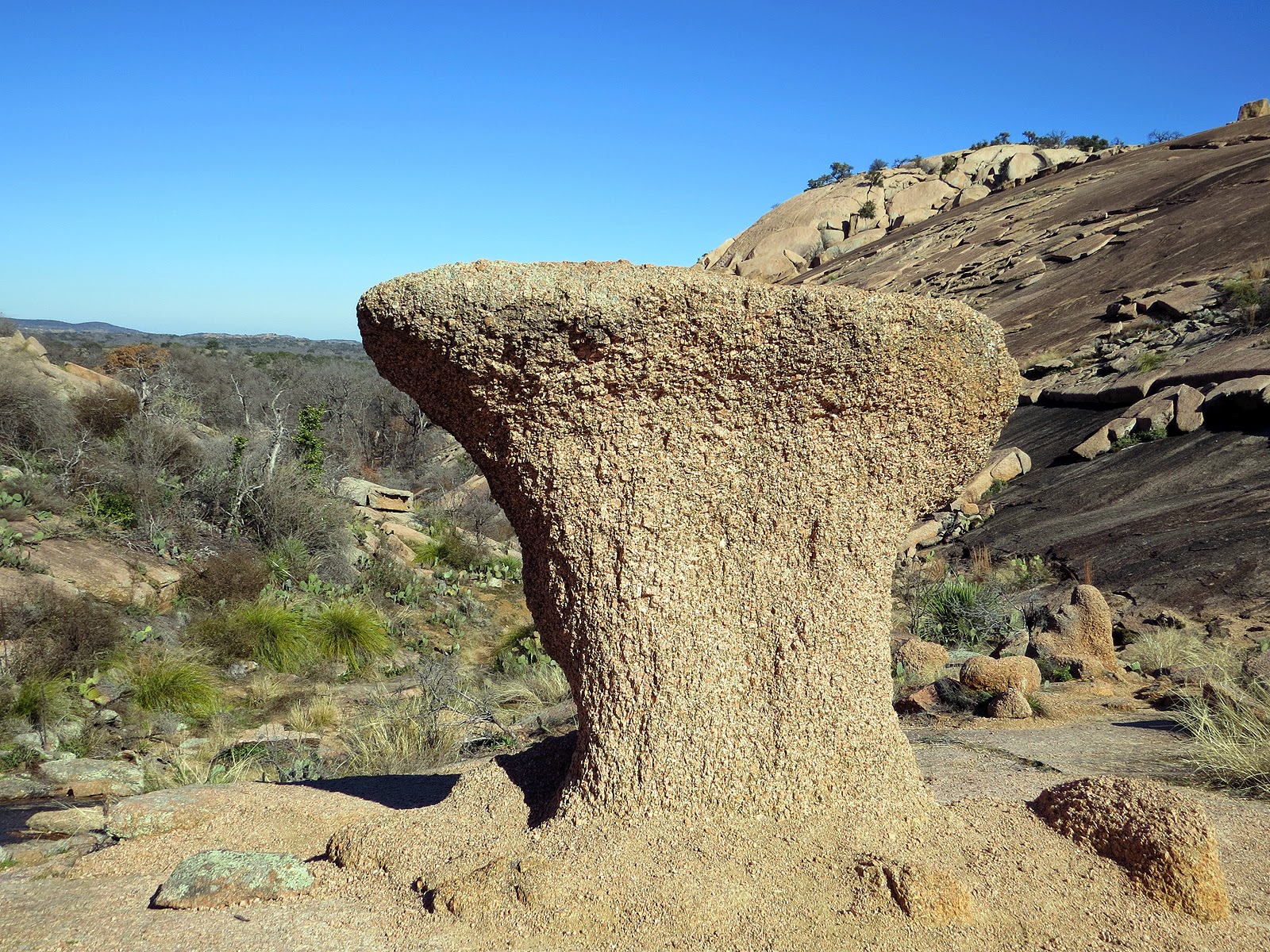 This is also where water tends to run which has formed a few of these hoodoo like formations. 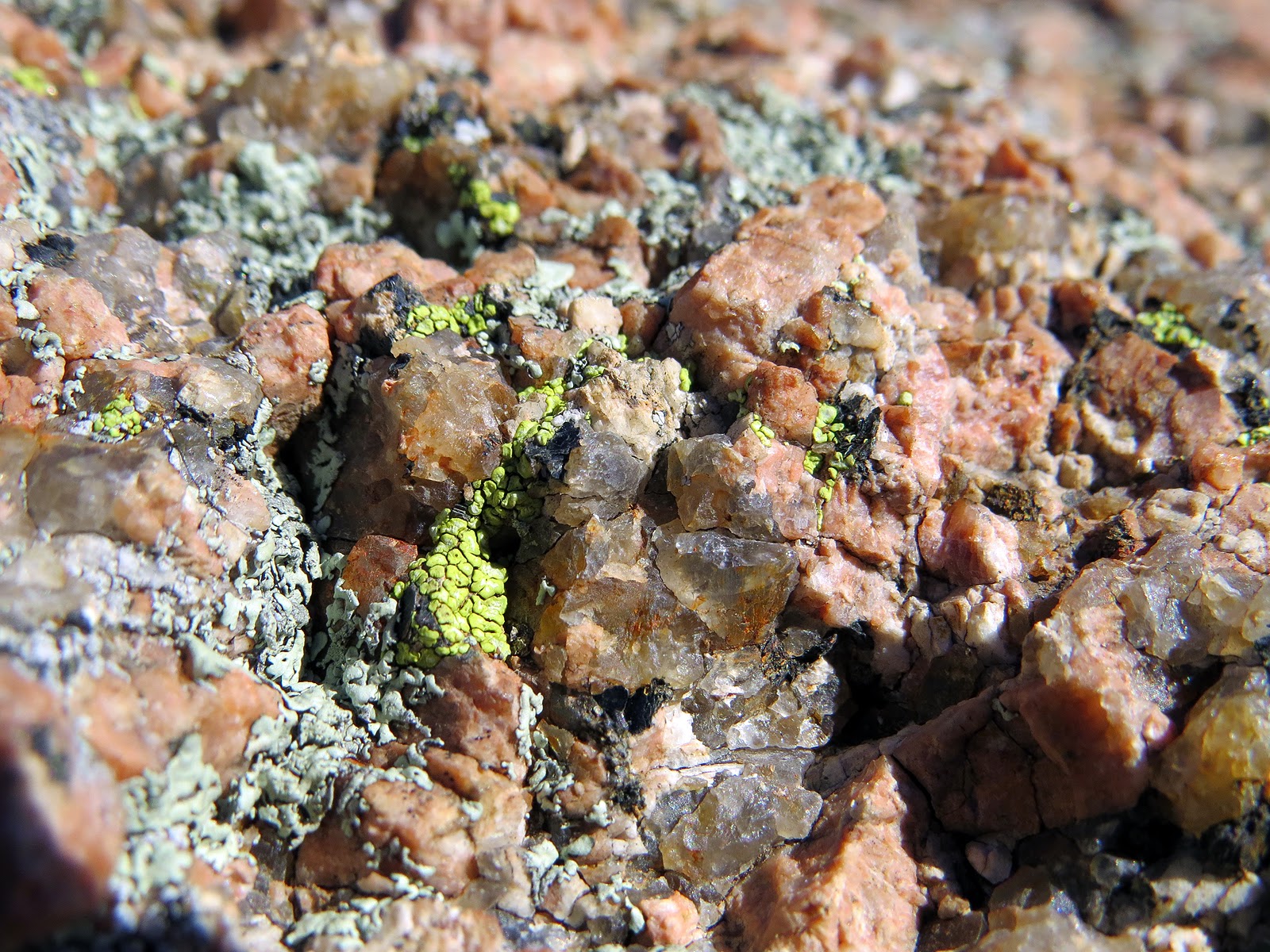 The coarse, seemingly sterile top of this particular hoodoo was supporting small clusters of  garishly green lichens along with the more common grey lichens. They might not look like much but a patch of lichens a few inches across could be as much as 500 years old! 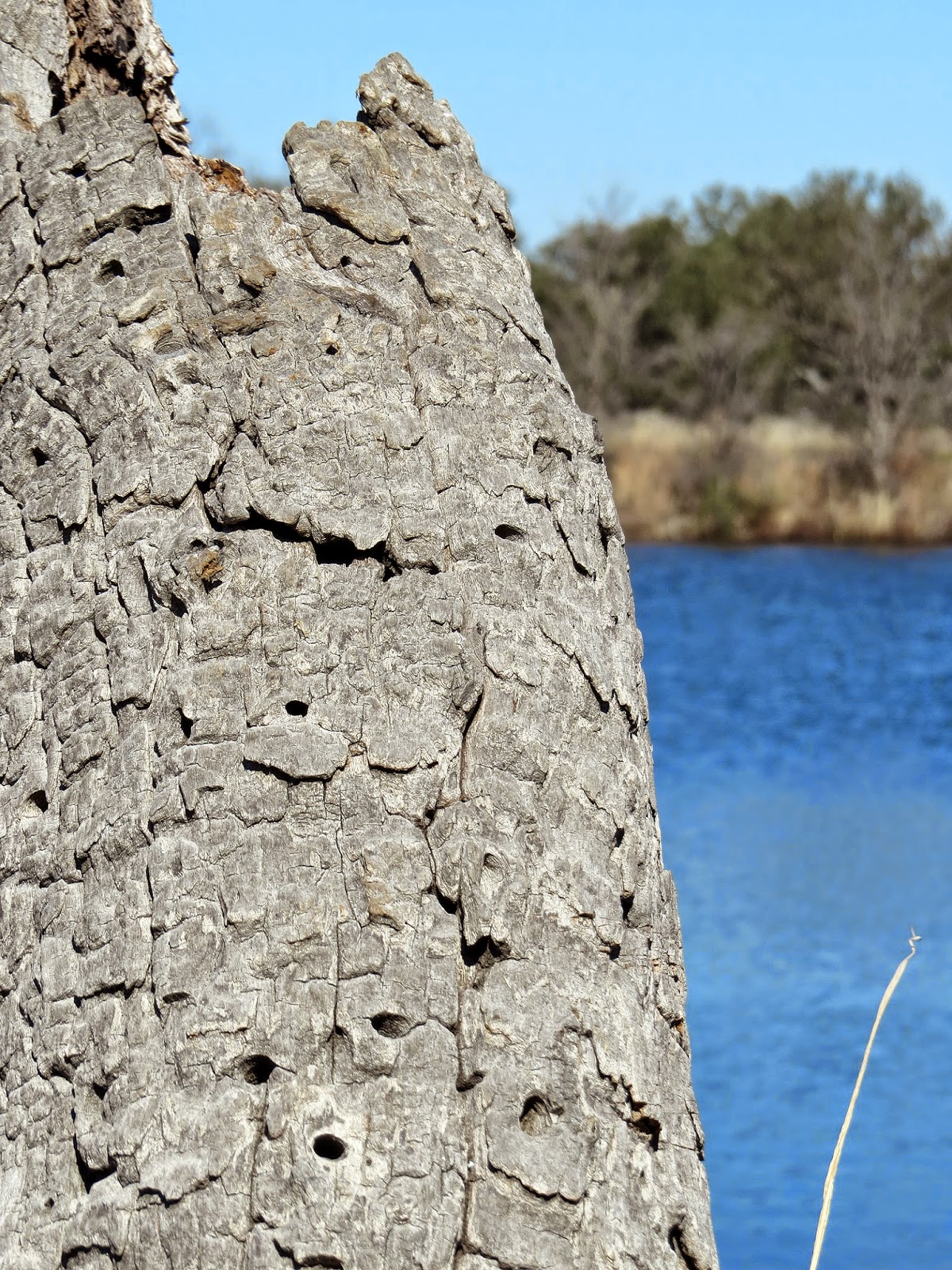 Enchanted rock isn't all about rock either. There are oak woodlands, mesquite prairie and floodplain habitats as well. With over a dozen miles of marked trails and plenty of off-trail opportunities, once I came down off the rock itself, I easily used up the day just wandering around the 1700 acre park.

And for those into that sort of thing, there are also nearly 50 named technical climbs within the park ranging from 5.5 to 5.11. If you don't know what that means my recommendation would be don't go climbing!! 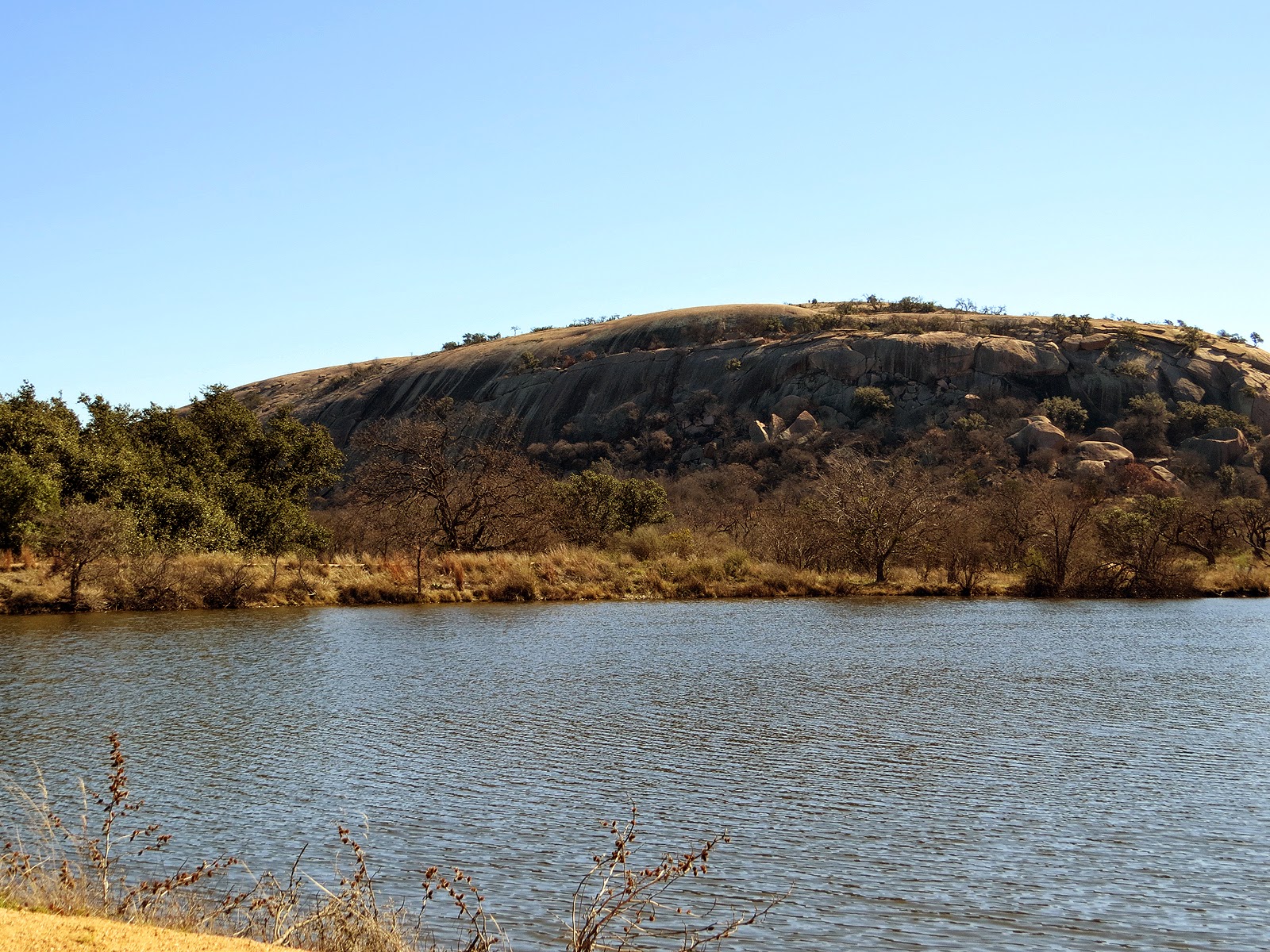