When convenience attacks!! (The isolator failed - and not in a good way. . .)

Don't you just love it when a plan comes together? Me too. I just wish I could get one to come together once in a while. . .

Yesterday the plan was to head over to a friend's place to do some design work on a proposal for a contemporary, open-plan, steel framed house, but that was before the washing machine blew up and I had to deal with that instead.

This morning - well -  that didn't go as planned either.

I went out to the van first thing because it looks like we have a stretch of good weather coming, (Is it just me or has this winter sucked!!? Weeks of cold, and grey, and damp. I might as well be living back in Michigan!) and I wanted to hook up a 2 amp charger to the chassis battery which has been acting weird, i.e. voltage dropping by one or two tenths every couple days even though I have a 5 watt solar panel hooked up to it as a maintainer.

While out there on this, the first real sunny day in several weeks, I happened to notice the house-system solar panel was producing 3 amps. Now this was a bit strange since the van has been sitting there with all the house loads disconnected since my last trip way back in early December so I would have expected the house batteries to be well charged and taking 1 amp or less, even first thing in the morning.

A quick check of the E-meter confirmed my expectation. The house batteries were taking 0.5 amps. So where were the other 2.5 amps going??  Oh well, I guess the gardening I planned on doing this fine day will have to wait.

I checked to make sure I hadn't left anything on since - well - that can happen. . . But nope, nothing on.  Just to make sure, I hit the disconnect to positively kill all 12V power, but there was still 3 or so stray amps being sucked out of the solar and going somewhere.

For the past couple months I've been suspicious of the behavior of the isolator that keeps the house and chassis batteries separated unless the engine is running so that's the next thing I thought of. I dug around inside the driver's seat pedestal and pulled the 10 amp fuse so the isolator couldn't do anything but isolate, no connecting of anything with that fuse pulled. (At least that's what the manual says. . .) Except that while fishing around in there, very carefully since there's lots of 12V crap just waiting to reach out and grab me, I was surprised to feel a significant amount of heat coming from the isolator.

By significant I don't mean it was blazing hot or anything, but it was certainly warm when it shouldn't be warm, and that can't be good!

Donning leather gloves and taping up my tools, I very carefully disconnected and removed said suspicious isolator. I had been planning on doing this anyway, just not today. . .


Well look at that!!  With the isolator out the solar panel is behaving just the way it's supposed to! A half amp at 14V out of the panel and that same half amp into the house batteries.

Seems the isolator, which is supposed to provide the convenience of automatically looking after things for me, got bored with the same-ol' same-ol' and wandered off to try something different for a while with no thought at all about the consequences. It lawyer-ed up and wasn't talking, no signed confession today, so I don't know exactly what it was doing with those three amps, but I figure it can't have been good!

Since I already had everything opened up anyway, I went ahead and installed the alternative I'd been planning on putting in for some time now. A manual disconnect switch. Simple, reliable and cheap.

I drilled a few holes for mounting the new switch, 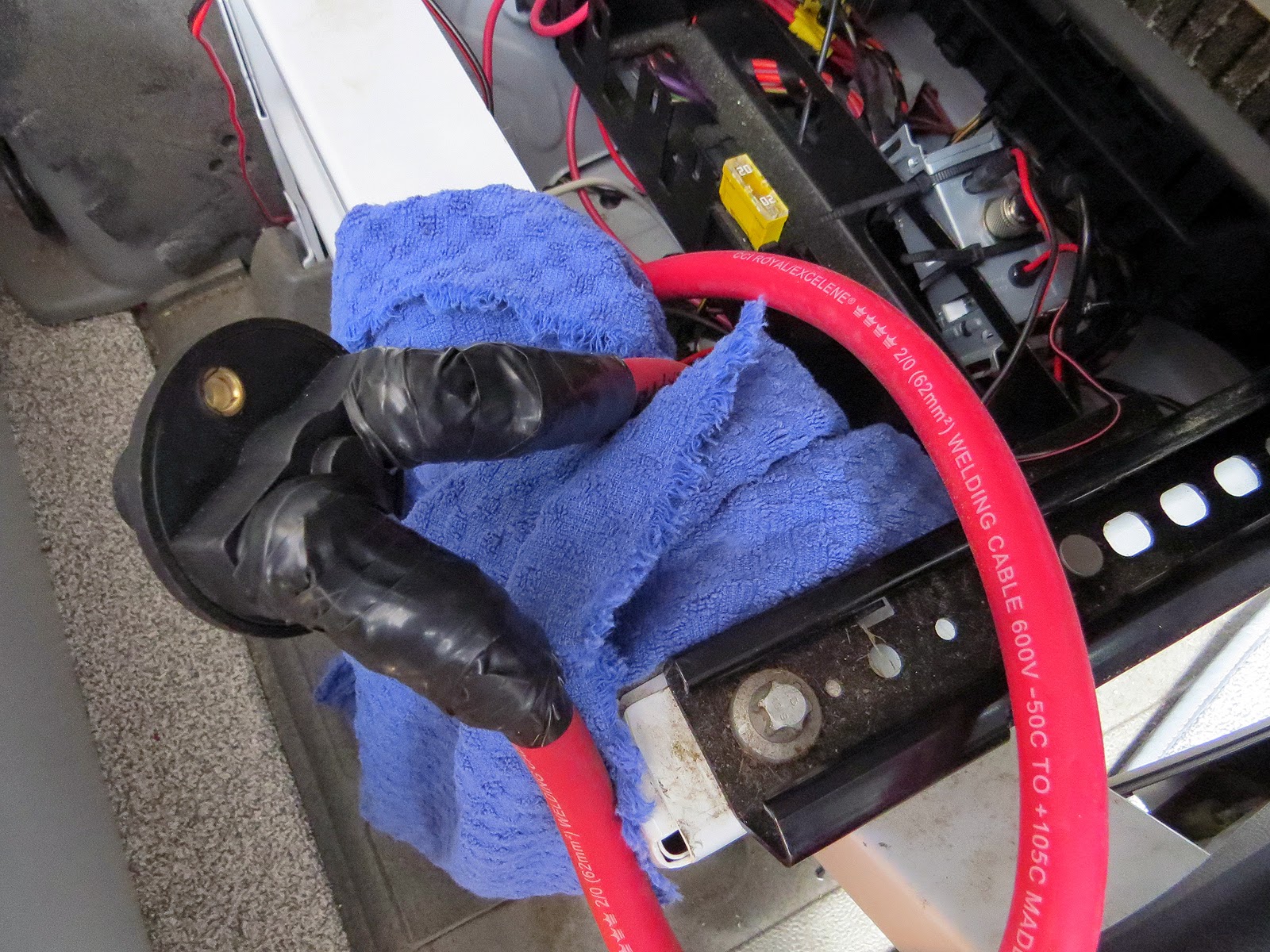 connected up the cables and taped the crap out of them, 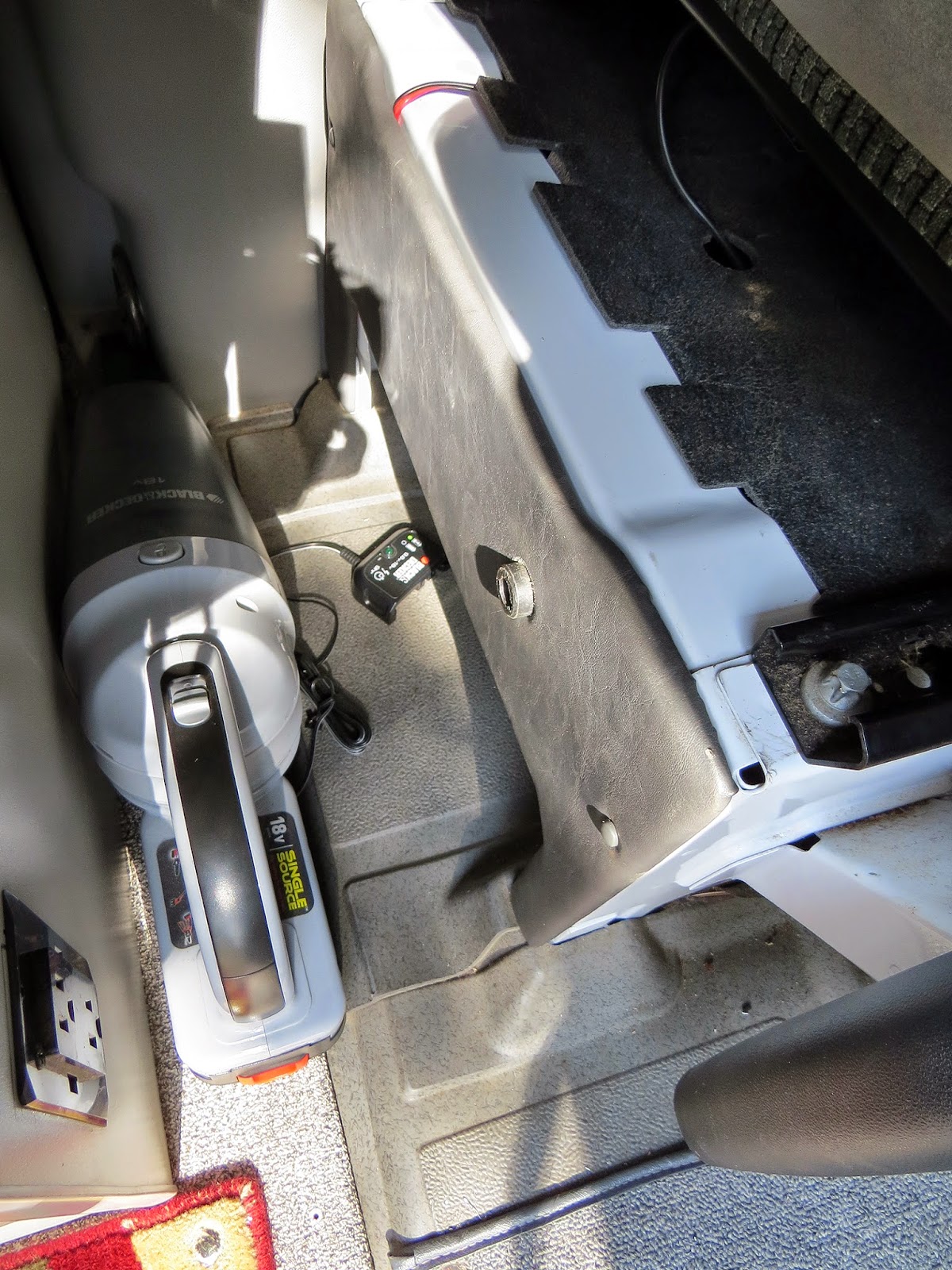 then mounted the switch, and buttoned everything back up again. The visible part of the switch is that short black, pipe looking thing right in the center of the photo. 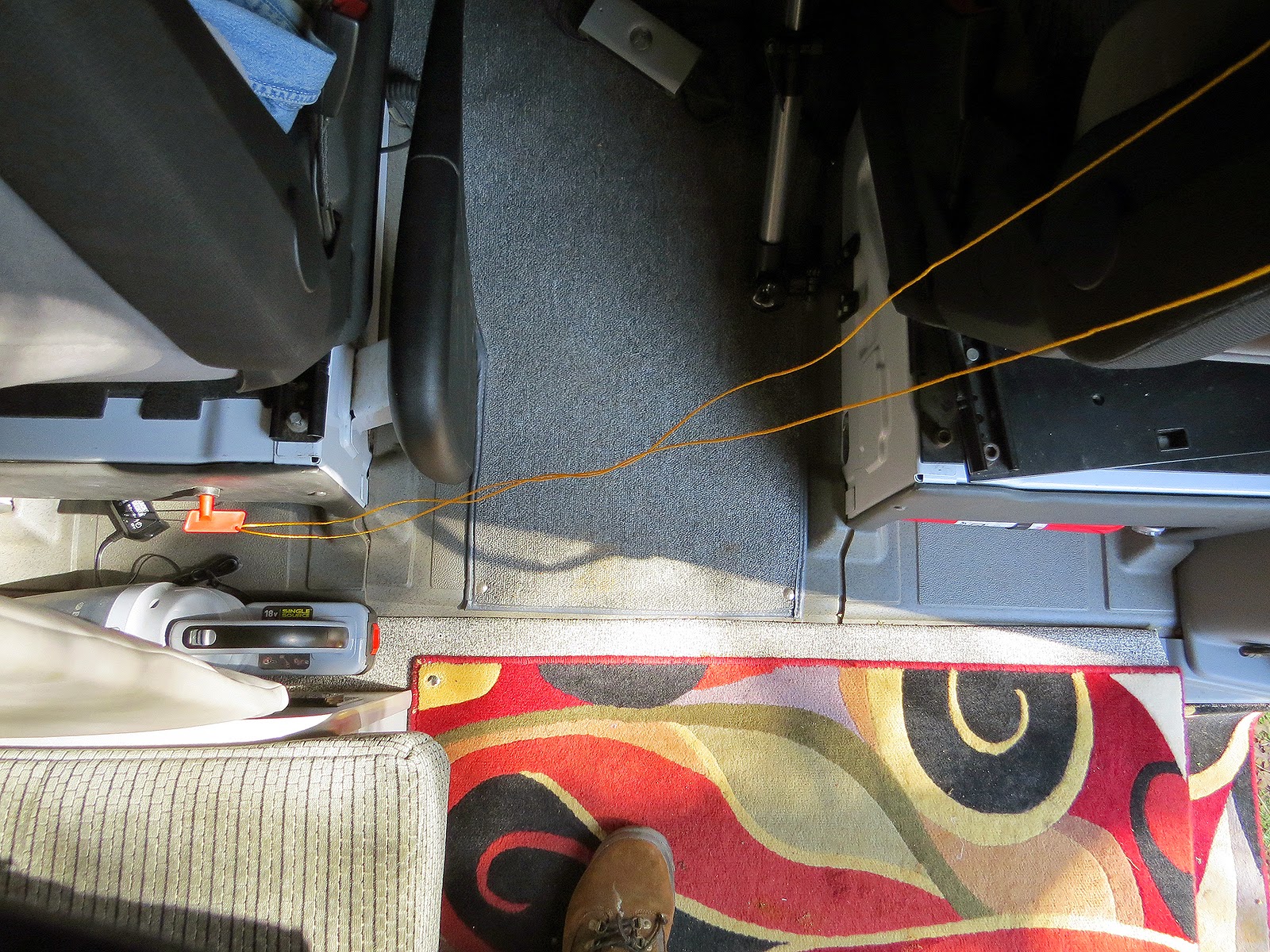 The switch itself is dead simple. (Hence the low price!) Basically it's just a big,  momentary push-button switch you can find at any decent auto parts. So that you don't have to stand there and hold the button yourself, it comes with a red plastic key (Two actually, in case those that tend to lose things were worried.) that you push in and twist a quarter turn to lock it.

Of course the thing about manual is that you've got to remember to do - well - the manual part. And frankly I don't see my memory getting any better as time goes by, so to reduce the likelihood of  connected the two battery systems together then getting distracted and wandering away like I know what I'm doing, I simply put an absurdly long loop of brightly colored twine through the hole conveniently provided in the key.When the key is in the switch I can drape the string across the couch where I can't miss it, or even better, hook it over the armrest of the passenger seat where I'll trip over the dang thing!

Now all I need to do is make sure that chassis battery has a good charge in it so I'm ready to head out into a great looking forecast as soon as the weekend crowds dissipate into the work-a-day week. (Damn I like being retired!!)