How to jump-start your heart with nary a defibrillator in sight.


There I was, ambling along just minding my own business, almost at a juncture in the trail and pondering which way I wanted to go next, when a jet black feral hog stepped out onto the trail with me. And I mean stepped out up close and personal!

My first thought was ‘Uh oh, this could be bad!’. My first reaction was to go for the camera. (I know, I know, from a self-preservation standpoint there’s something just wrong about that!) 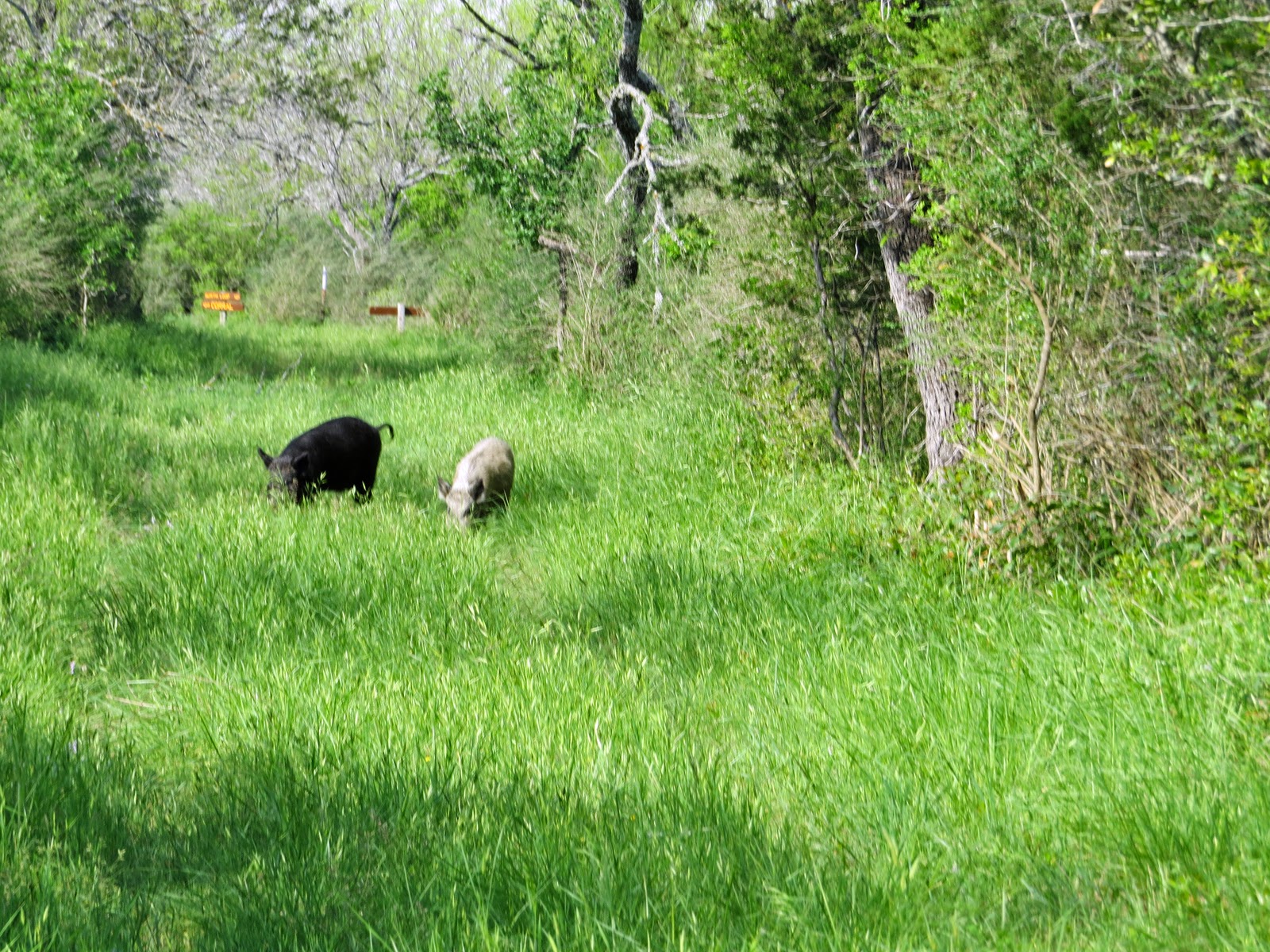 By the time I got the camera fired up and ready, held at waist level to minimize any movement on my part, another hog had joined the party; or was this an ambush?! Because if this was a party I never got an invitation! If I had I’m pretty sure I would have hung out way over there across the street with the other looky-loos instead of walking right through the front door like this! Open bar or not!

I was way up in the northwest corner of Pedernales Falls SP. An under-used corner of the park where the trails don’t even show on the map. (There’s a rumor that the new, more complete, maps will be out in October, but that same rumor has been floating around for several October’s now.) The winter has been especially kind and this spring everything is lush and the walking is quiet; clearly too quiet!

Following right along with the cornucopic nature of this day, first I’m blessed with the one hog, then a second joins the party, and to top it all off with yesterday’s half rotted cherry, the two of them start wandering up the trail right at me! Oh great! My cup just doth runneth all over my ass today!

I felt like I was waiting my turn at the deli counter, getting jostled and elbowed by the phone-yammering, tennis-skirted privileged. Clearly I must be invisible! (I knew that Mossy-Oak backpack was a bad idea!) Instead of a howdy-do or even a disdainful sneer, they (The hogs, though it could just as well have been the privileged since they do the same thing.) put their noses down and got busy doing piggy things as if I wasn’t even a gleam in Dad’s eye yet.  Poking and rooting and snuffling and occasionally snapping up some morsel, then moving on a couple steps and repeating.  And it’s painfully apparent that I have the good fortune to be standing right in the most desirable snuffling patch, because they just keep on coming!

Now there are lots of advantages to hiking alone. Coordinating schedules with my hiking partner is super easy. The only I told you so’s I have to listen to if I pick the wrong fork in the trail are my own. If I scare the bejeesus out of myself or just get tired, there’s no one there to judge when I turn around and tuck tail. The only intrusive and overly loud conversations breaking the peace of the trail trail are the voices in my own head, and after years of practice I’m pretty good at ignoring them. But one distinct disadvantage is there’s never anyone else there that I can outrun. (I don’t have to outrun the bear I only have to outrun you!) 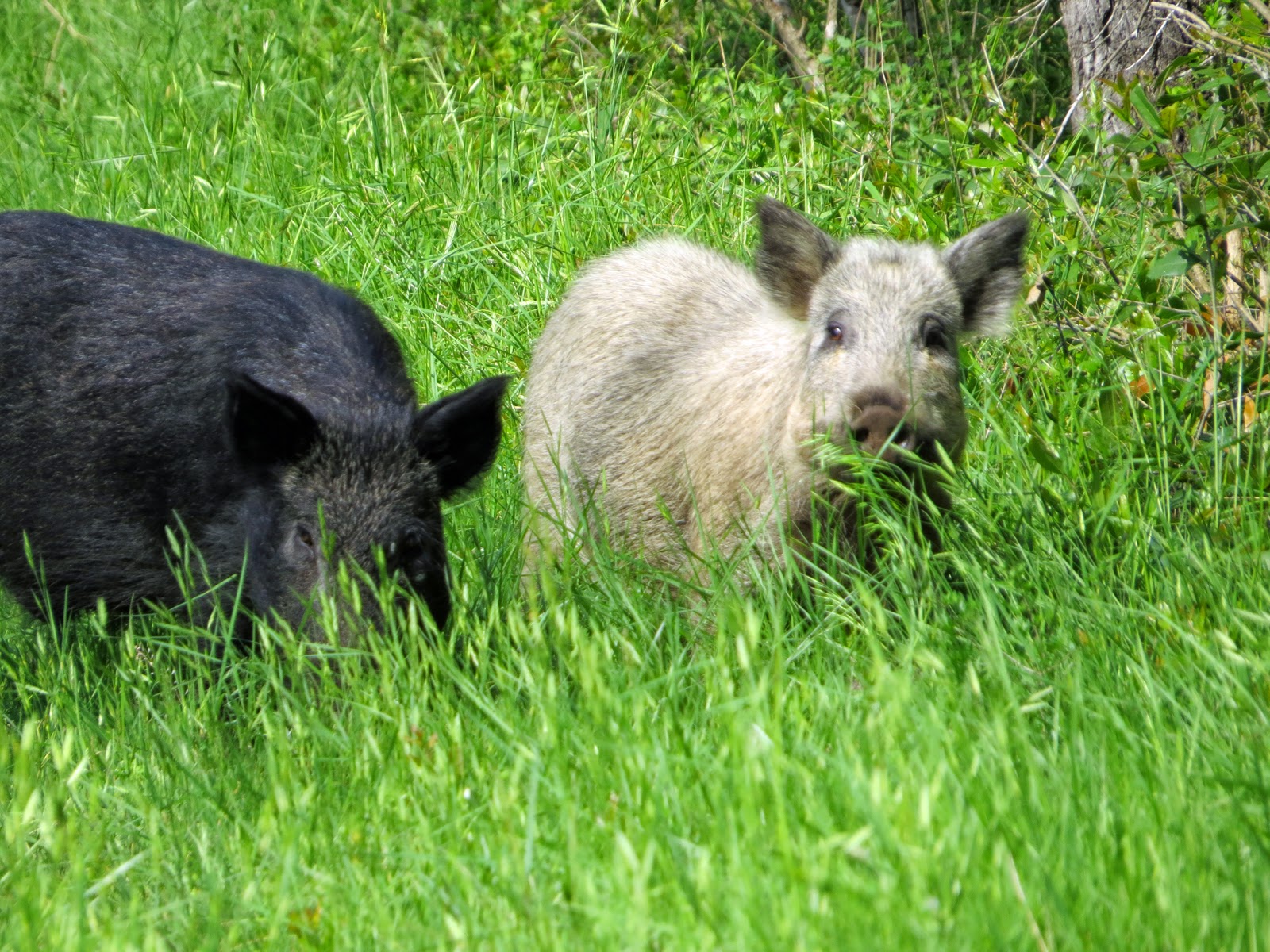 But in the meantime – these hogs are getting pretty damn close! Close enough to smell now! Admittedly they are odoriferous little creatures (Of course they think the same of me I’m sure.) so their olfactory reach is significant, but that’s still close enough! Any closer and I’m going to be able to tap them on the nose with my hiking stick; and I’m pretty sure that would be a bad idea!

So I’m just working up to getting medieval on their asses and letting out the loudest, scariest roar they’ve ever heard. One that will shock them right out of their little pig-skin booties, (Assuming I could; roar that is. I once came in close proximity to a grizzly and my vocal cords clamped up so tight I couldn’t even manage a squeak.) but that’s about when the grey one finally lifts his head from the dinner table for a moment and lays his beady little eyes on me. (Reminds me of some people I’ve supped with.)

Contrary to what my wife keeps insisting, apparently I’m not all that easy on the eyes because in a flash the two of them shot off into the brush, tails high, squealing for mercy; or was it reinforcements?