This is an honest-to-God real and official event that I knew nothing about until I had to go begging for a campsite during a recent excursion to Pedernales Falls SP that was interrupted by no room at the inn over the weekend. And now I know why.

It used to be that only a portion of campsites at Texas State Parks were reservable, the rest being first come-first camp. But somewhere along the line that policy changed and now all campsites, every last one of them, are reservable; and apparently I wasn't copied on that memo. . .

On the one hand I think this policy stinks. We're already regimented into marching from one scheduled event to the next by - well, pretty much everything else in our lives, and now we have to book our leisure and recreation months in advance?!

On the other hand; what with the city-living hoards of the over stressed and under medicated, all with too few recreation slots in their schedules, and many of them driving multi-ton weapons of mass destruction masquerading as RV's like they're contestants in a demolition derby, all in a desperate attempt to snag that last campsite, I can see where the potential for ending up a national news story might encourage the parks department to adopt this all-inclusive reservation policy. 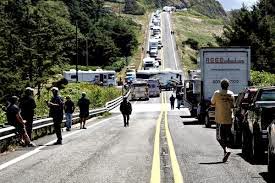 This just in; Riot in the Campground!

Friday evening an estimated two and a half gaggles of overweight men along with their adoring, and surprisingly ferocious, wives, 2.3 screaming children and 1.25 barking dogs descended on the campground with their 40' RV's. The issue quickly got out of hand when they all attempted to fit into a mere gaggle's worth of campsites. It took park rangers, along with law enforcement support from surrounding communities, including one helicopter, two paddy wagons and a partridge in a pear tree, over 6 hours to quell the ensuing altercations and restore order!

At any rate - completely unaware of the new policy, I turned up at the state park on a Sunday afternoon while the recreating hordes were heading in the opposite direction, secure in the belief that I was high on the first come-first camp list and would have no issues staying through the following weekend.

I had a site for the week, in fact my favorite one, site 5, but because I wasn't forward-thinking enough, I was going to be kicked out for Friday and Saturday nights. I let the ranger at the desk put me on a wait list but didn't hold out much hope since it was spring in the Hill Country, prime recreating time. I resigned myself to spending those two nights in a largish parking lot some 20 miles away where there's one big store, a gas station, a fast-food establishment with a 24 hour drive-through, and a nearby nightclub. I can usually get away with that because I don't look like an RV, I arrive late (The day-use areas of the park don't close until 10PM) and leave early. 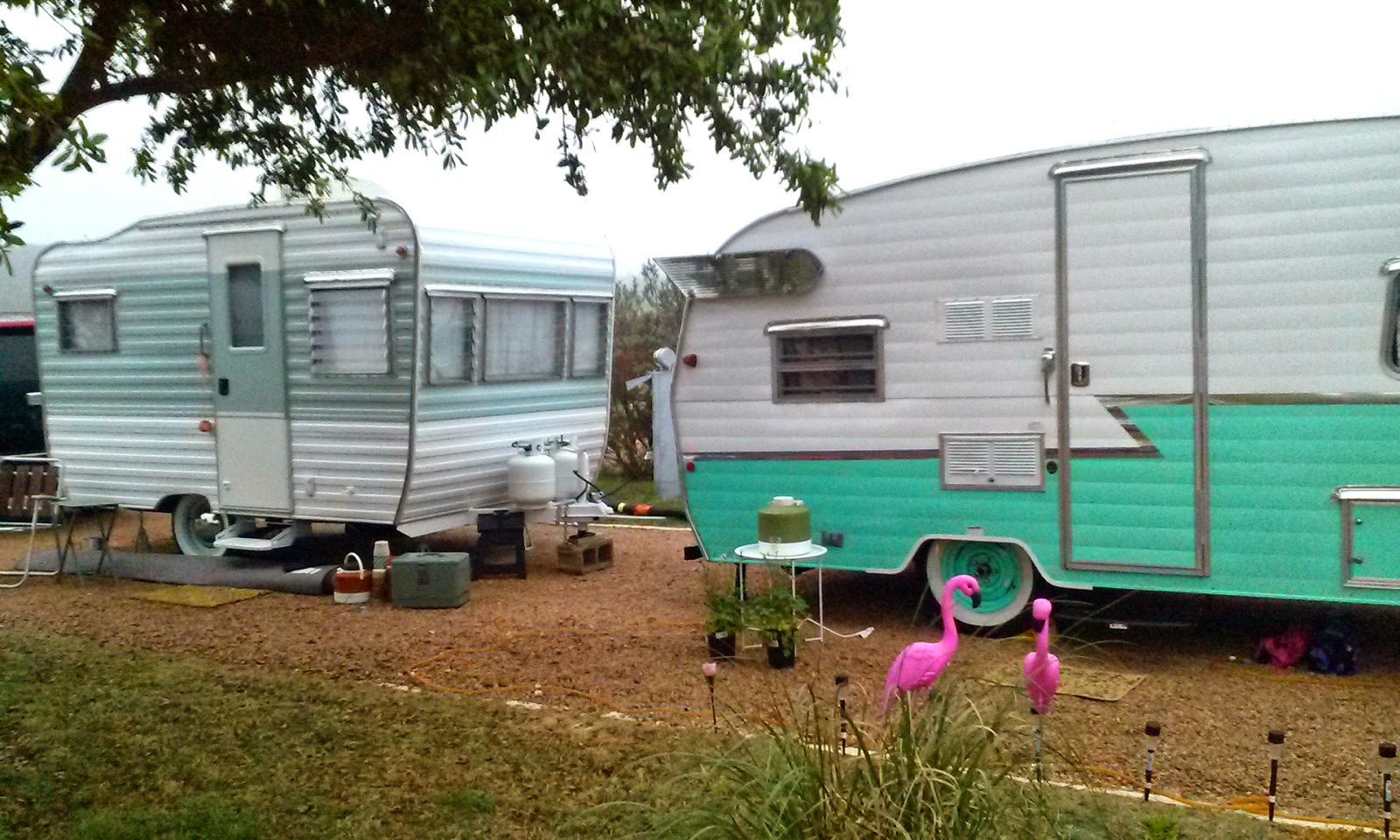 But sometime during the week I decided to try a hail-mary at a private campground I was passing on my way to check out another state park. (Also fully booked for the weekend.) It has been my observation that when many private campgrounds were laid out the architects were a little overly optimistic on just how many sites could be fit into the space and there's often one or two official sites that can only accommodate the smallest of rigs. Since I fall into that category I've sometimes been able to come up with a serviceable spot to park when all hope seems lost. And this case was no different. 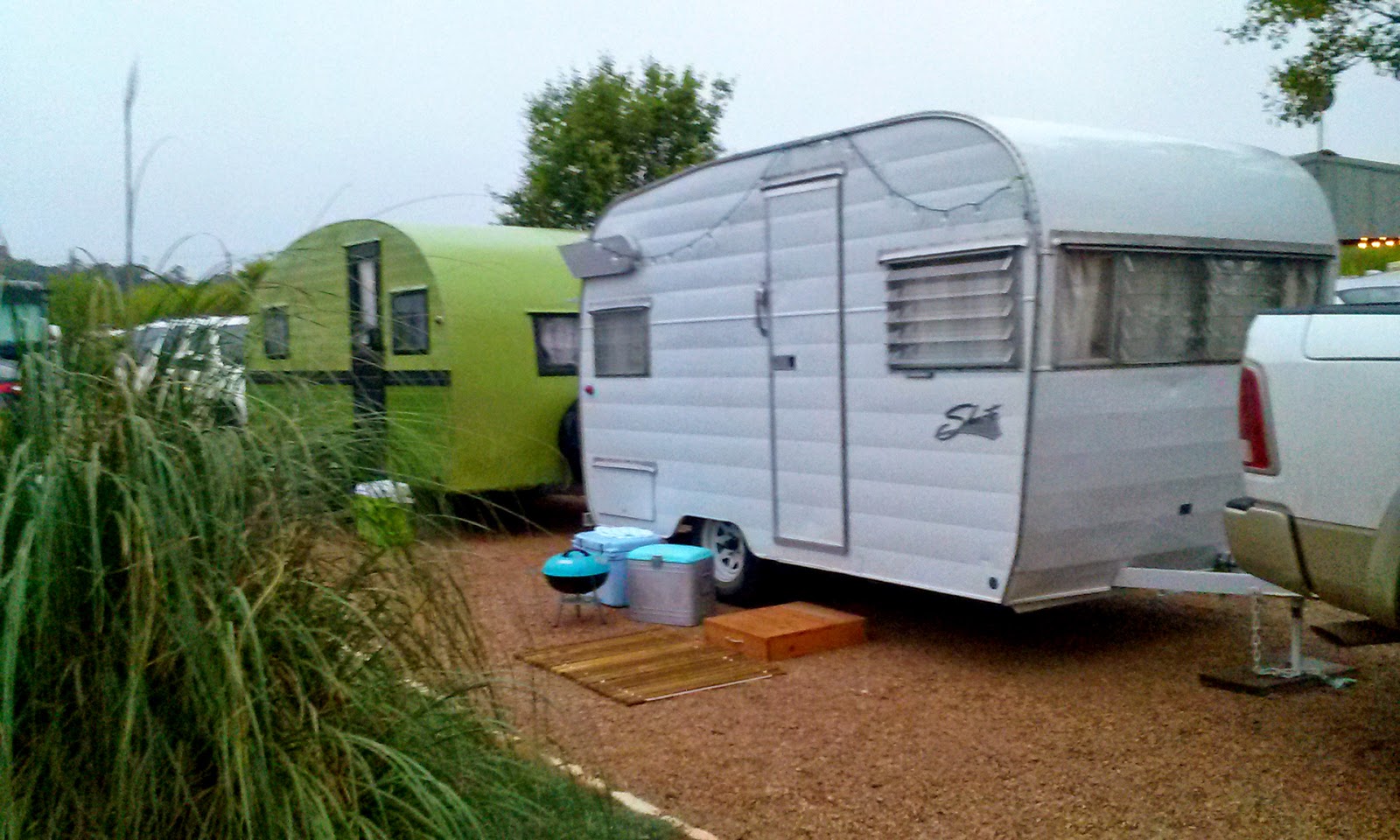 It was while I was completing the paperwork for my new weekend refuge that I found out about the Wild Women Weekend coming up. Actually the person in the office was warning me about it since there was a breakfast and a couple receptions scheduled for their reception hall and apparently last year the women lived up to the wild part of the weekend. 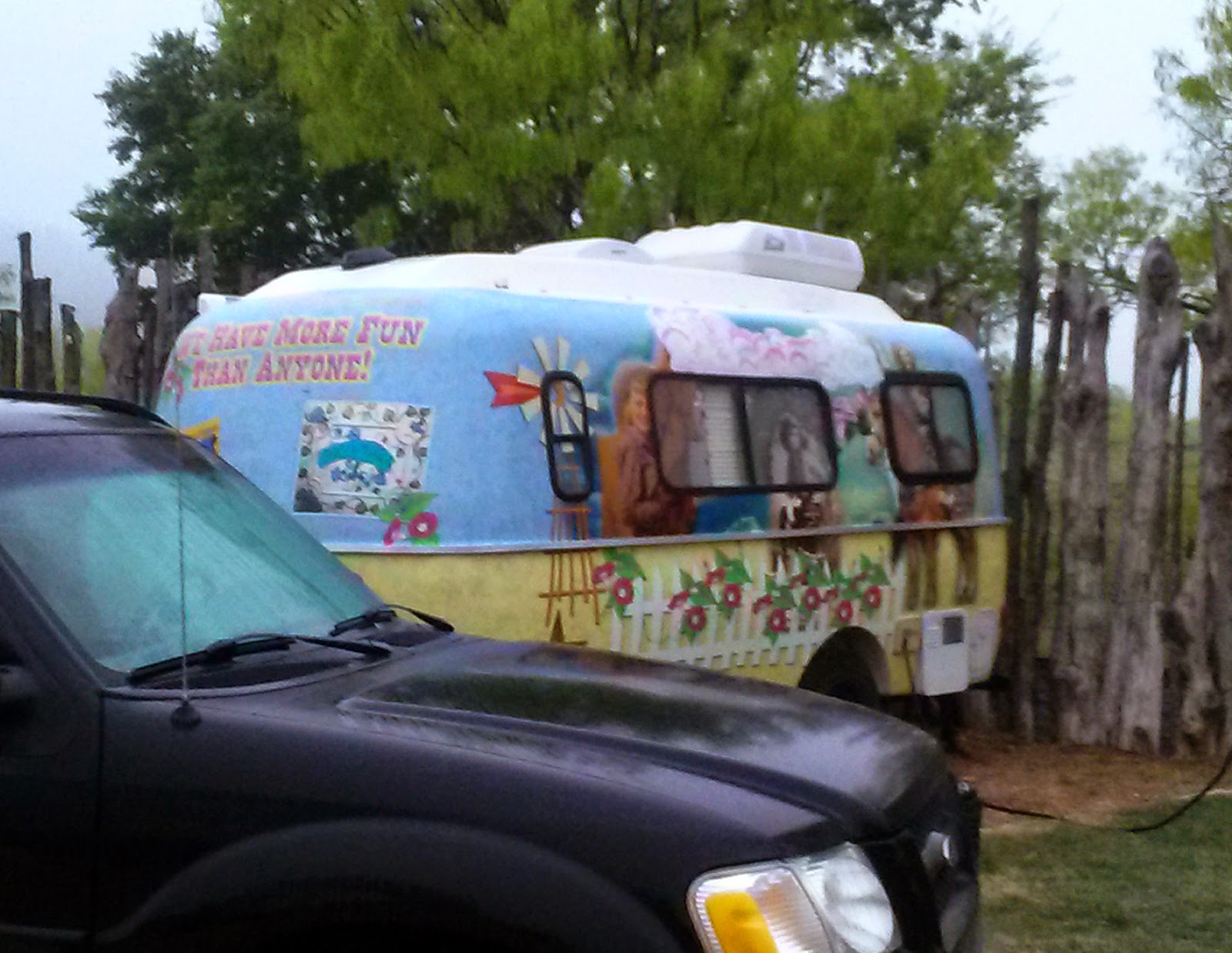 Most of the scheduled events were taking place down the road in the town of Blanco and the Blanco State Park, but there was plenty of spill over at the private campground in the form of campers. I"m not sure if it is a direct connection between the Wild Woman Weekend and a group called Sisters on the Fly, but when I got there Friday evening to claim my campsite the campground was full of them; the flying sisters.

Apparently, though it's not a requirement, a large number of the sisters own, renovate and decorate classic travel trailers, and because they're small (The trailers that is.) they were doubled up in many of the full size pull-through sites.

The only time I was in the campground when there was any light at all was early morning before I left for the day, and for some reason the only camera I had with my when I walked around was my phone, so these photos leave a lot to be desired but will give a hint of what I saw at least. 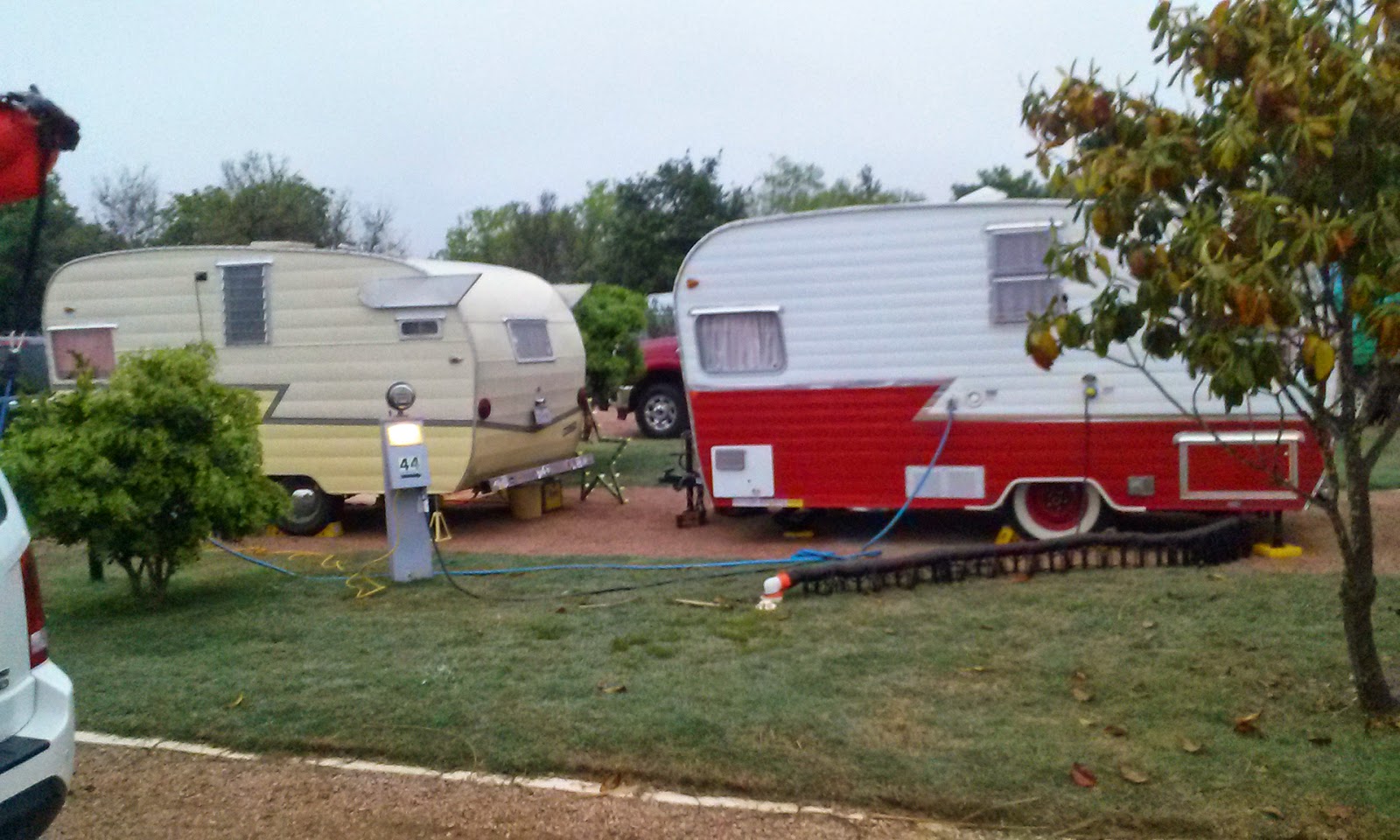 As for the wildness? I can't really say. I avoided Blanco all weekend because crowds are just not my thing (Yeah, that's why! It had nothing to do with being intimidated by all those women gathered together in one spot. . .) 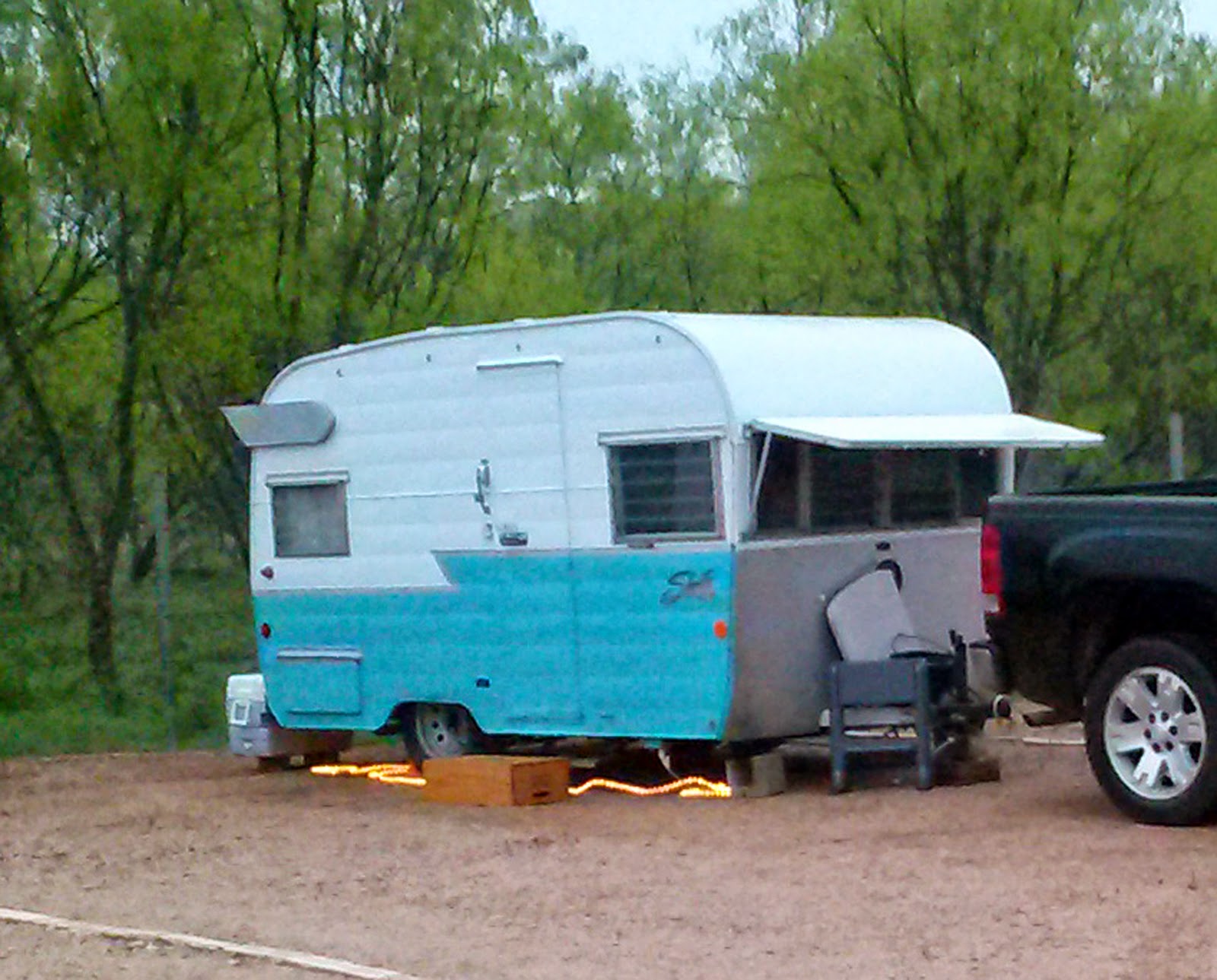 And if there was any rowdiness over at the campground reception hall it must have been contained within the walls because none of it spilled over my way. Just what was going on inside those walls I don't know. You see the Sisters on the Fly basically have one rule, and I quote 'No men, no pets, no kids and be kind'.

Since, by stretching things only slightly, I potentially strike out on all 4 of those points I would have never made it inside even if I tried, which I didn't. . .