I recently did a series of posts that included a few of the Texas State Parks. Steve, a fellow blogger, (And retiree!) commenting on my post about Blanco State Park , said that I was tempting him to make a slow trip through Texas.

That, and the fact that mine just expired, got me to thinking about the Texas State Parks Pass.

Most of the State Parks charge a daily entry fee. The fee is per person, not per vehicle, and if you are camping the entry fee is in addition to the site fee. This means that a water/electric campsite at Inks Lake (One of the more expensive parks in the system at $6 per person entry fee and $22 per night water/electric site fee.) costs a couple $34 a night, and if that couple has two children over the age of 13 then the cost jumps to $46 per night. (But then again, what teenager really wants to go camping with mom and dad??!)

Don't get me wrong, I still think a visit to the park is well worth it, but there is way to cut that cost down. One Texas State Parks Pass covers the daily entry fee for yourself and everybody else in the car. (Probably the only time 5 doors and three-row seating doesn't seem like a vain overindulgence!)  If you camp you also get four camping coupons worth half off the second night.(Hint, if you are a frequent camper don't waste those coupons on the inexpensive sites like Colorado Bend State Park. Save them for the more expensive parks.)

Doesn't matter if you are a resident or not, the Pass costs $70 and is good for one year from the time of purchase, (Actually it expires at the end of the month you purchased the pass so if you buy it early in the month you can squeeze 13 months out of it!) and can be purchased right there at most of the parks in the system.

Even as a solitary park-goer, it only took me 8 days  of enjoyment to recover the up-front cost of the Pass, (Including $20 worth of camping discounts.) after that the pass was paying me. I added an additional 29 days of park access and two more discounted nights of camping before my latest pass expired and by the time all was said and done, after subtracting the purchase price my April 2014 to April 2015 Pass netted me $186. That's a return of over 265%!! If I had been a couple instead of solitary, the numbers would have jumped to $400 and 571%! 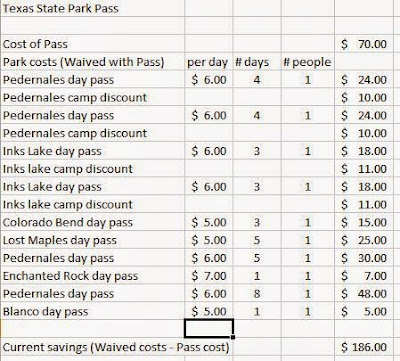 Hard to argue against those kinds of returns!
(And yes, though it's sad, I do actually maintain spreadsheets like this. . .)

As a direct benefactor of the parks system I have no objection to paying for services and facilities as I go, therefor reducing the tax burden on those residents that don't use the park system, but at the same time I'm not stupid, (Most the time anyway.) if a discount or break is offered I'm going to take it! (I don't agree with Obama Care but you can bet your - - - tush - - - that, come time to file my taxes for 2015, I will be taking the government subsidy!!!)