And Now for Something Completely Different:

The whole reason for this midsummer night's dream trip, (Sorry, for some reason I felt it necessary to pack both a Monty Python and a Shakespeare reference into adjacent statements there.) that's been the source of subject for the past few blog entries, was ultimately another one of our family gatherings.

This time we were all going to spend a weekend together at a lodge. (Can I get a sarcastic 'Oh yea!!'  Oh come on, you all thought the same thing, don't deny it!) 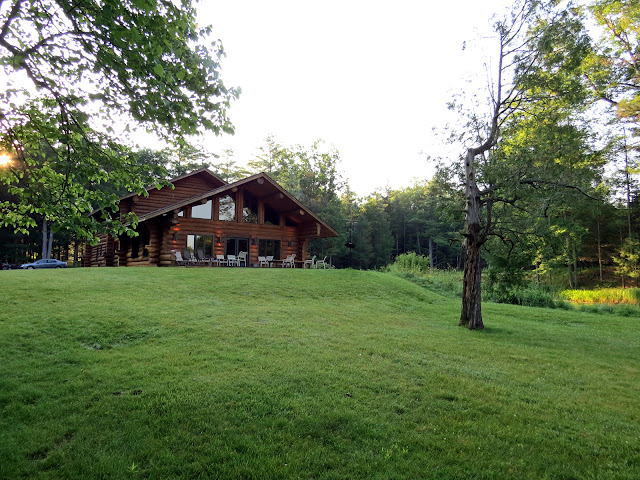 Now lodge dwelling (Lodge lodging?) is not in my usual repertoire, in fact up until now it wasn't even in my unusual repertoire, but here I was anyway, walking into the office of Barothy Lodge on a Friday afternoon to check in. (OK, full disclosure here, my 80+ year old mom had me by the ear to make sure I actually showed up.) 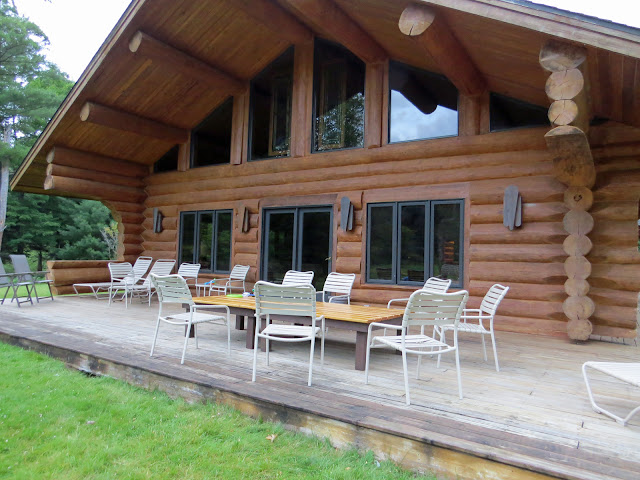 Barothy Lodge is 300 acres of rolling wooded land alongside the Pier Marquette River on the west side of Michigan about halfway between Traverse City and and Grand Rapids. The property has trails, a pool, series of fish ponds, tennis, volley ball, and basket ball courts, playground, climbing wall, shuffle board, and horseshoes. Oh, and 15 actual lodges (Hense the name Barothy Lodge and not just Barothy Park or Barothy Place.) ranging from 1 to 9 bedrooms to accommodate parties of all sizes. 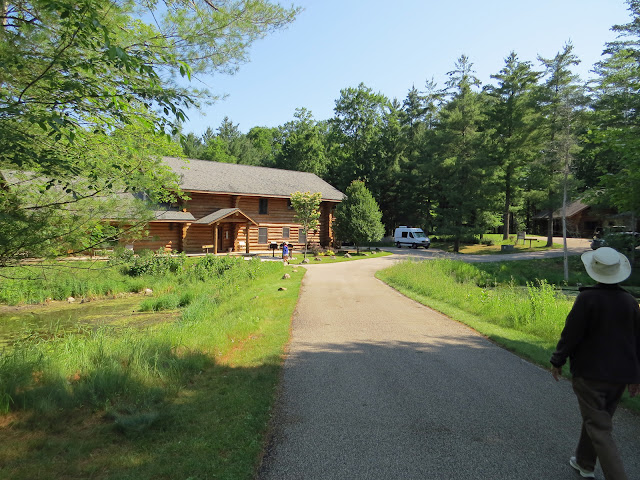 In addition to it's own grounds the lodge property is adjacent to the nearly 1 million acre Huron-Manistee National Forest and it's difficult to tell when some of the trails leave the lodge grounds and enter the National Forest. 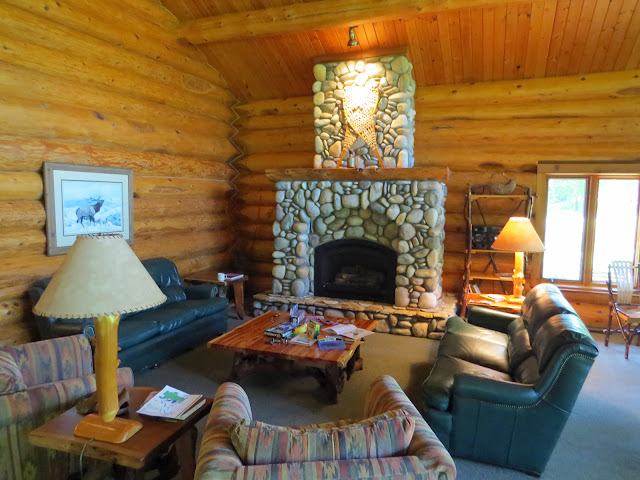 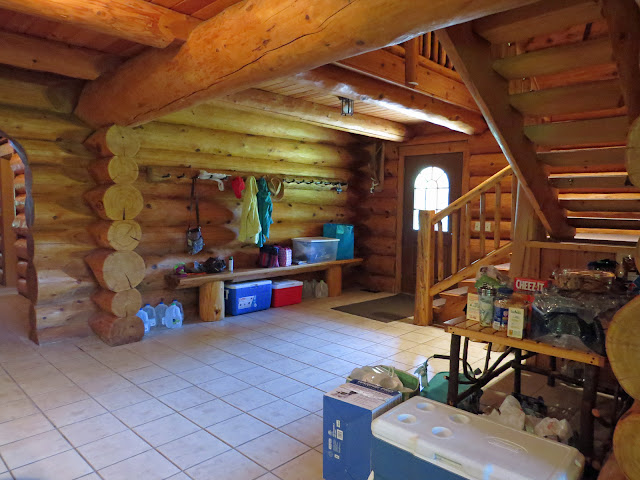 Parties book an entire lodge, and which one depends on the size of your group. Each lodge includes a fully equipped kitchen, ours, the Elkhorn, had two full sized fridges and dishwashers, along with all the dishes, utensils and pots we needed, as well as 4 full bathrooms and more beds than we could fill. 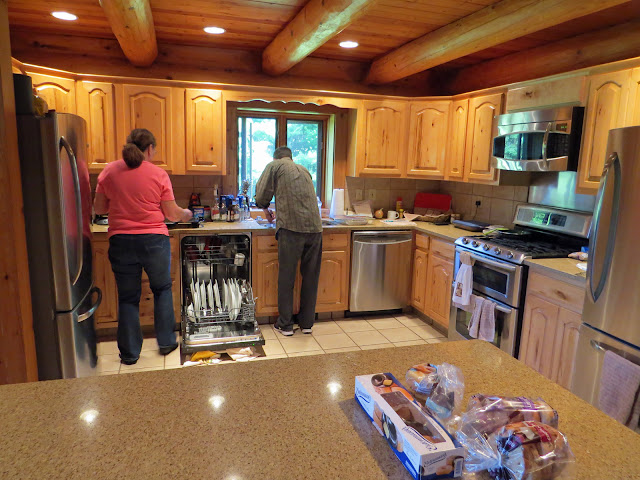 Thirteen of us descended on the Elkhorn Lodge that Friday afternoon and we didn't leave (Except for an emergency run to locate some baking powder for the made-from-scratch waffles, real maple syrup, bacon, sausage and fruit breakfast we pigged out on Saturday morning) until checkout Monday. 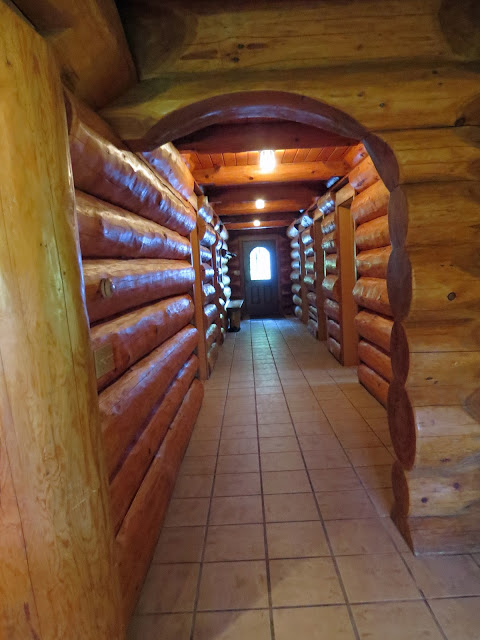 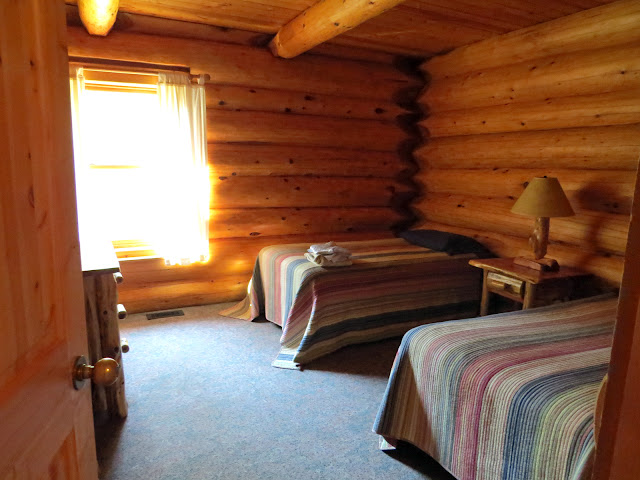 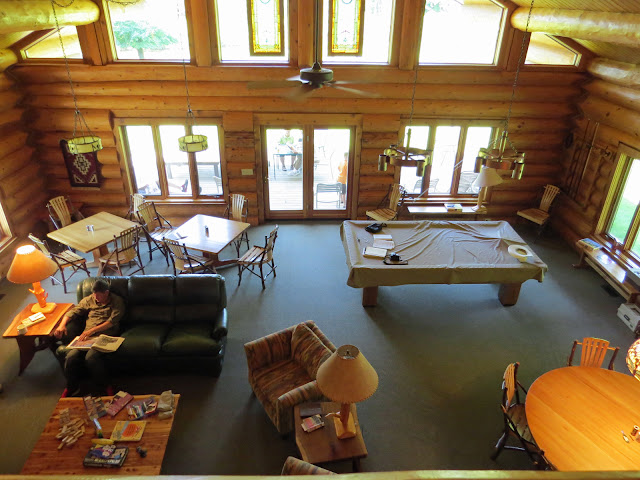 The cooking arrangement was incredibly simple and effective. It's one perfected by my sisters over the years under similar circumstances. Breakfast and dinner (Or supper depending on what part of the country/world you hail from.) were formal meals. For snacking in between you were on your own.

Each couple in attendance was responsible for one of the formal meals. That means planning the meal, collecting and transporting the ingredients, doing the prep and cooking and, after the carnage, the cleanup. Other than that one meal, your job, visa-vi food, for the entire weekend was simply that of consumption.

In addition to the very serviceable kitchen, the common areas of the lodge, both inside and out, were comfortable and well equipped, the entryway well thought out for accommodating a crowd and their necessities and the bedrooms comfortable, (Though I have to admit I spent my sleeping hours out in the van where all my 'stuff' is.) 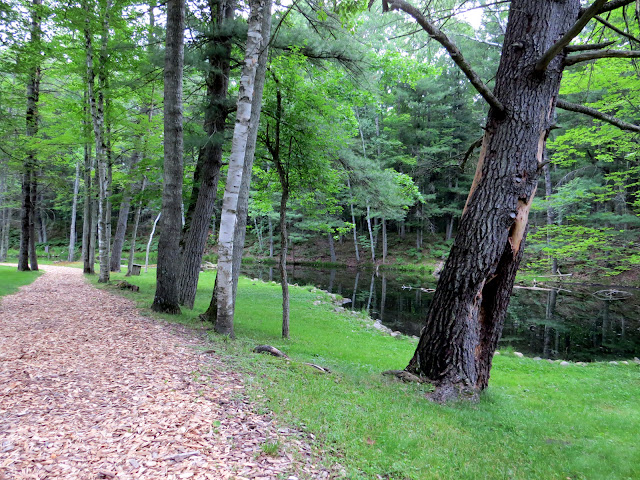 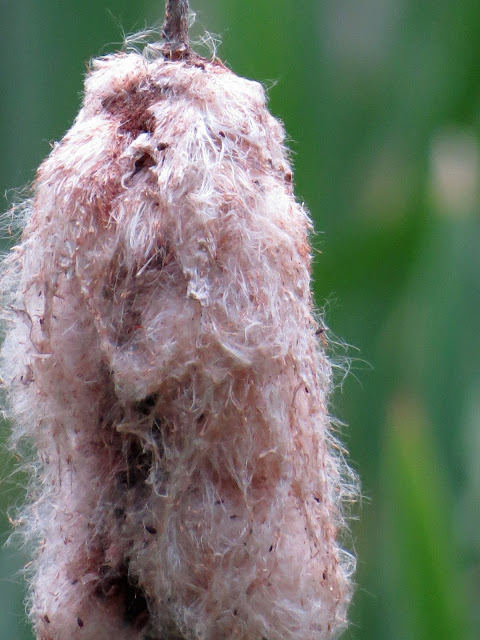 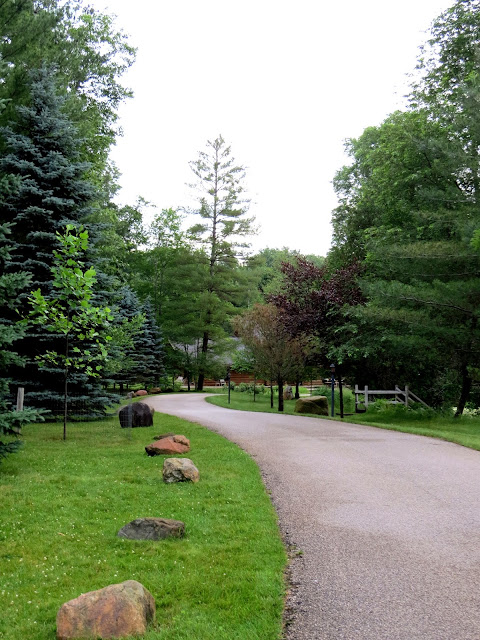 But I think the star of the show is the well maintained grounds. 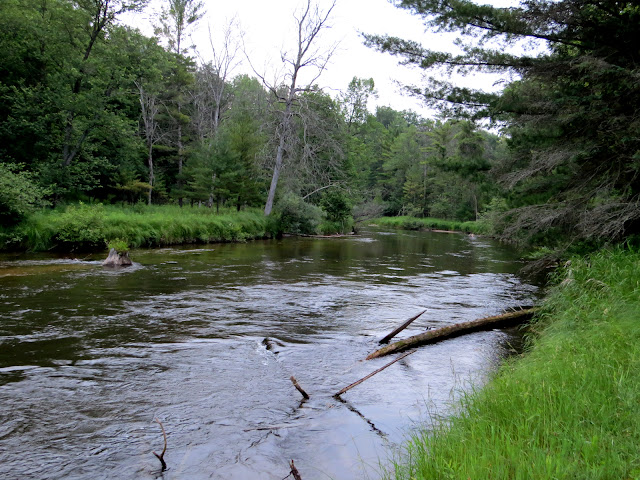 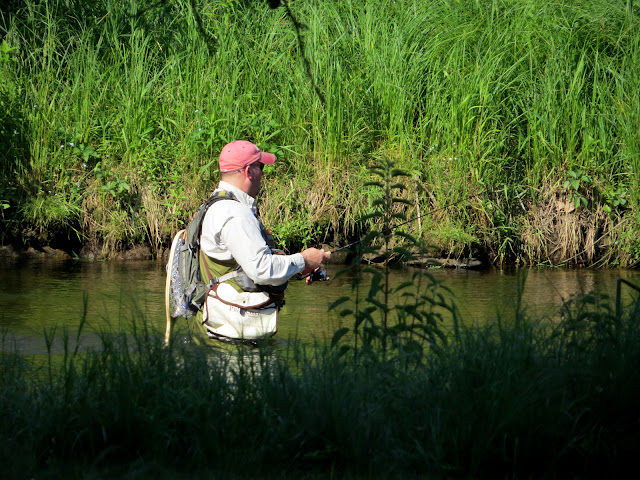 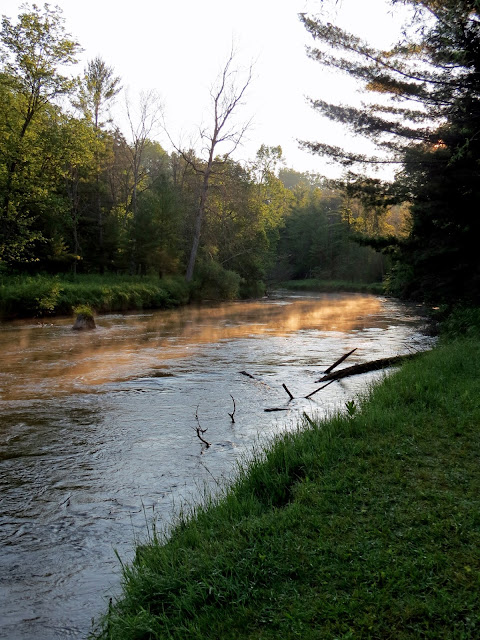 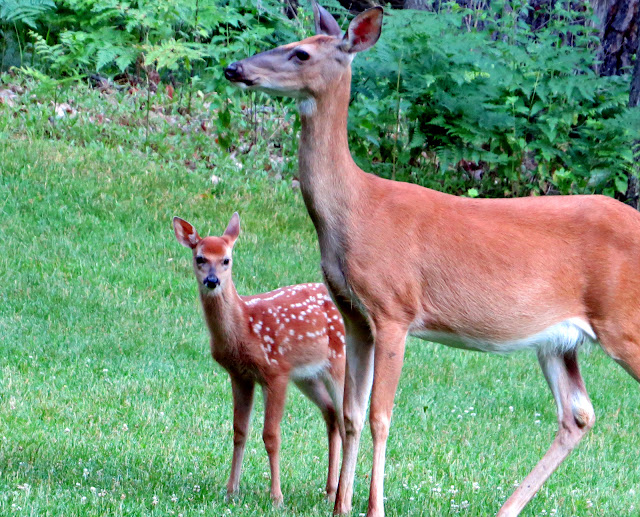 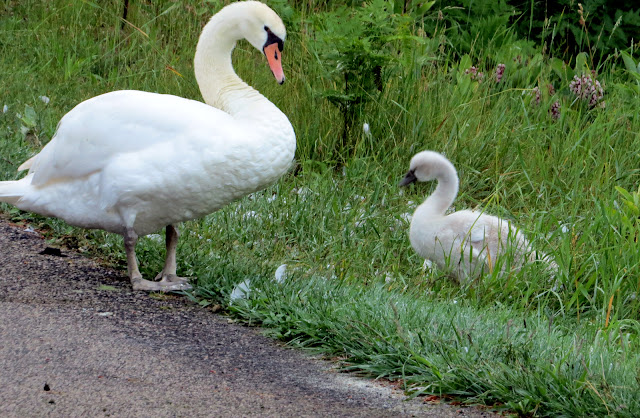 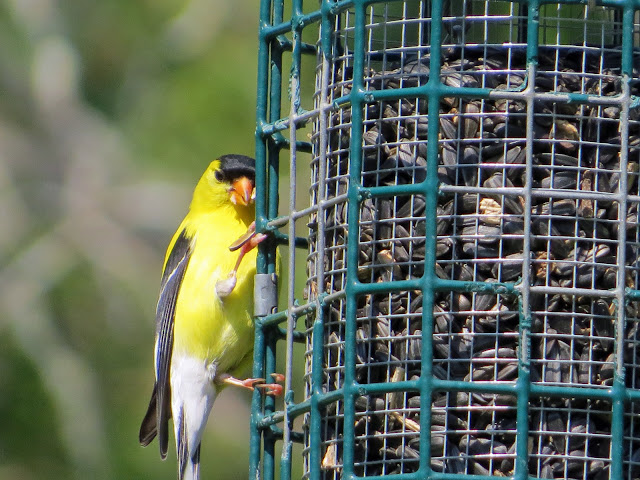 and plenty of wild life. (OK so maybe some of it wasn't quite so wild) 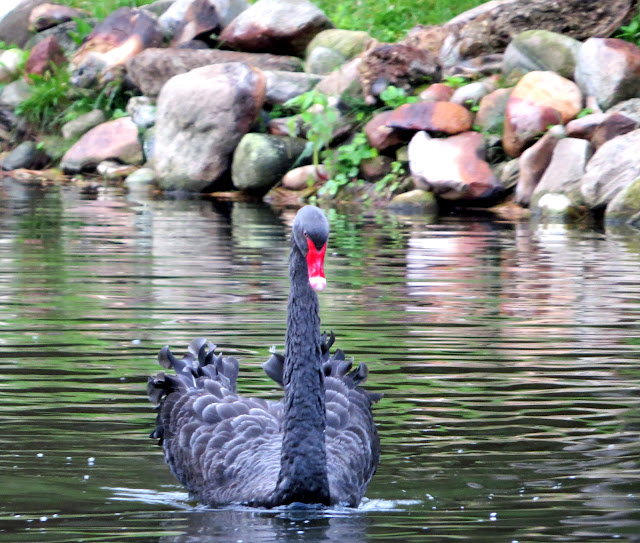 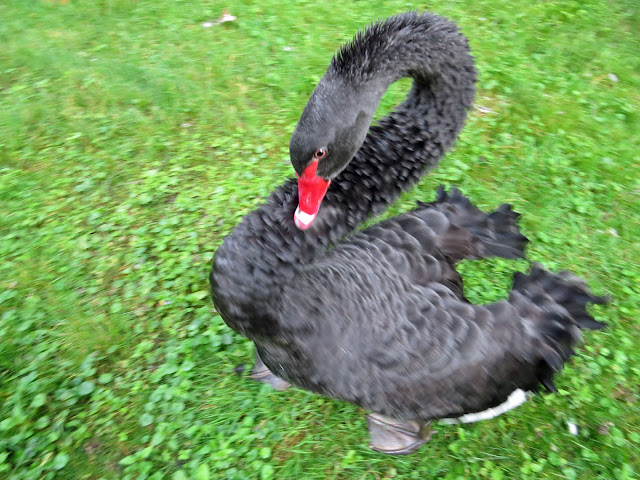 Including this bully who, in addition to the ducks and geese, felt he was also entitled to run off any humans he felt were encroaching on his territory, and his territory seemed to shift to wherever something or some else was at any given time. He would even come from as far as two ponds over if he felt that you were looking him directly in the eye for too long.

Turns out he was all bluff though so, even though I bravely offered up my body, I didn't get any actual attack photos.

Our weekend included a kayaking trip on the river as well as a Chinese-fire-drillish hunt for the eagle's nest that was supposed to be just over the border in the National Forest, but I'm saving those for another time.

When the weekend was over and we gathered up our stuff, the debris, said our goodbyes and checked out around noon on Monday, I jumped right into a mad dash back to Texas in an attempt to get home and off the roads before the 4th of July'ers got loose on me.