Unless you're from there, Indiana is probably a place you might think of once a year around Memorial Day when the Indianapolis 500 is being run, but, even though it's east of the Mississippi, (Not my favorite place if you didn't already know!) in my opinion southern Indiana is highly under-appreciated.

Unlike it's northern half which is flat to rolling, and it sometimes seems that the emphasis is on flat, the southern part of the state between the river (Ohio) and Interstate 70 is a place where the land is crinkled up like yesterday's shirt and marked with pockets of  ridges and hollows, many of them hiding delightful little gems. I've sampled a few of these along the river and near Nashville in Brown County State Park in the past and I had plans to explore the area a bit more on this trip.

But we all know about plans. In this case it was a bad starter and Tropical Storm Bill. The first delayed the start of my trip just long enough for the latter to sweep on in and creep right up along most of my 1300 mile route. Because of that double-whammy delay I had to forgo my original plan of sampling the offerings of the Hoosier National Forest, but I did manage to stop by and check out the Tulip Trestle as I went on through the area. I first heard about this place, largely unknown unless you're an enthusiast, from Steve when he blogged about it. Steve lives within a reasonable drive of the trestle and on my way there I even stopped at his house to visit for a bit.

OK, right about now those that know me have this confused, or perhaps even skeptical, look on their faces because that's just not me! I hardly drop by and visit people I know let alone strangers! It's not a habit I'm into nor one I encourage. In fact very few of my acquaintances, which include people I worked with for up to three decades, have the faintest idea how to get to my house, nor I theirs. But sometimes it's good to push yourself beyond comfort and sample something new once in a while.

Even so, between making the tentative decision to stop at Steve's and actually stopping at Steve's, I went through the process of coming up with reasons not to do, it then pushing them aside and returning to my original resolve, and then starting over again, several times. I guess it just so happened that on the day in question I was in one of the 'resolve' cycles.

All in all I'm glad I stopped though. We had a nice visit and now I have a face to put to the blog. (Though he nearly gave himself away once by unknowingly photographing a partial reflection of himself in the freshly washed window of his car!)

After leaving Steve's I carefully tracked the little green dot that is me on the Delorme Topo running on my laptop, the setup that I use for my vehicle-based GPS. I worked my way through the little community of Bloomfield, not to be confused with the larger college town of Bloomington further to the northeast, and on up SR157 to a series of little lanes that would eventually meander me on back to a valley formed by Richland Creek, which in Texas we'd actually call a river.


Looking closely at my Delorme Topo it looks like there may be two or three ways to drive into where the somewhat isolated trestle is, but we're talking about a map that, when zoomed in close, shows driveways as well as roads and sometimes 'road' is stretching the definition. For instance, not too far from Steve's house there is an abandoned, deck-mostly-missing steel through-truss road bridge yet my map still shows the county road going merrily on across.

We've all heard the stories about people following their GPS right down the boat-ramp and into the lake, but people keep doing it anyway. My advice, let your GPS tell you where you are, but never, ever let it tell you where to go!!! Let your eyes out the windshield and a little common sense take care of that part.

So anyway, I can't vouch for any other way in there than the one I took, which originates north of Bloomfield. Though it's narrow, about a lane and a half most the way, the route was paved except for the last little bit up along Richland Creek and was easy to drive, as long as you can handle slow because there's many turns and a couple short but steepish grades. But if you're driving an RV be aware that along the way you have to negotiate two 11' underpasses, both of them under the same track that crosses the trestle. Fortunately the Van tops out at 9'8". 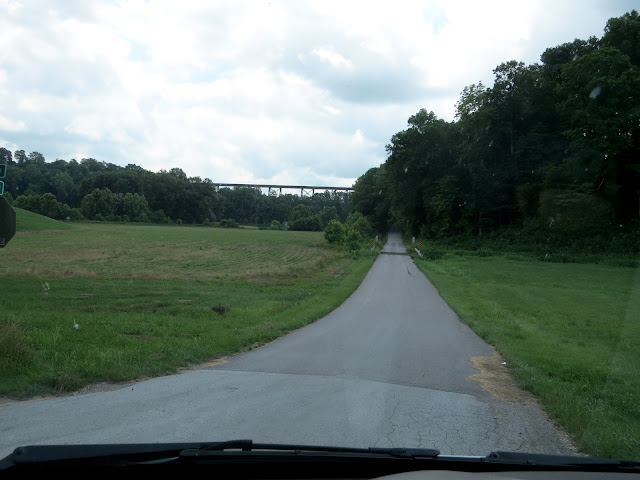 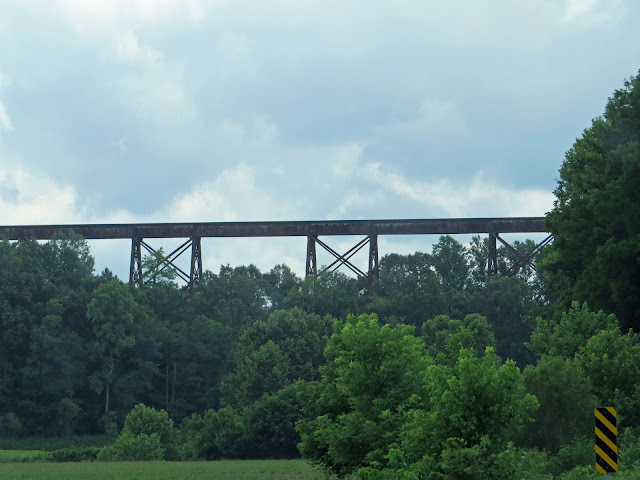 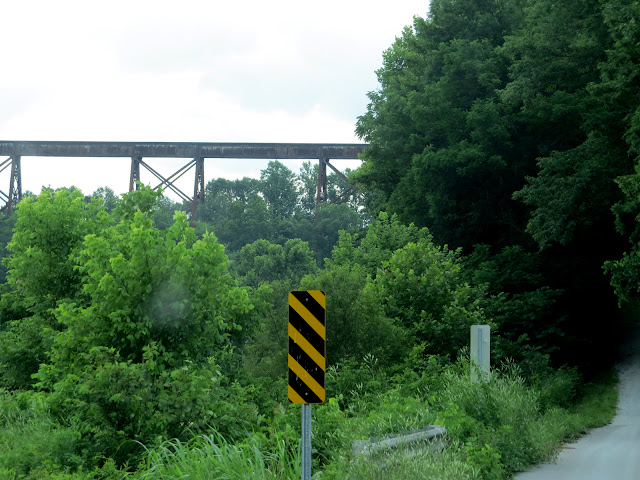 This trestle doesn't carry the tracks over Richland Creek, it carries them over the whole valley! 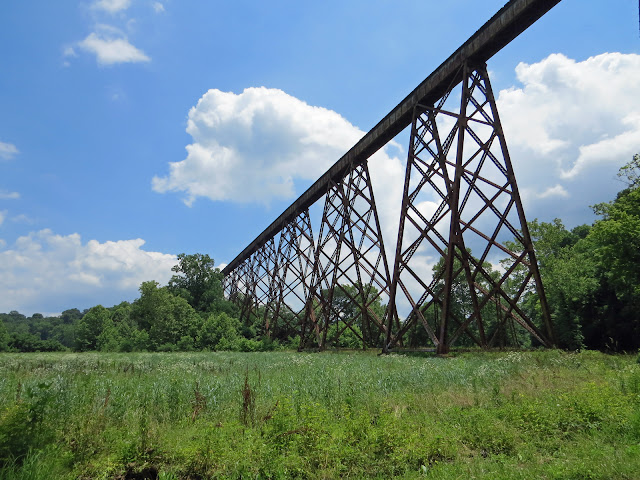 At about 2300' long, (Give or take a few feet depending on who's doing the measuring.) the Tulip Trestle is the longest RR Trestle in the US and the third longest in the world. It's still an active rail line, though I've heard everything from a little as one train a day to as many as 6. I did hang around for as long as I could given my compressed schedule, but it wasn't long enough. No train for me. . .


I couldn't actually see either end of the trestle from the valley floor. There is a "path" climbing the steep bank just there off to the right of the photo above that I've read will eventually take you up to track level, but it's currently marked as no trespassing and wildly overgrown. And, of course, the railroad property itself is also no trespassing.


When they built this trestle they didn't add anything that didn't absolutely have to be there, which must leave the train crew with a terrifying sight as they approach!! I wonder how many first timers try to hold their breath for the nearly half mile trundle across 18 spindly riveted-steel towers on what must look like nothing more substantial than a spider's web?! I doubt it would make them feel any better about the whole situation to know that the bridge was build 110 years ago using labor paid a whopping 30 cents an hour! 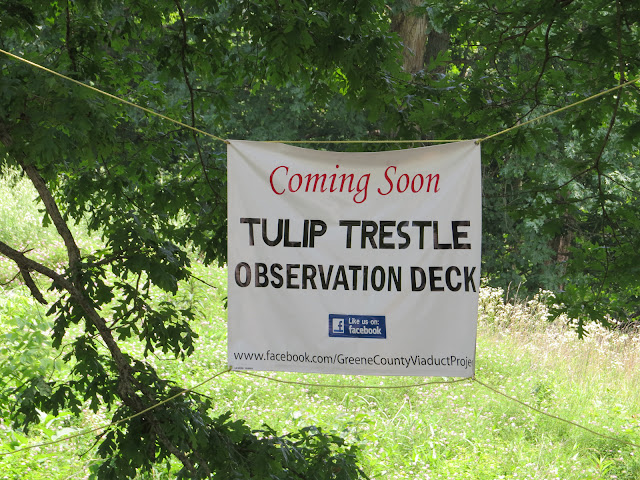 Apparently this observation deck, down on the road approaching from the north side of the trestle, has been in the works for some time 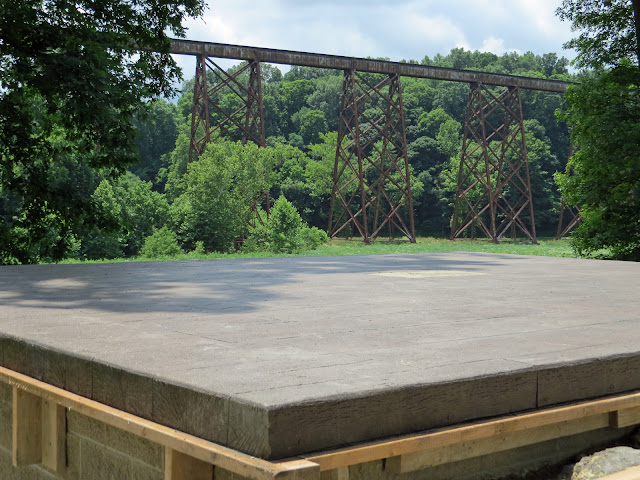 But it's getting there, with a small gravel parking area (3 or 4 vehicles.) and pretty fancy stamped concrete platform already in place. 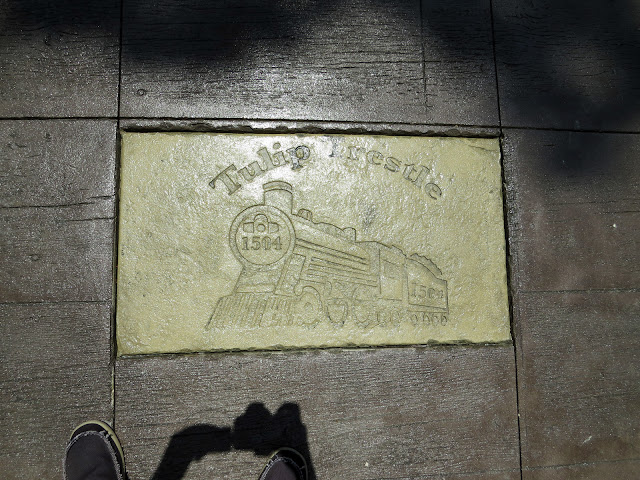 Now I imagine it's waiting for some railings, seating and, hopefully, an information placard or two. 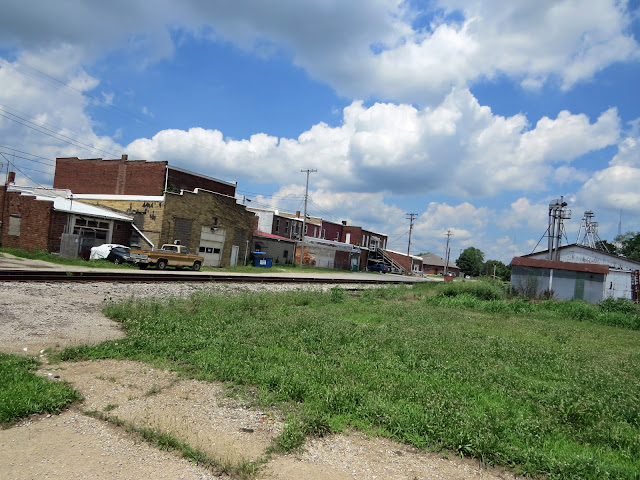 I was too busy making sure I stayed on track (No pun intended but it kind of does work doesn't it?) going through Bloomfield to notice, let alone stop and photograph the track which goes through town 8 or 10 miles after (Or before, depending on which way you're going.) it crosses the trestle, but I did manage to get this photo of the back side of main street in Worthington as I headed back out on my way north.

Maybe it's just me, but though the front side of streets like this can be pretty, the back side is usually more interesting.