When I set off on this latest road trip I didn’t expect to be writing about my first day out since it would consist mostly of a drive up US59 through eastern Texas. This is a road I have a 34 year relationship with, much of it from the days before bypasses and improvements and multi-lane-ing; back when it was an intimate meander past the ends of people’s driveways and through the middle of their communities, a drive that means a lot to me but not one that’s likely to be of any interest what-so-ever to others. 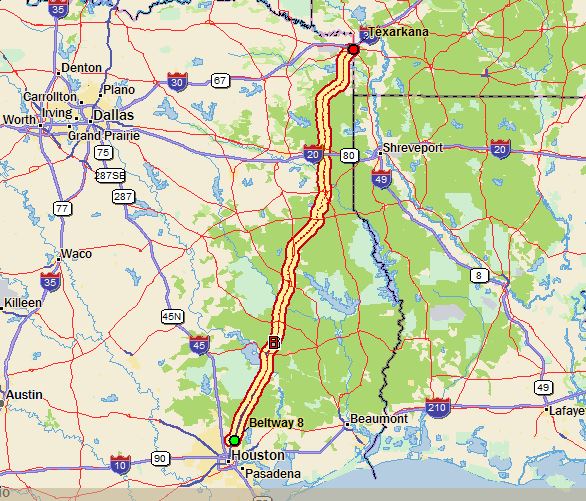 But I tend to think a lot when I’m driving and today I was pondering (Pondering; now there’s a heavy word!) on why I have such an attachment to this particular bit of highway, even now that most of it is no longer recognizable as the road I used to drive three decades ago, two decades ago, even just 5 years ago.

Today the slow crawls through little East Texas towns that gave me a chance to see them, breath them, hear them, smell them, have been largely replaced with bypasses that, maybe because they themselves are soulless, over time tend to suck the soul right out of the towns they circumvent; the curvy, undulating two-lane stretch that got me up close and personal with the numerous creeks and waterways that slowly meander down towards the Louisiana/Texas border and finally into Cado Lake, has been buried under a new, straighter, higher, divided 4 lane that zips over the land instead of through it; and the twisting, diving curve that ducked under the tracks via a low bridge just south of Shepard that inevitably showed fresh scares of too-high loads and inattentive drivers, has been replaced by a high-tech, high-speed, high-altitude, zero personality, fly-over.

In the course of my nearly 300 miles of white-line pondering I came to the conclusion that it clearly isn’t today’s road that I feel a connection to, but rather the memories of that old road traveled so many times in years long gone; and the important thing about memories is the feelings they invoke. And that got me to thinking about just how I would go about successfully conveying those feelings to others, and that brought me back to a question I’ve pondered (I know, overuse of the word, but this is heavy stuff so I might as well stick to a heavy word.) off and on since I was a teenager, a voracious reader that lived in the world of words, but was also slightly uneasy with them.

That question?: When man developed a spoken language we obviously made a quantum leap in communication, but at what cost? What did we also lose in the process of defining our world and experiences within the confines of words??

Oh sure, it’s pretty handy when your significant-other can just speak up from across the room and tell you to stop being an ass in front of the company instead of having to get up, walk over, and hit you up-side the head with a mastodon bone, and I’m almost positive it was a lot safer for everyone involved when someone could just holler out ‘There’s a sabre-tooth, behind you!’ rather than have to pantomime the danger. (About the time you got that it’s 5 words, and the 4th word is ‘behind’, you were well on your way to becoming cat poop! But then again, there were no words so how . . . Oh never mind.); but on the flip side, how many times have you or someone around you said something like ‘words just can’t describe it’ or ‘I don’t know how to put it into words’ or one of a dozen other phrases along those lines?

By definition, (Pun so intended!) words have boundaries, and fairly narrow boundaries at that. After all, it would kind of defeat the whole purpose if a word was an amorphous construct that could mean anything from  ‘umm, meat good!’ to ‘crap! my hair’s on fire!’, (Though occasionally the English language tries hard with words like peace and piece, or tail and tale, - - OK, it’s either interesting or says something about me personally, probably something not very flattering, that one word of each of those pairings that came so quickly to my mind can be used as slang for the same, slightly disreputable, thing!) but what about everything that got left outside those tight little word-boundaries?

Some concepts like ‘up’, ‘round’ and even ‘tree’ fit nicely into narrow definitions, but others, particularly the ones involving emotions and feelings, are significantly more problematic and fall into two primary classes.

First there are the words that involve personal interpretation within their delineated boundaries. When I say ‘stepping on that nail hurt’ the stepping-on-the-nail part is going to be fairly accurately interpreted by anyone I’m telling my tale of woe to. There might be some variance on the perceived size of the nail, but the concept is pretty clear to all parties, but the ‘hurt’ part is a whole ‘nother ball game. I could be a person with a low pain threshold talking to someone with a high threshold. In that case, what sent me screaming to bed for three days with a fist full of prescription pills could be interpreted by the listener of my story as an ouch with a few hops thrown in to shake it off before I went on my merry way. We’re communicating the basics, but the details (And how many times have we heard ‘it’s all in the details?) are not being decisively and accurately conveyed in the process.

This seems like a significant fault in a tool that we’re supposed to communicate with, but the second class is actually much more problematic and is the one that has occupied my thoughts off and on for at least 4 decades. Those are the words that attempt to quantify that which isn’t easily quantifiable. Those are the words attempting to confine and distill pure emotions.

For instance, obviously ‘love’ existed before we had a word for it, but when we created that word did we really capture all of ‘love’ within the definition? I don’t think so; otherwise we wouldn’t struggle so with expressing what love is. I think it’s more likely that we trimmed off  and discarded hundreds of inconvenient little bits of ‘love’ that defied narrow word-boundaries.

And I wonder if, after millennia of interacting within the limitations of the spoken word, we have now lost the ability to move past those problematic boundaries, the constraints, of those words and move freely into the spaces between them where we left all those extra little bits. Have words, for all the immeasurable good they do, also limited the range of our experience?
I’m not sure, but I do know that when I consciously try to experience something in the realm of pre-language, in a realm of pure emotion without the constraints of Webster, I find myself instantly attempting to quantify that experience with the language of words. I’m not saying I can’t feel outside the boundaries of our words, but I’m not sure I have the ability to dwell in that realm long enough to experience it. And I certainly don’t have the ability to accurately and decisively convey that experience to others. So I think, for all intents and purposes, that those spaces in between the words are lost to me. And that’s a little sad. (What do you want to bet that you interpreted that last sentence, which involves a feeling, slightly differently than I meant it?!)
All of this was a long winded way of saying that my connection to this road, US59 through Texas, is very personal, and, even though the basics, the raw outline, of that connection live within me in the form of words, over all it will have to remain a private experience, not because I don’t wish to share, but because there’s so many lost spaces between the words I just don’t think I have the ability to do so.

OK, I was planning on stopping right there. It was a good place to stop, it was a strong ending, and I'm sure most would agree that I should have stopped, but I just couldn’t resist a little word trivia.

The printed version of the Oxford English dictionary, second edition has about 500,000 words in it.

The average college educated American has a vocabulary between 20,000 and 50,000 words.

In 1950, when reading to young children was still popular, the average 4 year old’s vocabulary was around 4000 words. By 1990 parents weren’t reading to their children near as much, (Reaganomics? More time devoted to clawing for the 'American Dream' and less devoted to family?) yet the electronic proliferation of internet, hand-held devices and cable channels hadn’t happened yet, and that might explain why the 4 year old’s vocabulary had dipped to 1000 words. (I’m going to go out on a limb here and guess that ‘No’ and ‘I want that’ are the most used regardless of the size of the vocabulary.)

Shortly after his death in the early 1600’s, a compilation of 36 of Shakespeare’s plays, now known as the First Folio, was published. The First Folio is around 900 pages long and encompasses a vocabulary of 27,000 words, or about 30 unique words per page.

The King James version of the bible was first published around the same time, is about 1200 pages long (That varies a lot unless you have one of the 'official' versions licensed in the UK.) and contains a vocabulary of around 12,000 words, about 10 unique words per page.