As You Like It is the title of Shakespeare's most bucolic, fairytaleish, feel-good play. He even PG13'ed it by removing some of the violence and adding the mid-play conversion of a villain into a good guy when adopting the work from Thomas Lodge's Rosalynde. (OK, so I did seem to vaguely recall that the play was adopted from a published work, but I had to go look it up to confirm that and get the details. My memory's not that good!!)

Anyway. . . After a long hot summer here in Central Texas followed by really crappy fall weather courtesy of El Nino, we finally had a forecast for a string of sunny, lows in the 40's-highs in the 70's, days. You know, bucolic, fairytaleish, feel-good weather; As We Like It.

Armed with the forecast and combating a bad case of cabin fever, as soon as the weekend hoards were safely crammed back in their cubicles or chained behind their school desks I hit the road and blew the dust off The Van.

Nothing earth-shattering. In fact it would barely count as a stroll to the local pub for Lewis and Clark or a morning amble around the block for a one-armed Powell, but I'm living my life, not theirs, so I headed on over to one of my go-to spots intending to put in as much hiking over three or four days as my hibernation-atrophied, cookie-bloated legs would stand for.

I've been here to Pedernales Falls State Park so many times the collection of my GPS tracks is turning into a big red blob. But that's OK. Though I'm beginning to recognize certain individual trees and even a few rocks out there in this 5000+ acre park, there's always something new.

Before going down and occupying my camp site on the afternoon I arrived in the park I drove on up to the the falls area at the north end. This saved me about 4 miles of additional hiking required if I had started out from the campground itself, and frankly, since the falls area is not my favorite spot in the park it's not often I find that four miles plus whatever hiking I want to do once I get there worth it. Sure, it's the namesake of the park, but it's also the spot where a good 70% of the park visitors gravitate to so there is always going to be people there, sometimes a lot of people, 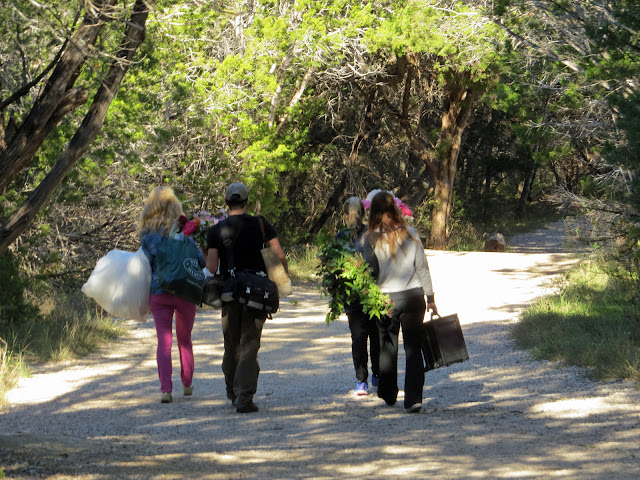 like this group heading down to the falls in front of me for some bride photos. Fortunately there's a fork in the trail just ahead. (OK, here it's more like a road than a trail. Just one more reason it's not my favorite spot.) They stuck to the left, I took the right.

My main objective for going to the falls area was to see if I could find the official Texas State Parks Geocache Challenge geocache. Though I've stumbled on a number of them, geocaches, by accident, I've never deliberately looked for one before, so I've never officially found one before; and I still haven't.

There's only one official 'nature trail' in the park and that's a half-mile loop just off the edge of the campground. The trail referred to in the description above is more of a chaotic network of paths created by all the people that (over)visit the falls area and, according to my GPS anyway, those coordinates are about 30 feet south of anything resembling a trail or path, though I may have been overly trusting the electronics and taking things a little too literally. After all, five decimal places is a lot, even when we're talking Earth scale!

At any rate, even on a weekday there were too many people scrambling around for my comfort so I didn't spend all that much time trying to find the cache. 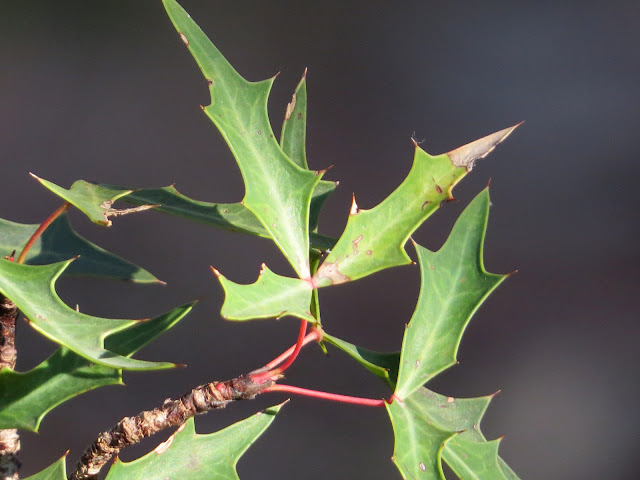 Instead I wandered back to the campground where I was in time to catch some afternoon light on the real and otherwise devoid of people, nature trail. 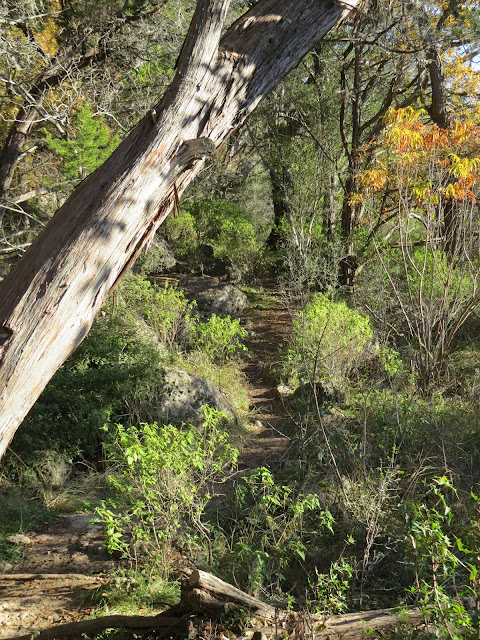