Foiled by Common Sense (Or was it Chicken Feathers??)


I've spent a lot of time in Pedernales Falls State Park and one of my favorite places to go tromp around is in the northeast corner of the park.

In the late 1800's there used to be a small settlement called Schoolhouse Flats straddling the border of the park right up there in the very northeast corner. According to historic maps the schoolhouse itself was actually located on what are now park lands but I've never been able to find any sign of it though the remains of a cemetery can still be found on the park side of the fence. 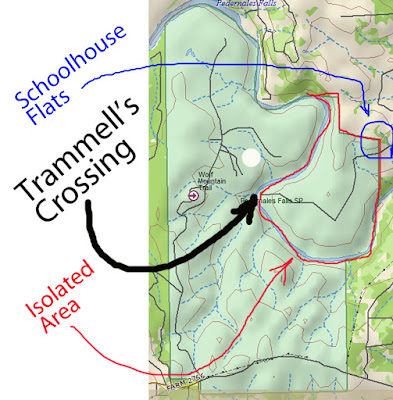 But that corner of the park is isolated from the rest by the river to the west and south and private property to the east and north, which, of course, is one of the attractions for me as the isolation tends to cut down on the number of people over there. (Which is mostly a psychological attraction since I rarely run into people anywhere in the park anyway except at the falls area itself. But psychological isn't so bad. . .)

Now here in Texas the law says that a fence is the same as posting No Trespassing signs. And you know that old adage about if you shoot an intruder climbing in your window don't leave them out in the yard but drag them inside before calling the police? Well here you don't have to bother dragging them inside because once they stepped onto your property they were fair game anyway.

Point is, the only prudent way to access that corner of the park is by crossing the river, and, without going for a full-on swim in the cold current of a rocky river, Trammell's Crossing is the place to do that. Except that this time when I went down to the crossing this is what I found. 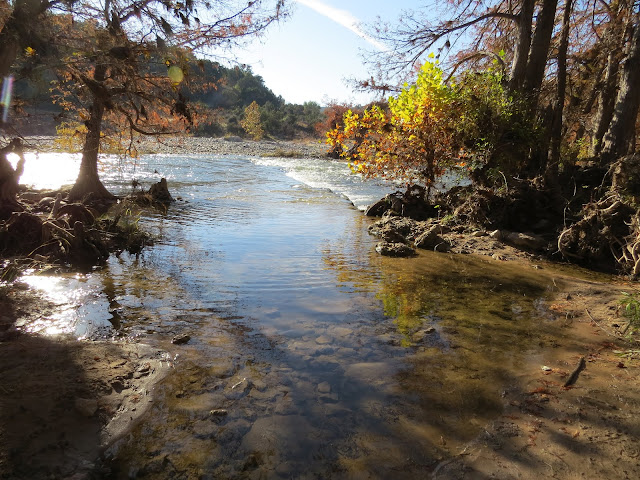 Now I agree, that doesn't look so bad (Especially if you don't full-screen the video, which you probably shouldn't because the conversion process necessary to get the video uploaded to Blogger really screws up the quality!) but you see that little mound over there under the bright yellow-green tree?  That's usually dry and it's where I normally sit to change from hiking boots to water-shoes and back again. Normally the water at the crossing is about 12 to 18 inches deep, (When not flash flooding that is, but I'll get to that in a second.) but right now there's another 12 inches or so on top of that.

I'm sure I could have made it across all on my lonesome just fine, but being on my own with no one else around to impress with my great feats of daring also makes it much easier to hear what that little common sense corner of my brain is saying. (I prefer the term Common Sense since it sounds more manly than the possibility that I'm growing chicken feathers on the back of my neck. . .) And you know, over the years I've learned to like that little corner of my brain, so I decided to save that part of the park there on the other side of the river for another time.


Flash flooding isn't unknown around this part of the country and if you don't pay attention you are a fool, maybe a dead fool. El Nino has driven a significant amount of Pacific moisture across Mexico for the past year or so where it has combined with Gulf of Mexico moisture on a couple of occasions, one of which occurred around Halloween. This time it didn't kill near as many people as the Memorial Day flood but it was still bad enough to flood the control tower at the Austin airport and shut it down for months.(A portable tower was brought in while the mess was cleaned up.) 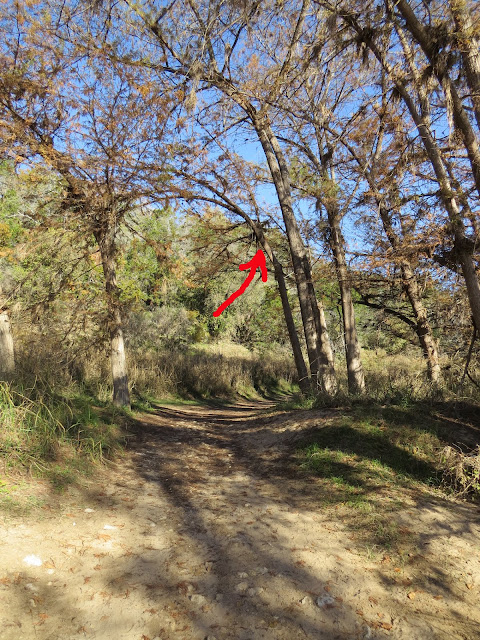 After I took that photo of the crossing, I turned around in my tracks and took this photo. 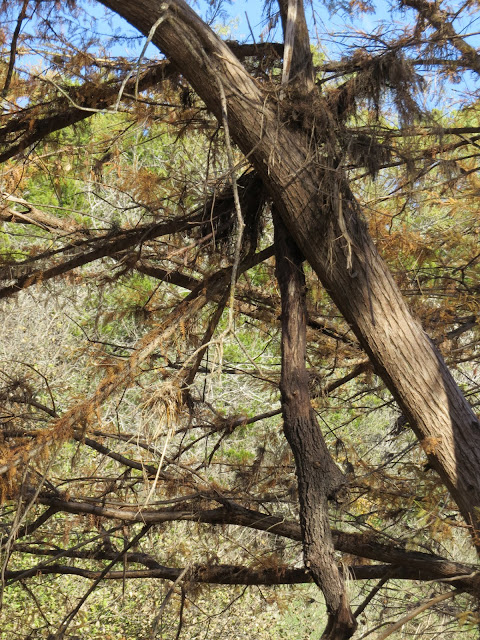 and this is a zoomed shot of the area pointed to by the red arrow. That's flood debris up there and, using my 4' hiking stick as reference, I estimate it's sitting about 20' above the base of the tree which is another 6' or so above the normal level of the river, and that's not the worst I've seen here!

Back around 1998 I stayed at the park a few days during which I forded the Crossing a couple of times. I moved on to some other parks further west and came back about a week later and I ended up photographing the effects of a 35' flash flood that ripped through while I was gone. . . The water in the Crossing was still too high for my taste that time too!