Tales from the road: The Christmas Freeze

Back then my wife (Well she wouldn't officially be my wife for another 4 years but you get the idea.) still traveled and even camped on occasion, and that's exactly what we did that Christmas. That was the plan anyway.

We packed the tent, sleeping bags, cooler, cook-gear and ourselves into a tiny Toyota pickup and on Christmas Eve fought our way clear of the city (Houston), four hours later braved the demented on-ramps and confusion of San Antonio, and finally headed west on US90, making our way towards Lost Maples State Park. 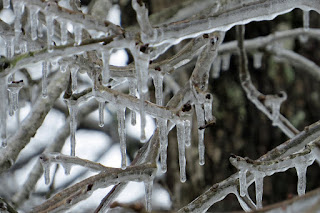 But by the time we got to Hondo (What a great Texas town name! Hondo; it just sounds Texan.) we could no longer ignore the dire warnings coming at us from every side. Warnings we, in our work-a-month-get-a-few-short-days-off desperation were hell-bent on ignoring.


Back in Houston, where it was common practice to run the water lines through, and mount water heaters in, unheated attics, record cold that had Santa and his reindeer feeling right at home and kept roving plumbers and carpet layers busy for the next month, settled in for a long night. Out along the fringes of the Hill Country, where we were, it was starting to rain; not hard, but a freezing rain that was sticking to the windshield, not to mention the road. . . 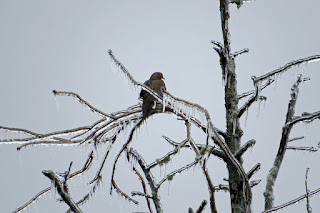 From somewhere; I'm not sure where, but from somewhere; between the two of us us we managed to dredge up a bit of common sense and holed up for the night in a little motel there in Hondo. A room on the back side, away from the road and out of sight of the office.

There we moved the $2 hotel chairs with their creaky wood armrests and funny smelling upholstery out of the way, surreptitiously schlepped our cooler, stove and kitchen stuff from truck to room, and 'camped'.

Overnight the rain stopped and Christmas morning found us breaking camp, which meant sneaking our gear back to the truck pretending it was the bounty of freshly unwrapped gifts and not the detritus of an illegal in-room kitchen, and slinking away on wet but largely ice-free roads.

Easing over a couple of still-frozen bridges we covered the last 60 lonely miles to Lost Maples. 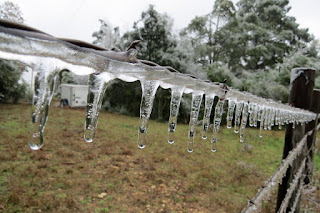 Being Christmas day we didn't expect a lot of people to be about, but the headquarters was dark and locked up tight, and we couldn't find a ranger anywhere to pay our entrance fee to! In slink mode once again, unstickered we illicitly eased past the gate and on into the park.

Leaving the Toyota sitting there in the farthest corner of the day-use parking lot all on it's own, we tip-toed on up the East Trail like Boris and Natasha sneaking past Bullwinkle. We followed the ice-rimed Sabinal River past Monkey Rock and deep into canyons where the sun didn't reach. 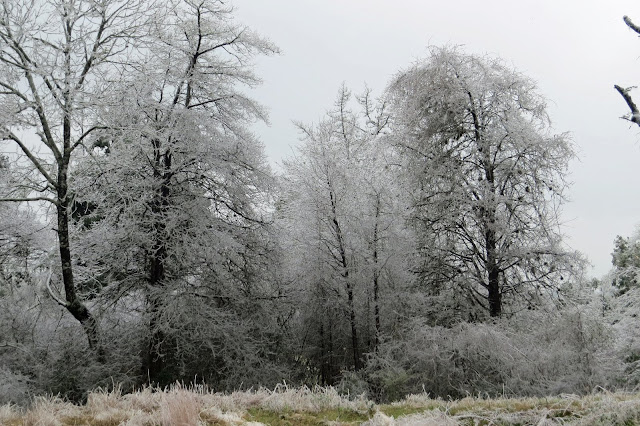 Everything was covered in ice and the only sounds were the crystal water playing in the river and the drip drip tinkle of ice being shed from the trees, punctuated by the occasional glassy crash as a sheet of ice slipped off the steep canyon walls and shattered into a million sparkling shards.

It was breathtakingly beautiful and an awesome place to be on that day.

It wasn't what we had planned, but that Christmas turned out to be one of the few that really stands out in my memory and doesn't get all smushed up into the jumble that is the majority of my Christmases.

(And this has reminded me of a much more melancholy, but still road-trippy Christmas, but that will have to wait until next year now.)