What the Hell?!! Too Many Chins!

OK, so I've had my new beater bike for several days now but the riding has been very limited because I can't find my old bike helmet.

I know, I know, any respectable scrotum-toter wouldn't let a little thing like that stop him.

Well I guess I should confess that way back when I received my official male-macho card, sometime around the transition from single digits to early teens I think, I only had the thing about a week before it went through the wash, at least twice judging by the state of it, and ever since then it's been a pretty fuzzy, certainly less authoritarian, and I find it isn't accepted just anywhere in the state it's in. (Ever try to get on a plane with an old-school passport, you know, before they started plasticizing the pages, that's been windsurfing in the ocean off a Venezuelan beach??  I have and they were not amused. . .) Besides, macho or not, during my serious biking days I had to replace two different helmets because I threw them down on the ground - hard - with my head inside - so I figure breaking a $30 helmet is less expensive than cracking my skull. 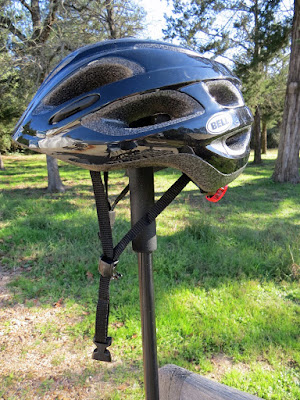 Anyway, today I made a 100 mile round trip to pick up a new helmet. (I just couldn't talk myself into the bright florescent one with a spiky plastic mohawk on top that the local Walmart, only a 30 mile round trip, was offering.) 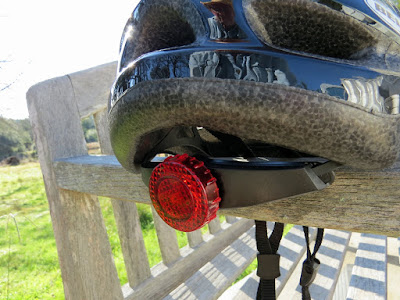 And  also got an unexpected bonus!

You see that fancy little strap-adjuster knob thingy? Well it has this cool red LED built right in.

Push on it once and the red glows steady, push once more and it flashes!

What will they think of next?!(Oh crap! I just sounded like my grandmother!!) 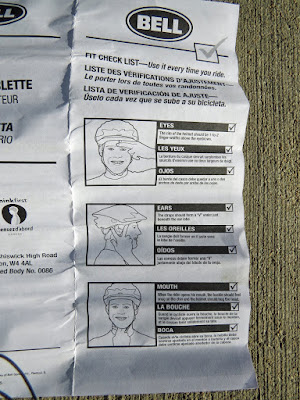 Now you would expect that in a litigious society such as ours that all safety devices would come with thorough instructions, especially the devices that have to be properly adjusted before they work right.

Well I'm here to tell you, I don't know what this bozo on the 'quick menu' thinks he has to grin about. 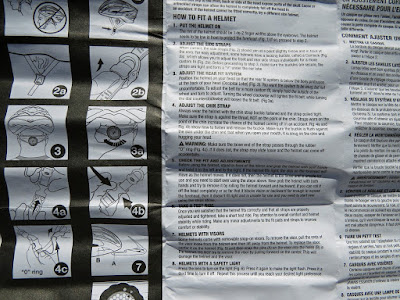 Because even when I turned the paper over and carefully read the more complete instructions on the other side they still failed to make it clear just which chin I'm supposed to be adjusting the strap for!

I don't know when the hell it happened, but the fact of the matter, a fact mercilessly pointed out to me once again this afternoon, is that I now have more than one chin flapping around under there.


But I'm apparently on my own to just guess at which one of those chins I need to cinch the strap up to for maximum safety.

I can only assume that the instructions were written by some punk 25 year old kid  that barely has any hair under there let alone a plethora of chins and he never gave even a passing thought to the needs of all us boomers out here.

Maybe it's time we, the more wizened - and wrinkled - and fluffy - among us, demanded equal representation!! 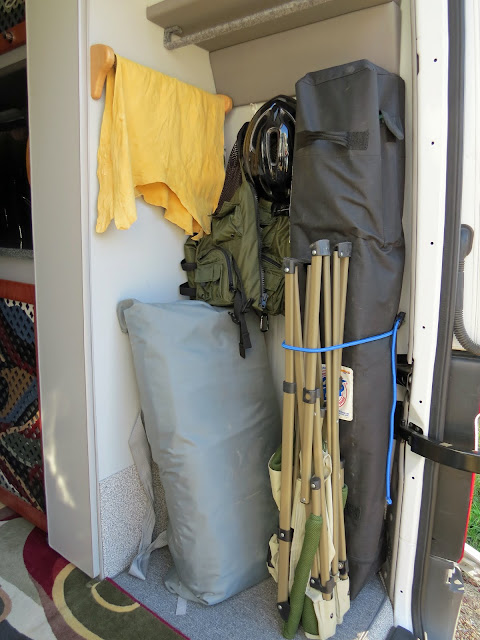 With the addition of one more Combat Command Strip hook the helmet has its place just inside the rear door of The Van along with the awning, camp-chair, kayak, life-jacket, and bath towel.