The long-term average annual rainfall here at the homestead is just over 40 inches.

This year the rain gauge got pounded with nearly 71 inches of the stuff. That's over 20 inches more rain than 2010 and 2011 combined! 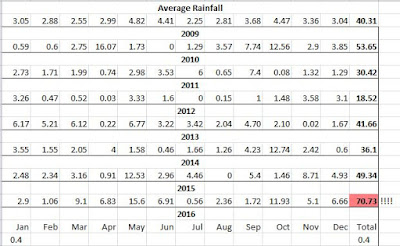 In 2015 Central Texas had two record floods with loss of life, (both on holiday weekends.) lost a mess of bridges, some of which will take upwards of two years to replace, some of which may never be replaced, and more than half of the State Parks in the area were damaged to the point where trails and campgrounds are closed for the foreseeable future.

Now we've just come off a multi-year drought around here so I probably shouldn't be saying this, but could somebody just turn the rain down a little bit??

(Did I mention that 4 days into 2016 we already had nearly half an inch recorded for the year? And right now there's three lows strung out like a soggy conga-line between here and the north Pacific, all heading in this direction!)