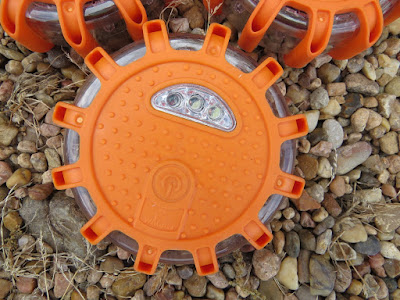 Since it's trademarked, I suspect that only Wagan, the company that builds the ones I have, is allowed to use this term but it gets the point across. 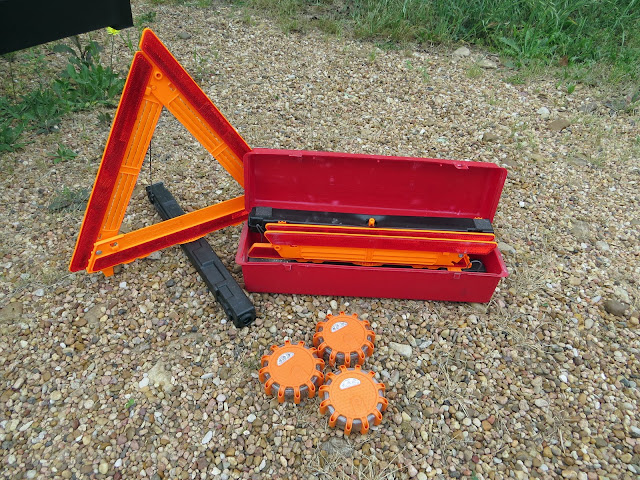 Because I've harped on the theme more than once on these pages, some of you may know that I'm a whatif'er. In this case, what if I get a flat or otherwise breakdown and can't get off the road any farther than the shoulder?

For years, in addition to a high-vis vest, I've carried the standard emergency reflective triangles, moving the red plastic box from old vehicle to new vehicle several times. (The vests are cheap and I've heard that some of them lose some of their reflective quality over time so I just replace those.) Fortunately I have never actually had to use my triangles, (The last time I had to do an actual road-side tire change was on my little Toyota pickup some 30 years ago, before I became a whatif'er. Just goes to show, being prepared often helps prevent needing to be prepared!) but I faithfully carried them along none-the-less.

Until a few years ago that is. That's when I came across the Wagan FRED's.

I was out on the road, coming down a hill somewhere in the daylight and easily saw flashing red lights about a mile ahead. There was so much flashing I figured there must be quite a wreck up there in front of me and I moved over to the left and slowed down, but it turned out to simply be a broken-down flatbed tractor-trailer on the shoulder.

I wasn't the only one impressed by how visible he was, the chatter on the CB from other truckers was pretty heavy as they commented on it as well. 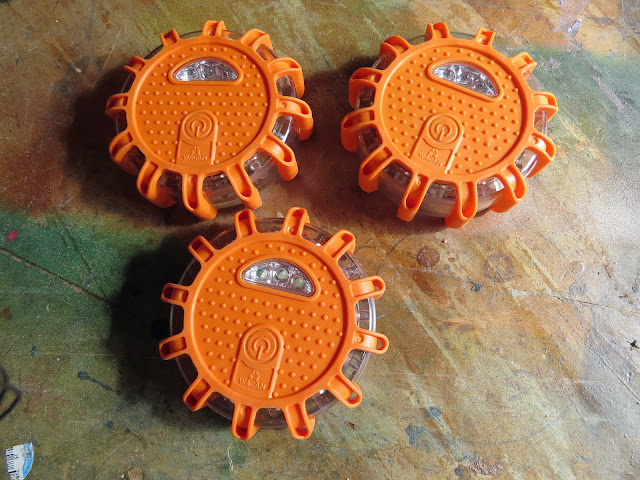 Later I did a little research and eventually ended up with my own set of FRED's to replace those reflective triangles.

Each one of these little battery powered LED dynamos has a white work-light mode (The three LED's on the front.) that can be used as a flashlight and something like 9 different red modes (The ring of red LED's around the edge.) from steady to wig-wag to chasing in circles and even an SOS mode. 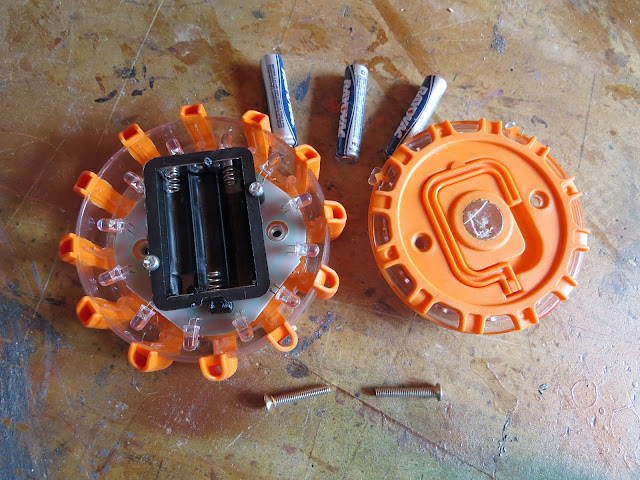 The back of each unit, which is held securely in place with machine screws, no fragile plastic tabs here, has a little hook/stand, similar to a picture frame, that can be pulled out to prop the disk up or hook it on something. I haven't tried propping one up along a roadside but wouldn't be surprised if the blasts of passing trucks knocked it over, but the red LED's are also highly visible when the disk is laying flat, on either the front or back side, it doesn't matter.

The back also has a magnet in it and the first time I saw one of these the driver had just stuck it on the outside back corner of his trailer. The whole thing about setting the traditional triangles out starting some distance back from the disabled vehicle is because they can't be seen until your headlights are close enough to reflect at night or your eyes are close enough to see the triangle during the day, so the extra distance is needed. These little disks can be seen much farther than that, day or night.

I've decided that if I need to deploy them I'll just stick a couple up high directly on the back of the van and, especially helpful if I have to work on the road side of the vehicle, hook the third in the back of my high-vis vest collar. 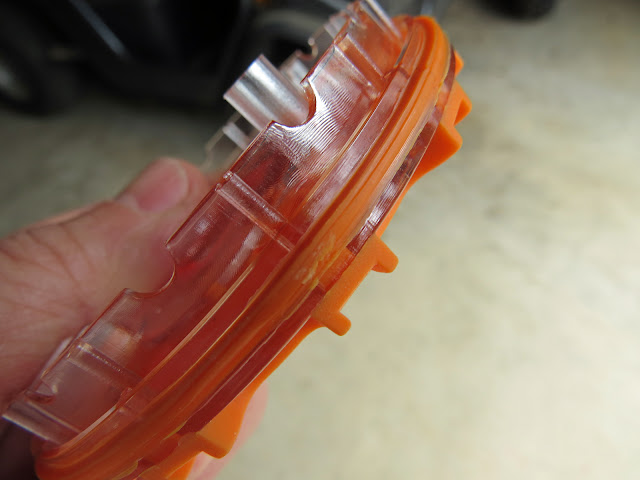 The back of the disk has a gasket to keep the weather and other crap out of the innards, 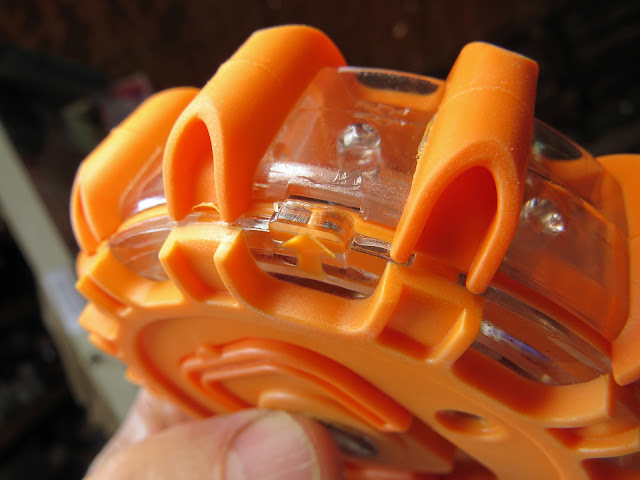 and a couple alignment tabs that also act as pry-points for getting the back off. Speaking of getting the back off, the gasket is tight so don't expect to use a fingernail to pry the back loose (After removing the screws of course!) it's going to take something stronger than that so save yourself the pain and ruined manicure! 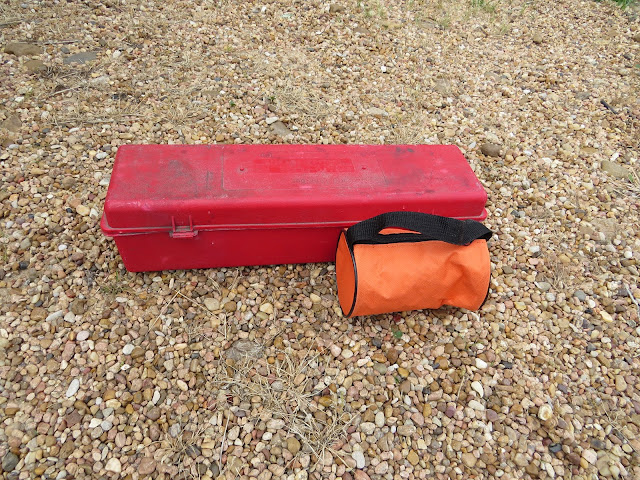 At $40 for a set of three plus carry-case, the FRED's cost about twice what three triangles in a case would, but there are some points (Beyond the greatly improved visibility.) that made the extra cost worthwhile for me.

To start with is size. As you can see, three FRED's take up one heck of a lot less space than three triangles. In fact, pre-FRED, I had to store the triangles under the gaucho along with other oversized stuff.

What you can't see in the photo is the difference in weight. In order to ensure they don't fall over, which, unlike the disks, would render them virtually invisible, the triangles are heavily weighted and my set of three comes in at 17.5 lbs compared to the 1.2 lbs for the set of FRED's. (With batteries.)

And the FRED's are more versatile than the triangles. I said I haven't had to actually use them in a roadside situation yet, but I have thrown a couple up on top of the fence posts to help land the UPS man in the dark. As he approached from the one direction the flashing red lights made the location of our gate visible from two hill-tops away, from the other direction he could see them from a mile away. (A literal mile, not the figurative mile!) 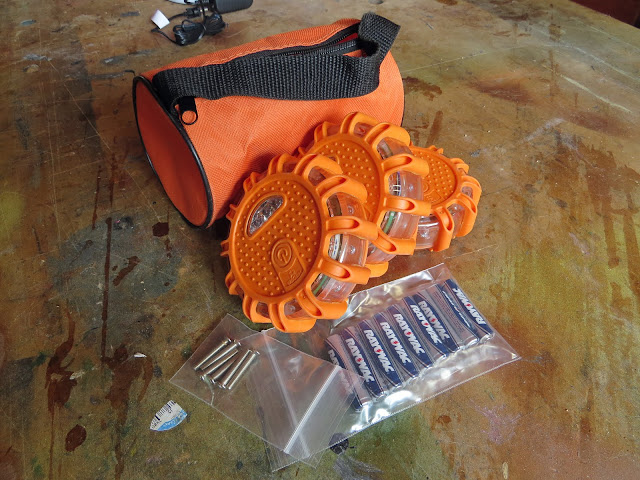 One thing I have discovered, which I'm pretty sure is not a desirable design feature, is that if I leave the batteries installed for about 6 months some unseen parasitic load will suck the juice right out of them. So now I store the batteries and machine screws in the carry-case separate from the disks and only assemble the things when I'm actually using them. An annoyance but one I can live with. (According to the Wagan web site, this is an issue that has been fixed on the current model.)

Despite the claims on the web site, (9 hours) my own testing shows a fresh set of batteries will last more like 6 hours in the double flashing mode. Six hours for LED's doesn't seem very long, especially when I've had LED flashlights run 20 hours or more on a set of batteries, but these LED's are incredibly bright and that takes power. Hopefully 6 hours will be long enough because hours spent stuck roadside are incredibly long, almost as long as sitting in the middle seat crammed between two oversized Americans on a plane! But I carry extra batteries just in case. . . 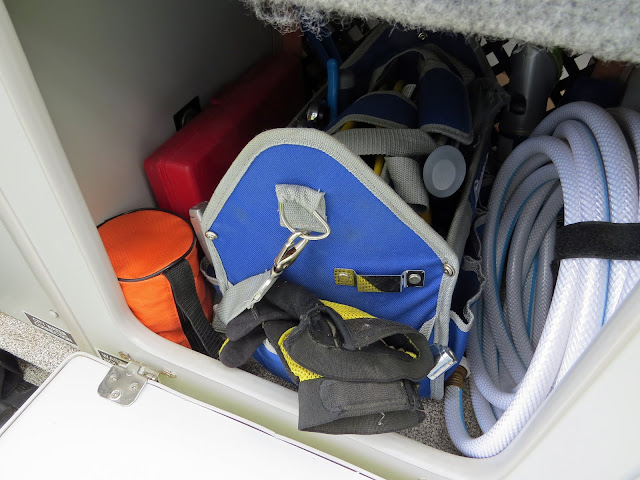 Instead of buried under the gaucho like the triangles were, the FRED's now ride in an easily accessible compartment just inside the sliding side door, along with my water hose, tool bag and tire plug kit.