Souping up the Toad


Some of you may remember me adding a Toad to The Van a few months ago.

Well since then I have had her (the Toad) in the shop for a few snazzy modifications. 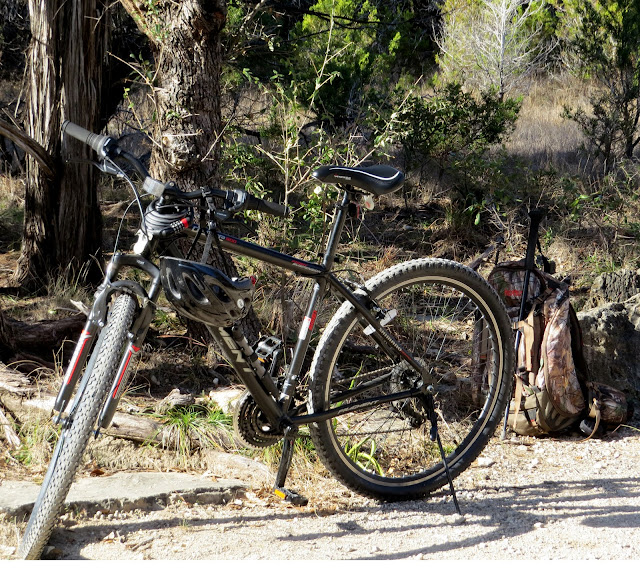 Truth is, my first serious outing with her showed that she was a little on the uncouth side. A lot like riding a quick stepping, hard-edged donkey that had my teeth chattering and legs flopping.

The photo above shows the original setup. A no-frills bike straight out of the box with the addition of a cable lock for hobbling and helmet for crashing. The pack, hiding there in the clutter of the background behind the rear wheel, rode on my back, all 20 lbs. of it.

Like you would expect from donkey, she did the job, but without the least hint of comfort. So I set about turning her into a mule. Stubborn, toothy and ready to throw me at any oportunity, but also able to shoulder the load and do it with a modicum of comfort.

The first thing to address was the seat.


This was my last serious ride. A recumbent by BikeE (A great bike, but they went out of business due to quality control issues after growing to the point of outsourcing manufacturing to China.) Downside is she's a good road bike but not so good, OK, pretty bad, on the trail. She's also a real pain to fit securely onto a carrier. (I had my brother build a custom carrier for me to make it work but it was vehicle specific and that vehicle is long gone.)


One of the recumbent's greatest assets is the seat. (Get it? Seat - asset?!) It's like riding in a recliner. A stark contrast to the factory offering on the new Toad!

I mean I'm pretty open to adventure and new experiences, but damn! No dinner, no movie, not even a quiet walk under the stars first! That seat just jumped out of some dark alley and violated me without so much as a 'by your leave'!!! 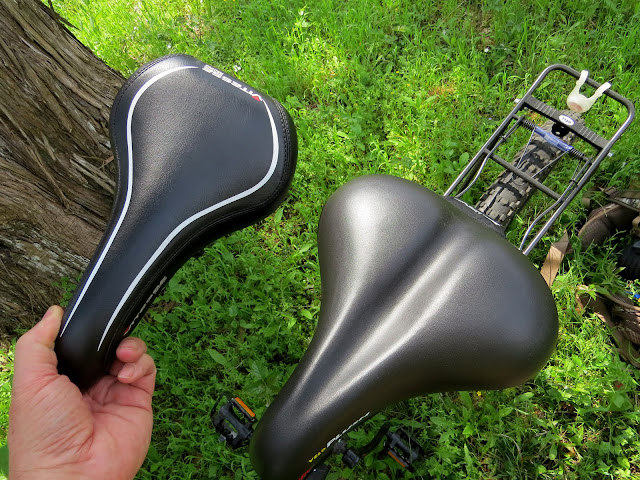 I know, I know, putting a cruiser seat on a mountain bike is like putting pink boots on a cowboy. Well too bad. The Toad's just going to have to grow a thick skin because this seat romances me instead of the near rape of the original. 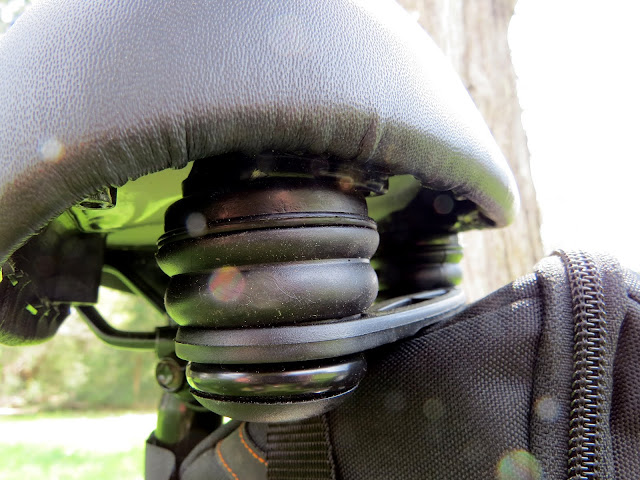 In part because of the high-tech urethane suspension. 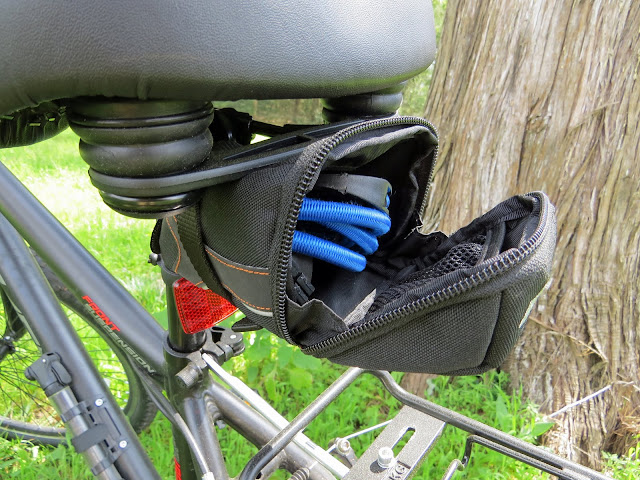 I'm also all about simplicity in my life. For instance, instead of moving little things like first aid kit, fire starter, compass, etc from pack to life-jacket and back to pack when switching from hiking to kayaking to hiking, I keep each fully stocked with their own dedicated gear, ready to pull down off the shelf and go with a minimum of fuss.

Along those lines, in order to keep from having to remember to stuff things like tire tools and patches in my pockets when taking to the Toad I added a seat wedge so all that stuff, including a dedicated bungee, is right there all the time. 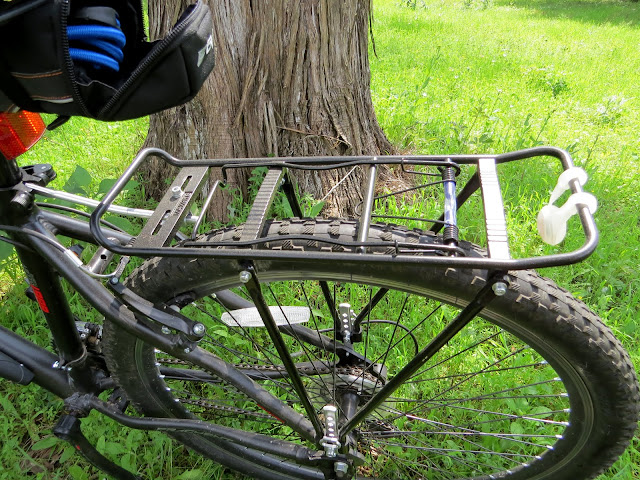 But second only to the seat in significance, was adding a rear carrier to the bike (Another $30 investment at the big box store.) so I could get the monkey - I mean the pack - off my back.

I could have tried one of the new carriers that cantilevers off a single clamp on the seat-post for about the same price but I went old school because that way the weight of the pack is transferred directly down to the rear axle. Besides, according to the packaging, my 20 lb pack maxed out the capacity of both styles of carrier and the old-school version just looks better able to deal with any excess stresses. 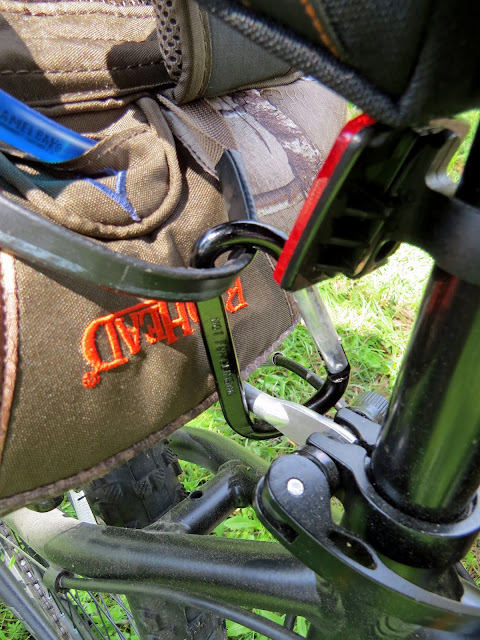 Now  I just throw the pack on the carrier, clip the handy carabiner that's always attached to the pack's carry loop around the front strut of the carrier so the pack stays put there all neatly tucked up under the seat, 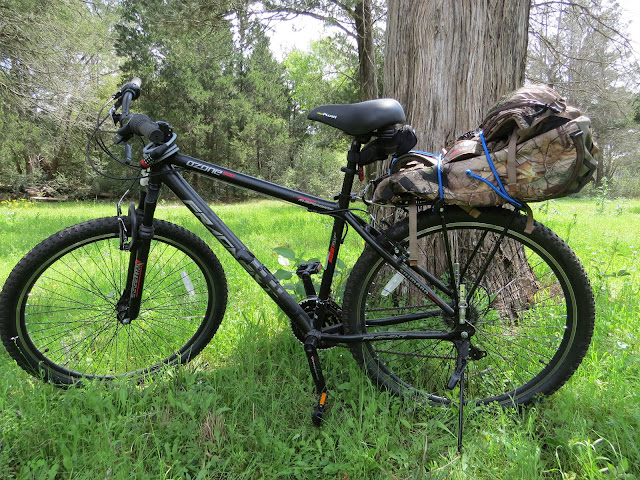 strap it down with my handy-dandy adjustable bungee (An invention right up there with sliced bread.) and I'm ready for a semi-civilized trip to the trail-head.

Even with the customization I still only have about $220 invested in the Toad. She's not flashy and won't compete with the big boys that can cost 5 times that, but, though I'll be pissed, I won't be devastated if someone decides they deserve her more than me and walks off with her.

In the meantime, she and I have plans so let's roll those wheels. . .