Umm, Well That's Interesting - In a Sucky Kind of Way!!


Just a few hours ago I'm at the Lincoln National Forest, Sacremento Mountains Ranger District Headquarters and I distinctly remember the conversation going something like this:

Me: Hi, first time here and I'm interesting in day-hikes and camping

Ranger Dude: OK, these are some hikes I would recommend (Pulls a collection of copier sheets out of the cubbies behind him.) and this (Whips out a couple of stapled-together sheets from under the counter.) gives you information on our campgrounds, all of which are within four miles of Cloudcroft.

Of course my recollection may be suspect since I've only recently stumbled back to The Van after sucking ineffectually at the vacuum of 9000 feet on the Osha Trail.

I got The Van unlocked. That was easy. Just fumble around in my pocket, oops; not that one, the other one, you know, the one where you always keep it; and push the little button on the fob; oh yeah, I seem to vaguely recall that you have to push the button twice to unlock the side door.

Getting the side door slid open wasn't quite so easy as getting it unlocked. Just when did this thing get so heavy?! And I sure don't remember having to push it this far to get it to latch open. Good thing I was hanging onto the handle because my legs sure weren't cooperating all that well and getting back up off the ground with this pack on my back - well - that just might not happen!

I may, just possibly might have, zoned out there for a minute because I was sitting on the gaucho in The Van with the side-door wide open and the campground list/map in my hands with no solid recollection of getting the pack off and my gear put away, although I must have. (I checked) 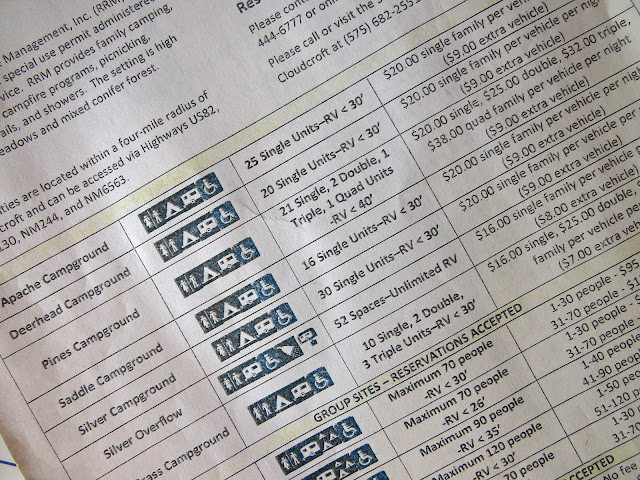 Boy! the campsites up here are a touch pricey, but that's OK because with my geezer-card half-off discount the site will cost me, umm, let's see, 2 goes into 20 how many time?, (Now am I supposed to carry the 1??) oh yeah, $10. 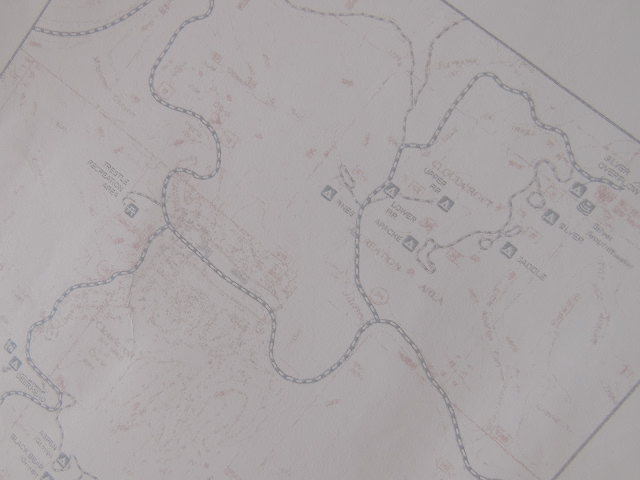 Now where am I going to camp tonight?

No, wait. Whew! Just a bad copy of the campgrounds map. They really need more ink in that machine!

Anyway, yes, there's Pines campground just around the corner. Looks as good as any of them.

Now all I have to do is drive over there, and to do that I need to slide the side door shut. (grunt - groan - and grunt again) OK, I can't seem to get up enough oomph to close it all the way. Maybe I should just kick back here for a few minutes and gather my strength first. (Ahh, where has my youth gone??)

After a short recovery I successfully get the door closed (I think about doing my happy-dance but there isn't enough air.) and drive over to Pines campground, (Too bad I too don't come equipped with a turbocharger to cram air down my throat like The Van!) only to find the gates closed and locked.

Hum. that's interesting! And disappointing. Here I had allowed myself to think my day's journey was just about over. Maybe there aren't enough campers out yet to warrant opening all the campgrounds. If I drive just a little farther along and hang a right there's a line of 4 campgrounds all stung out along the same forest road so I'll just go over there and find a spot.

Except that road is gated and locked too.  What the hell! 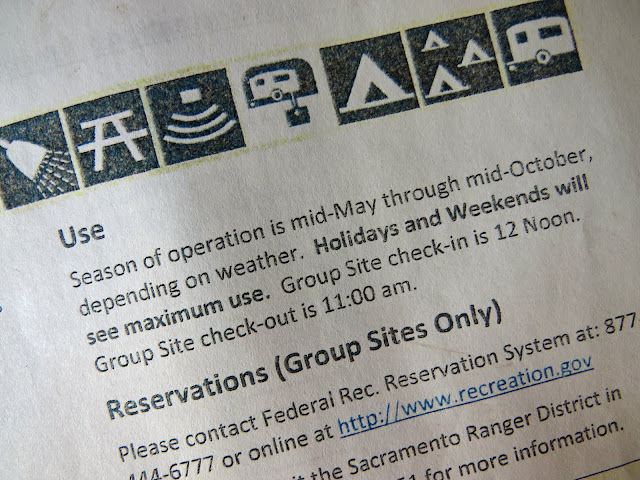 It isn't until I'm sitting there nosed up to a locked gate, trying to make sense of the official campground handout I had just been given that I finally notice this section up in the corner of page one.

Now I may still be slightly loopy here from oxygen deprivation, but this being early April, and mid May over a month away and you'd think Ranger-Dude might have mentioned that little detail when I asked about camping in his territory!!


Fortunately, while I had a strong signal back there in Artisia (Here near Cloudcroft I had one bar of 1x service) I had downloaded the MVUM for the area and now I see that FR 568 is just back down the road a little ways and dispersed camping is allowed along it. 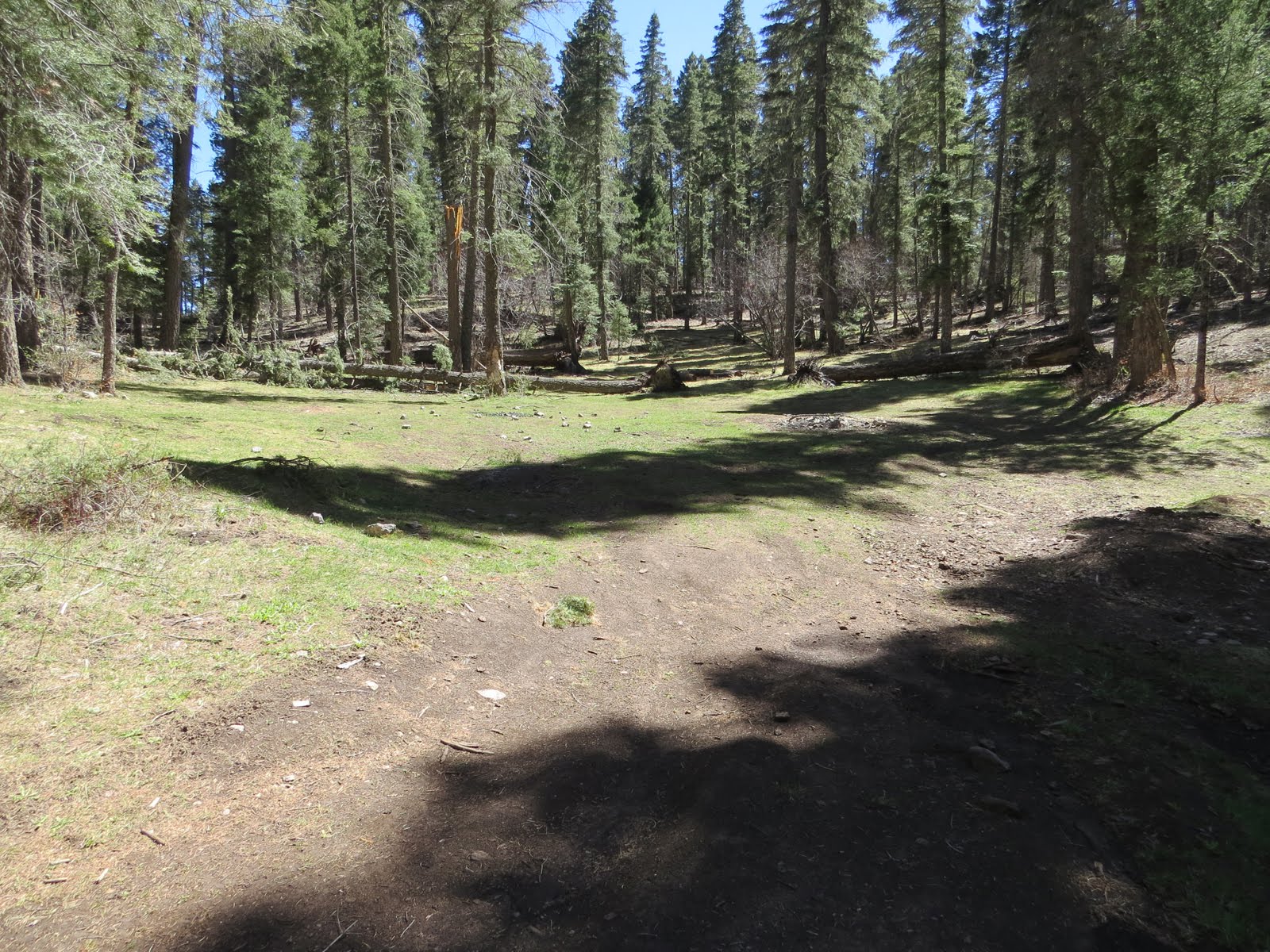 At first 568 wasn't too bad, in fact medium sized class C's or modest trailers behind strong trucks could make it up this first section with little problem, 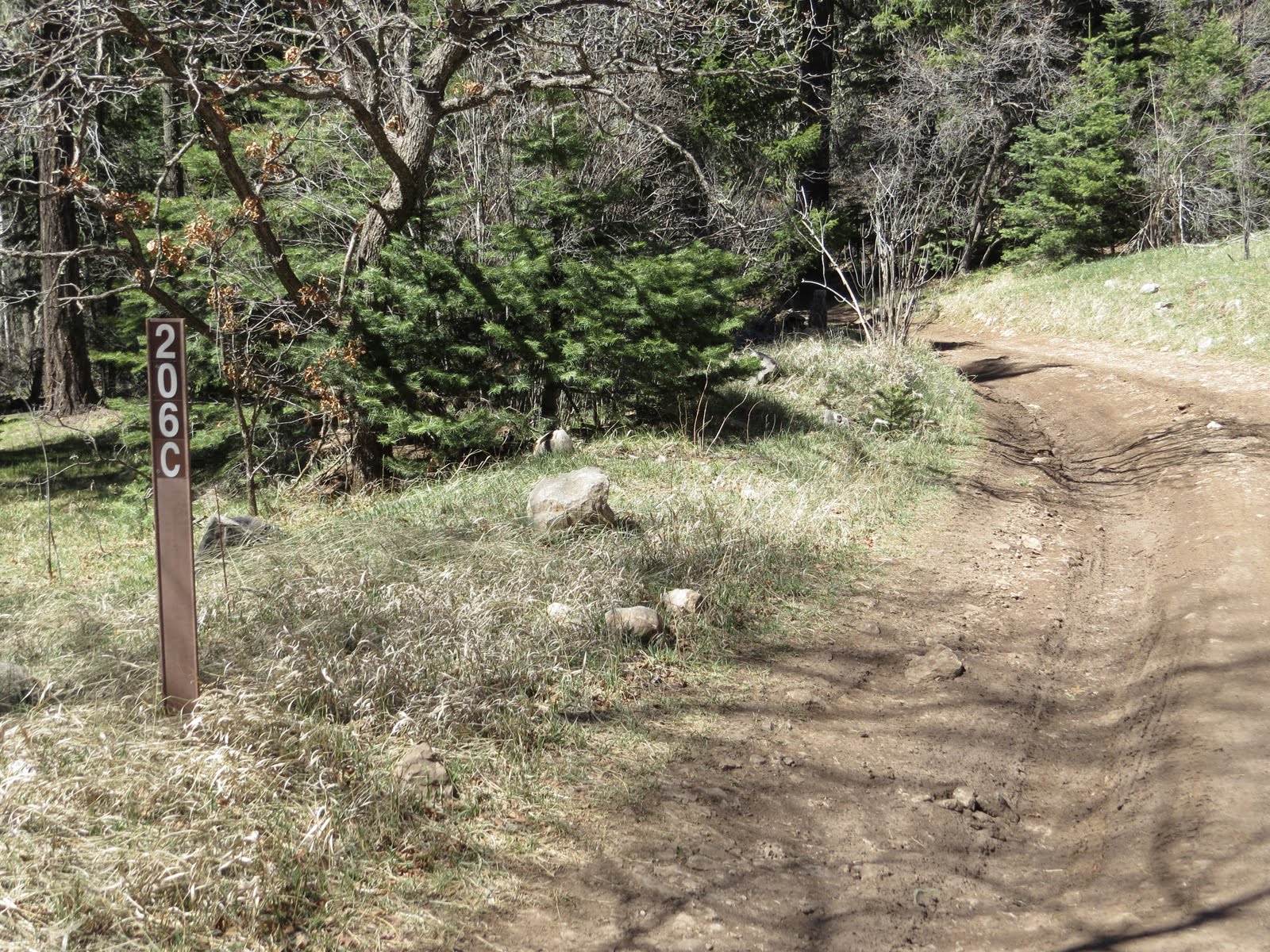 but then I came to the junction of 206C and both roads started to look a little rougher. 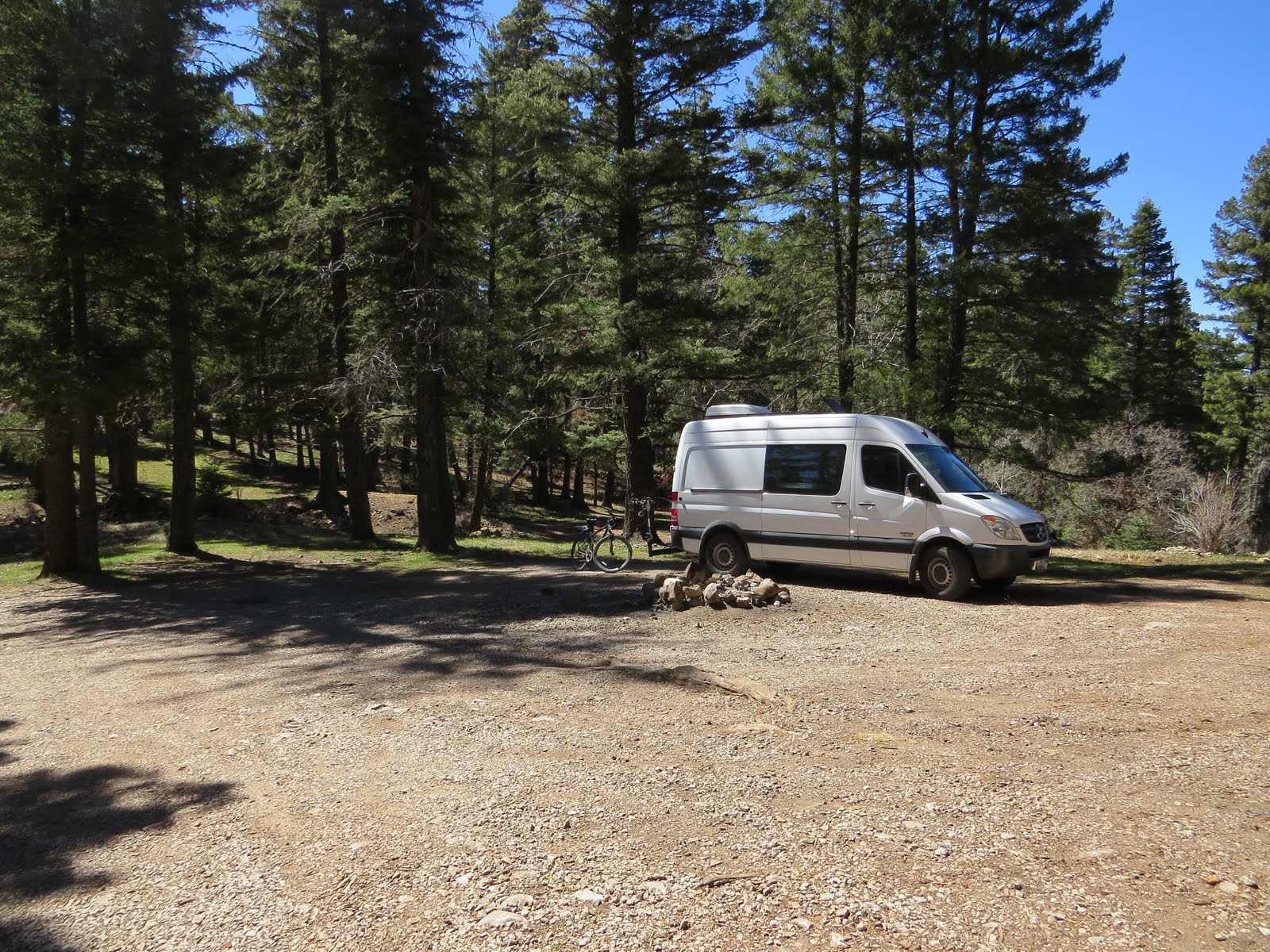 So I pulled into what looked like a large 'party' site just above the junction and almost still within sight of the state road below, and broke out the Quad-B to do a little scouting before committing The Van to the unknown. 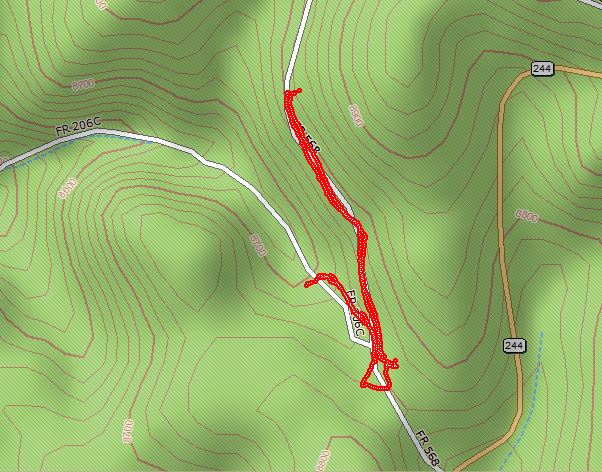 It was sound reasoning and a noble thought, but one that completely ignored my afternoon encounter with dame altitude, that nasty bitch!

After painfully walking the Quad-B about a mile up, and I do mean up, 568 (I tried riding, for all of about 20 feet, but the grade stopped my wobbly legs dead and threatened to send me all the way back down to Artisia! Backwards!!) and deciding that The Van could get up here with little problem, but finding only one spot where I could get off the road, though not by much. I turned around and coasted the Quad-B back down the hill, riding the brakes the whole way in an attempt to avoid turning up as a small paragraph on page three of the local paper. (Spectacular Crash on Mountain Cut's One Man's Retirement Short!)

I'm not convinced that downhill 'freebie' made pushing some 40 pounds of bike and gear up the hill in the first place worth it, but too late now.


At this point it was already getting well on into Monday evening and there was a pretty good chance I would remain the only person out here in this corner of the woods, party spot or not, so I decided that where I was already parked would be camp.

A chilly camp as it turned out, but camp none-the-less.

As the outside temps headed south of 40 degrees that evening I pulled out my 4000 BTU Mr. Heater  and twisted a fresh bottle of propane onto it. (It also has a 9000 BTU setting but inside The Van even 4000 is too much and I have to run it on Low for a while then turn it to Pilot for a while, so I never use the 9000 setting.)

Now the literature on these things warn of not working a high altitude and sure enough, I wasn't able to keep the pilot lit. When nourished by a lighter the flame would dance and hiss a good quarter inch away from the pilot tube then go out as soon as I removed the outside flame.

I knew what the problem was. These things claim to be regulated at 11 inches but in my experience the lower the level in the propane bottle the lower the vigor of the pilot flame and eventually it will stop blowing itself right off the pilot tube in the vacuum of high-altitude. In the past I've gotten around the issue by using the partially depleted bottle from my stove instead of a fresh one with too much oomph.. Only thing is, just this morning I emptied the stove bottle so all I had with me were full bottles. . .

Oh well. I never leave the heater running when I'm asleep anyway and it's getting late, (OK, so in actuality it was just a little past 8 PM, but a side effect of my battle with dame altitude was to greatly modify my conception of late.) so I'll just crawl under my blankets, both the fleece and wool, (it never got cold enough to have to add the sleeping bag to the pile too) and read for a while.

Actually it turned out that before I got much of any reading done I fell asleep to the sound of breeze in the treetops up there on my solitary mountainside, and nothing interrupted me again until dawn, not even a middle-of-the-night-pee-dash. (As you get older you celebrate those pee-free nights! (And you really celebrate those nights when you dream about pee'ing, wake up in a panic, gingerly pat the bedding around your - you know, - middle zone, and discover the sheets are blissfully pee-free!)) 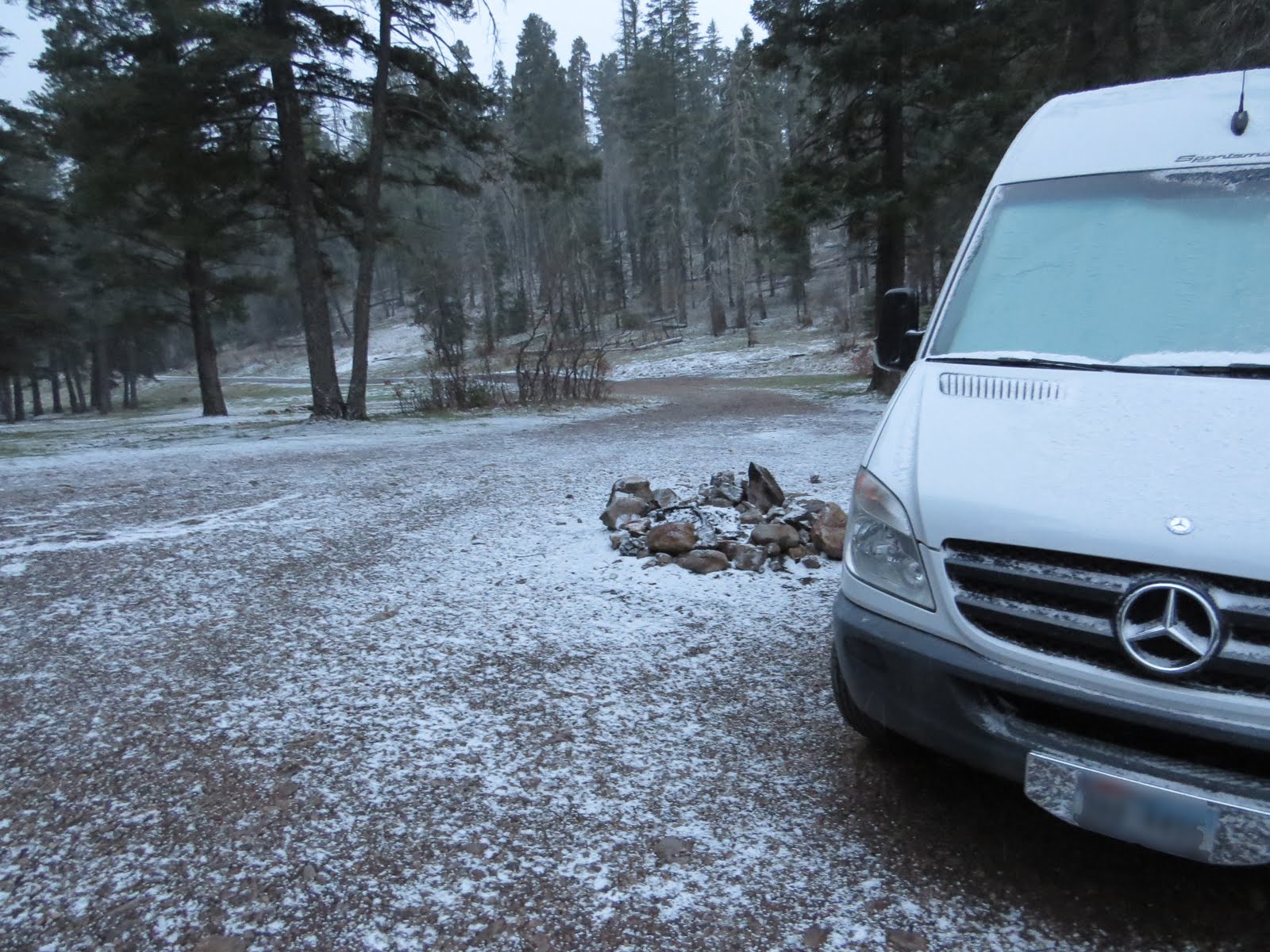 Oh cool! It's snowing this morning!!

Oh Crap!! It's snowing this morning and I'm halfway up a mountain on a deserted dirt road!