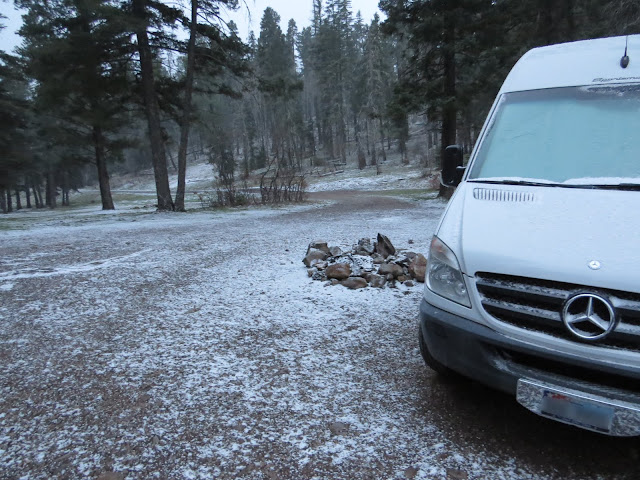 I closed my last post with this photo of me getting snowed on while halfway up a mountain on a dirt road, but truth is, there was no drama involved beyond the alarming scenarios I conjured up in my own head.

To make sure of that, the no drama part, since I don't really know how much it plans on snowing, or if the ground around here will turn to snot-slick gumbo when this starts to melt; as soon as I got my pants on and the window-shades stowed, (Not necessarily in that order, but hey, nobody said you had to look!) I eased on down the hill and finished my morning routine in the safety of a pull-out down there on the well-maintained State Road.

Yesterday, on my way to the Osha Trail I passed the entrance to the Trestle Recreation Area and noticed that the gates were closed and locked. Now I knew why, me being here a little too early in the season and all, but I had also noticed a small parking area right at the corner of US 82 and SR 130. From here a short trail, the Village Spur, goes up over the hill and gives access to the handful of trails that start from the Recreation Area.

I also noticed that this tiny little parking area was jam-packed with vehicles shoehorned into every available corner, as well as some corners that aren't really available.

But when I got there this morning the parking area was deserted.

Either no one in their right mind would be out on this cold and very windy morning, or I just got there first. I'd like to think it was the second but evidence suggests it was the first.

Bearing in mind what the parking area looked like yesterday I carefully positioned The Van in such a way that she couldn't be blocked in then, bundled up in two shirts, one lined jacket, two pairs of socks, a knit scull-cap under my straw hat and two pairs of gloves, hoping dame altitude wasn't yet finished with her morning ablutions so I could avoid her attention for a while, I trudged on up the hill to see what's on the other side. 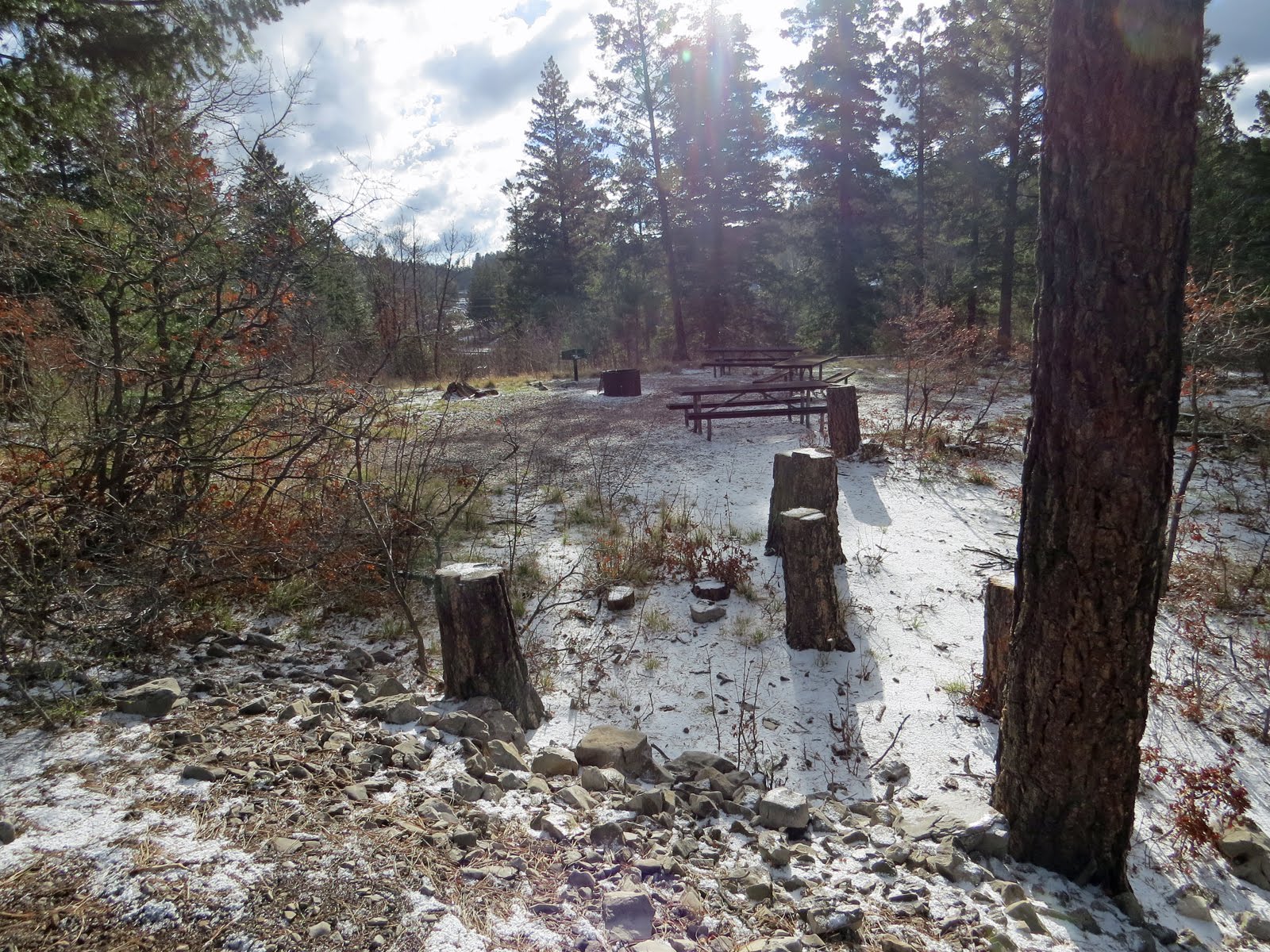 Nestled there in the trees around a loop parking area that I'm sure is popular once the gates are unlocked, is a pretty little picnic area that was very inviting even given the current climatory conditions. (I know, not a real word, but I like it anyway and this is my blog dammit.) 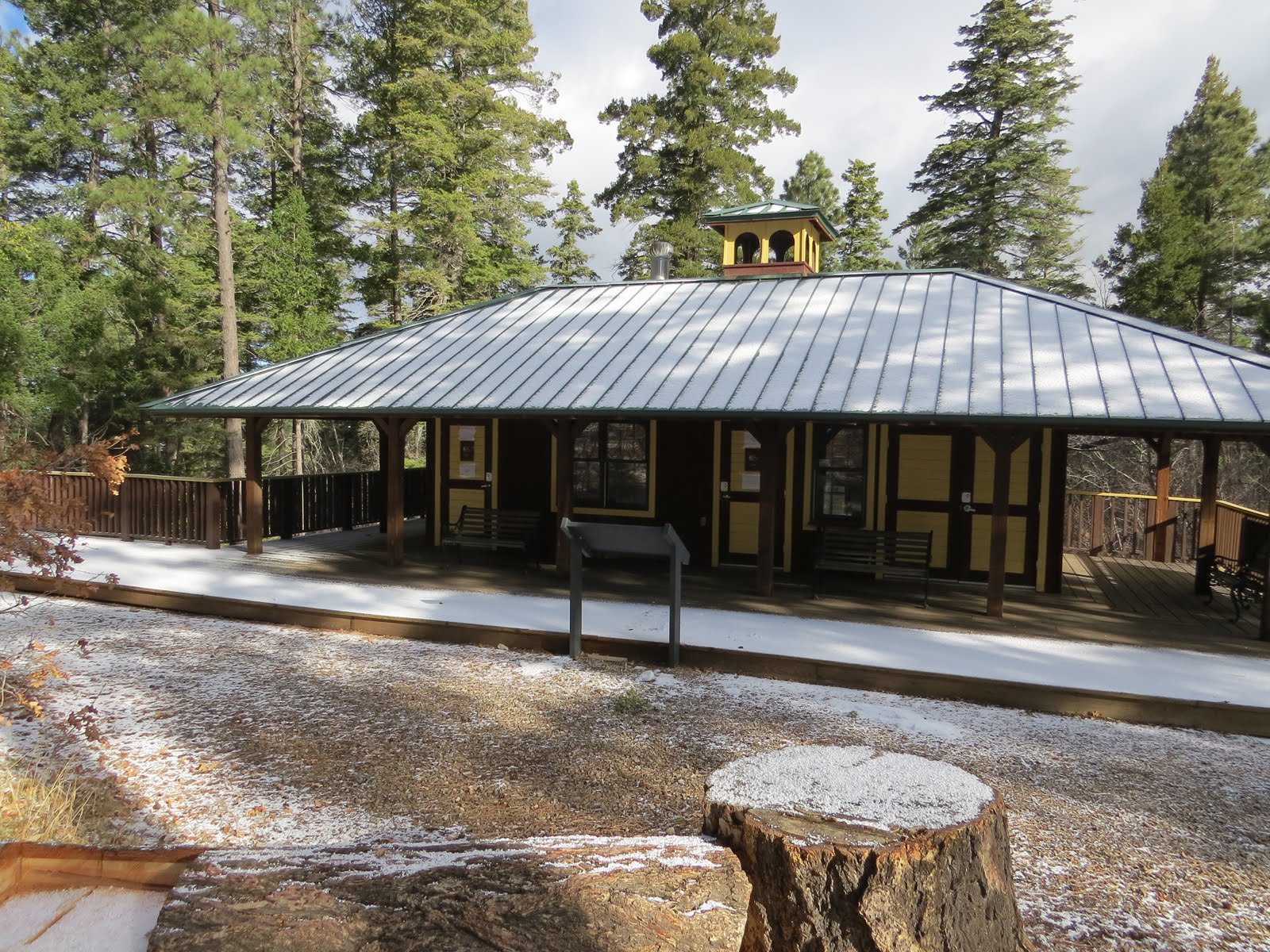 Nearby sits this replica of the Cloudcroft railroad station, though paper signs posted on the doors informed me that the bathrooms weren't scheduled to open until Easter Weekend. 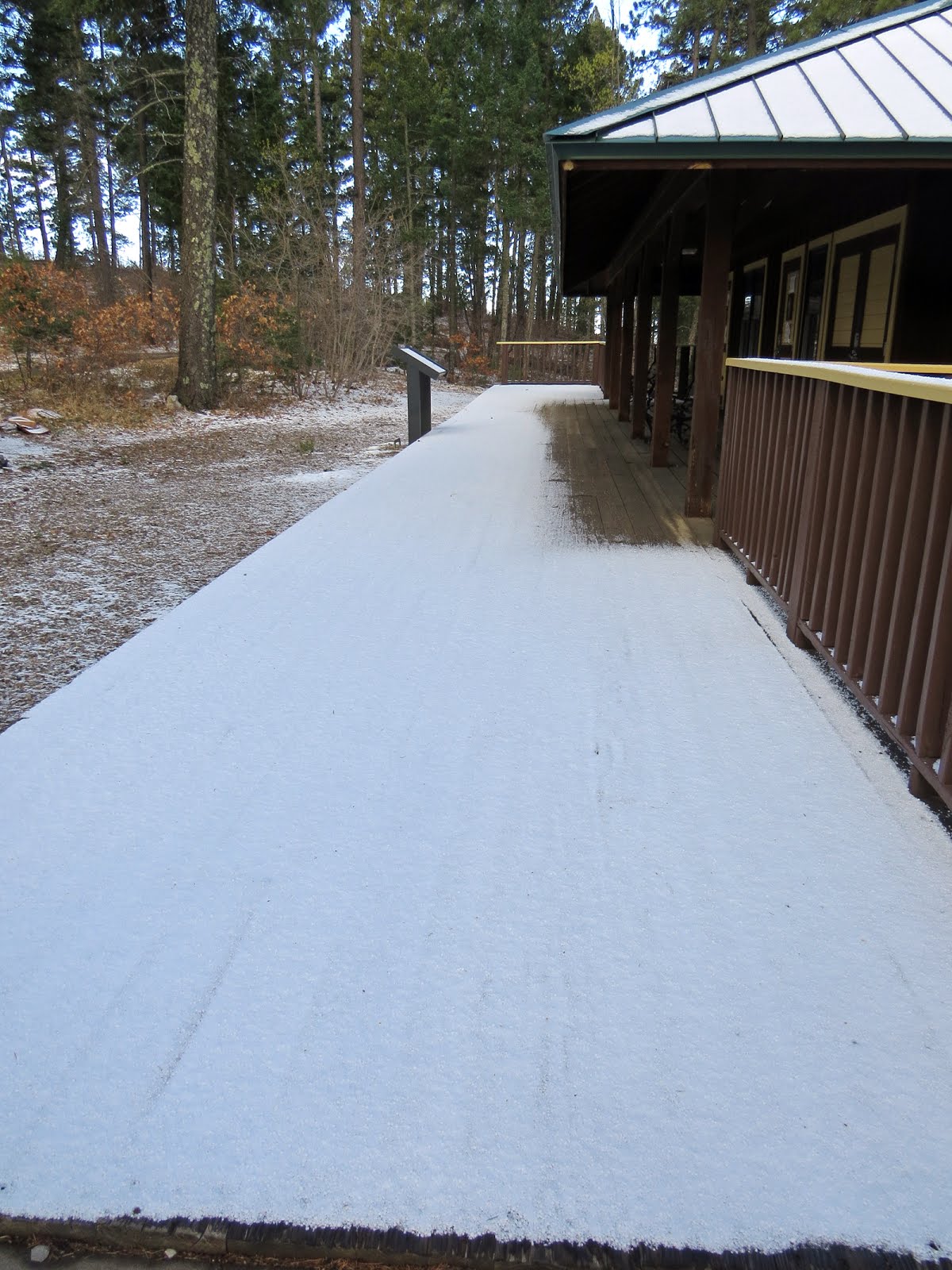 The unblemished snow on the deck was clear evidence that I was the first there this morning, and in fact the only one there right up until I left the area again.

Of course the railroad, which ran their last train up the mountain in 1947, is the star attraction here. and that's where the trails are focused. Just my kind of place!! 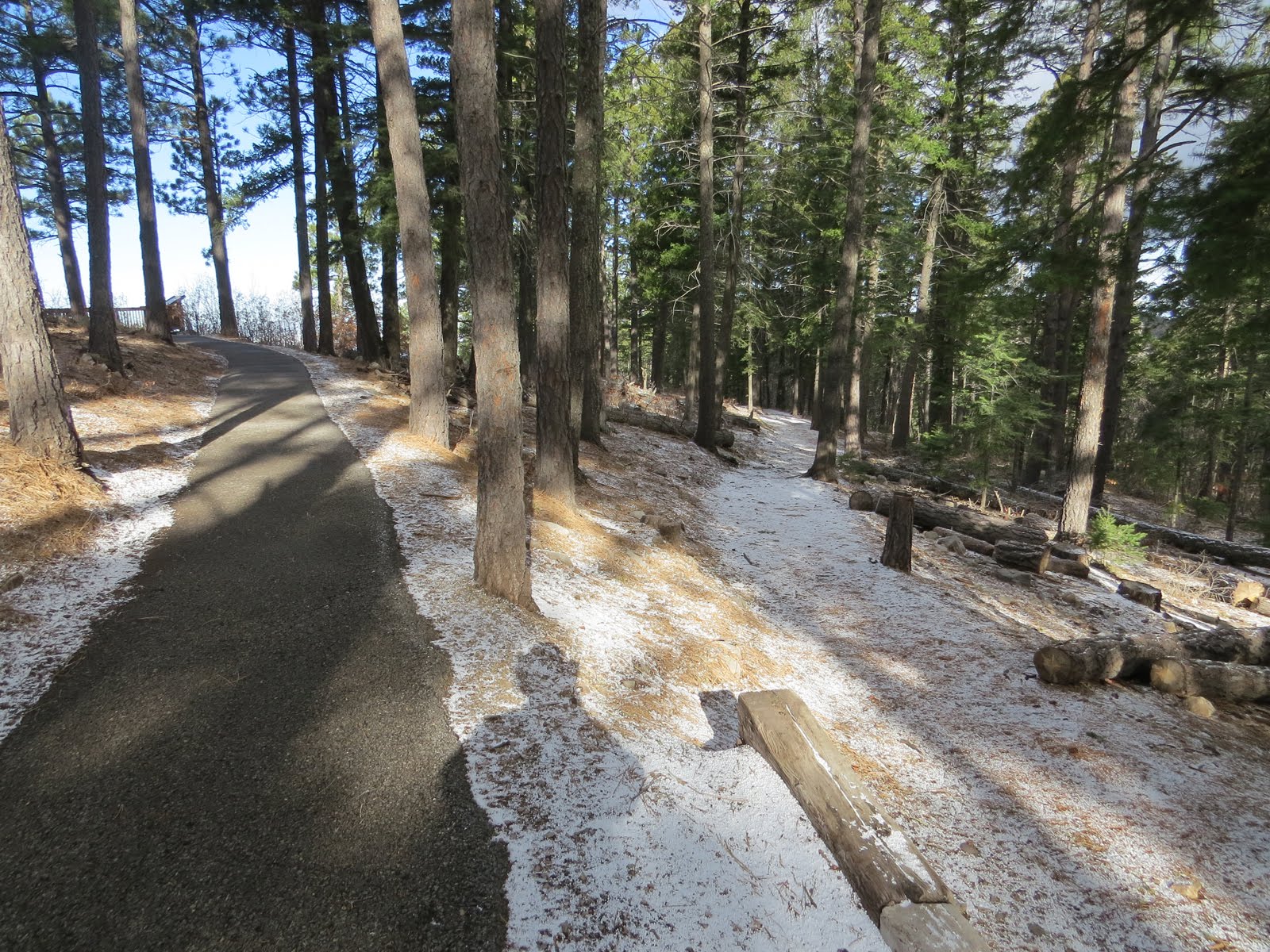 Here, with my shadow trapped indecisively between the short, paved trail to the overlook and the descending Cloud-Climbing Trestle Trail (T5001) I made the mistake of heading on up to the overlook for a look-see before tackling the real trail. 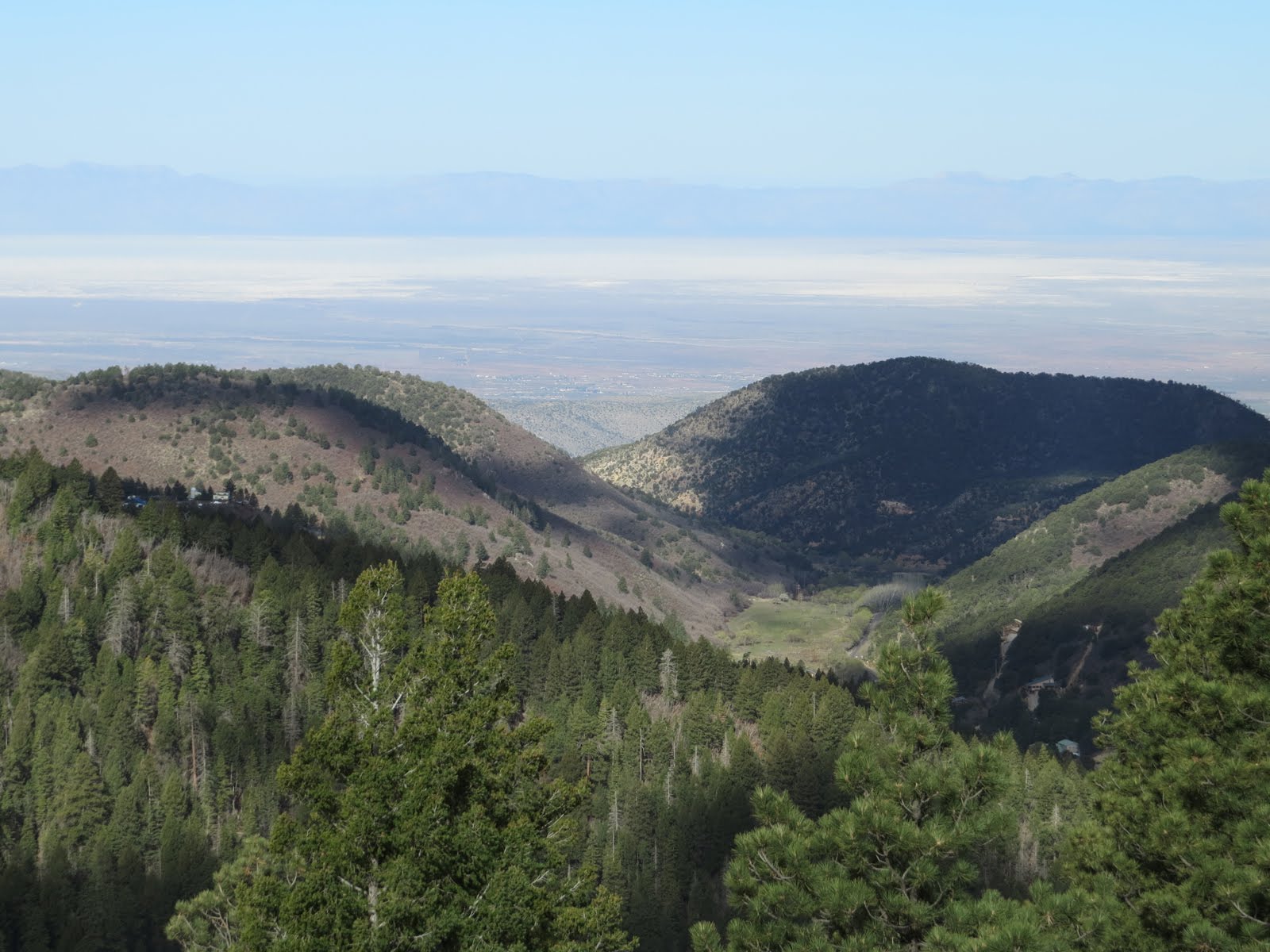 This photo from the overlook down into the Tularosa Basin does nothing to show the icy and fiercely aggressive wind roaring up the canyon which threatened to strip the pack right off my back (My ears didn't flap but only because they were secured under a knit skull-cap.) as I leaned further and further into it trying to keep my feet under me but also attached to the ground. Even the Flying Nun would have crashed and burned in this wind! But she probably wouldn't have felt anything because it was also numbingly cold! 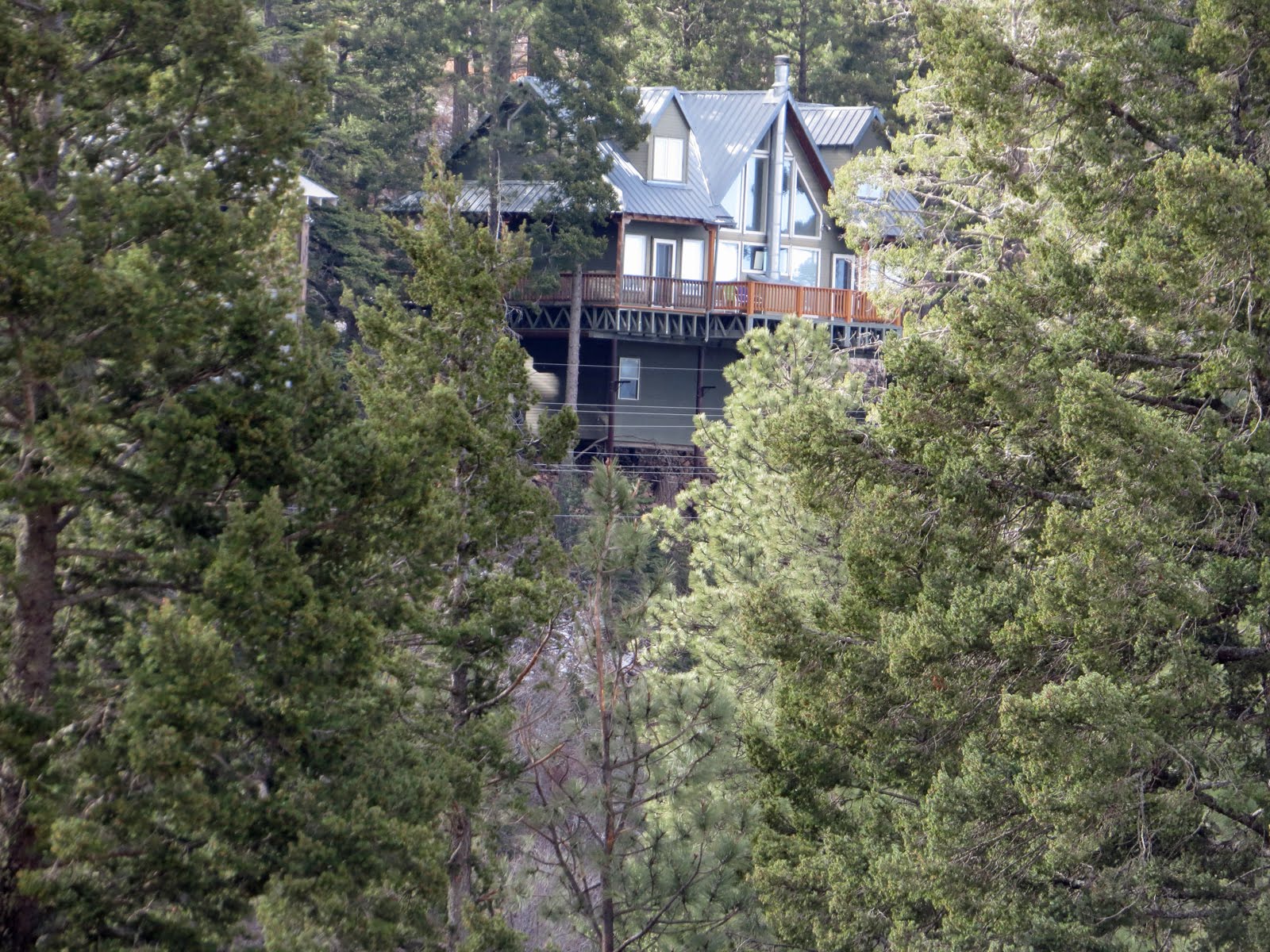 I have to admit that at this point I had a smug little chuckle thinking that those people that built their stilted houses right on the cliff-edge there along SR 130 about a half mile behind me deserved every little draft that was blowing through the walls right about now.

But I also have to admit that I, frozen digits, numb nose, nipped ears and all, was having serious 4th, 5th and 6th thoughts (I was way past second thoughts by now.) about the wisdom of attempting any serious hiking in these conditions.

The temperature would have been tolerable, but throw in the winds and hiking was making less and less sense. (They actually have an acknowledged windy season here that adversely affects the pilot training at nearby Holloman Air Force base, and that season is now!) Oh hell, who am I kidding! Forget about hiking, just standing around outside out here didn't make any sense at all, even to me. 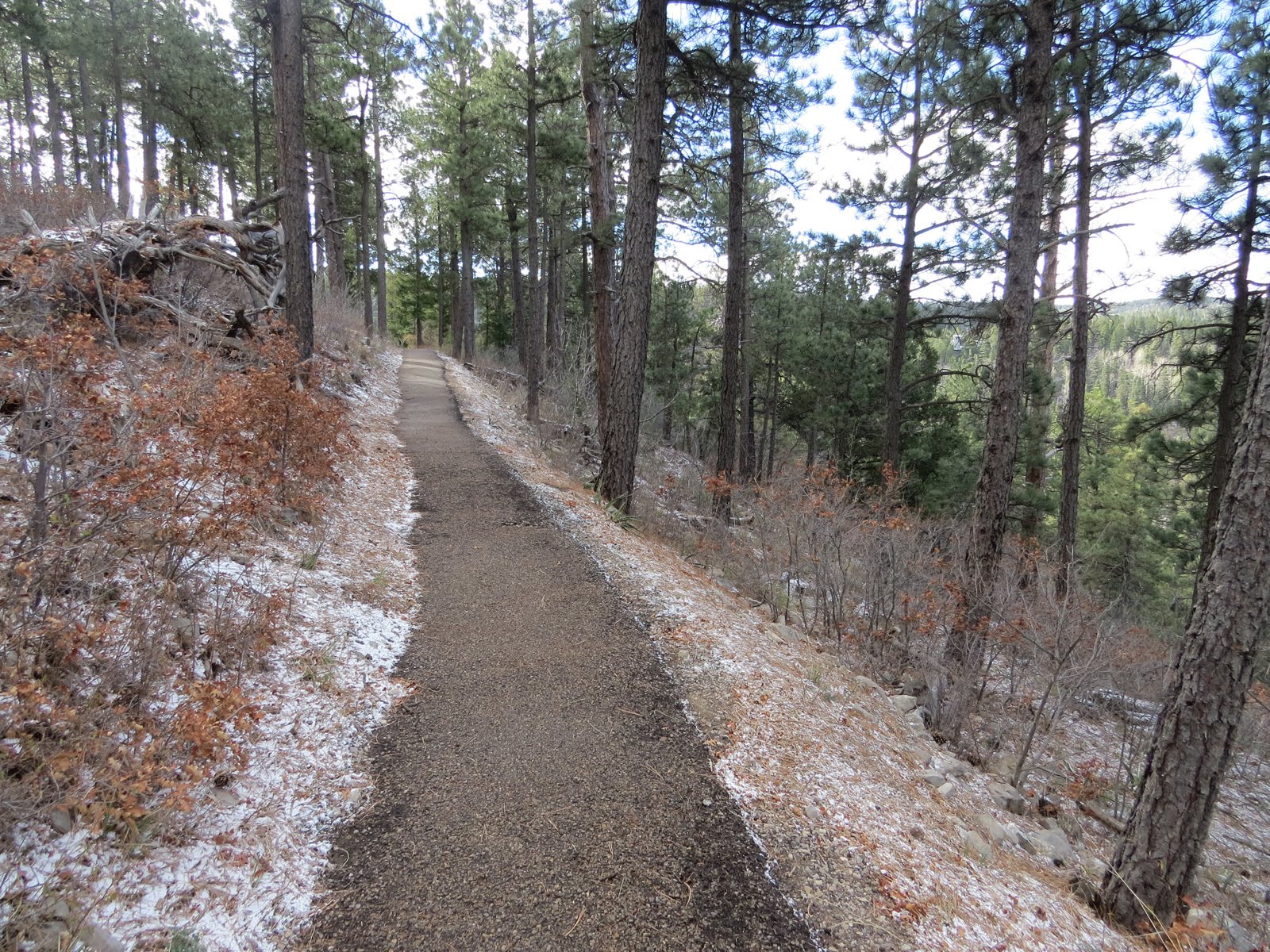 Decision made, as I retreated in the face of this blustery rebuff, I took the other leg of the overlook trail back towards the Recreation Area in the hopes that the slope to my left, the windward side, would shelter me from some of the wind.

On the bright side, my truncated hike didn't require enough effort to let dame altitude get her claws into me all over again this morning!!

This is why it was still fairly early in the morning when I found myself drifting on down the highway towards Alamogordo, The Van leaning on low gears to keep the speed in check during the 14 mile 6% decent, since I wasn't interested, in the least, in trying out either one of the two runaway ramps on the way down.

I wasn't scheduled to meet up with The Daughter until after she got off work that evening but I figured I could find something to occupy myself down there on the basin floor for the rest of the day, especially since Alamogordo runs a good 20 degrees warmer than Cloudcroft.

But a word of warning to all those that take a look on-line and decide there's a number of things to check out in Alamogordo while they smugly wait for the workday to wind down and the working stiffs to be released back out into the world; the New Mexico Museum of Space History, the Toy Train Depot, and even the zoo, are all collectively closed on Monday and Tuesday. (Guess what day this was!!)