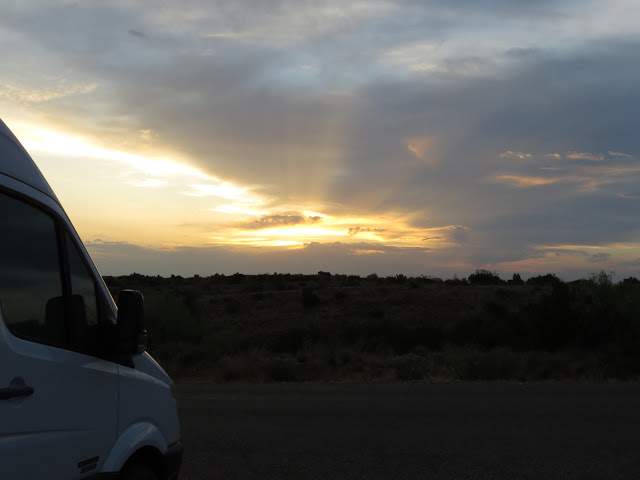 Another early start was called for because this afternoon wasn’t going to be any cooler than yesterday’s was, which was HOT. I know it was HOT because sometime around 1530 the thermometers in The Van, both indoor and outdoor, clicked over from 104 to H which stands for HOT!

With a good stiff breeze and the relative humidity hanging around the 12% mark it wasn’t intolerable, but still, best to get the activities underway while things are still relatively cool. 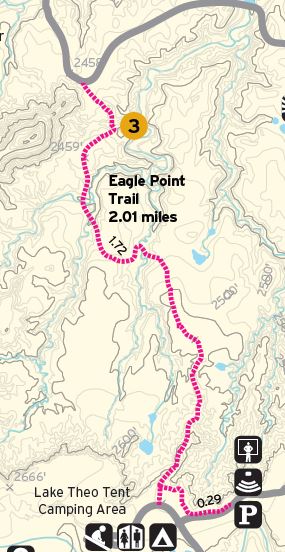 And today’s planned activity is to hike the Eagle Point Trail.


I can’t say for sure because unfortunately this sort of history doesn’t very often make its way into brochures and info-plaques, but after studying the terrain and the trail I’m pretty sure that the Eagle Point Trail follows an old foot-trail used by the original inhabitants to get from the canyon rim down to the watersheds of what we now call the north and south prongs of the Little Red River. And that foot trail was probably loosely based on game trails cut by early bison traveling from the grasses on the rim to the spotty water in the rivers below. (Lake Theo up there on the rim didn't exists until recently) Most likely the foot-trail was later widened into a crude wagon-route by early ranchers of the area and today the trail is still about a wagon’s width across so it can be easily patrolled by a 4-wheeler and maintained by a small tractor with front-end-loader. 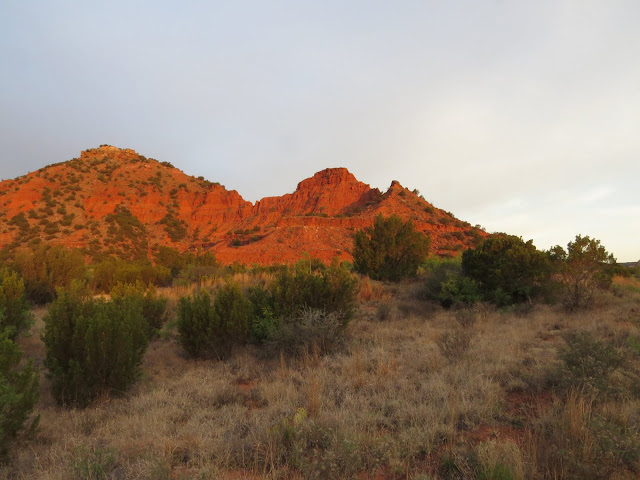 The lower end of the trail (the north end) is aimed at the terminus of a ridge, a spot now called Eagle Point.

Rounding the end of the ridge and turning west gives access to the canyon of the South Prong while continuing on north leads to the North Prong. 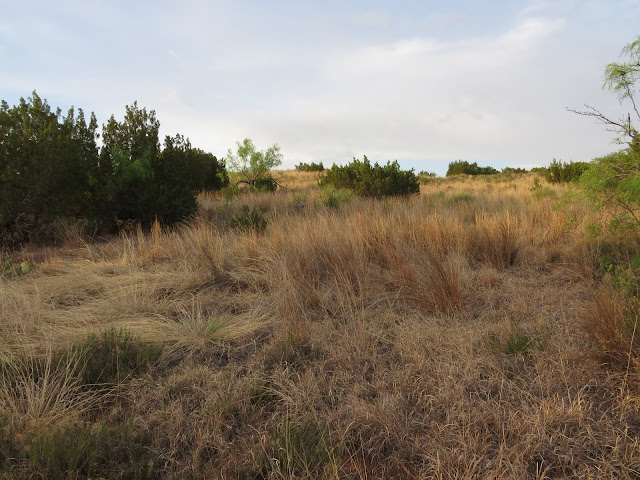 The trail traverses a mix of gentle mini-meadows 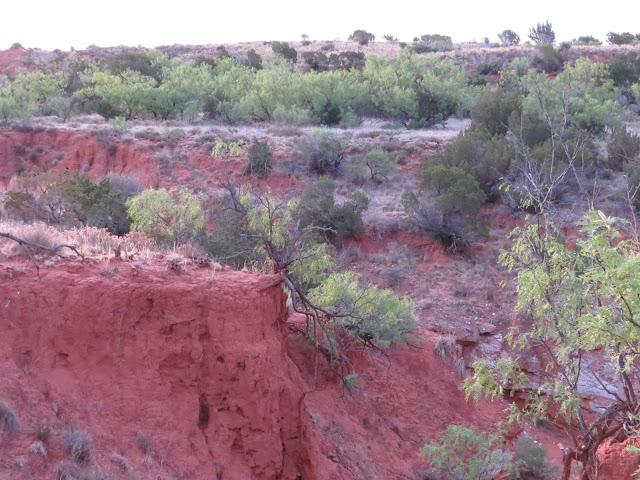 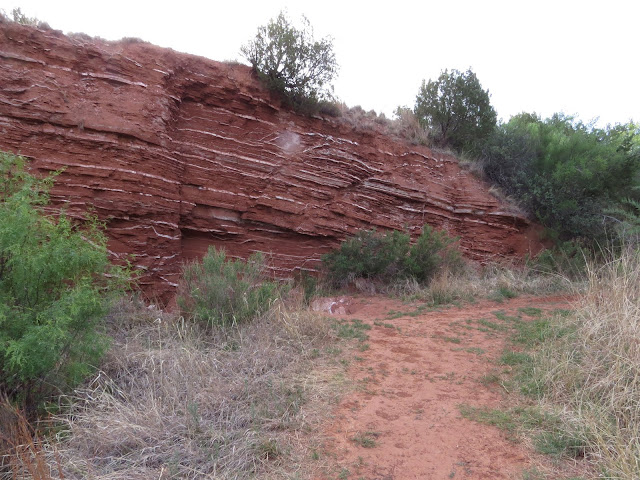 in some places worn sharply away along the watersheds to expose the layers of gypsum laid down so long ago. 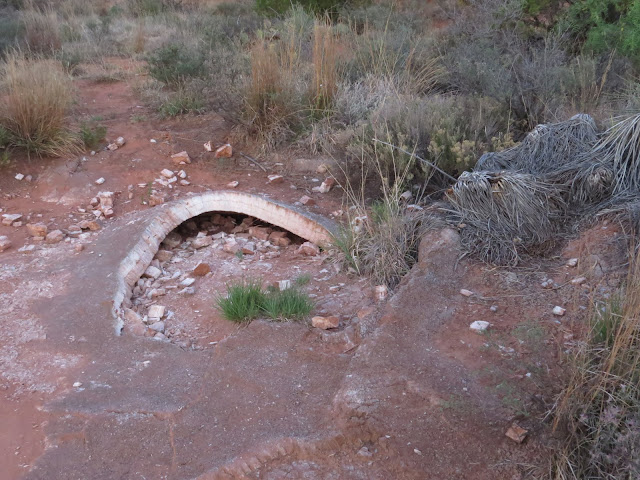 Once in a while the gypsum layers ‘bubble’, creating these miniature domes.

Despite being asked to stay off the fragile structures some people have the impulse control of a teenager in heat and no consideration for others, let alone Mother Earth, so can’t resist stomping on them, just because they can. 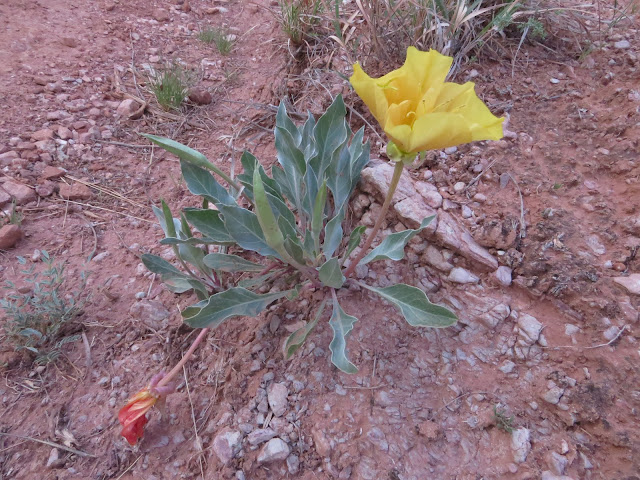 There were loads of these little plants out there with large yellow blossoms that look more like they belong on a garden squash rather than an arid, rocky-area plant. 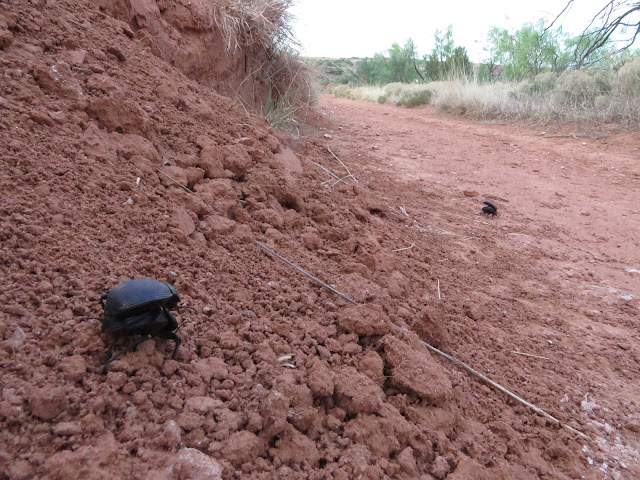 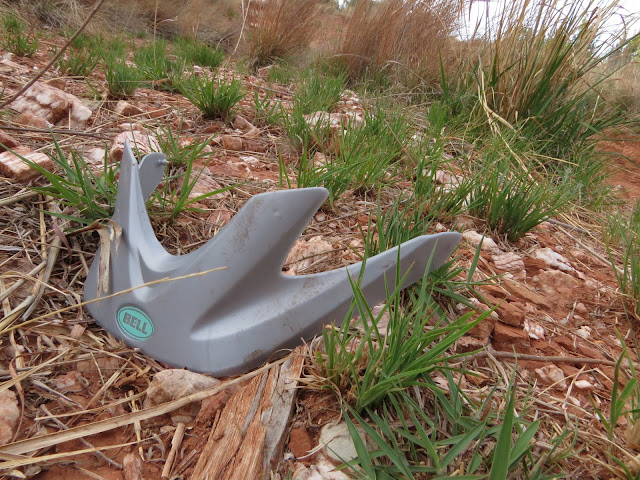 As testament to the ruggedness of this trail, a bike-helmet visor had been ripped off in some, hopefully not too dire, event and left behind.

It was too big for the little ‘other people’s butts and power-bar wrappers’ pocket in the waist-band of my pack so I moved it to a more prominent place alongside the trail to be picked up on my return trip. 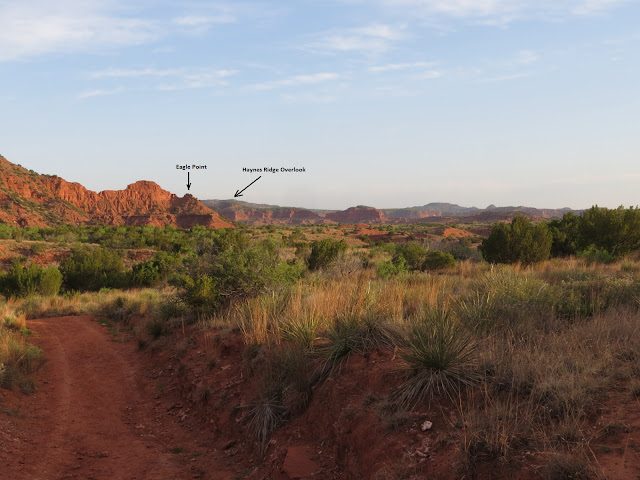 Looking back down the trail, with the South Prong Canyon behind Eagle Point and the North Prong there beyond Haynes Ridge, I can visualize the trail's original purpose of connecting the arid rim with the less arid canyons.

As a foot-trail it would have stayed up on top of the ground, but in order to avoid steep drops/climbs and get wagons up and down the trail more reliably, it was better to cut through this little ridge in the foreground.

I don't know how long ago the tractor was run down the trail, but in places the herring-bone tread-marks left by the large wheels are still etched through the overlying reddish dirt into the white gypsum just below the surface. 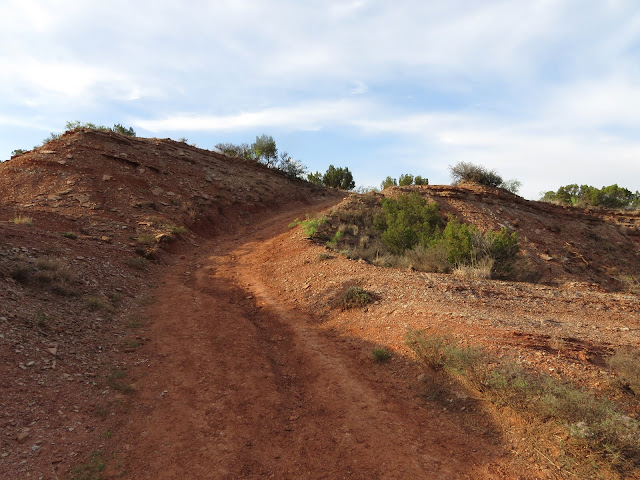 And here I can imagine struggling animals, drivers standing on the brake-lever, and skidding wheels as wagons dropped off the end of a little finger of a ridge extending from the rim out into the canyon.

If you go back to the Google Earth view you will notice that there are two red dashes in amongst the white dashes showing the route of the trail. This photo was taken from just below the second red dash from the top.

Why the red dash you ask??

Well because as I was trudging up this particular bit of trail, head down, arms pumping my hiking sticks, I looked up to see a pair of 1200 pound bison coming over the top and heading down the trail towards me. (No photo of that particular moment in time because I was too busy un-freshening my underwear.)

My first thought, as I scrambled over the side onto the most rugged bit of ground I could find without falling off the edge in the hopes that they would not want to follow me there, was of that pair of cow-calf bison I saw heading onto the upper end of the trail yesterday.

But these turned out to be a pair of bulls (Oh great. This is getting even better!) that paused along their plodding way, huffed and grunted, rattled a few cedar branches, and gave me the stink-eye. 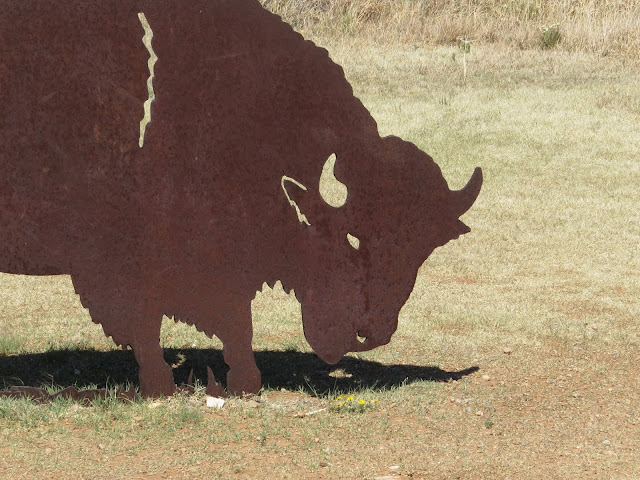 Bison are experts at stink-eye. Even the steel cutouts of bison up by the interpretive center have the stink-eye down pat.

But apparently I wasn’t worth more than a few seconds (Was that all it was? Seemed a lot longer. . .) of stink-eye and a handful of final grunts and huffs before they grudgingly continued on down the trail to wherever they were going on to.

(I can just imagine bison shouldering their way through the doors into the visitor’s center, knocking over a kiosk or two on their way to the front desk in order to pick up the latest trail-map.) 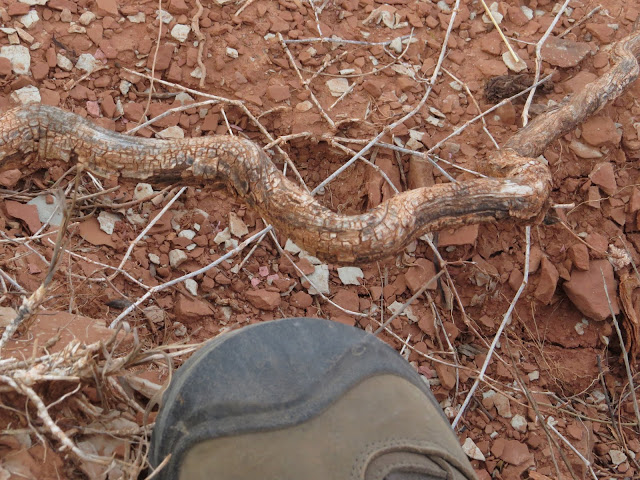 But the adventure wasn’t over yet!

As it became apparent that the bulls were going to go on by without turning me into toe-jam and horn-adornment; just as I started to breathe again; I looked down to discover that I was practically standing on this snake.

OK, so even before my feet came back to earth again I realized it was a root and not a snake, but come-on! Was that necessary? 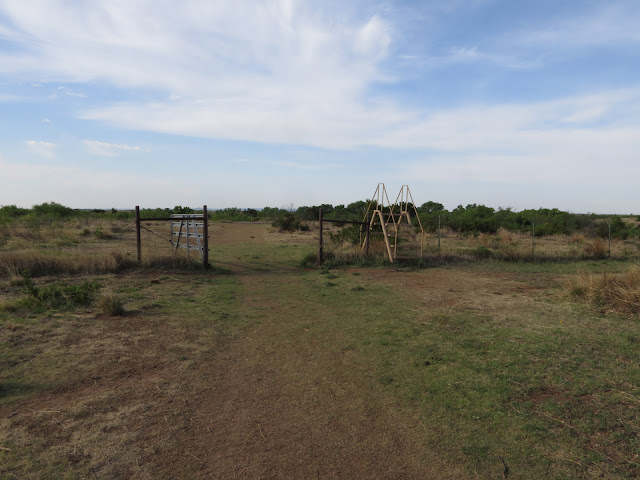 Keeping one eye over my shoulder just in case those bulls changed their minds and the other on the horizon where the trail disappeared there in front of me, I eventually make my way up to the top.

That gate there, right about where the top-most red dash is on the Google Earth image, is the end of the trail and beyond  that is Lake Theo.

Except that you know there has to be a reason for this second red dash. . . 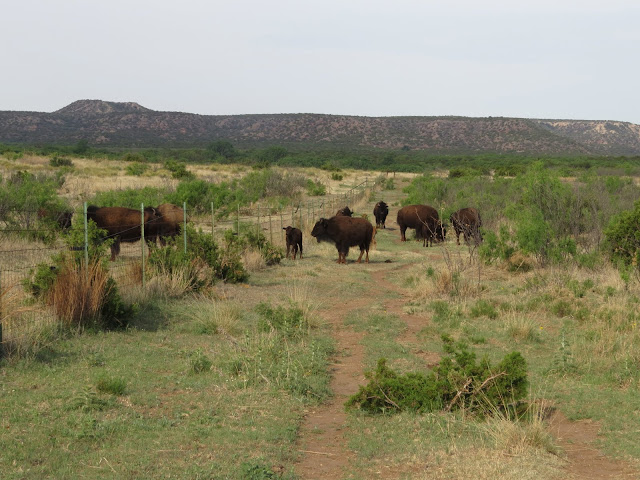 OK, be nice little cows. No, no! You’re right. That was insulting. I meant nice little bison. Everybody just take it easy while I casually slip through the gate and go on my way 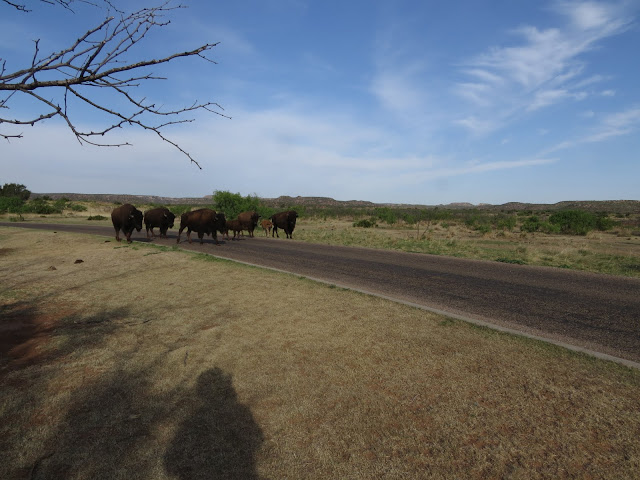 Except that it was a trap, a diversion for suckers like me, because not all of the bison were there hanging around by the fence.

As I was easing along the road, keeping well away from the bison-gathering at the fence and almost starting to believe that I had it made, this group ghosted out of the scrub to the left, where Lake Theo is, and chose to wander down the road towards me. (Reminded me of a scene in those city-movies where a gang is slowly approaching a solitary, wide-eyed, sweating innocent victim. Never did like those scenes!))

I guess this group hasn't read the Bison Encounters 101 pamphlet handed out at the visitor center. The one that says maintain at least a 50 yard distance.

The only way that was going to happen was if I turned around and ran, and I was pretty sure that wouldn’t be the best move for me to make at this point, besides, I’m not entirely sure my legs were even capable of turning around and running. . . and things like that are best not tested, lest I destroy any inflated self-delusion about my level of bravery and macho-coolness. 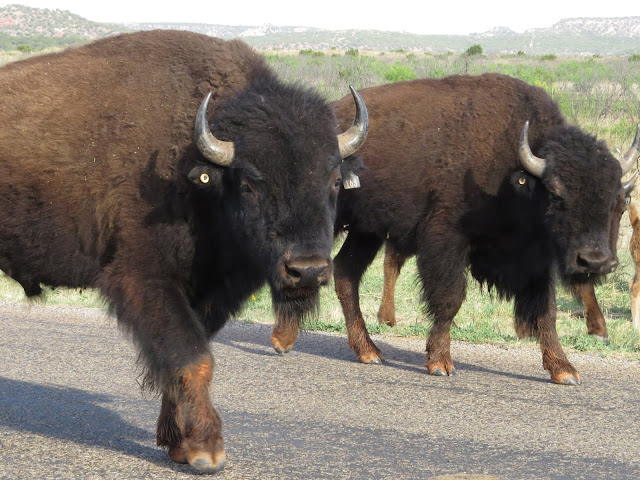 Once again I found myself the recipient of the bison stink-eye as all the big ones kept both eyes on me while the little ones bunched together over there behind them, as far away from me as they could get. And believe me, I can empathize with them on that maximum distance thing.

And you see that one walking on the grass on my side of the road two photos ago? The one staying closest to me the whole time? Number 163? 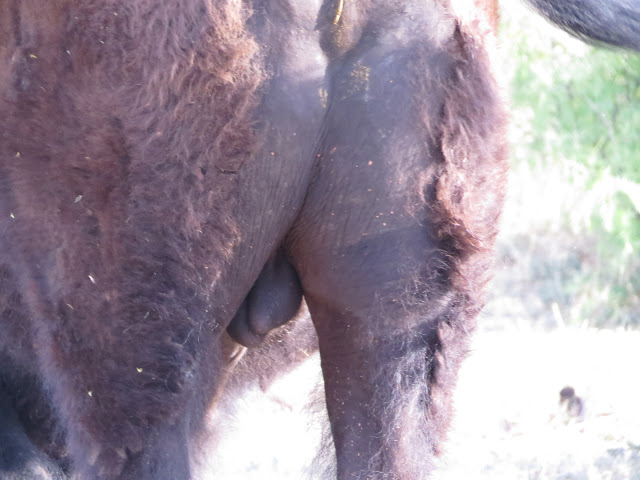 That sucker was another bull. And we all know the effect those dangly bits have on aggression levels, be it birds, bison or Buba's. 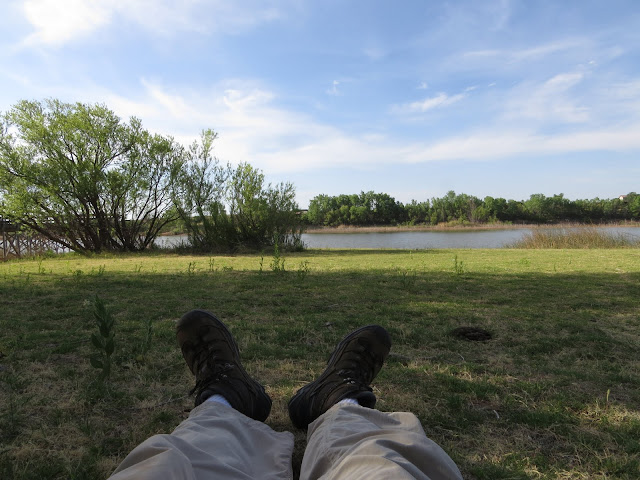 But once again I survived (Once again, thank you to whichever entity pulled my chestnuts out of the fire. In situations like that I tend to call on any deity I can think of so am never sure which one actually did the work.) and was soon sprawled on my back in the delightful breezes along Lake Theo, trying to ignore that nagging voice in my head that insisted on reminding me I still had to go back down the trail, you know, that one where there seemed to be a whole lot of bison hanging around looking for trouble.

But a few hours later the shifting sun forced me to my feet there along Lake Theo and, since, based on the ache-level in my legs, I couldn't guarantee that I would get up again if I laid back down, I figured that since I was up the smart thing to do was head back towards the spot where I left The Van.

As it turned out, I made it back down into the canyon without ever spotting the main herd. I did see the two bulls, the ones that jumped me on the trail, off in the distance, but now they were well away from where I wanted to go and seemed content with the available browse, so that was good. 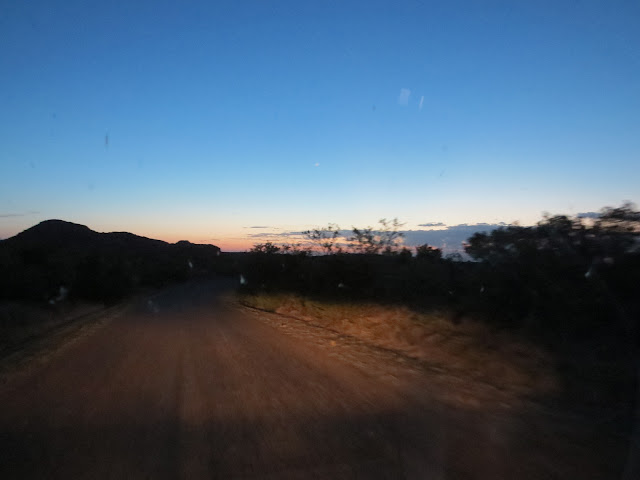 The next morning I needed to head back to the house, and since it’s a long ways from here an early start was called for.

After two separate week-long visits there’s still bits of Caprock Canyons State Park, as well as most of the Caprock Trailway, I haven’t stuck my nose into yet, but those will have to wait for next time.