(Something) Touches Red You're Dead?? 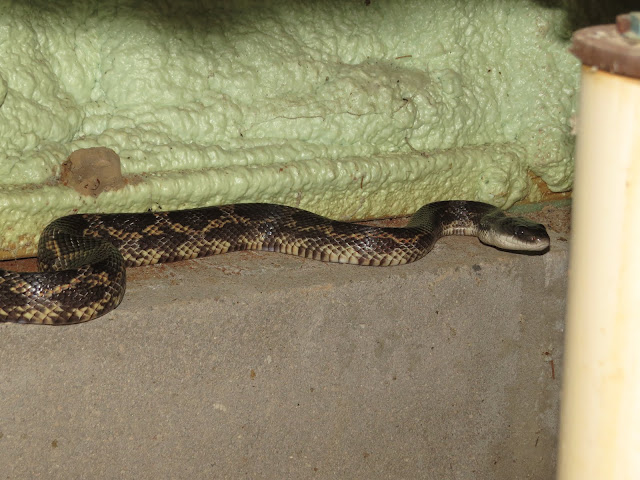 Once in a while, while doing my laps on the back of the property, I run into a snake. The vast majority of the time it's a Texas Rat, a grumpy but otherwise harmless reptilian neighbor, (To big critters like me anyway. I'm sure the voles and field mice have their own take on this.) like the one above that enjoys lurking in the well-house's warmth. (That's the top of the well casing over there on the right, ruining my otherwise perfect composition. . .) 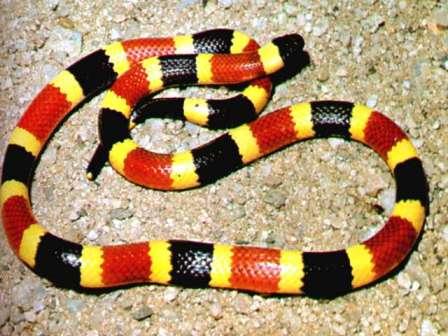 But today, up on the southern end of the ridge-top I ran into one of these. It was about 2.5 feet long (Actually, at the time I figured it was more like 20.5 feet long but you know how things like this tend to get exaggerated.) and must have recently shed because it was very bright and shiny with well defined borders between the colors.

Being a pair of very civilized creatures we both went our own ways, each suffering nothing more than a momentary fright.

There are two red, yellow, black snakes. One is venomous and the other is not. All the way down the hill after our chance encounter I was trying to remember the mnemonic (Isn't that a weird way to spell the word?!) I was taught as a Boy Scout. I knew it was about which color touches red, but I couldn't remember if it was yellow or black that makes me dead.

Well apparently my Boy Scout days are too far behind because according to the The Art of Manliness Guide to Snakes, the publishers of other manly tomes such as How To Ram Through Vehicular Roadblocks: Becoming Antifragile: and How to Make Women Like You: (And the source of the image above since I didn't have my camera with me at the time) the mnemonic is actually Red and Black friend of Jack; Red and Yellow Kill a Fellow.

Clearly I just had a close encounter with a venomous Coral snake; but since I wasn't going to pick it up and put it in my pocket anyway, Coral snake or King snake, it doesn't really matter. (Beyond having a Manliness Encounter that is.)