An Exercise in Fluid Dynamics


Often times when it rains here in Central Texas it RAINS. This is our rain-gauge on May 3rd. It was empty on May 1st. Of the 6 inches or so in the gauge, 5 of those fell in about an hour and a half.

As I've mentioned before, nothing about our property is flat, so when it rains like that we don't have to worry about flooding, but we do get some serious runoff.

When things eased up I, as usual, was out inspecting the fresh washouts in our driveway to determine which ones we could live with and which I would have to do something about, when I came across a chunk of pressure-treated 2x8 about a foot long sitting out in the middle of nowhere. At first this was curious since I hadn't been doing any projects with treated lumber recently, but then I looked uphill and the light dawned. That's when things went from curious to alarming.

The Wife has a little barn of her own where she shelters the remaining 'stray' cats, all pretty dang old now, she collected when we lived in town and where she also keeps all her craft supplies. It's one of those "portable" buildings you see being sold along the roadside, at least you see them along the roadsides around here, that we have wired, insulated, paneled and air-conditioned. (The Wife needs lots of air-conditioning from May through to October. . .)

Despite what they call it (Here in Texas "portable" buildings without foundations or concrete slabs are ignored for property-tax purposes, which makes them popular.) her barn is hardly portable, being about the size of a small two-car garage, and it had to be built on-site on top of a gravel pad. Once the pad was prepped, by a contractor that supposedly knew what he was doing, (I shouldn't complain, the barn's been there for over a decade.) the guys showed up with The Wife's barn, or at least the components of The Wife's barn, on a trailer. It took the two men a very long day to get the shell up and it is supported on a whole bunch of concrete pads with bits of treated lumber on top to level out the floor-joists.

That bit of lumber I found hanging out in the middle of nowhere directly downhill from the barn had to be one of those bits.

Sure enough, when I got down on my belly and shown a flashlight under the barn - well - it was bad. . .

The damn thing was giving birth to our own personal Grand Canyon under there and at least one of the support pads had been sitting right in the way.

Holy Crap! One more good rain and the whole damn barn might end up down in the pond! 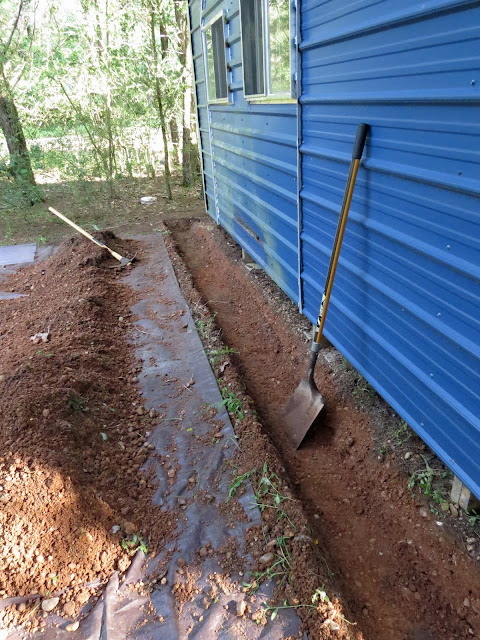 After a sunny break of a couple days we were due for another week-long round of rains projected to total up to another 5 inches (Normal rainfall for May is 4.82 but we don't always get normal.) so I needed to do something about this situation like right now!

Since the barn was still standing firm despite the loss of some of its support I decided my efforts were best focused on finding a way to prevent any additional gouging out of our own version of the Grand Canyon.

My solution, at least for now, was to divert the runoff to places where it wouldn't be washing the barn down to the neighbour's ranch. (Because I'm pretty sure he doesn't want it.)

I started by digging a trench along the uphill side of the barn. (When you write it down like that it sounds so easy, so offhand, but you try digging an 8 inch deep, 14 inch wide trench in undisturbed,wet, sandy-clay gravel! And do it without dying in the process!) 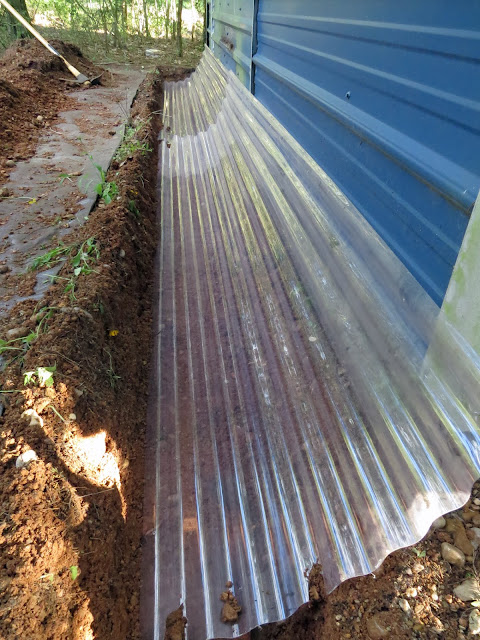 Then I dropped a couple sheets of left-over polly-carb roofing into the trench (I knew I'd been keeping that stuff around, like for over a decade, for a good reason!) 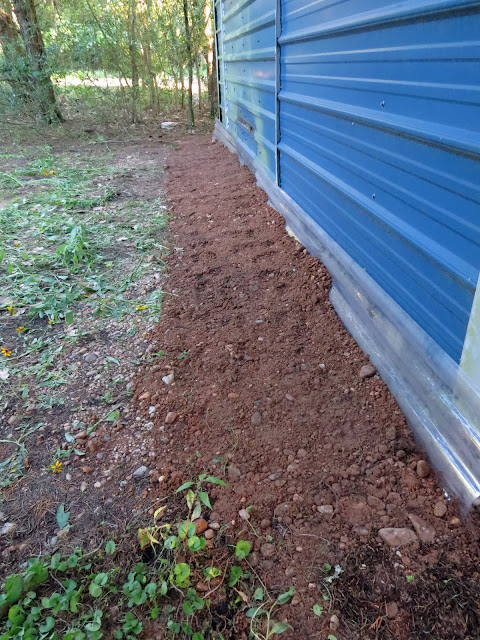 The idea, however deluded it is, is that water coming down the hill behind the barn will, instead of flowing right on under it, hit the exposed polly-carb while the buried part keeps it in place, and then divert to either side of the barn before continuing on down towards the pond. 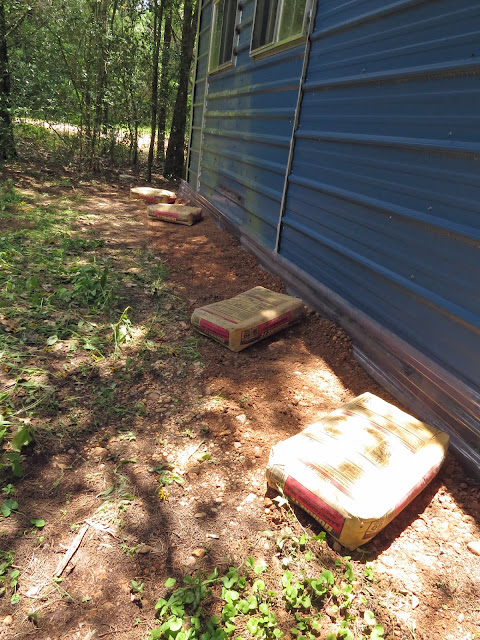 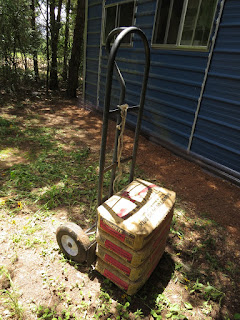 The next morning I dragged a few 60 pound "bricks" (I have some bags of topping mix that I managed to let get wet that I've been keeping around because - well, you never know.) up from where I had them tucked into a corner of the tractor barn.

I suppose I could have used the tractor to haul them up to The Wife's barn (163 steps away and all uphill -- I counted.) but that seemed a little on the decadent side, especially on such a nice sunny day full of birdsong, so I used the hand-truck instead.

Once The Wife found me passed out on the ground and revived me, (Which I'm pretty sure consisted of a few kicks [she says nudges but I don't believe her!] to the ribs while she muttered 'silly old fart.') I threw them down in the hopes of controlling erosion until the trench packs down hard and vegetation grows back and stabilizes it. Then I'll remove the "bricks". At least the trip back to the tractor barn will be downhill!

But I'll tell ya, a project like this is not good for maintaining the flabby-old-man-body image I've been working on so hard for so long.