Running #420, the Upbound Freight, on the Daylight Pass Railroad


In stark contrast to Mesa Hill, the run from Rockhouse to Cutoff is an easy, relatively straight, 4.9 miles of gentle uphill grade up through the lower end of Russian Flats. Tom and Jake are able to pull the 312 ton train, now whittled down to 3 loads and one empty, across the distance at the speed limit and in slightly less than 20 minutes. 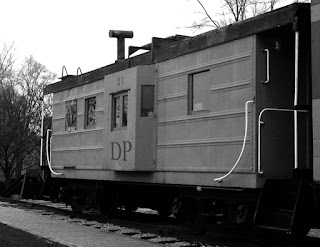 At this altitude, once they are moving again, mostly in the shadows thrown by the trees crowding the tracks, there is a definite bite, a sharp crispness, to the air, that has Ronald retreating into the three-sided doghouse on the tender’s deck to escape the worst of the wind, while Jake shrugs back into both his shirt and jacket as that air cools one side of him while the firebox heats the other. Back in the shelter of the house-car Otis tosses an extra stick or two into his stove and checks to make sure there is still coffee in the pot while Dean keeps an eye on the train from the relative comfort of his seat in the bay.

By rights Ronald, who has more seniority than Dean, should be the rear trainman, which technically is also second in command of the train behind Otis, but he usually has no trouble swapping with the other trainman, giving up the warmth and shelter of the house-car for the open air, and solitude, of the tender-deck.

It’s not that he doesn’t like them, the rest of the crew that is. Otis is one of the easiest conductors he’s worked for and Dean, despite being a shameless skirt chaser and avid partier, is always holding up his end of the deal, doing his share of the work, but experience has taught Ronald that socializing, talking, especially talking personal stuff, is not something that is part of him anymore. That’s something he left behind somewhere on a no-name Pacific island where he traded civilized niceties for the stench of the burned out tunnels and bunkers he had to clear in the most savage ways imaginable, sucking the humanity right out of him, and forever changing his view of man’s place in the world.

The fact that he is still alive while so many others aren’t shows just how good he was at the savagery and that frightens him. In the years since he hasn’t been able to claw his way back to the person he was before the war and now figures he probably won’t, but today, in this moment, that isn’t going to keep him from sitting up here keeping watch over his cars and enjoying being alive in such a beautiful, though sometimes harsh, place.

The leaves, those of the hardwoods anyway, are dropping rapidly and swirling in the passage of the train, sparking a sudden memory of Thanksgivings in western Pennsylvania with his aunts and uncles and lots of cousins. It’s a comfortable memory but a memory it will remain because Ronald, swaying and jerking up there in the solitary sanctuary of the doghouse, won’t be sharing this with the rest of the crew. Maybe, someday, with Cloe, but not yet. 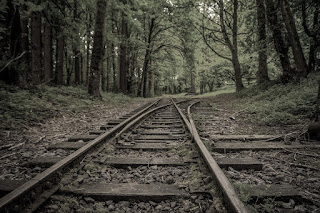 The altitude means the trees are slightly smaller along here than down around Big Timber, but it’s still forest and here on the lower half of Russian Flats, between Rockhouse and Cutoff, there used to be a couple of small logging operations that worked the area, but the two log loaders that serviced them were abandoned after the sawmill in Daylight burned and pretty much eliminated the market for logs, though the short spurs that serviced them have been left in place.

Instead of loggers anymore, the crew occasionally gets a glimpse of elk through here, but not today.

As they approach the west siding switch Tom sees that it is still lined for the main and that Matt, half of the station agent here at Cutoff, has just left the depot at a run to line it properly. Tom chastises himself for mindlessly operating as if he was still #420, assuming the switch would, as usual, already be thrown so he can just roll right on through it. This is an assumption that has him moving the train right along.

But the reality is that it isn’t surprising the switch hasn’t already been thrown since they are so far off schedule and switches must be left lined for the through route until needed. But, because this is the longest siding on the railroad, it’s a long ways from depot to switch, so now Tom is going to get there before Matt will make it, so he needs to get the train stopped short of the points.

The steady rhythm of a train easily covering distance is suddenly interrupted when Tom dumps 10 pounds out of the trainline while bailing off the independent. As soon as he gets the pressure in the trainline down to where he wants it he pulls the service brake lever back to hold then shifts his left hand to the throttle which he starts easing off, but not so much the engine stops pulling on the train as they slow. Otherwise, as he’s making this somewhat sudden stop the slack will run in hard enough to give Otis a nasty jolt.

If he doesn’t bail off by holding the independent brake lever down against the spring trying to force it back up, then the application of the service brake results in an equal application of the independent brake and without the engine pulling the slack will run in on him. Since he needs to gradually close the throttle as the train slows, start the bell, possibly add more brake if he hasn’t set them hard enough, (He does end up dumping an additional 2 pounds.) and bail off the independent all at the same time, he could really use three hands at the moment!

Many engineers keep a nut of just the right thickness, or even a carved wooden wedge, in their pocket which they jam between the housing and the independent lever to keep it forced down and bailing off hands-free, but this is against the rules because if the engineer forgets the independent is disabled like this it can be downright dangerous.

It’s inconvenient, juggling the service brake, throttle, and other controls with only his left hand as the right holds the independent lever down, but Tom prefers to play it safe and never wedges the independent. At least not anymore. Not since an incident on the SP 9 years ago scared the crap out of him. (Forgetting his wedged independent brake in a fog of sleep-deprivation, he cut the engine off a string of cars to run a quarter-mile up to a water tank and nearly ended up rolling right through a switch and into the side of an opposing train when he couldn’t apply the brakes.)

The train comes to a stop, more abrupt than Tom would have wished for, with Matt still 20 yards short of making it to the switch.

With the switch lined Tom pulls past Matt and lets the train drift down the longest siding on the railroad.* He brings it to another, much gentler, stop just short of the east Y switch, using the independent this time to gather up the slack so pulling the pin to uncouple the ore jenny from the house-car will be easier.

*This siding is long enough to fit two trains end to end, which is a real help here at the base of the West Pass Grade where trains tend to stack up waiting for their turn at the longest stretch of unbroken single-track on the railroad.