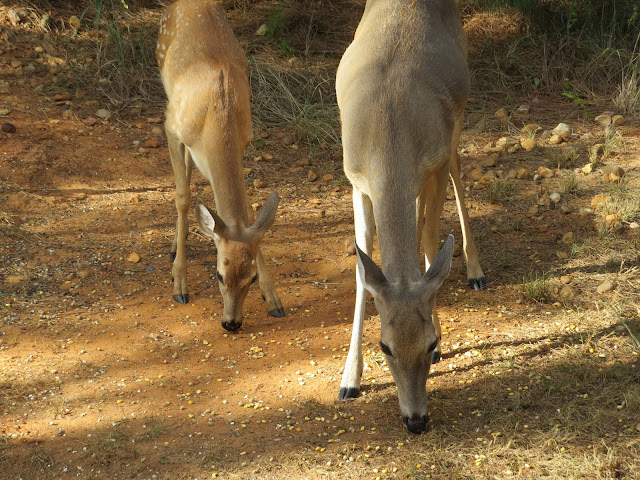 This doe (On the right) has been coming up to our back door for three years now to chow down on feed. Actually, if left to her own devices, like figuring out how to screw off the lid of the container, she would pig out on the corn and basically ignore the better-for-her deer-feed. (I mix a little corn into a scoop of feed before tossing it out.)

As it is, once she's cleaned up the rationed handful of corn she'll stand just outside the barn and stare daggers at my back as I'm working on the computer, trying to get me to throw her some more. (When dishing it out I think of the corn as candy-corn. A little bit is a treat, more than that is unhealthy.)

But this works out well for her fawn who isn't as discriminating and scarfs down anything available.

It's getting late in the season and you can just see a few remaining spots on the butt of her fawn, and those are fading fast. 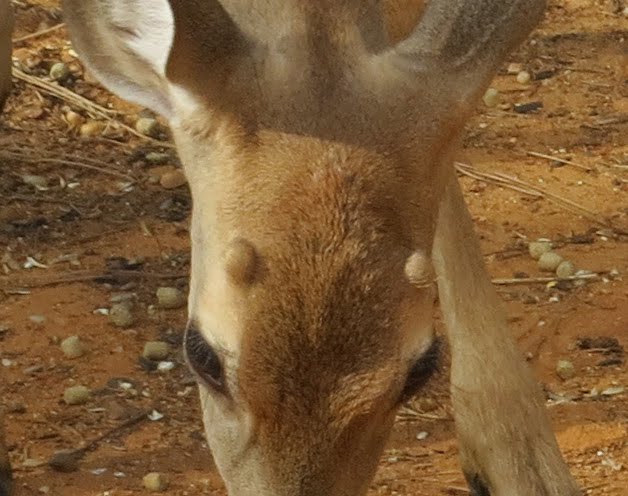 Late enough that you can clearly see this guy is starting to develop the spikes he's going to carry this fall.

And, like all pubescent males of most any species, get all full of himself until swatted down by one of the "real" bucks after mom has had her fill of his shenanigans and runs him off later this winter.

This doe's first year's fawn would never come down the bank, no matter how tempting the berry-smell of the deer feed or the lure of the "candy-corn". It took them a while, but the fawns of the past two years eventually worked up the nerve, (or got stupid enough!) to come down the bank and join mom only feet away from our back door.

That first year's fawn was a doe. The fawns of the last two years have both been bucks.

At a mere three individuals this is not a large enough sample size to make any conclusive claims, 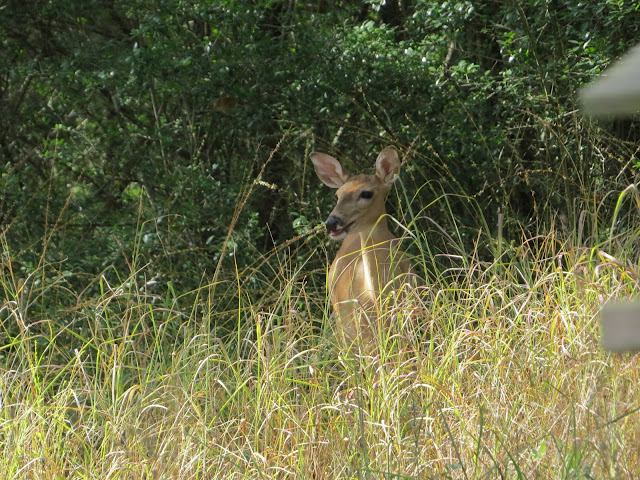 but this fawn, probably her niece, or even granddaughter, who hangs out with this extended family group of two doe's and two fawns, is either a very late bloomer or a doe, and lurks way up by the tree-line, never even getting close to coming down the bank for a little treat, which reinforces this sketchy gender-based behavioral observation.

But then again, (to be politically correct.) we also have a group of 6 bucks that hang around the area and only one of them will come up to the back door and feed, and the second fawn's mom is even more skittish than her fawn and is only seen occasionally unless they are off in the distance, so it probably comes down to individuals more than gender.