Sunscreen and Bug Juice or Bug Juice and Sunscreen

Being the product of Irish lineage I come by my fair skin honestly.

Growing up in the north we had two seasons, cold n coats, and beaches n bugs.

(I have an old beach photo, but since it includes all my siblings as well as many of my cousins I decided not to post it here.)

We were outdoors kind of people and when we weren't risking snow-blindness and sun-burning the undersides of our chins we were sizzling on the beach. But back then we didn't think much about the detrimental effects of getting those deep brown tans that we thought looked so healthy. (We came by that honestly too. When mom, pre-kids, returned from a summer nursing school rotation in Traverse City, with all it's sugary white sand beaches, her dad found her shockingly dark and wasn't at all happy, to say the least. . .)

Things are quite a bit different now.

Oh, I still spend the majority of my day either outside or in the barn with the big doors open and sunlight bouncing through. But now, being so over that deep-tan-is-a-chick-magnet phase that I use the SPF 100 stuff and embrace the pasty-white look, I go through so much sunscreen there is no risk of any of my several bottles, stashed around in various convenient places, hitting their expiration date. (In addition to zinc, which will last virtually forever in the bottle before it ends up on my skin reflecting sun's rays like millions of tiny little mirrors, sunscreens also includes one or more of a number of organic compounds that interact with UV rays, absorbing the UV as it changes their chemistry, and these do have a shelf-life.)

Growing up in the north also meant loads of bugs to deal with during certain parts of the year and bug juice was always a necessity. 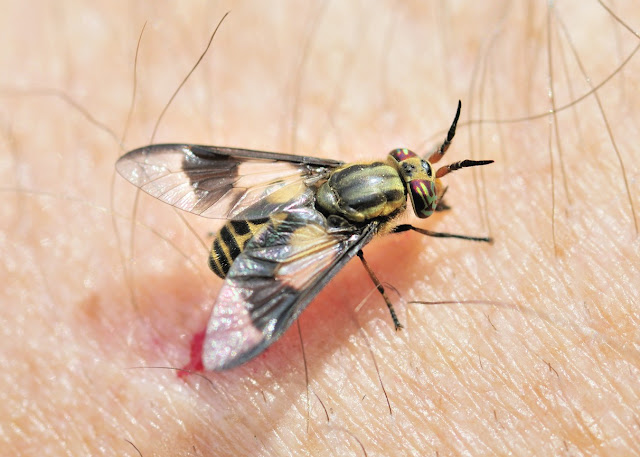 Here in Central Texas the sun is a little more intense, but the bug situation isn't so bad. Except one persistent bug that I have to deal with during my daily laps around the property, the Deer Fly. These are especially plentiful on the back half of the property which is heavily wooded and a favorite hangout for deer and feral hogs.

These suckers (and I mean that literally) are only medium sized little buggers, but they bite hard!

So, especially during the dog days of summer, that means bug-juice as well as sunscreen. 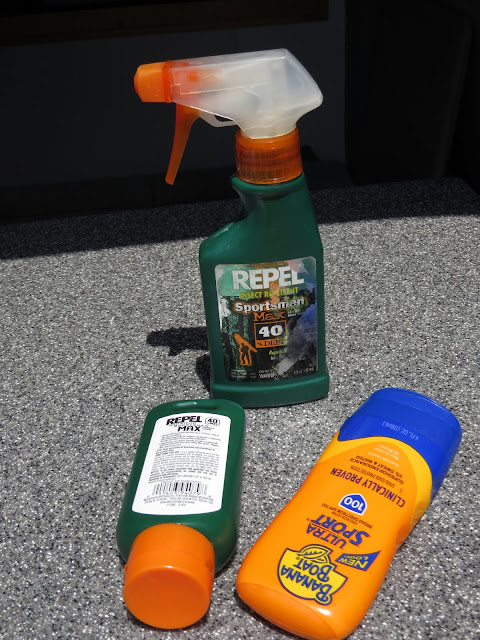 The cream style in the green bottle on the backs of my arms (Bared because I cut the sleeves off the button-down shirts I wear around the property) as well as the back of my vulnerable neck. I reinforce this with a few quick spritzes of the runny stuff in a spray bottle on the brim of my hat and, with some contortions that were easier when I was younger, the back of my shirt.  (Summer not only means deer flys, but it also means I sweat right through my shirt during my laps and those damn flys will land on my back where I can't reach them and bite right through that clinging shirt!)

So does it make any difference which order they are applied?

Well yes, it does apparently.

According to those that are supposed to know, the sunscreen should go on first because for maximum effectiveness it needs to settle into the skin (Which is why it should be applied about 15 minutes before exposure) and floating on top of the light, oily bug juice kinda hampers that.

And while sunscreen should be applied generously, there's a damn good reason the instructions for the bug juice say to apply it sparingly, no matter how thick the bugs! 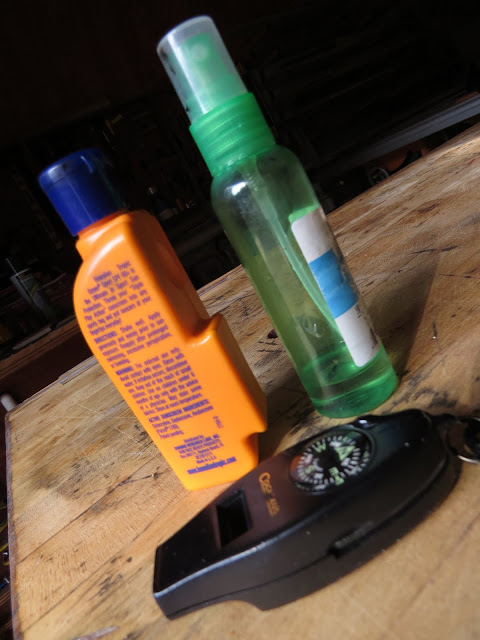 I carry a little bottle of each, sunscreen and bug juice, in my pack as well as another set in my bike-bag. They live in a small compartment along with a plastic combination whistle/compass/thermometer/magnifying glass (Supposedly for starting fires but once the plastic lens is scratched up by age it's really not very effective) just in case. 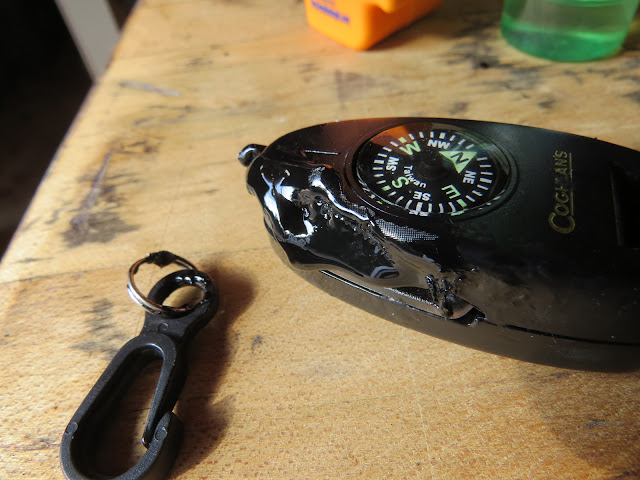 But this is what happened recently when my small bottle of bug juice leaked into the compartment of my bike-bag.

It was not pretty!

It took me a half hour and a good portion of a bottle of isopropyl alcohol to clean the sticky, black gunk of apparently perpetually liquefied plastic that used to be my emergency whistle from inside the compartment, then three rounds of pumiced orange gunk-off to clean my hands. (In my rush to clean up the mess I didn't think to don blue gloves until I was already screwed. . .)

So now, each morning when I go out to The Van to prepare for the day, I try to avoid thinking about what the hell that bug juice, that stuff that apparently liquefies plastic on contact, is doing to my skin.