The Van Needs a Transplant 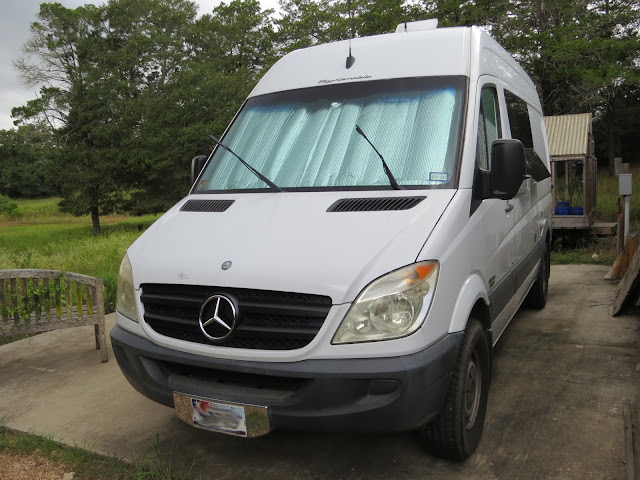 You might not be able to tell it, but right here The Van is looking a little forlorn and helpless.

Like all modern vehicles, The Van's heart is her battery, (True, The Van is just shy of 10 years old which is getting kinda old for vehicles anymore, but hell, at my age anything post 1990 is modern!) and after 9 solid years of service The Van's battery is beyond even hospice-care and has belched it's last electrons.

Which is not as big a deal as you might think 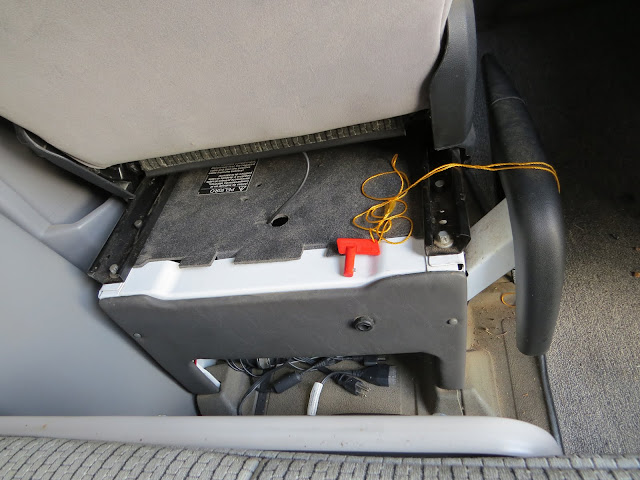 since, back in 2015, I installed a manual disconnect switch between the chassis and house batteries.

It's primary purpose is in giving me the ability to connect the alternator to the house batteries when a bulk charge is needed, (When the house batteries are down to a 60 - 70% charge, but not over 80%, and I need a quick burst of juice because I'm camped under trees which defeat the solar panels.) and only when a bulk charge is needed since the engine alternator is a terrible way to try and maintain deep-cycle batteries.

But I can also insert the red key into the exposed nub of the cutout switch, there in the back of the seat pedestal directly below where the key is laying now, and use the house batteries to "self jump" The Van's engine.

Still, knowingly running around with a nearly dead battery is not the best of ideas, even for those that live on the edge of not-the-best-of ideas. 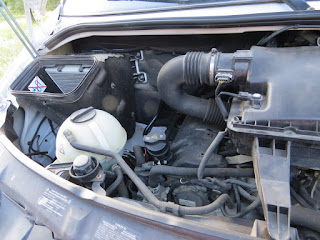 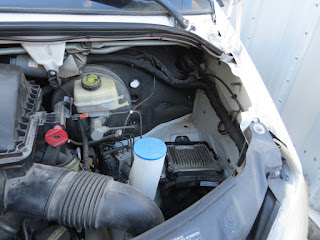 But where the heck is the friggin battery!!

There's enough room up here in the engine compartment to carry three cats and a half-dozen monkeys all at the same time, but no battery in sight. . .

Actually that empty space to the right of the brake-reservoir and just above the computer box is where the auxiliary battery goes for ambulance and other high-electrical load versions of Sprinter. 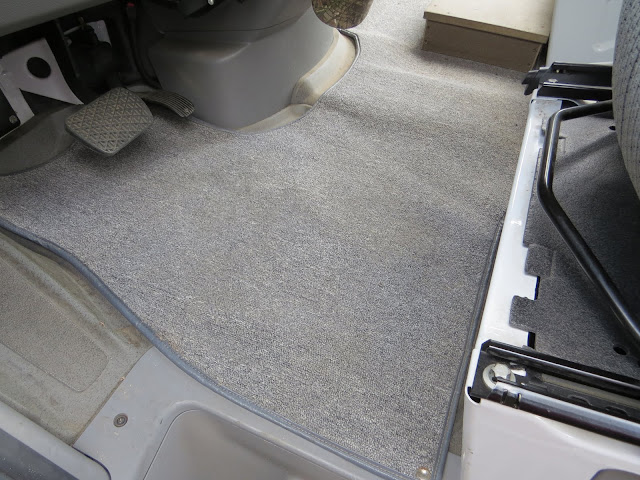 But those intrepid designers at Mercedes decided to put the primary, and for most of us the only, battery here.

Yeah, that's right, it's here under the driver's feet! 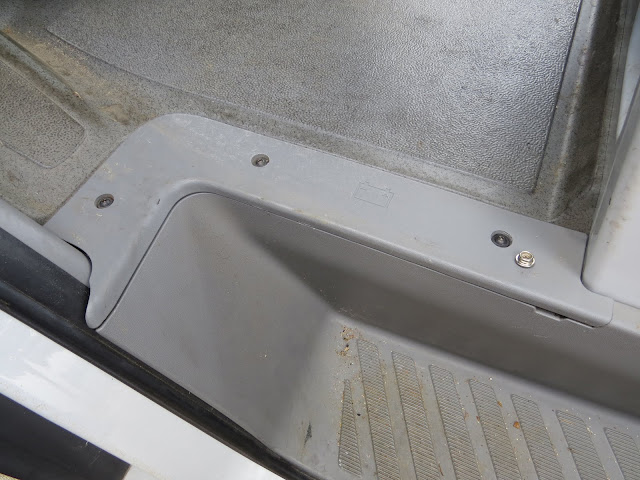 So after pealing back the marine-grade carpet -- not an option I asked for, but after a battery-acid incident during the build-out stained the marine-vinyl flooring I did ask for, right there in front of the sink for all to see every day, we, the builders at Sportsmoble and I, decided the least disruptive way to deal with it was to just lay the carpet down, at no cost to me, over the top -- the next step is to get out the #30 torx bit (Everybody carries a full set of torx with them nowadays don't they?) and remove that trim-piece around the upper part of the foot-well, 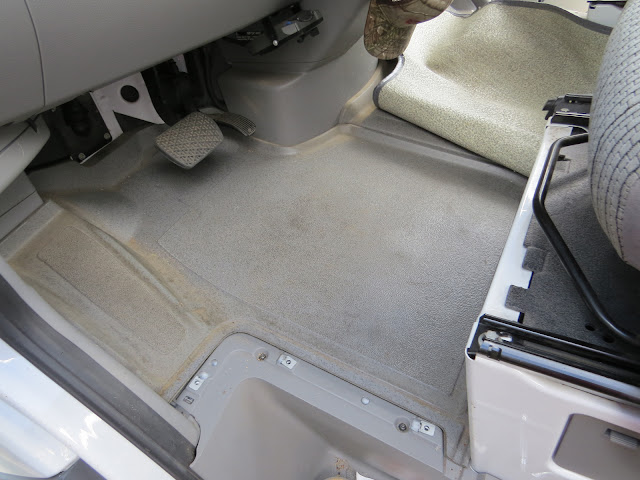 to release the heavy molded and well insulated floor mat, 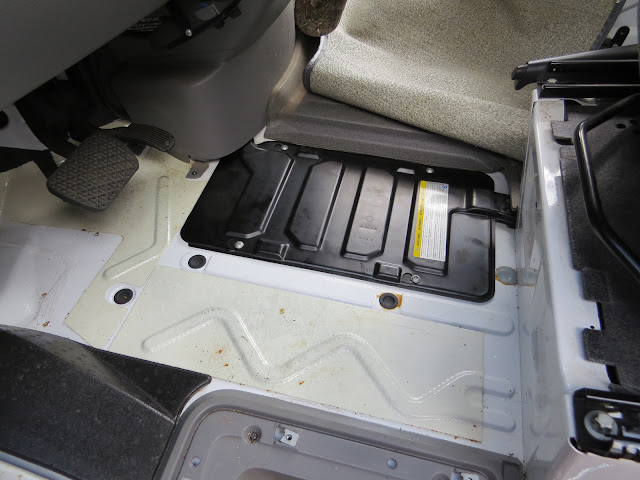 which exposes the black steel lid over top of the battery box. 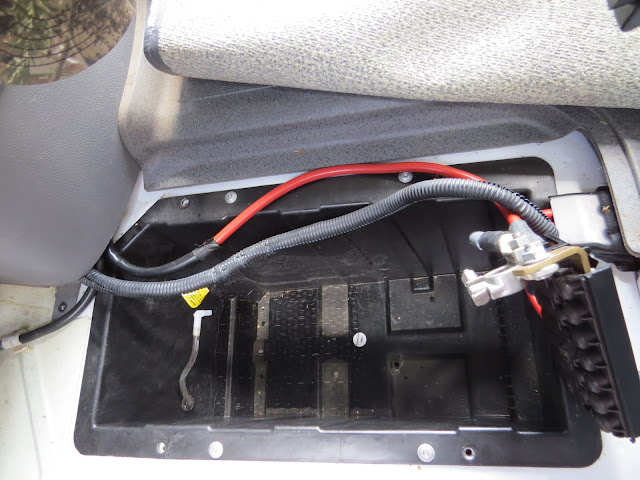 Actually, burying the battery here under my feet isn't the bad idea it may sound like.

After 9 years and 80,000 miles, when I opened up the box there was a little light dust and fluff gathered around the battery posts and not the least hint of any corrosion.

In fact, I did nothing to clean the box out and you can see how little evidence of the years is showing in there.

The big contraption propped up out of the way to the right is called a pre-fuse box and for those doing their own conversion, there are extra terminals in this box. Just bolt one end of an ANL type fuse to the bus-bar and an appropriately sized and terminated wire to the other end to add your own electrical crap.

The little tube over in the lower left corner of the box with the white elbow fitting on the end of it is the vent tube that plugs into one side of the battery's top cover. Not sure just how effective it is since mine has a pretty solid kink in the hose and there's nothing, no hose, not even a plug, in the other side of the battery's cover, but so far so good. 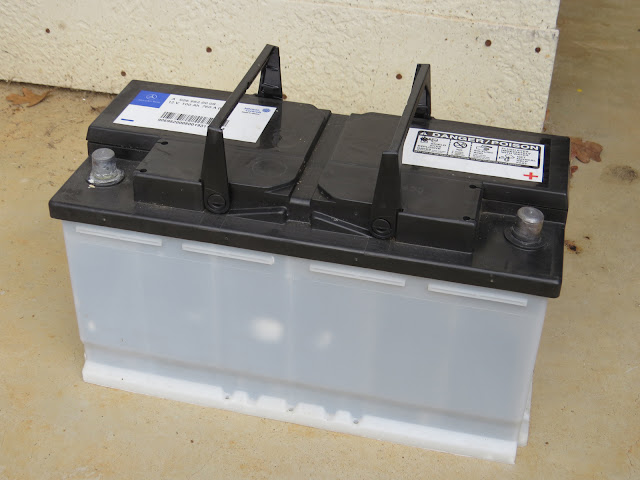 This is the battery that I pulled out.

As you can see, it's clean, and corrosion and wear free. Too bad it's also dead. . .

This is an AGM, which is obviously the recommended replacement.

If you've been following me for a while you know that I haven't had much luck with AGM deep-cycle batteries and have reverted back to flooded wet-cells which give me much better bang for the buck in terms of longevity, but when I jumped on the NAPA site to hunt down a new battery I was surprised to find that the cost difference between flooded and AGM starting batteries, at least those in the group-49 size that I need, are only about 30%, unlike the nearly 100% difference between the two types in deep-cycle batteries.

So, I clicked on the slightly more expensive AGM version, hoping that I get something like the 9 years of service life out of it that I got out of the original.

On top of that, I also knocked 20% off the price by putting in a silly promo-code that was lurking right there on the web page. 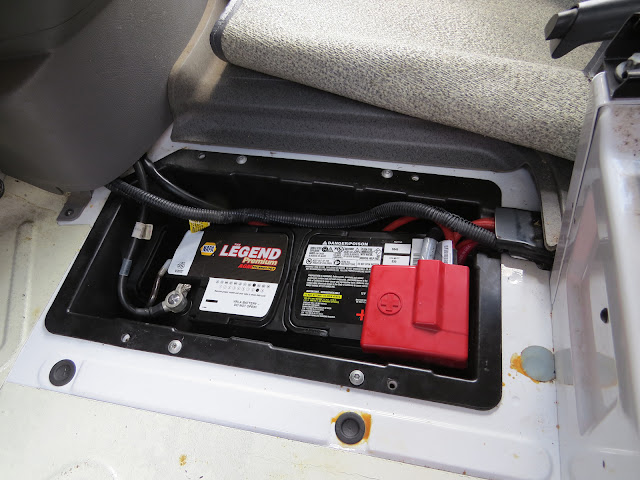 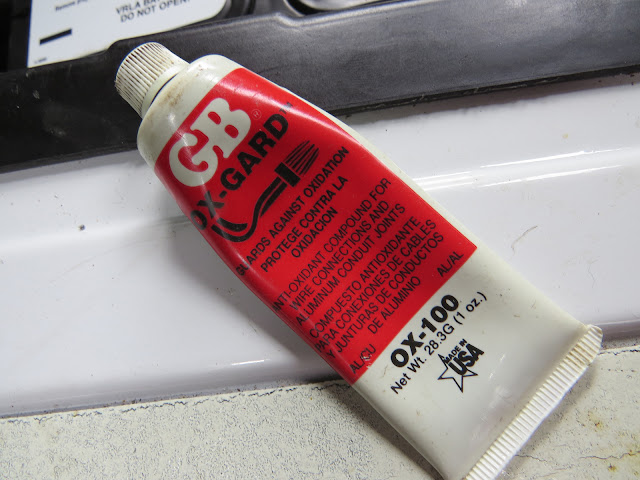 Even though the battery box has proven to do a damn good job of protecting the battery, like always, I used another couple dabs from my tube of dielectric, the same tube I've had for years now, on the posts, just to make sure. 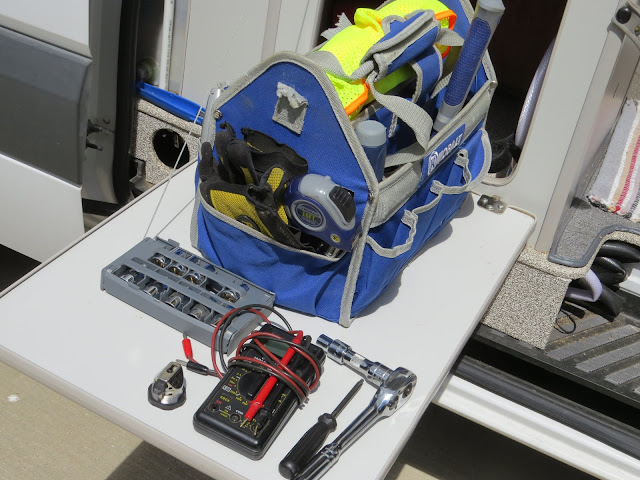 When doing these sorts of small projects on The Van, I make a point of using the tools I carry in her. That way I'm sure I've got what I need when I'm out there in the middle of bumfrig helland. 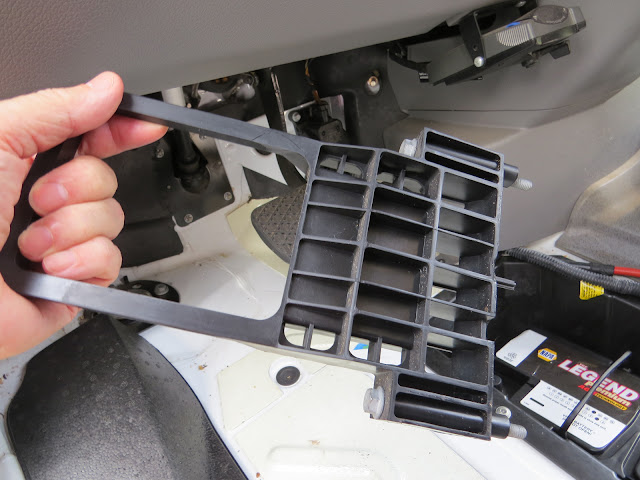 In this case I had to add an additional extension to my socket-set in order to reach all the way down to the 10mm bolts that hold this thing in place.

This thing goes down the side of the battery, the side facing the front, and locks it firmly in place, but I didn't have enough reach to get down to the bolt-heads without that extra extension.

Job done, and now a little better prepared for next time.