Pine Springs Campground is at 5700' and most everything goes up from there.

If you are a low-lander the elevation can sneak up on you fast, leaving you in a heaving, exhausted,  headachey puddle on the ground. (I'm talking about a friend of mine of course!)

OK, OK, Basically, like me, if you live anywhere from 1500' on down you're a lowlander and higher elevations can be a challenge. Especially if you are on the older side of the scale - hum, let's see, according to my brother on my birthday 25 years ago, 40 is halfway to dead, so - checking the scale. . . checking the scale - yep, definitely me again. Two strikes. . .

through hard-won experience I know my limitations, so when first arriving at lofty elevations (Altitude is often misused here. Altitude is for anything in the air  while Elevation is for anything on the ground, i.e Air = Altitude and Earth = Elevation) I like to pick out an easy hike to start with. A hike that I can gauge my elevation-fitness on without getting myself into too much trouble.. 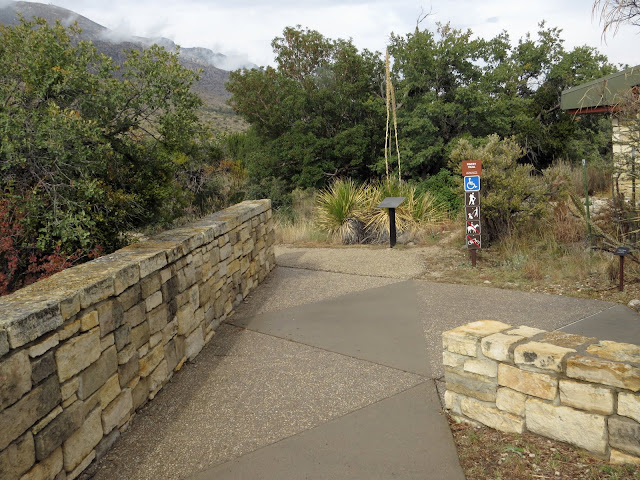 Around the back corner of the Guadalupe Mountains National Park Visitor Center is the upper trailhead for the Pinery trail which fits the bill as a "checkout" hike. 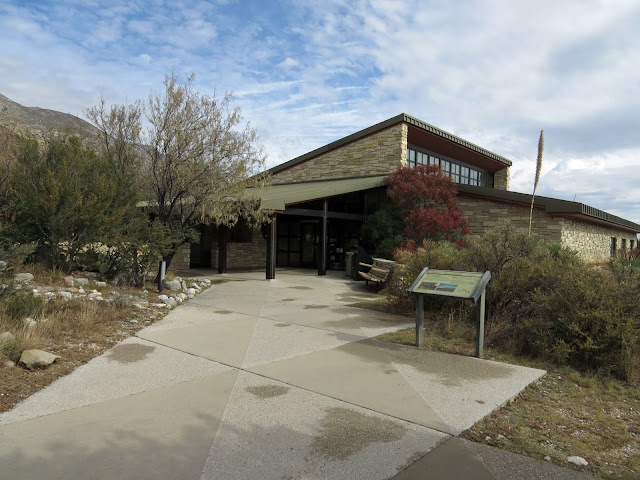 But before you go, it's worthwhile stopping in at the revamped visitor center. (Open 0800 to 1630 daily)

Inside, in addition to the front desk where maps, guides, and advice are available, there is a small theater where a short slideshow about the park is waiting to be seen, (the ranger will dim the lights, push the button, and start the show when asked.) as well as a decent little museum/display area designed to get you oriented to this place.

But once you've procrastinated all you can in the visitor center, there's nothing left to do but brave the trail.

The official trail leaves from the Visitor Center and meanders gently down to The Pinery, but as I mentioned in the last post, a trail from the campground to the Visitor Center can be found just behind the tent-camping pit toilets, pretty much doubling the distance to the Pinery but allowing you to leave your wheeled transportation sit where it is.

Round trip from the campground to the Pinery and back was two miles with an elevation drop/climb from end to end of a couple hundred feet.

If walking any distance at all is an issue, the Pinery, the location of one of the Butterfield Overland Mail Route stations, can also be visited in just a few dozen steps from the lower trailhead parking which is just off the highway. 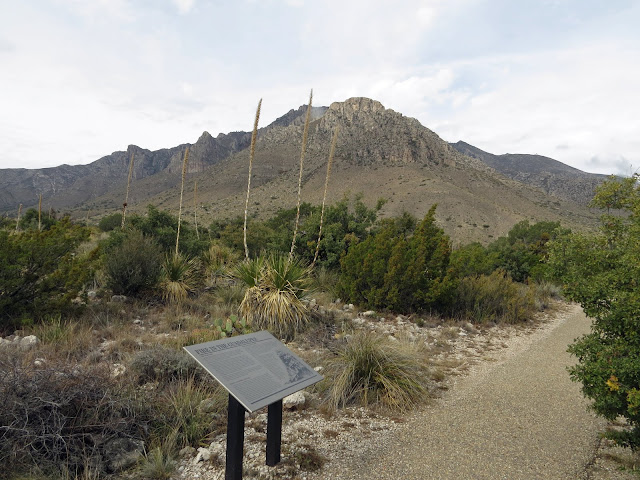 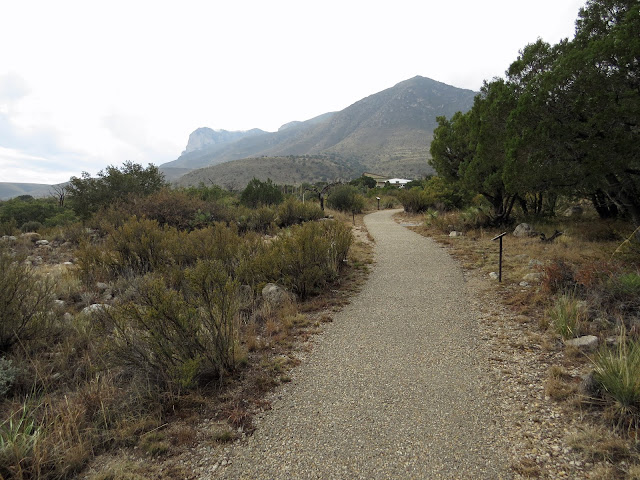 and lined with interpretive signs with some history, including natural history, as well as info on the various plants and trees found along the way.

I would recommend (based on personal experience) you save the interpretive signs for the return, or uphill part of the trip as they will give you plenty of excuses for stopping and puffing like an asthmatic chain-smoker while you read them. This lets you, without damage to your public persona, secretly rest up for the next few steps! 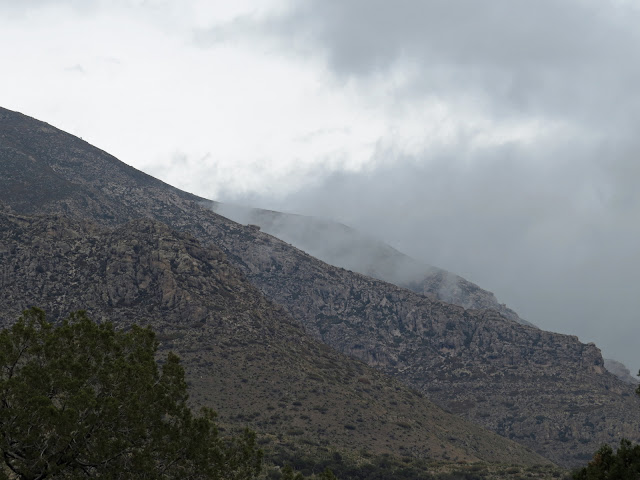 I did this hike the day I arrived, when the mountains were poking up into the clouds, 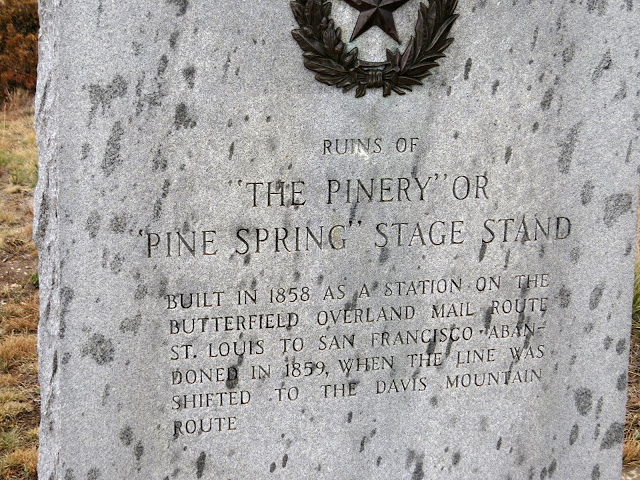 which would periodically get overburdened and spit big fat drops, but a rain jacket and my old Tilley hat took care of that. 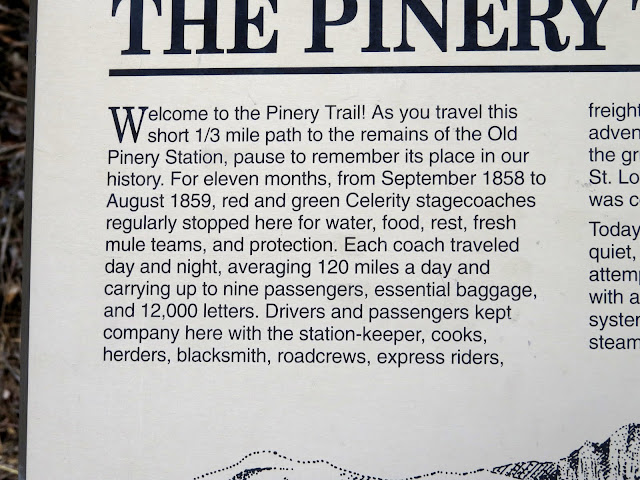 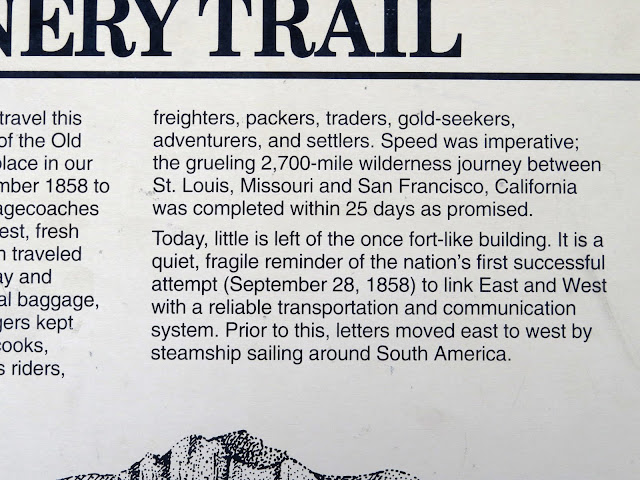 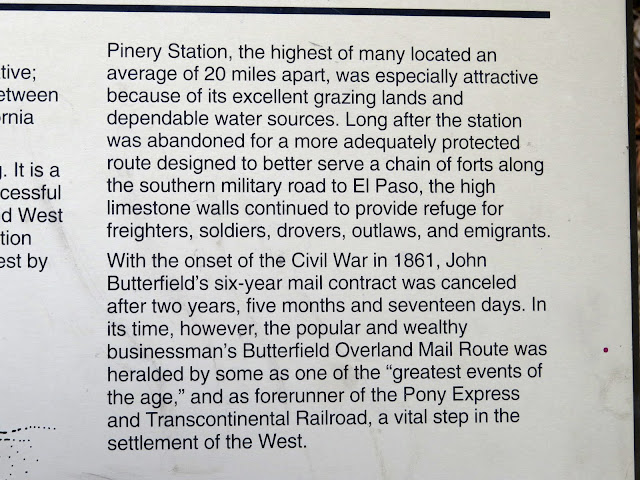 The Butterfield Overland Mail Route was a short but amazing chapter in east to west communications. After reading the account of a journalist that rode one of the first trips between St Louis and San Francisco I can only still imagine what it was like riding in that coach for 25 straight days as it slammed and bounced across the primitive trail at an average of 5 miles an hour nearly 24 hours a day.

Those people were made of tougher stuff than me! 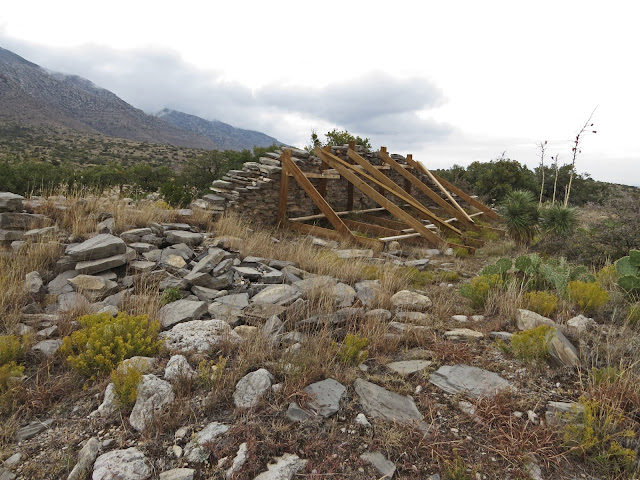 This part of the wall, 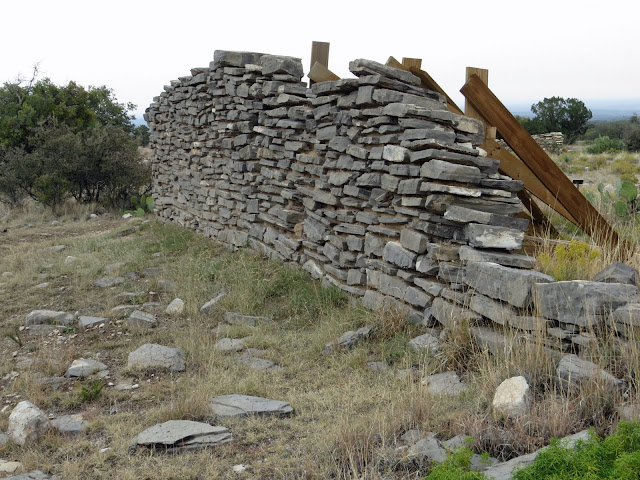 which is clearly in imminent danger of falling over and joining the rest of the walls laying in bits on the ground, 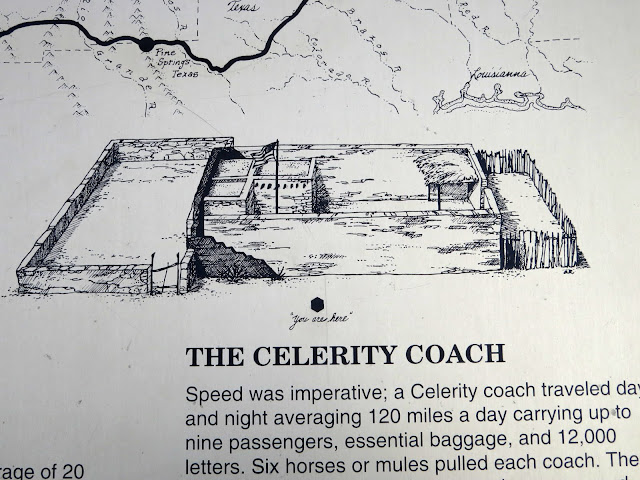 is the dark area shown in this drawing of what this particular stage-stop looked like back in the day.

A stone-walled corral on the left butting up to one side of an enclosed courtyard with three small rooms tucked into one corner and a cooking shelter in another, with another small stockade type yard  for temporary visitors on the right. 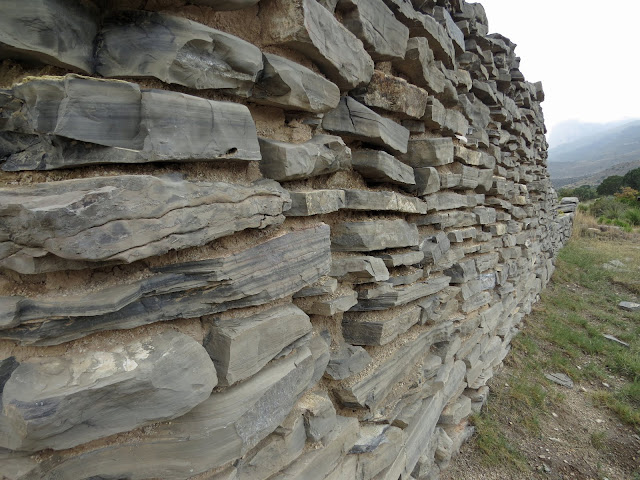 It didn't last long as a Butterfield stage-stop since the route of the stage-line was moved south about a year after it was constructed, but its shelter and water up here at the top of Guadalupe Pass attracted freighters, drovers, and immigrants long after the stage was gone. 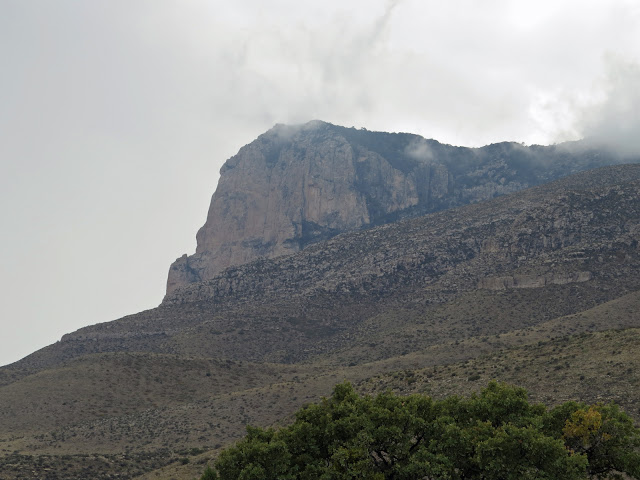 From here the original route west continued, actually still continues today as US-62/180, down the south side of the pass and around below the imposing 8000 ft buttress of El Capitan, but, since this hike didn't kill me, only kicked my ass, I'm going to hang around here at Guadalupe for several more days and trails before making that trek.