OK, I woke up this morning so apparently the mountain didn't kill me yet. Must be time for more hiking! 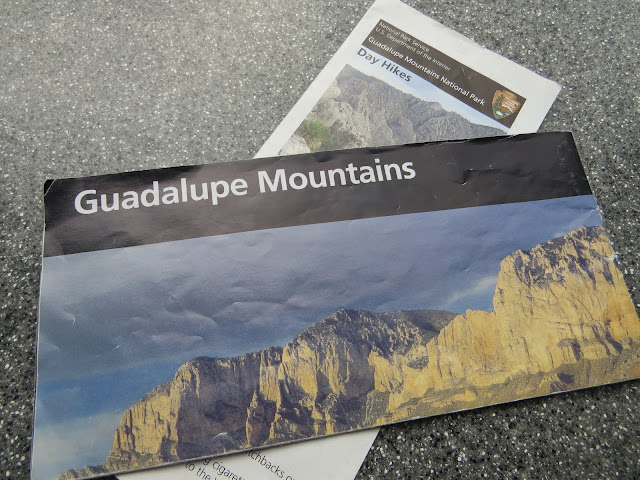 One thing a hiker should never be without, even in a familiar area, is a trail map. And here in Guadalupe, in addition to the fold-out map that fits nicely into the handy thigh-pocket of cargo pants, (This map is also available in PDF from the web site which can be downloaded onto a smartphone and tucked into a pocket as a backup.) they have also produced a flyer of suggested day hikes. 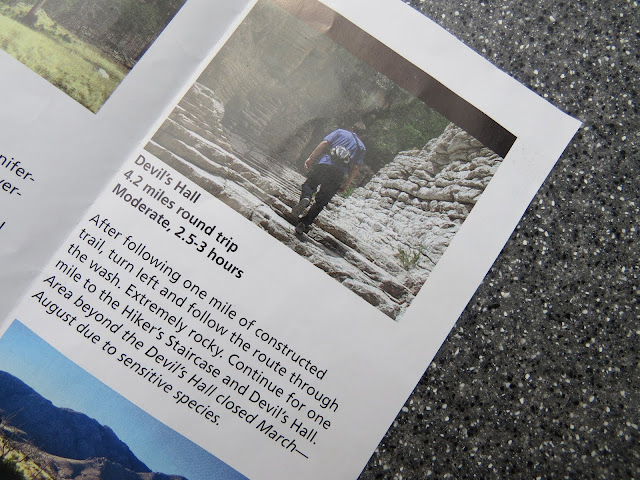 And after some careful perusing last night while I was optimistic about my chances of surviving until morning I picked out the Devil's Hall for my next hike in these mountains.

It's main attraction, here on only my second day at this elevation, is it's moderate rating, primarily because of an elevation gain/loss of only 600'. (Of course even that equates to climbing up then back down the stairs of a 50 story building.)

Although I'm not sure just who it is that determines length and time for these hikes!

First off, you have to be practically running to complete 4 miles of trail in 2.5 hours, at least by my standard average of 1 MPH or less when hiking. I mean for crying-out-loud, I'm not out here to rack up my step-count, I'm here to experience the place, and that takes time! (Yep, go ahead. You can say it -- I'm slow.)

Secondly, my GPS track invariably comes out to be longer than the stated distance. In this case,  even though I just barely poked my nose into the actual Devil's Hall portion of the trail, my round-trip distance was just shy of 5 miles.

Which is about normal for me. If a trail is listed as 8 miles long, somehow I usually come in on the high side of 9 miles. 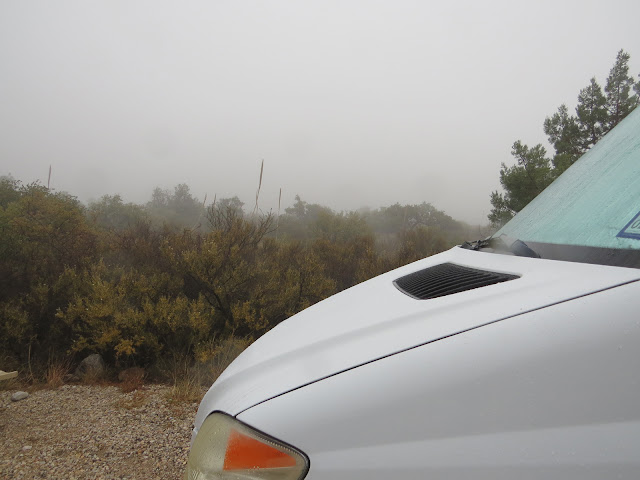 Yesterday the mountains were just doing some heavy flirting with the clouds, a little playful give and take.

This morning the mountains are firmly inserted deep into the belly of the cloud. 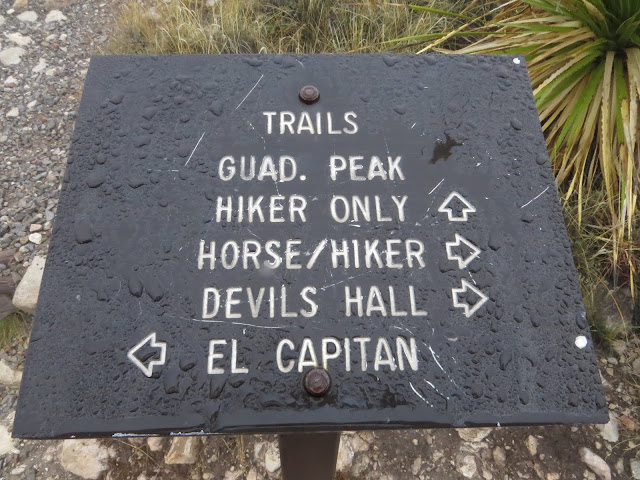 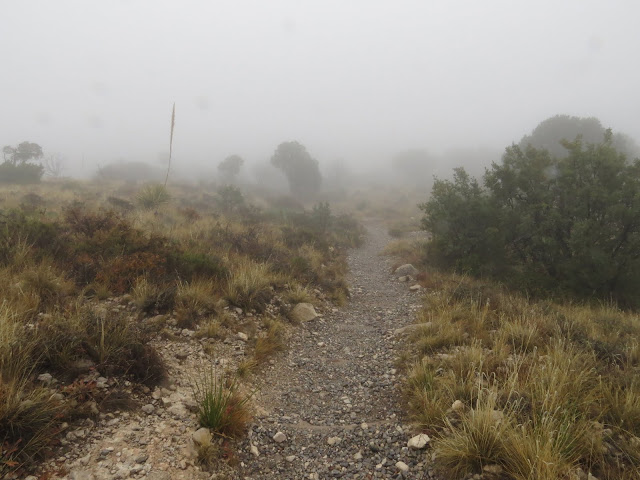 Donning rain-jacket and Tilley hat once again, and making sure my GPS is locked on and tracking, I set off anyway. 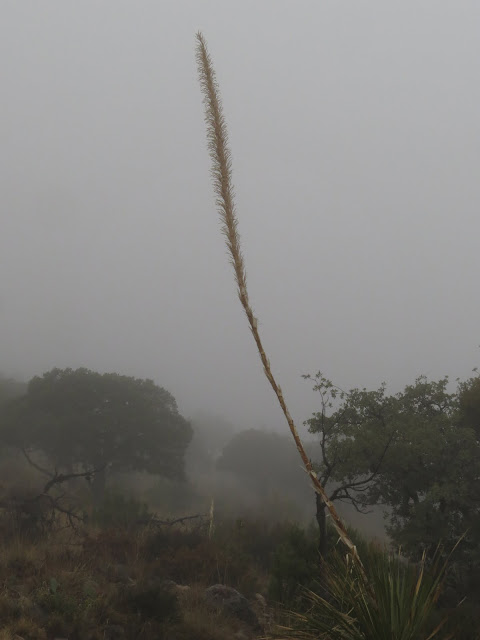 Yes, the clouds are obscuring the view of the mountains I know are lurking there above me, but it's also kind of nice to be forced to pay attention to the near and up-close as murky shapes materialize ahead at a walking pace. 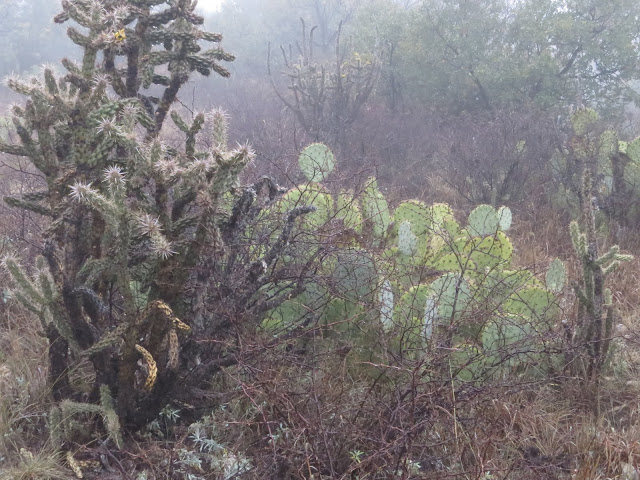 This is a day of appreciating the small details, such as the contrast in shape and color of these two wildly different cacti.

And just look at how the needles of that Cholla on the left shine even in this diffused light. 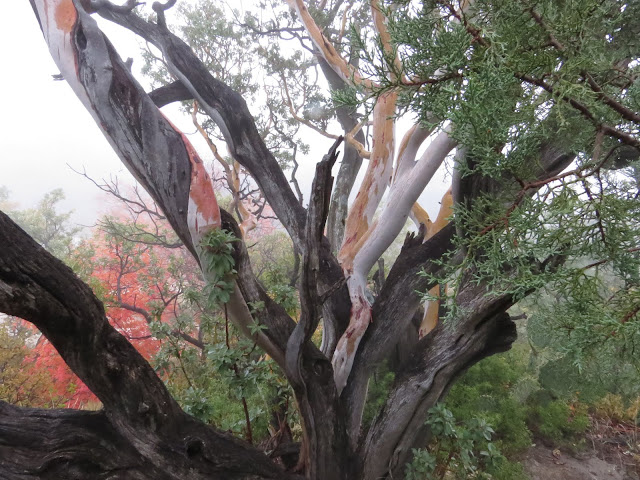 As I climb up into the protection of the canyon trees start to appear, but it's clear that life up here is not easy. 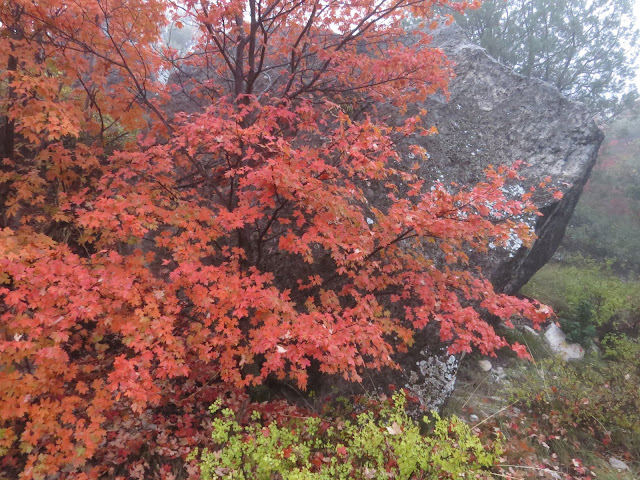 It also quickly becomes apparent that my timing, though inadvertent and purely accidental, 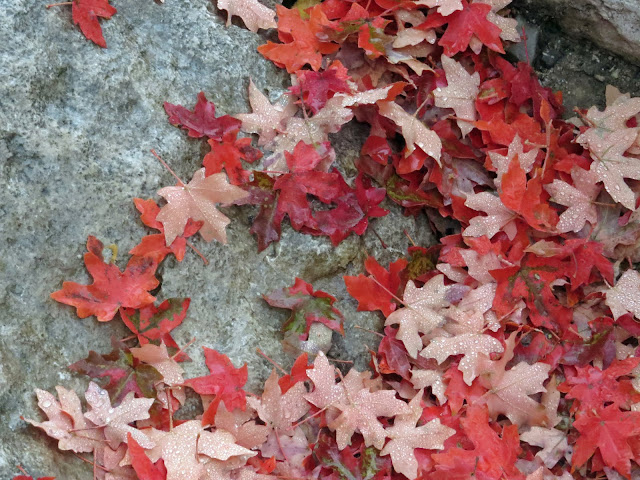 is just right for catching the maples up here in full color. (In another bit of calendar unawareness I also didn't realize when I left on this trip that a holiday weekend [Veterans Day] was screaming towards me like a freight train - but I survived.)

Did you know that the yellows and oranges of fall were in the leaves all year, just hidden by the chlorophyll, but that the reds come from anthocyanins, the same stuff that makes blue-berries blue, which are produced by the tree right at the end of the growing season, probably to act as a sun-screen to protect the leaves during the tree's last ditch attempt to extract all the sugars from the leaves that it can?  Which is why dry, sunny years are best for red fall colors.

Sorry, there's that botany course I've been taking kicking in again. It's not imperative that I know stuff like this, but it sure is interesting. 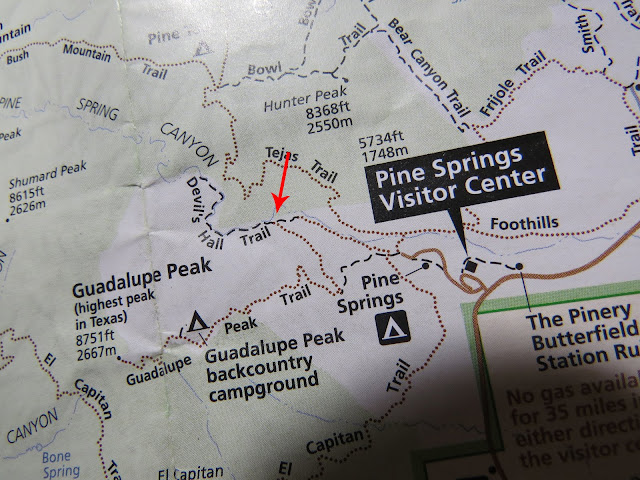 Initially I was following a traditional trail, but about halfway to Devil's Hall the Guadalupe Peak Horse Trail abruptly cuts off to the left and up 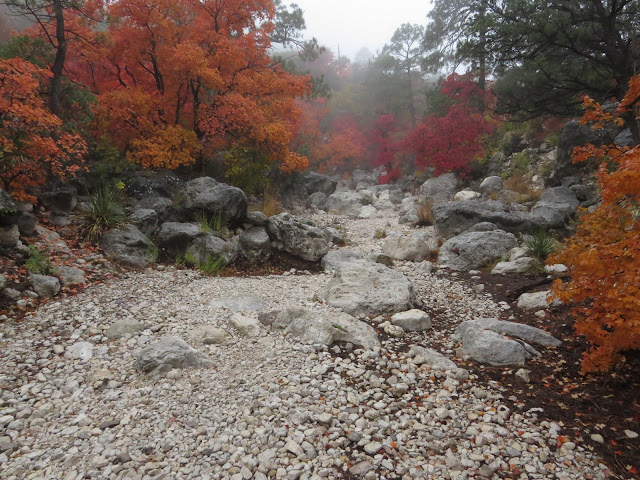 while the Devil's Hall trail continues on by devolving into the wash at the bottom of the canyon. 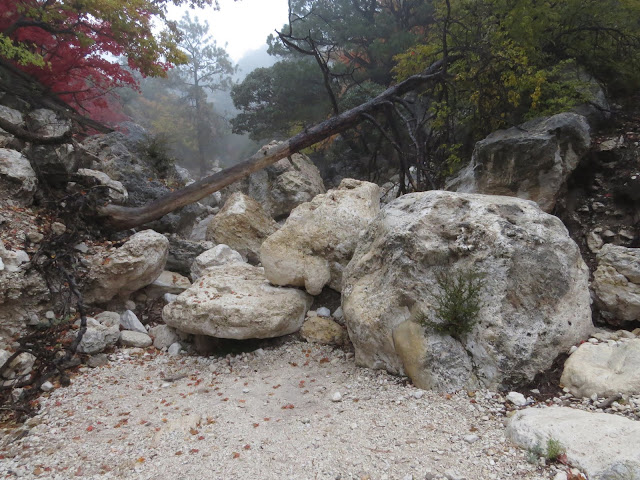 By definition, the bottom of a wash is a highly changeable place and sometimes the way forward was more trial and error than - well - trail. (There's a reason most established trails cling to the sides of canyons rather than follow the bottoms!) 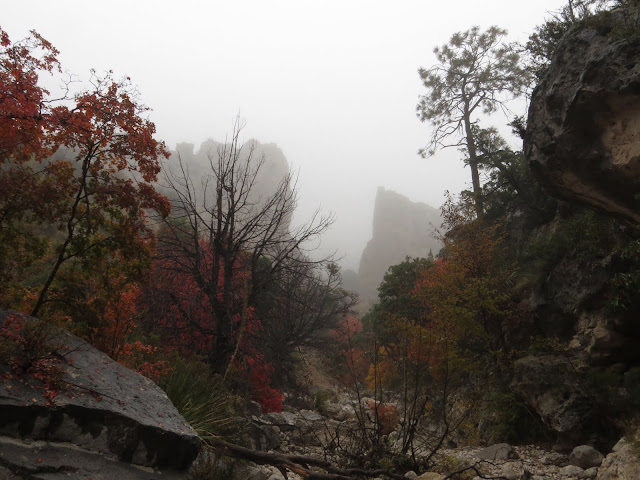 By now the clouds seemed inclined to ease their grip on the mountain just a little and I was getting the occasional ghostly preview of what was ahead. 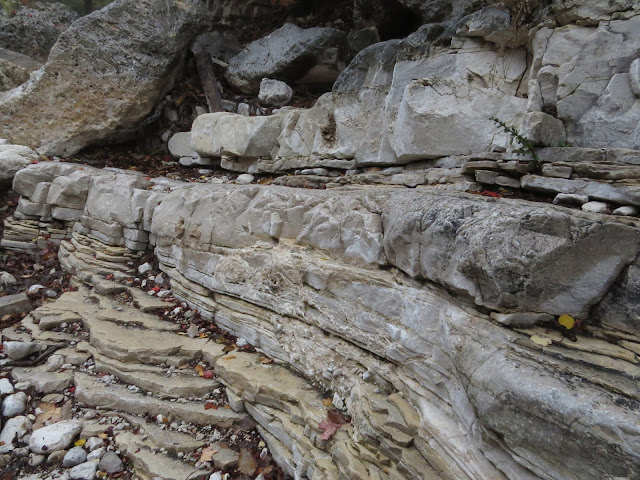 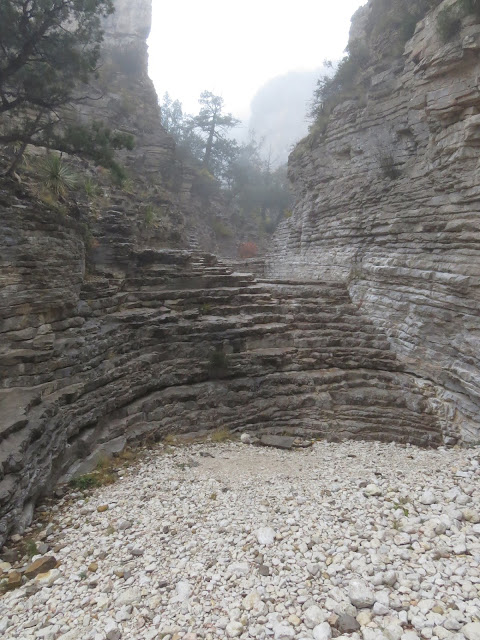 And just like that I was at the Hiker's Staircase which marks the beginning of Devil's Hall.

By the way, this feature, half again higher than I am tall, isn't quite as stair-like as the photo implies.

Climbing up the wet, narrow series of ledges wasn't too bad. I let both my hiking-sticks dangle from their straps and all-fours-ed my way up. But coming down was a whole 'nother issue. A whole 'nother scary kind of issue considering how steep the drop and narrow and slickery-wet the ledges were. And that's not nice soft cotton-candy down there at the base!

But after coming this far, and still breathing - sort of - (Dang! I wish I lived at a higher elevation!)  I was determined to at least stick my nose into the Devil's Hall to see what it was about. 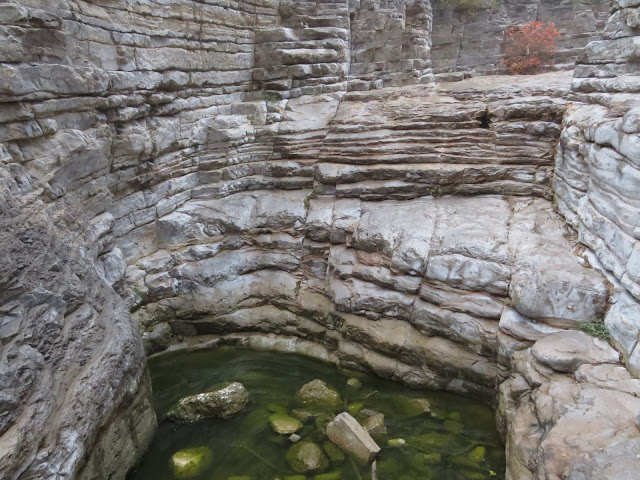 After climbing that initial obstacle this is what I was faced with. But scary as it looks, it turned out to be fairly easy to negotiate that ledge over there on the right. 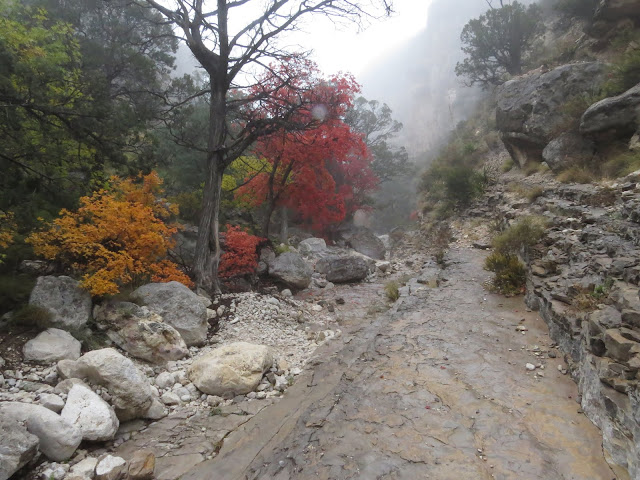 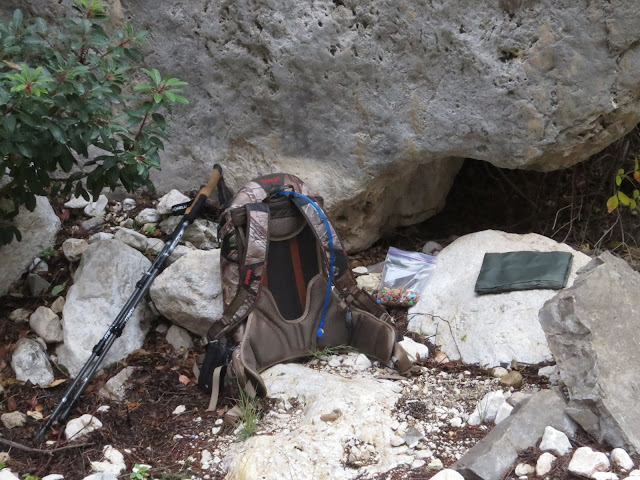 tailor made for lunch. 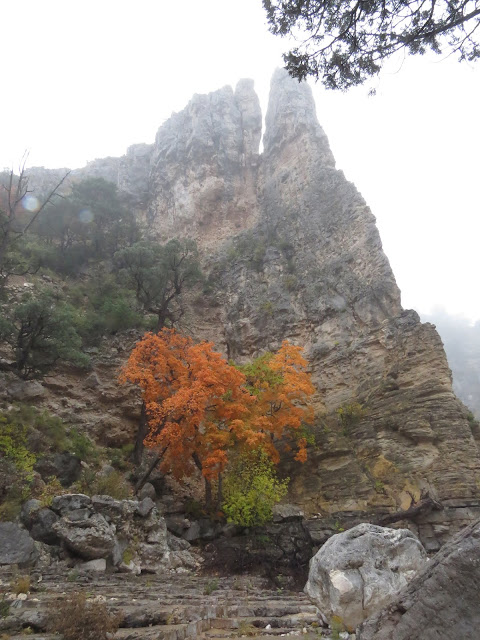 From here I spent a wonderful hour just watching ghostly images of my surroundings appear and disappear as un-felt breezes nudged the clouds this way and that, 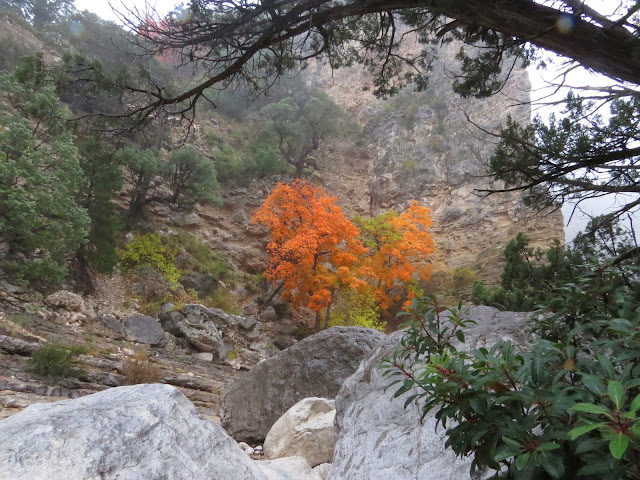 as I snapped photo after photo while I put off climbing back down those "stairs" at the entrance to the hall. . .