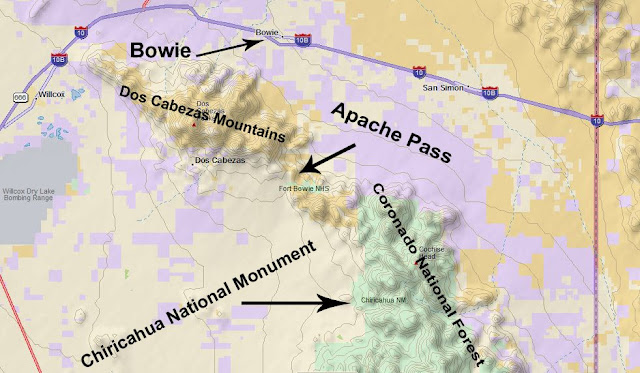 After getting blown out of Apache Pass like a hapless tumbleweed that couldn't find a fence to latch onto, I headed on towards my next destination, the Bonita Canyon Campground in the Chiricahua National Monument.

With the campground being in a wooded canyon I had hopes that the wind would not be as much of an issue there, but I was taking a chance in trusting that I could drive up blind and nab one of the 100% reservable sites at this 24 site campground.

Last night I had gone onto reserve.gov while at the rest area and found that site 22 was available for the next two nights, but then discovered that somewhere along the way my account had gotten screwed up and the system wouldn't let me log in to actually reserve the site.

It took over two hours for the e-mail to be sent to me - and then when I attempted to reset my password with the provided link - several times - it told me there was an error and I would have to try again later.  A second 2 hour wait for a fresh link yielded the same results. . . and by now it was way past dark and getting too damn cold in The Van to stay up any longer, so I gave up and climbed under the covers for the rest of the night. 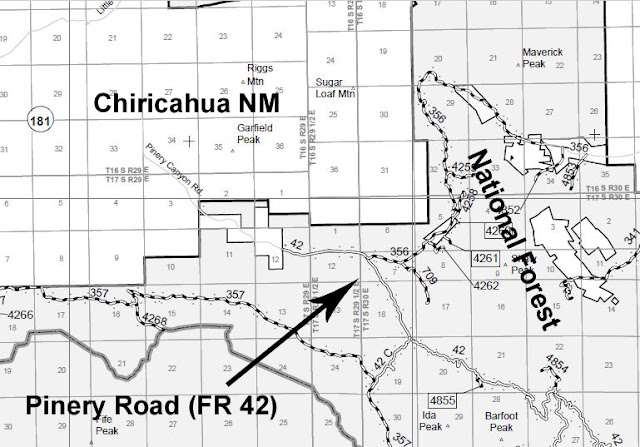 Oh well, If the Bonita Canyon Campground is full I can go around the corner to the adjacent Coronado National Forest where the MVUM (Motor Vehicle Usage Map) shows that dispersed camping is allowed (those little grey dots on either side of the road) along Pinery Canyon Road, also known as FR 42.

Generally speaking, the Forest Service road numbering convention is that two-number roads can be handled by most vehicles other than low-slung sporty jobs and those too big for the averagely skilled person to be driving anyway, three-number roads are OK for average sized high-clearance vehicles, and four-number roads are getting iffy and may be limited to 4X4's.

Of course this is highly dependent how long ago it rained (The fact that FR 42 is drawn as a double-line road means that only street-legal vehicles are allowed on it, not that it is paved, which it's not.) and how long it's been since a grader was run down the road. In the case of Pinery Canyon Road, I drove the first 8 or so miles of it a few days later and it was no problem as far as clearance and van-size goes, but it had the worst washboard I ran across on this entire trip, keeping my speed down below 10 MPH. And no, going faster, at least up to 45 MPH, after which I chickened out, did not smooth things out at all, in fact quite the contrary. 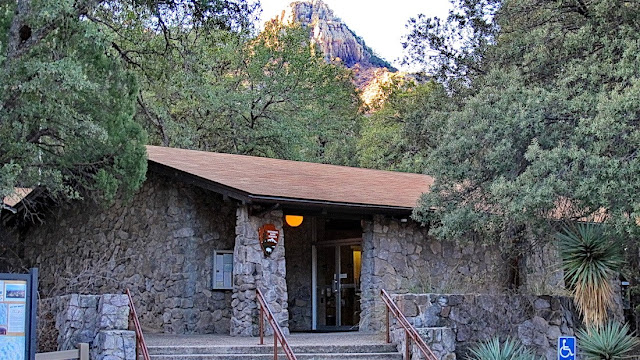 But for now I was trusting in blind luck that the Bonita Canyon Campground site would still be available by the time I got to the visitor center.

I never was able to reset my password while on this trip, nor create a fresh account since one with that email address already existed. I still have no idea what broke the account in the first place but turns out that the reset problem was Chrome. Something about Chrome broke the reset-password process, but once I got back home and had access to Explorer, and, incidentally, no longer needed to make a reservation,  the reset worked like it should.

I have no idea what tangled up the account in the first place but it let me "reset" my password right back to what it was originally, and then log in properly from the Chrome on my phone. I guess it's that dot-gov bit that screwed things up.


Fortunately for me, the site I had my eye on was still available when I got there, but I could only take it for one night because the system will not let the visitor center go beyond that one night without a reservation but I couldn't make a reser - well - you get the idea. . .

In the morning I would have to go back to the visitor center again to see if I would be allowed stay another night. Beyond that I knew the site was definitely reserved. (I was able to stay the two nights.)

At $10 the cost was the highest I paid for a campsite on this trip. Would have been $20 without my geezer pass. 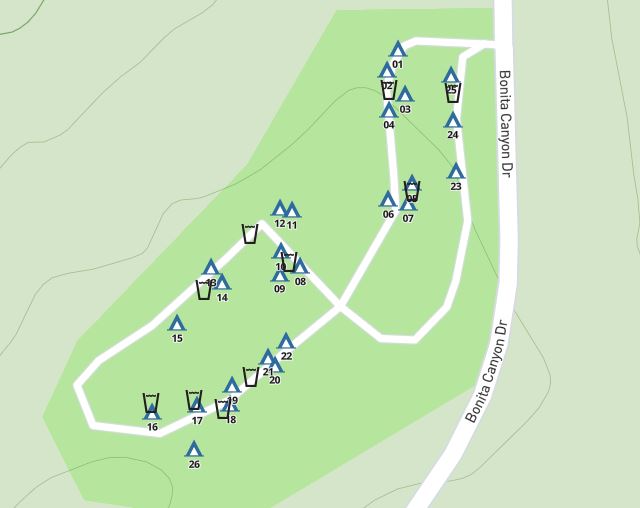 This is a typical National Park/National Forest campground in that the sites are small. In fact no rigs over 29 actual feet in length are allowed in the campground. This is in part because there is quite an abrupt dip through a wash where the two loops meet and judging by the drag marks in the pavement at the low points, even shorter rigs bottom out in here.

But also because the site sizes are limited. So when making a reservation check the site description, especially the Driveway Length, carefully.

The one above is for site 20 which , at 41 feet long, is long enough for a modest motorhome/toad or travel trailer/tow vehicle combo.

But this is the description for site 22, my site, and you can see that it is only 20 feet long, with a stove-sized bolder blocking any further progress, so don't try to get in here with any sort of motorhome other than a van-conversion and forget the trailer/tow vehicle!

I have no idea what it means when it says that Equipment is Mandatory, but this was noted on every site I checked.

And notice that Driveway Grade: Slight?  That's what it said for every site, but some were more slight than others. I did do a walk through and decided that I could use any site in there without bothering with leveling blocks, but then again I have more tolerance for being off-level than many, especially those with absorption fridges and balance issues.

There is a bathroom with flush toilets right there where the figure-8 of the campground road crosses itself, though no showers.

No hookups either, nor a dump-station, but plentiful water spigots for filling jugs. And if you are tent-camping, each site has a steel food-vault on it because - well - it really sucks when a bear shreds your tent to get at the cheese-puffs! 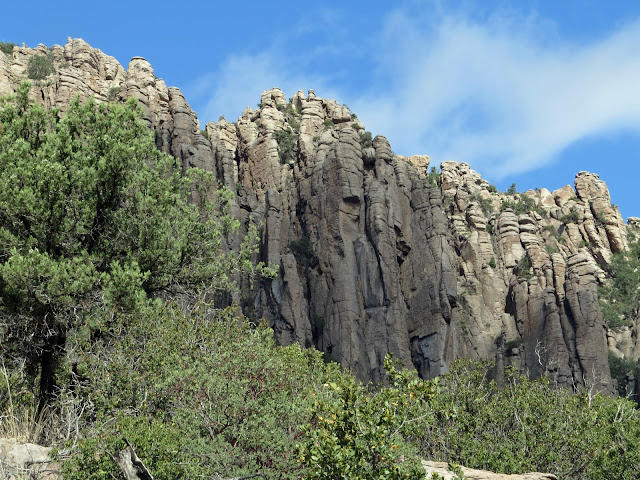 For those with small to modest rigs that are set up for a few days of dry-camping this campground, tucked here in the wooded bottom of the canyon, might just be the ticket to a pleasant little interlude somewhat off the beaten path.

Of course the Bonita Canyon Campground has one other key attribute.

The geology here, being volcanic in nature, is quite different than at Guadalupe Mountains and since it's still early enough in the day, and the clouds have cleared up nicely, and the wind isn't at all bad down here in the canyon, I'm off for a hike to take a closer look.