Gettin the Heck Outa Dodge, I mean the Guadalupe Mountains 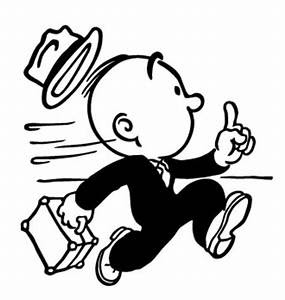 Normally I don't travel on the first or last day of a holiday for obvious reasons, but on Monday Nov 11, the actual Veteran's Day of Veteran's Day weekend, I made an exception.


I packed up my crap and got the hell out of town. 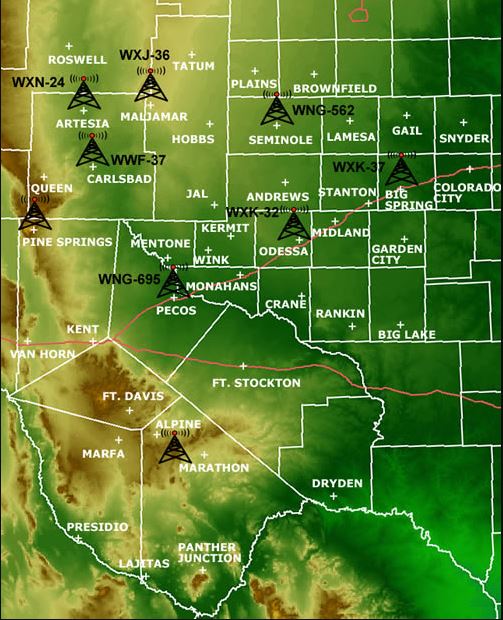 Guadalupe Mountain's National Park is covered by the Midland/Odessa district of NOAA
and even has it's own dedicated NOAA broadcast tower at Pine Springs as shown by the miniature tower there on the left side of the image above.

(Pine Springs used to be a small community there across the highway from the current visitor center but now is used as staff housing and maintenance area for the park.)

Either they don't broadcast continuously or there were several blackout periods while I was there when all I could get was static, but the evening of the 10th they were on the air and the news wasn't great. 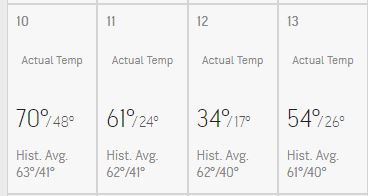 You see that 61 degree high on Monday the 11th?  Well that was pretty early in the day with the forecast calling for falling temps, rising winds, and possible precipitation as the day went on.

With forecast lows well below the freezing point it wasn't hard to figure out what some of that percipitation might end up being, and for an ex-Michigander the picture wasn't pretty.

On top of that, winds up here in the mountains don't play around. They are of the knock-you-off-your-feet and don't-travel-in-high-profile-vehicles variety.

I had already been using the chin-strap on my hat all day Sunday to keep it withing the same zip code, and finally had to give up and move inside in the late afternoon when the wind blew my camp-chair over - with me in it. . . And this was before the winds got "strong"! 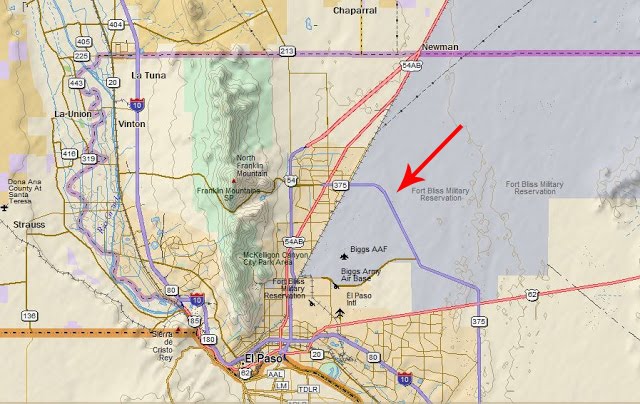 With the forecast calling for that kind of weather for two days running I wouldn't be doing any hiking up there in the mountains anyway and huddling inside The Van somehow just didn't appeal.

So I fired up The Van first thing and by mid-morning of the 11th I was at the Walmart at the corner of US-62 and loop 375 in El Paso stocking up on fuel and salad-fixins.

El Paso has always been a pain to navigate through because of congested traffic trying to squeeze through the narrow gap between the end of the Franklin Mountains and the border, and with the recent growth that has only gotten worse, so it's great news that after what seems like a decade of construction, they have pretty much completed loop 375, (There's still some ramp work going on in a few places.) allowing me to swing around the northeast side of town with a minimum of traffic hassles.

At the northern end of the loop I could continue straight ahead and cross the Franklin Mountains via the Woodrow Bean Transmountain Drive. I've been over this 1300' climb right through Frankling Mountain State Park several times in the past, but as I approached I could see a steady stream of trucks and other traffic out there above me working their way up and over I so hung a right on 54 instead, followed a mile later with a left onto FM-3255.

For a few miles this route, heading due north away from the city, is flanked by expanding neighborhoods, most of which don't show on my 2013 map, but these soon fall away and by the time I crossed into New Mexico where the road changed name to NM-213 I was back in the desert.

Not much more than a mile into New Mexico there's a roundabout at the intersection of SR-404 which I wrapped myself 3/4's of the way around to head west on 404.

I still have to climb up through a pass, or maybe it's a nostril since it's between the peaks of Anthony's Nose and North Anthony's Nose, when crossing 404 to pick up I-10, but this pass is a gradual climb/decent of only a couple hundred feet, suitable for the most underpowered of the mega-RV's.

It wasn't in my original plans, and, though the weather wasn't all bad at the moment, listening to NOAA, now the station out of El Paso, I knew that blast of cold and wind was somewhere back there behind me doing it's damnedest to chase me down, but as I approached Deming, NM I got a sudden wild hair anyway and took a 16 mile detour to check out Rockhound State Park.

I've stayed at several NM state parks ranging from the far north to the far south of the state and for the most part have found them reasonably nice places to camp,


but I can't say I was terribly impressed by Rockhound which is tucked up there under the western flank of Florida Mountains. And since the visitor center was still closed, even though it was well after the lunch-hour, I couldn't find anyone around to help change my impression.

So I backtracked those 16 miles and continued on my way. 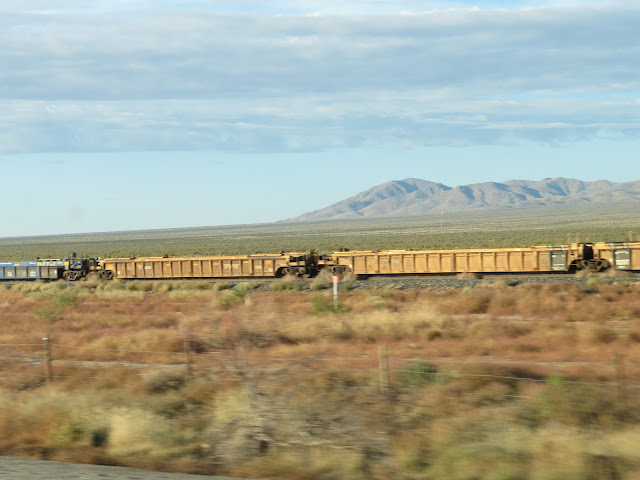 My route across New Mexico has been paralleled by a busy line of the Union Pacific railroad and my destination for the day, now that I've bypassed the State Park, is the Stein rest area just across the border into Arizona. (After living in Texas for 37 years I find it strange to be able to drive clear across a state in a matter of hours instead of days.) 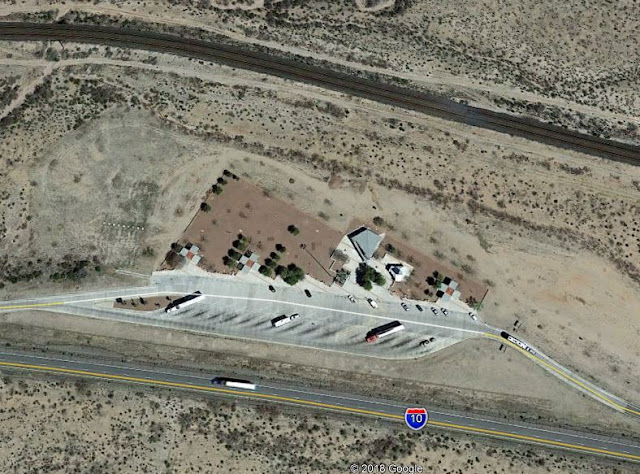 As rest areas go, with minimal separation from the highway and virtually none from the truck-parking, this one would get a passing-grade-but-nothing-spectacular-to-write-home-about, if it weren't for the fact that the Union Pacific tracks snake by just over the back fence. 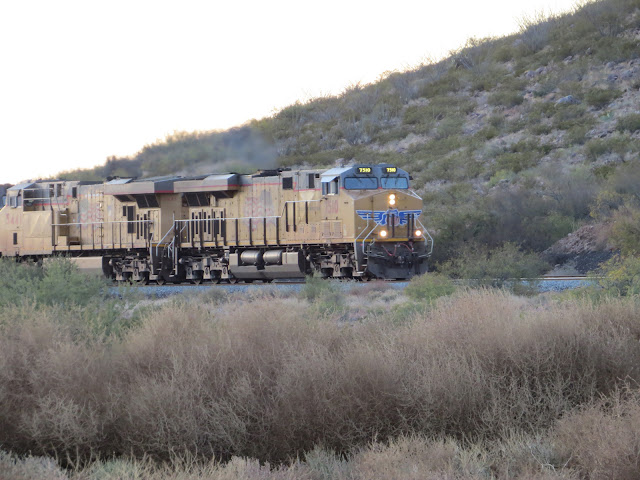 And the eastbound trains coming up the grade out of San Simon are usually powered by two or three engines on the front, 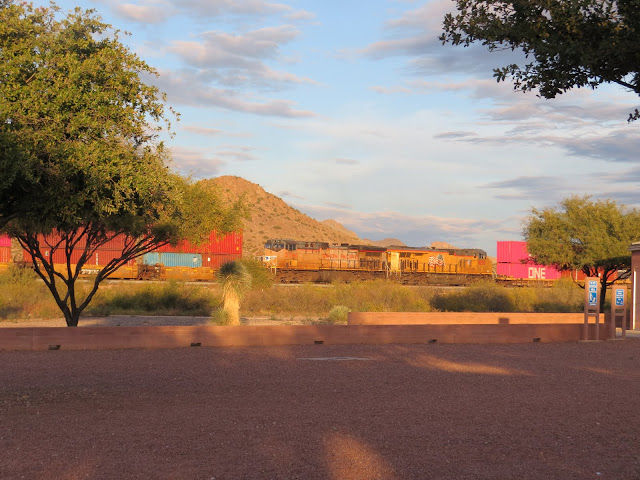 two more in the middle, and a final engine on the rear, 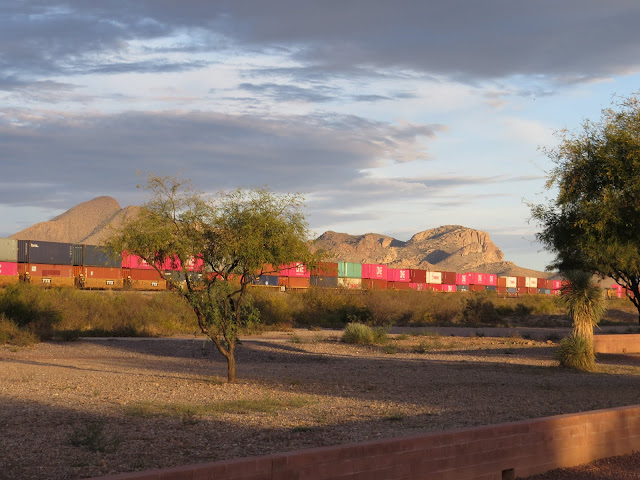 all working hard as they pound their way up and over the pass just south of Stein's Mountain back there across the New Mexico line on their way to Lordsburg and points east.

The draft-gear, the couplers, that connect the cars together, are rated for about 350,000 pounds of pull and if all the engines were lined up together at the front there would be broken couplers littering the landscape. So instead the engines are spaced out along the train (This is officially called distributed power.) all of them controlled by a single crew sitting in the first engine.

The westbound trains, heading downhill but not yet fast enough to call too seriously on the dynamic brakes, which whine pretty loudly when worked hard, drift by almost silently, which is cool too! 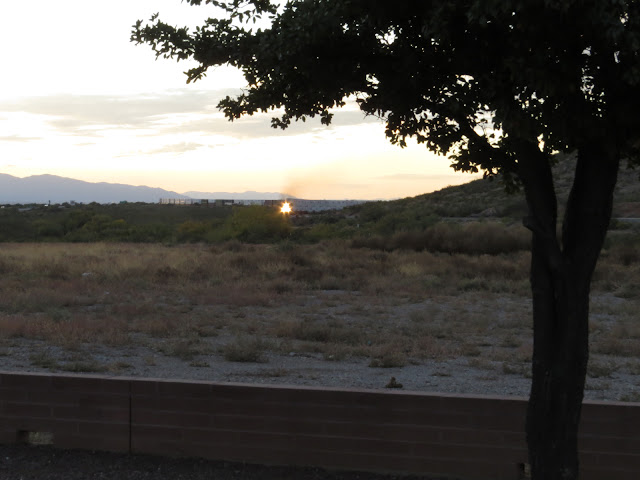 And there are a lot of trains passing here! 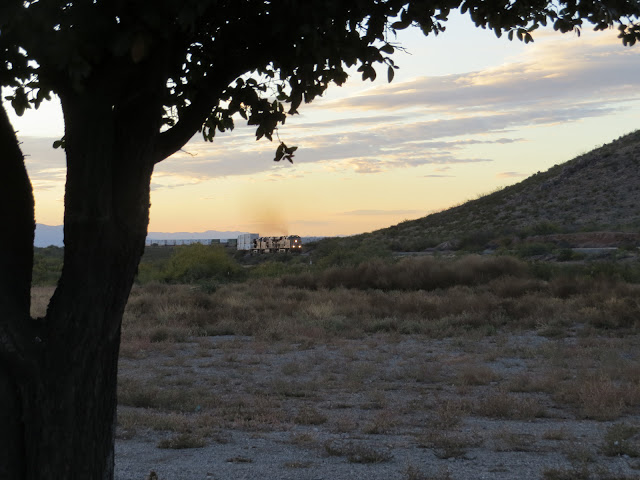 Think of these tracks as the steel version of the Panama Canal. 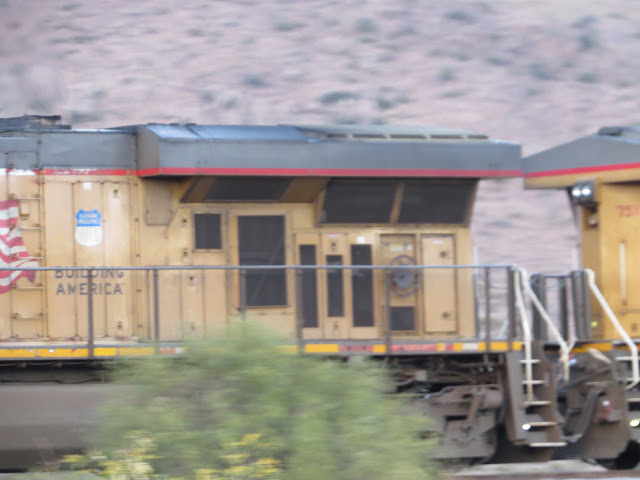 To avoid the costs of transiting the canal, many container-ships offload at the ports of southern California, have the containers shipped to Houston or ports further east via rail, and loaded back on other ships to continue their journey. (It works the other way, east to west, too) 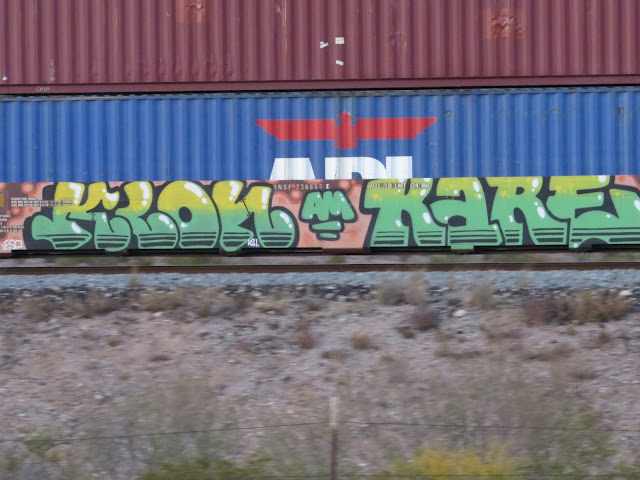 But even though these railcars are kept busy, sometimes they sit long enough to pick up some rather elaborate and well-done graffiti. 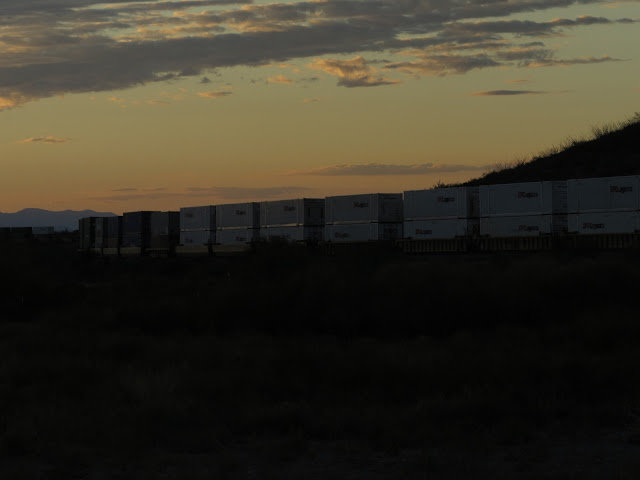 Though it was pretty late in the day by the time I arrived at the rest area, I, train-nerd that I am, still gave my camera one hell of a workout as train after train went by, 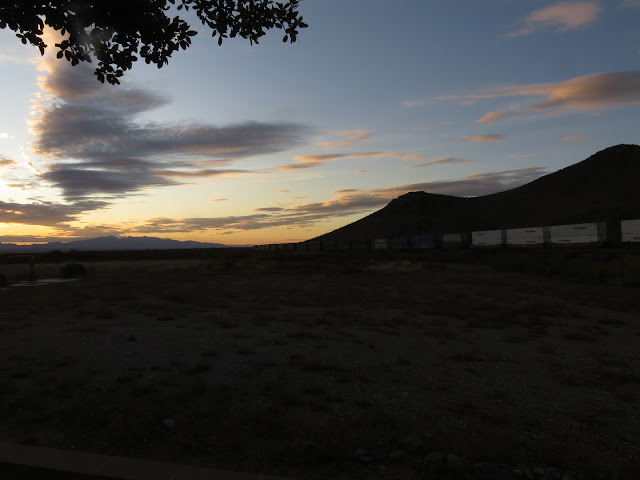 and think I have shown remarkable restraint here in severely limiting the number of posted photos.


(Yep, patting my own back, because who else will do it?)

Oh, and that weather that was supposed to be chasing along behind me?

I was beginning to wonder about that too as the evening slipped into night with balmy temperatures and very little wind.

But if you go back and look at the rest-area trees in some of the photos, notice all the leaves on them?

Well the weather did finally arrive and by morning, after rocking me somewhat persistently through the night (This seems to bother some RV'ers and I see jacks fully deployed even for overnight stops in an attempt to limit the rocking, but I don't mind.) while I slept under blanket, then blanket and sleeping-bag, and eventually scull-cap too, as the temps dropped precipitously, and by morning most of those leaves had been stripped from the trees and piled in drifts along the curbs, against the building, and behind the fence-posts.