Shoving my Nose up the Crack of Bear Canyon 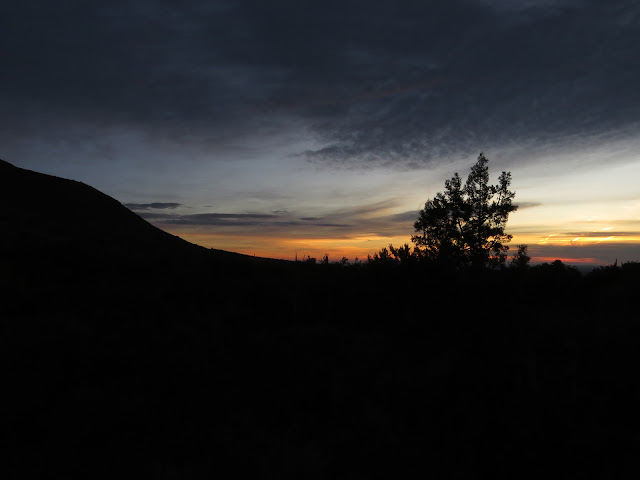 Soon it will be light enough to hit the trail!

OK. To some, those that like their sun high before oozing out from under the covers, preferably to the smell of fresh-brewed coffee, that may seem slightly perverted, but - well - I'm up and ready!

Well. . . Despite all the logic and good-sense involved, when I back down from a goal it often leaves a bad taste behind, an uneasiness stirring around in my head. And from the safety of camp, from the comfort of my chair where it's impossible to stop rethinking my decision, it often manifests itself as a sense of regret that pops it's ugly head up at the most inopportune times, like when I'm trying to pat myself on the back for the things I did accomplish.

So what am I ready for this morning? 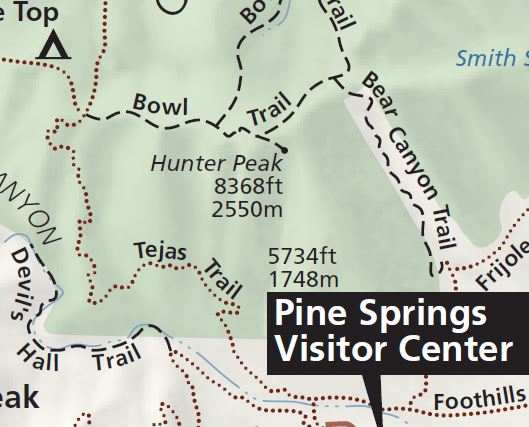 Yesterday when I slinked back down off the mountain in disgrace from my aborted loop-hike through The Bowl, a Park Service LEO was waiting at the trailhead, leaning her imposing height back against her patrol vehicle with ankles casually crossed closely watching each and every returning hiker (She was there to nab some damn fool that was letting his rather large and loud dog run around off-leash up on the Peak Trail which was scaring the crap out of other hikers. That earned him a ticket that he wasn't at all happy about, which doesn't bode well for the likelihood of him changing his behavior and following the rules in the future.) and I asked her if she was familiar with the Bear Canyon Trail.

She was, and confirmed that it is indeed steep, especially at the upper end, and going up that trail is probably a smarter move than coming down it. (OK, she may have been placating me, but it helped take some of the sting out of my retreat.)

While I'm feeling great this morning I'm not sure it's the best of ideas for me to attempt the full loop-hike all over again today, (Yep! Responsibility, or at least the excuse of responsibility, is already putting the brakes on the day's activities.) the other way around this time, but my curiosity has been tweaked so I'm just going to poke my nose up the crack of Bear Canyon from the lower end and get a closer look at it. 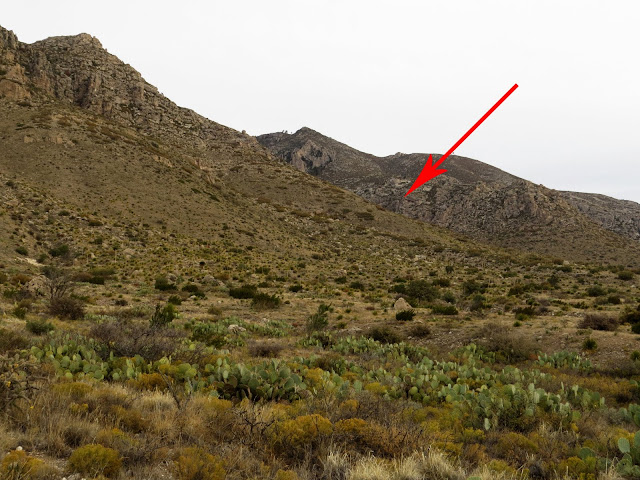 After about three quarters of a mile of hiking, despite the flat light of an overcast day that makes it difficult to pick out distant details, I can see the location of the canyon there in the fold between the ridges. 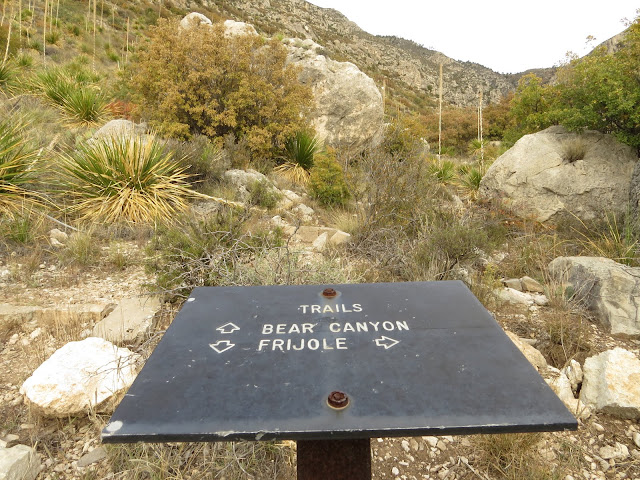 At the mile and a half mark I come to the base of Bear Canyon Trail for the second time in a handful of days, only this time I turn up instead of to the side. 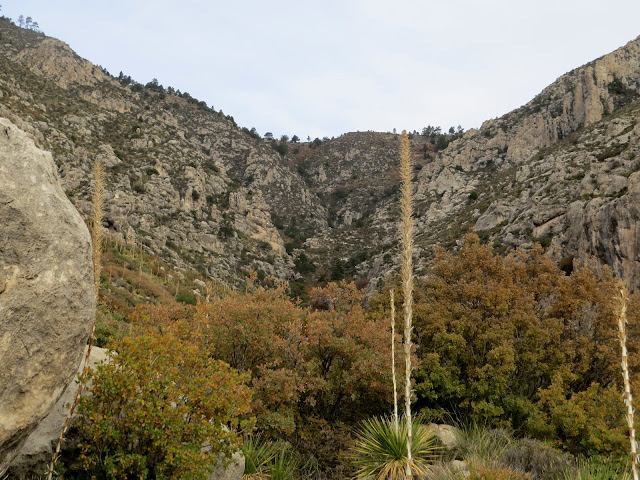 Yes, I've been here before, but now I'm going up instead of past, so with this new perspective I zoom the camera in to take a closer look.

Holy Moly! No matter which way you shake the box, when the pieces fall out that's a long way up in  a big hurry! 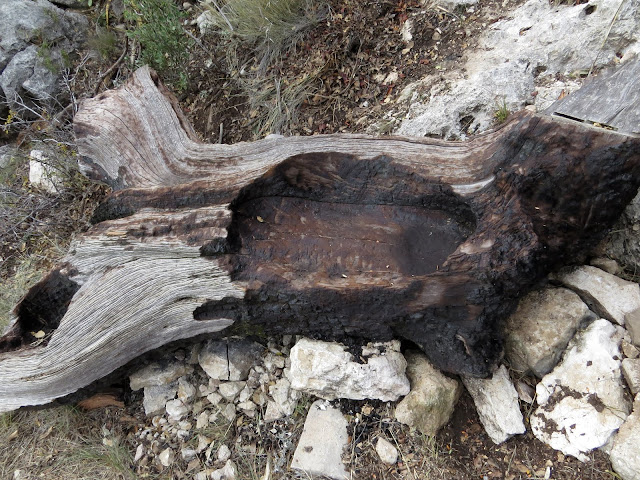 Trying to find solace in the knowledge that this was purely an exploratory probe, I pushed the trepidation threatening another early-abort down to somewhere near my belly button and moved-feet.

I had just barely started my way up the canyon when I came across this convenient bench carved from the remains of a fire-ravaged tree. But the trail, even when it's scary, at least in the imagination, is a demanding mistress (Aren't they all?! - Demanding that is.You know, mistress') 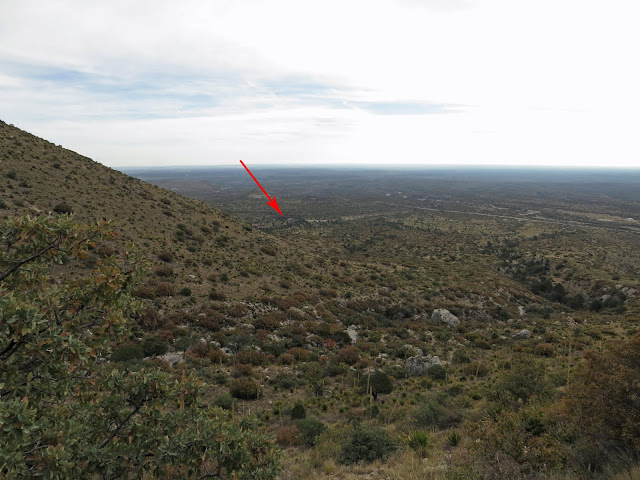 and I was soon quickly gaining elevation.

Enough elevation to get one quick glimpse of the Frijole Ranch before my view was blocked by the shoulder of the ridge forming the north wall of Bear Canyon. 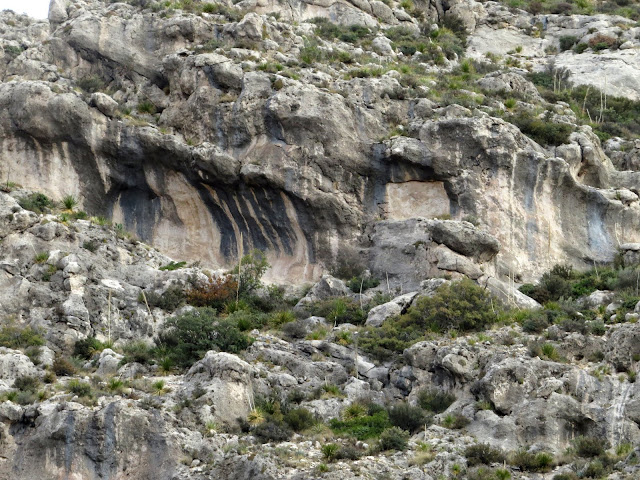 But my attention was soon diverted by this odd, almost man-made looking feature on the opposite wall of the canyon.

I'm sure somebody can explain how it came to be, but not me.

You'd think something like this would be named, but if it is I couldn't find any reference to it. So I decided, given that this is Bear Canyon and that looks a lot like the picture-window in the front of every ranch-house on the street where I grew up, to name it El Ventana del Oso. (Sounds classier than Bear's Window) Not that anyone listens to me. . . 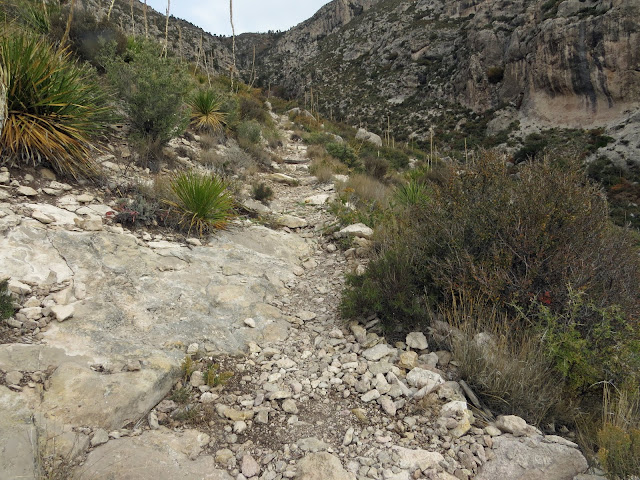 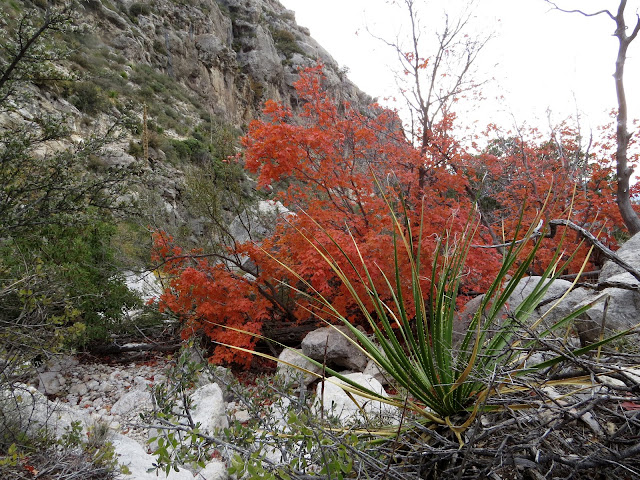 But I keep at it and it isn't long before I'm starting to get into some of that fall color again. 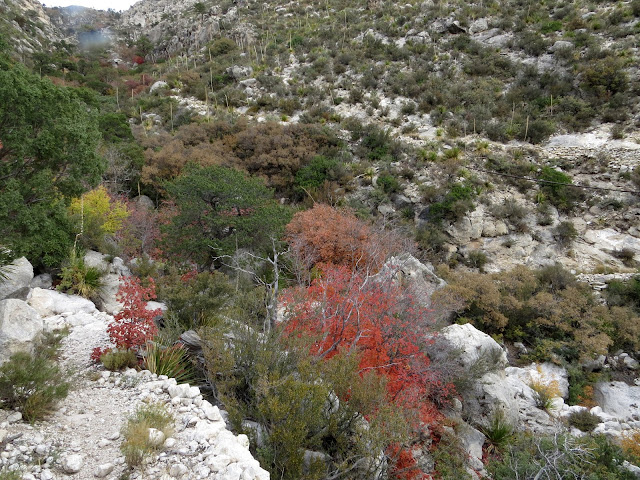 Distracted by the color, and nervously preoccupied enchanted by the mist drifting around in the upper reaches of the canyon like some nebulous being of the heights just daring me to venture into it's domain, it took me a while to notice the pipe snaking up the opposite side of the canyon.

See it there just over halfway up the right side of the photo?

And yes, that's a stacked-rock wall above the pipe.

Initially I thought that wall might be the remains of some sort of road or track that had something to do with installing and maintaining the pipe, and maybe it was at one point, but now it's supporting a 2' wide section of the trail.

If you look a little below the pipe you might be able to spot a bit more trail on which, after I give up some of the elevation I've managed to gain at no small effort on my part and cross over the wash in the bottom of the canyon, I will backtrack down-canyon a bit then switchback to get up to that built-up section of trail. 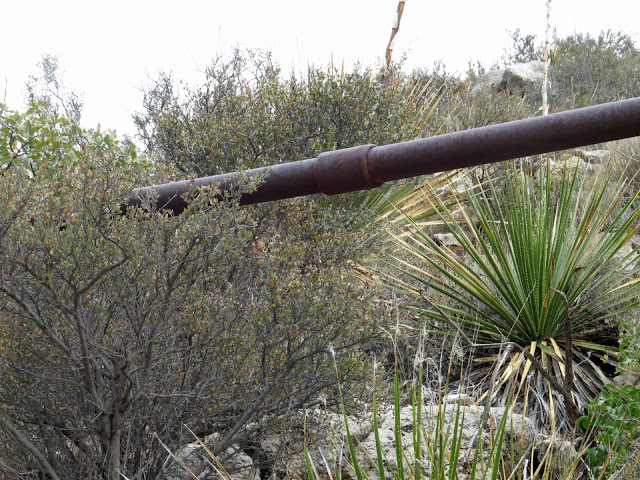 On my way there I get a closer view of the pipe. 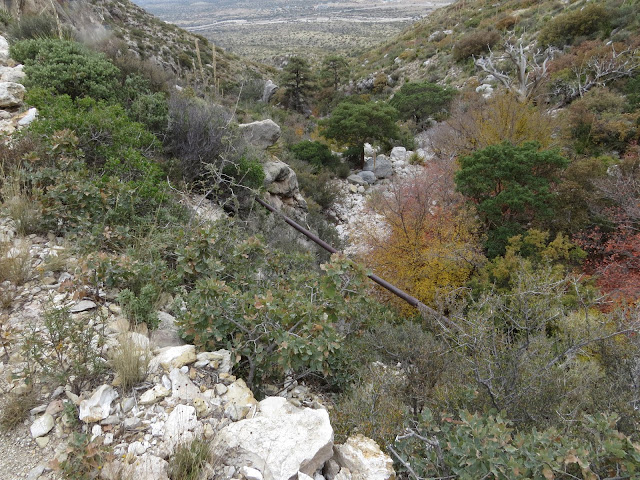 A pipe that continued to snake it's way alongside the trail and far up into the canyon. 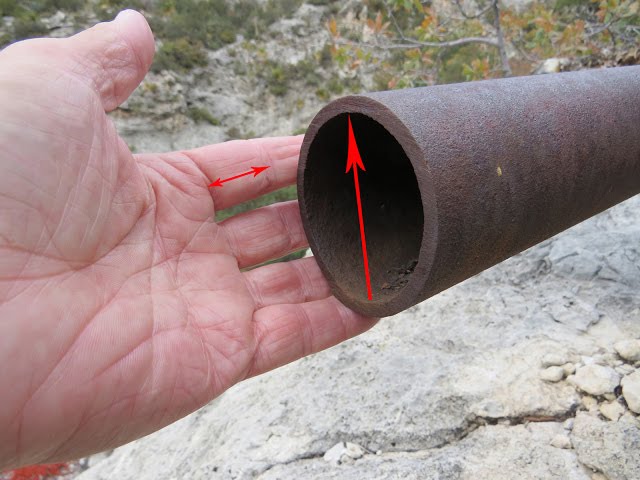 And this is no wimp of a pipe either!

Based on the 1" length of the first joint of my index finger, this is 3", heavy-walled schedule 80 iron pipe that weighs in at somewhere around 10 pounds per foot, or 200 pounds per 20' length.

Remember a few posts ago when I was waxing nostalgic about how, if circumstances had been a little different, I might have grown up on the Frijole Ranch?  Well maybe not so much waxing if this was one of the projects in those days. . . 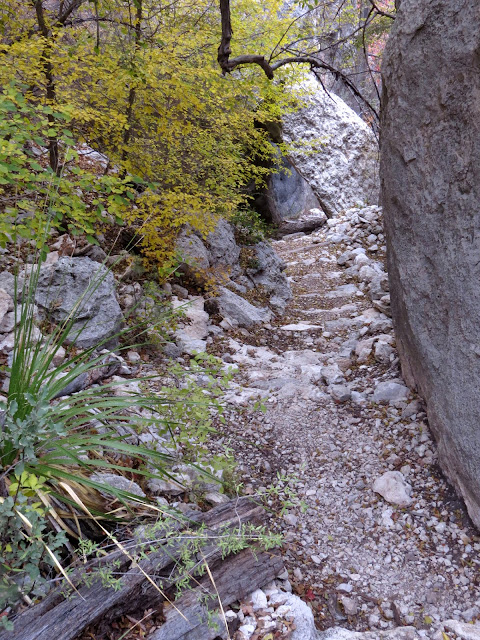 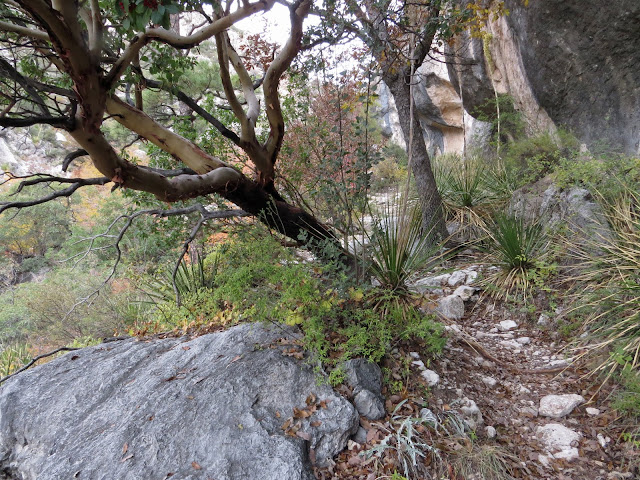 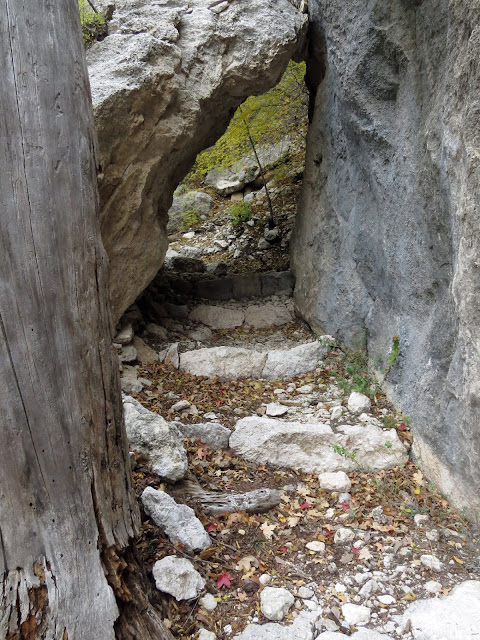 kept on going up 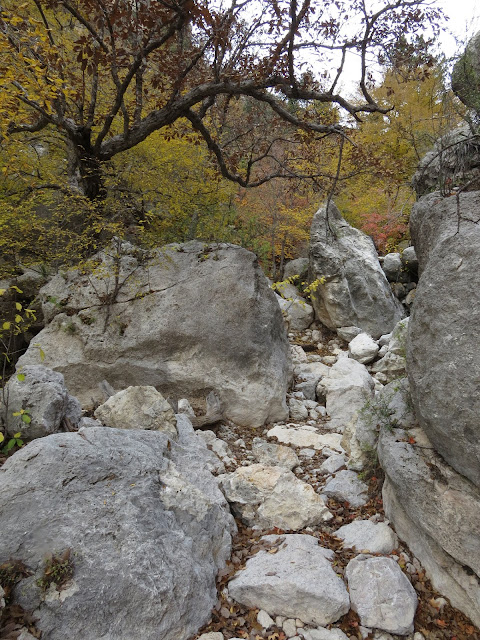 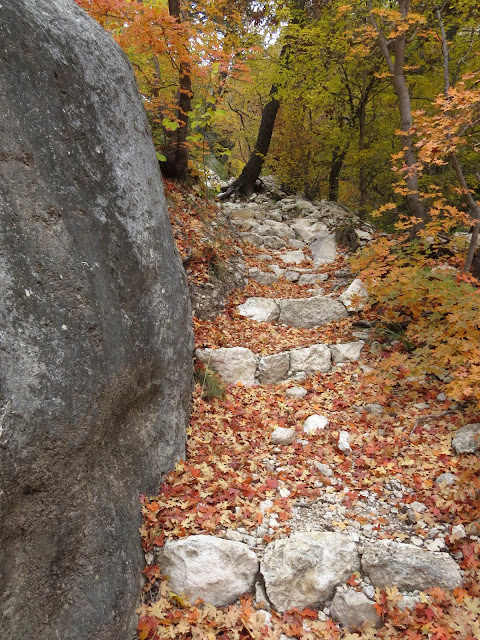 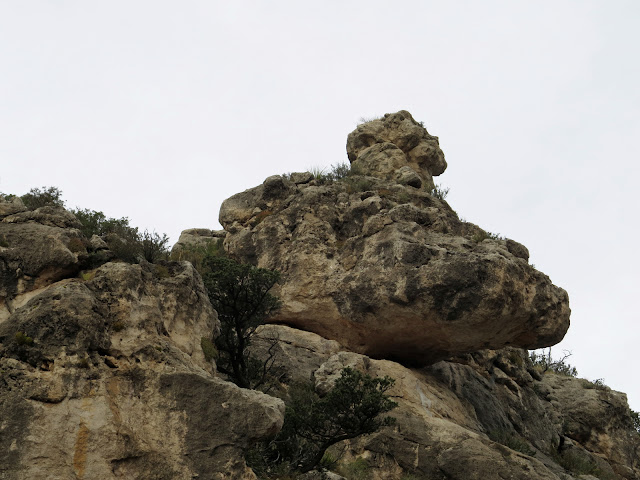 I know just how she feels up there with a permanent crick in her neck from trying to see the top of the canyon! I climbed until I reached about this point. 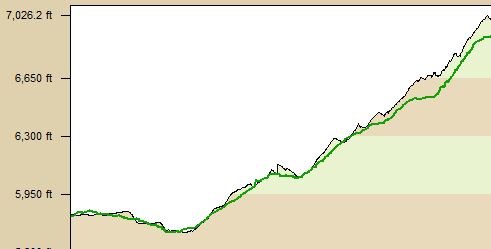 Where I had covered about 2.5 miles horizontally and climbed 1300 feet. Nearly the equivalent of 2000 steps up a fire-escape over 100 stories high.

Not all that bad actually. An average climb of 520 feet per mile. Not any worse than climbing the Tejas trail yesterday.

But even so, I'm only at slightly less than 7000' up so there's still about 1000' to climb before I get to the same level as the rim of The Bowl - which is less than a half mile away.

In other words, the remainder of the climb is about 4 times steeper than what I've been doing so far. . . 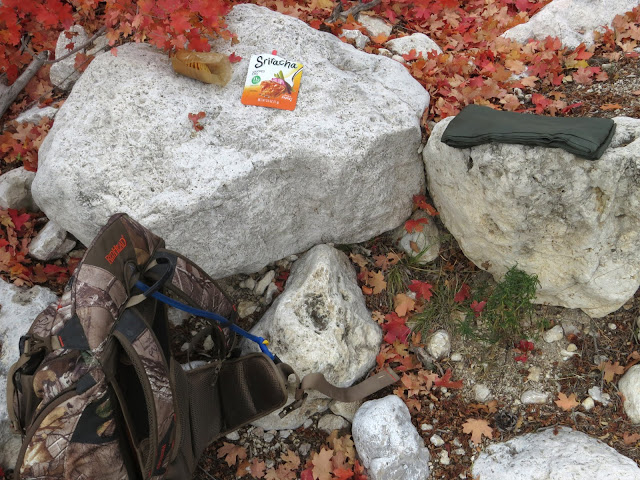 At this point, since today was always about taking a look and not about making the whole loop, (No! Honest! I didn't wimp-out because turning around was always the plan! . . . At least that's what I keep telling myself. . .) I felt justified in making an executive decision to call lunch.

And after the repast I'm going to turn around and head back down the canyon leaving that final push up the rest of Bear Canyon for another trip.

Of course for all of us, and more so for those of us that are getting on up there in years, there's no guarantee of "another trip", but then again, I am Irish, and there is an old Irish toast I like that says: "May you die before you run out of dreams."

In other words, though my bucket-list is very changeable, my plan has never been to completely empty it before I'm dead lest when I do so I - well - curl up and die. 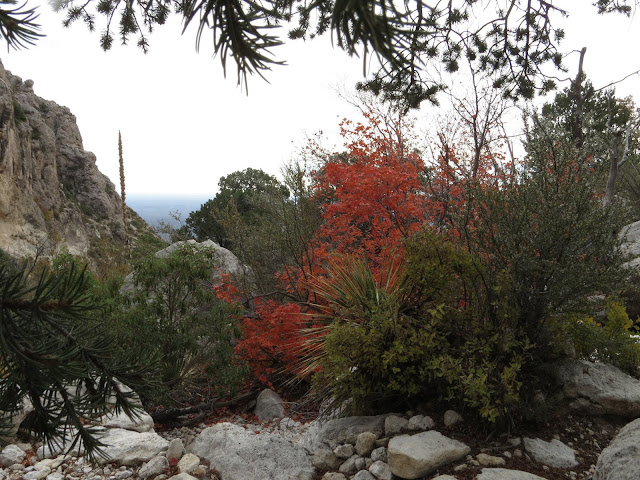 In the meantime - not a bad view while I munch my tuna and crackers. . . 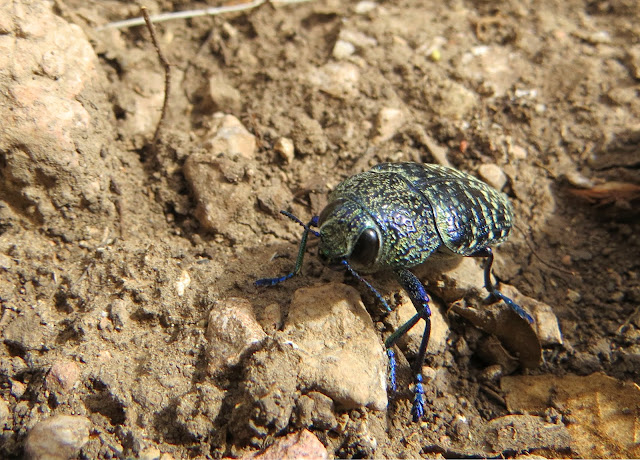 Which apparently, based on the fact that he kept hanging around, this guy wanted me to share.

(I have, with a bit of research, now identified this guy as one of a group of beetles known as buprestid, or jewel beetles. If you grow fruit trees you do NOT want to see this guy since their larvae bore through wood.)