The Wind in Apache Pass blew out my Pilot Light! 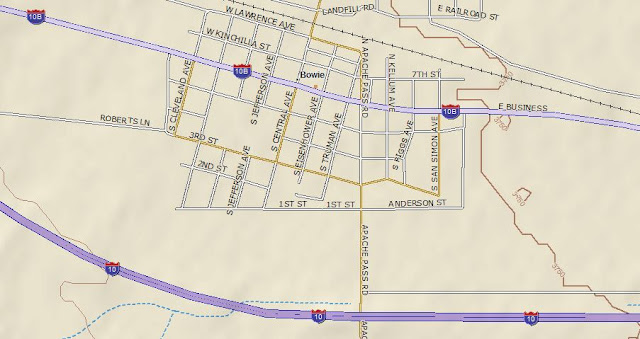 After my cold and windy night at the Stein Rest Area I fired up The Van and headed a short distance down the road to Bowie Arizona.

Actually I was headed for Apache Pass Road, but that's one of those you-can't-get-there-from-here situations.

With no exit off of I-10 for Apache Pass Road the only way to get to where I wanted to go was to get off I-10 at either exit 366 or exit 362, one end or the other of business I-10, and drive into the heart of tiny Bowie to pick up Apache Pass Road so I could take it south, crossing back under I-10 on the way.


Be aware, if you are using an app or even Google Maps to find fuel in Bowie it may still be listing the PJ Travel Center at the east end of business I-10. If you are expecting to fuel up there and buy a few guilty snacks (Who? Me?!) you are in for a disappointment as the place is shuttered up and abandoned now.

The only fuel that I could find in town is at the other end of the business loop, and on the apps it is listed only as the Mountain View RV Park with no mention of fuel, although Google Maps lists it as Dwayne's Fresh Jerky, and there is a billboard on I-10 when approaching from the east claiming "great jerky at Dwayne's Fresh Jerky, home of the world famous brisket jerky" as well as Penni's incredible pecan pie, and, more importantly for me, hinting that this is also a Shell station.

Fuel wasn't a dire need yet since I can go 400 miles on a tank without shoving the needle down into sweaty palm territory and was only 220 miles from my last fuel stop, but I didn't know the area I was heading into so the prudent thing to do would be to top up.

But I found no sign, literally, indicating this was Dwayne's let alone a fuel station. The only clue is a couple abandoned looking pumps, one gas the other diesel, (The screen on the road side of the diesel pump wasn't working so I had to swing around to the store-side instead.) out in front of a small building sitting in front of the typical parking-lot-ish RV park. But yep. Despite the lack of any sign other than for the RV park, this is Dwayne's.

Unfortunately for Dwayne and Penni, but good(?) for my waistline, (AKA the equator) I fueled up at the pump and never went inside to check out the world famous jerky nor the incredible pies, even though I like both. (Oooo, aren't I just so goody-goody-two-shoes today?!) 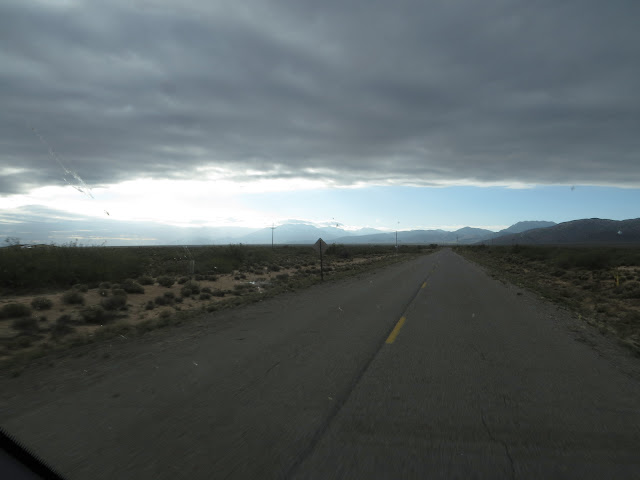 Fueled up I back-tracked a few blocks to the heart of town, hung a right, went past the National Pecan Plant just before ducking under I-10, and headed south into the desert on Apache Pass Road.

First I quickly left town behind, then almost as quickly put the pecan and pistachio orchards in the rear-view as I headed on down towards the pass between the Dos Cabezas mountains on my right and the north end of the Chiricahua (Cheery cow a) Mountains there in front of me.

It was early and last-night's front was still parked, heavily, over the area, but out there on the horizon was a hint of blue-sky. Question is, is that blue running away from me or will it let me catch up?

Apache Pass Road is initially paved, though the low-water crossing dips are abrupt and unless you want to pull a General Lee (From Dukes of Hazard? - Alright! Yeah, I'm old.)  proceeding at a grandmotherly pace is recommended. The speed limit is 40 but even that will test the seatbelt on some of the amusement-park-ride-like crossings. 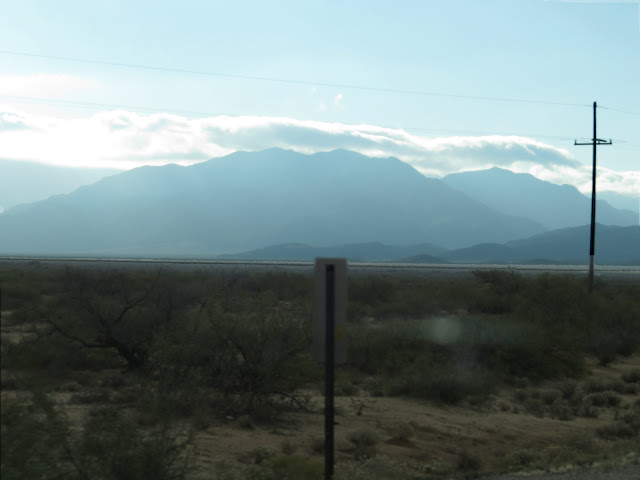 Most of Apache Pass Road is gravel and as I left the end of the short paved section and angled into the pass on gravel I was either driving out from under the front or it was dissipating right over top of me. Either way, I was starting to get a welcome charge out of the solar panel. 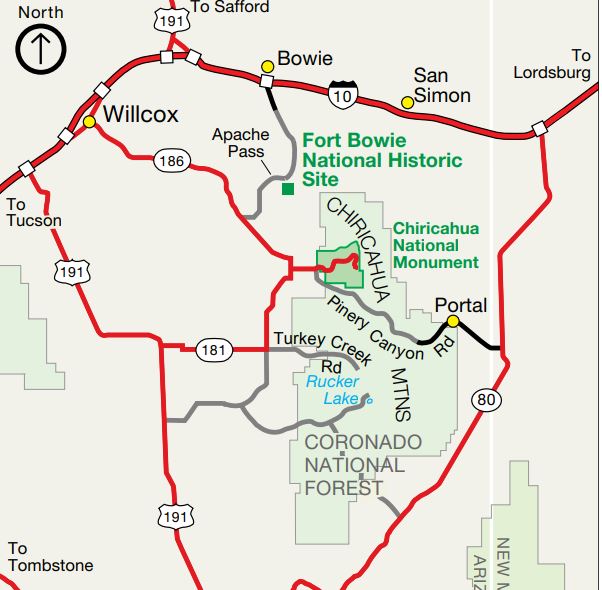 The whole point to this little excursion was the Fort Bowie National Historical Site up there in Apache Pass. 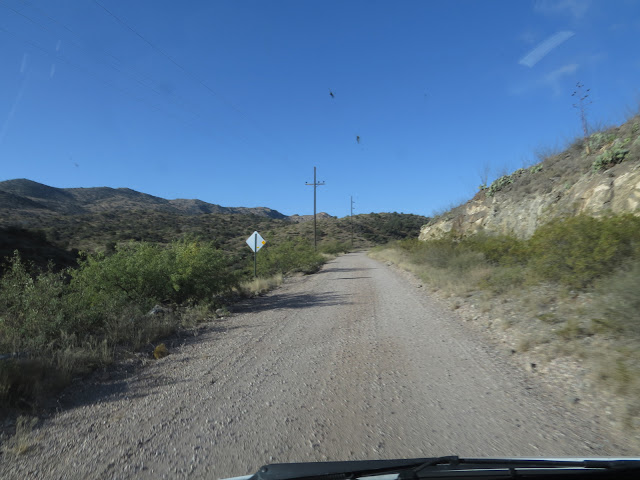 Though only about a lane and a half wide here as it works its way up into the pass, the actual pass-crossing part of the well-maintained road is only about 3.5 miles long and the climb/decent a relatively mild 700 feet, so just about any vehicle - with a running engine that is because I sure ain't pushing you up the pass! - can make it up here. 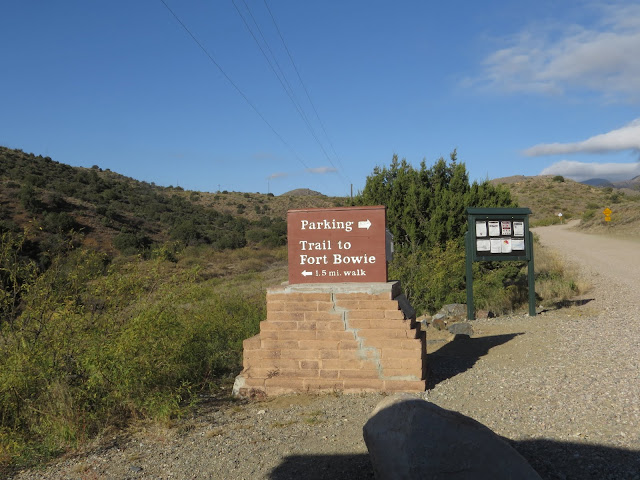 "Here" is a wide spot in the road with parking on one side and a pit-toilet, picnic shelter, info-plaques, and a trailhead on the other.

This place is a little different from most National Historic Sites in that it requires a mile and a half hike, rated as easy to moderate, from the parking area to actually reach the visitor center and the ruins of the fort. (There is a back way to drive in to the visitor center, but it's only for the mobility challenged.)

If you are here at the trailhead by 1000 (10 AM) two or three days of the week a park ranger will be here to lead you on a guided tour of the fort that ultimately ends up at the visitor center. (You are on your own coming back)

This wasn't one of those days, (Check the calendar on the web site for the guided-tour days.) but I was going to make the hike anyway.

The operative word is was. . .

I parked, climbed out of The Van, stepped out of it's high-sided shelter, the wind slammed into me, and I skidded across the gravel for several feet desperately trying not to turn into a kite.

Did I mention it was a cold wind? In case not, it was a damned cold wind! While it sucked away my heat and sent it tumbling back on down the pass I just came up I snugged up my jacket with one hand, tightened my grip on the camera with the other, leaned into the wind and bulled my way across the road to check out the info at the trailhead.

By the time I did that, looked down to where the trail crossed the wash below and disappeared behind what seemed like a very distant ridge, and snapped a few photos, the persistent and bitter wind had blown my internal pilot light out with a contemptuous little puff.

Having been raised in Michigan, playing outside all winter, shoveling the driveway during storms, building snow-forts, and yes, even tent camping in the snow, I should be ashamed, but standing there with icy drafts slicing through my innards, clawing at my rapidly retreating man-parts, and the fingers of my camera-hand already gone numb inside my gloves, I made an executive decision somewhat along the lines of "Oh to hell with this! It'll still be here next time." and clamored back into The Van, cranked the heat up high, 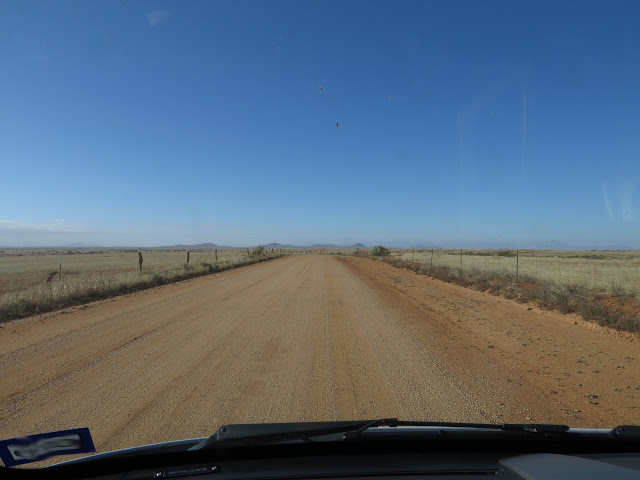 and finished the drive over the pass and out the other side - checking periodically to make sure my man-parts hadn't been permanently frosted and were slowly slinking back to their normal position.

Once in more open land on the west side of the pass the road widened, unnecessarily given the complete lack of traffic I encountered, as I made my solitary way the remaining 8 miles to SR-186.

I had a backup plan and was now on my way to either the 24 site Bonita Campground in the Chiricahua National Monument, or, failing that, (Last night I discovered a problem with my reserve.gov account that I hadn't been able to resolve, but more on that in the next post.) I'd head up nearby Pinery Canyon Road and find a dispersed campsite in the Coronado National Forest part of the Chiricahua Mountains.


Re-reading this I'm pretty sure I had more to say about today's adventure up there in the pass, but I guess the wind blew it away. . .