Cochise Stronghold Campground is nestled deep in a north-south canyon with the walls rising steeply on the east and west sides, so the sun takes its time getting down here in the morning and is quick to leave in the afternoon. 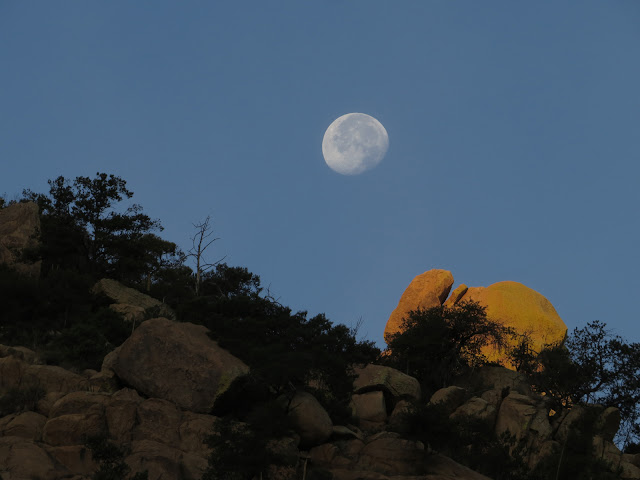 Combined with the heavy tree-cover this is not good for solar production, but it is what it is, and right now it's time to go hiking. 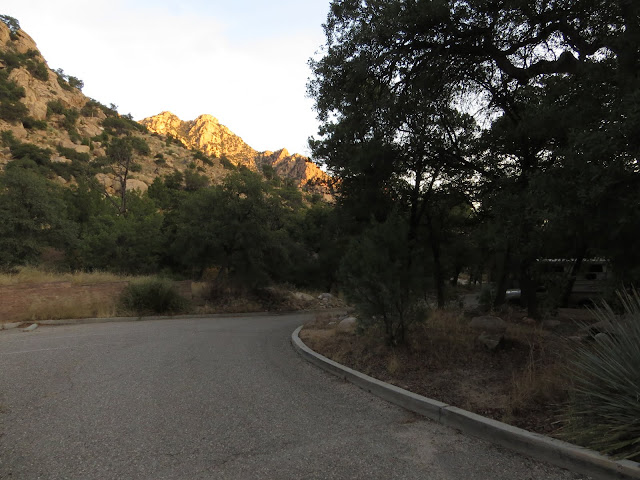 But before I hitch the pack up onto my shoulders, there can be a bit of confusion here in the campground that I think is worth pointing out.

Just off the left side of this photo, and to the immediate west of the pit-toilets, is an unmarked outdoor-interpretation area.

It's really too small to be called a trail, but by the time you've made the circuit of the 8 or so info-plaques. it does require enough steps to register on your fit-bit.

This is all tucked into the trees and there's no obvious signage visible from the loop-road, so if the guy in the next site hadn't mentioned it I would have overlooked it entirely.

Later, when I had access to the web again, I did find a single mention of this spot which is described as a barrier free nature trail. 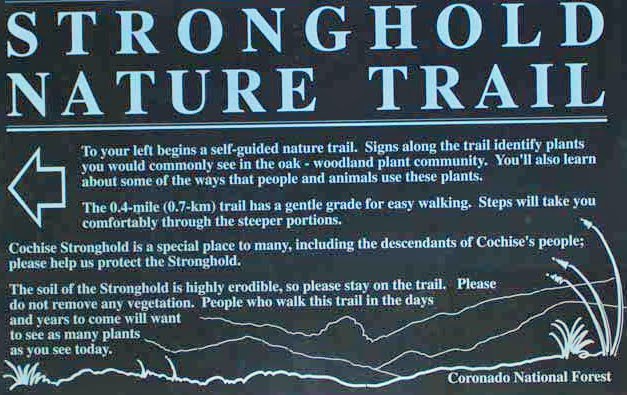 Which makes it easy to confuse with the half-mile nature trail loop that is not barrier-free and is accessed via the foot-bridge next to the east side of the pit toilets.

This completely separate trail covers the natural history and flora/fauna of the Dragoons while that first, barrier free "trail" covers the human history of the area.

Both are worth checking out, in my humble opinion anyway.

It's said that Cochise and his band used this trail to move from one side of the Dragoons to the other while being hounded by the US Army.

Originally I got sidetracked when writing the post and had a pretty wordy summary of the Chiricahua Apaches and US Army in here, but in retrospect it was just too much.

So let's just say that, as usual, when revisionist history finally gives way to facts, nobody comes off looking very good, nor all bad. 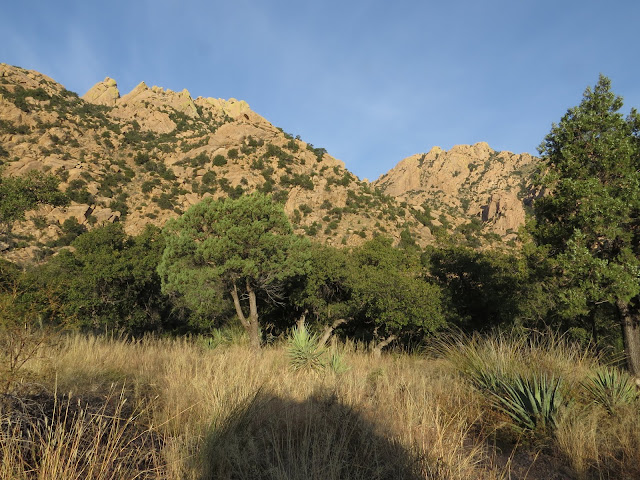 Anyway. . . Away from the accouterments of modern life, such as roads and stuff, you can start to get a sense of how productive this land would have been for the early inhabitants 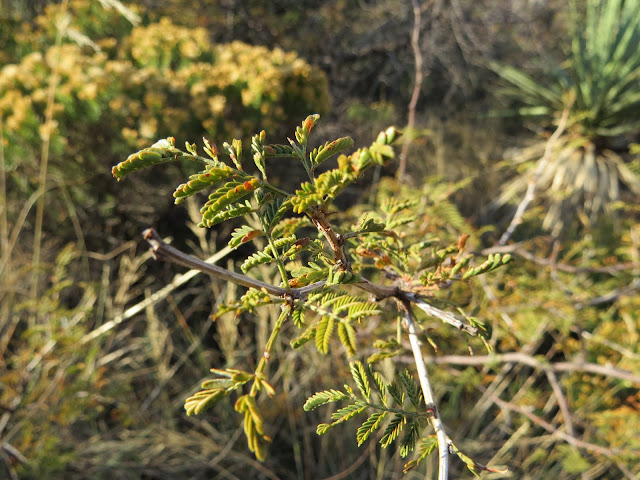 that knew how to utilize the resources. 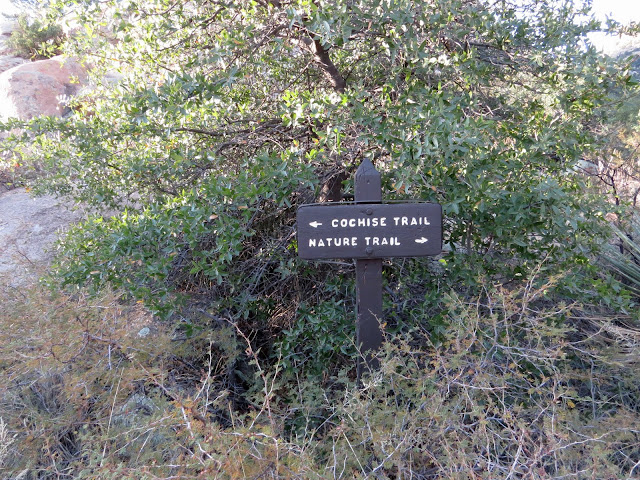 It's actually not very apparent from the loop-road, but to get to the Cochise Trail cross the foot-bridge just east of the pit toilets, hang a left and follow the nature trail about a third of the way around before hanging another left.

You're not there yet, but you are getting closer. 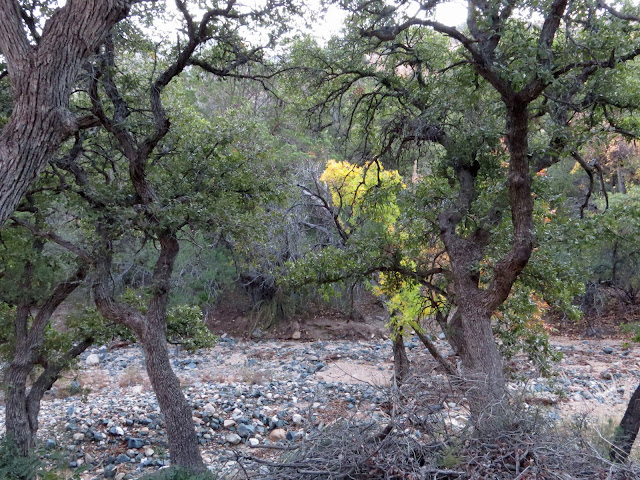 You will soon come to a wash lined with oak, cottonwood, and sycamore. 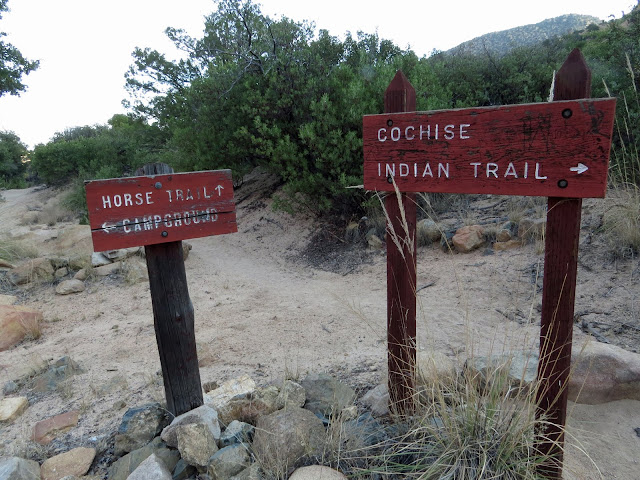 Shortly after picking your way across the wash and up the far bank you will t-bone into the Cochise trail.

Left, or north takes you back down the canyon to the horse trailer parking area, (The campground is too small for horse trailers) 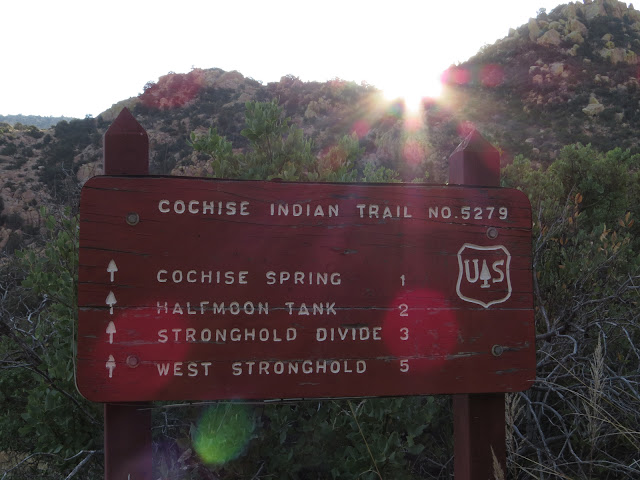 Right will take you up the canyon along the Cochise Trail.

Though the trail is well signed, these are old signs that still bear the old trail number as well as the "Indian" which has now been dropped from the trail name. Someday the budget will allow them to catch up. (Interesting [or not] bit of trivia. Many of the Navajo that live to the north of here prefer to be called Indians rather than Native Americans.) 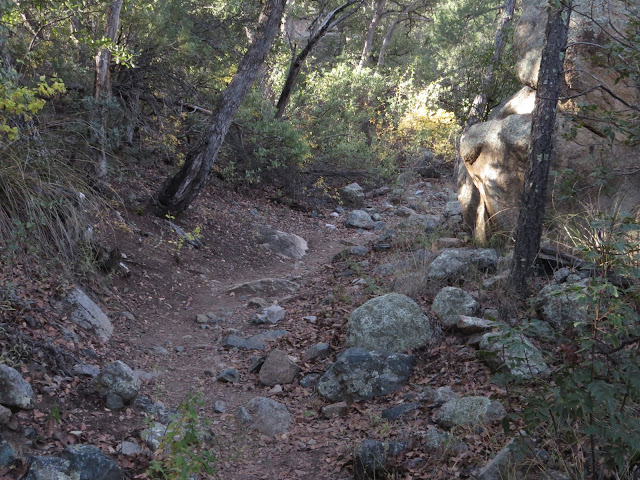 From here the trail climbs 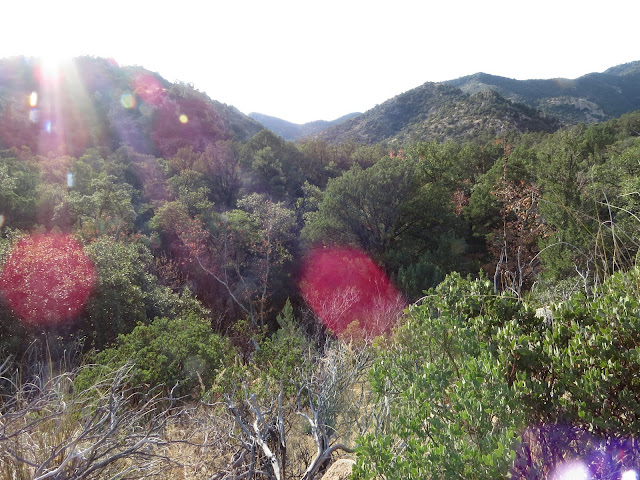 up through oak, sycamore, and juniper forest 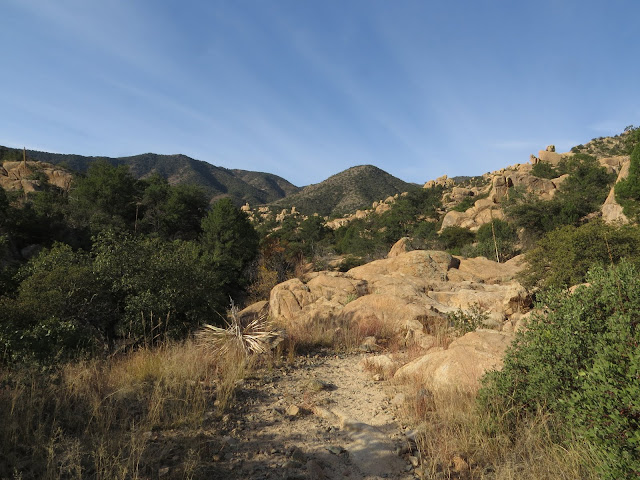 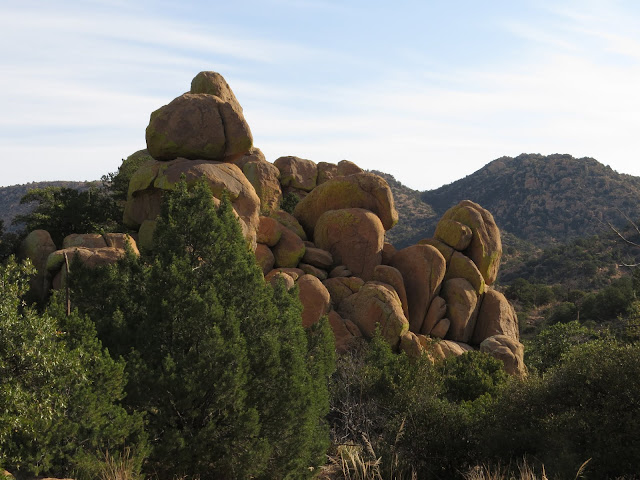 and less treed as the elevation increases 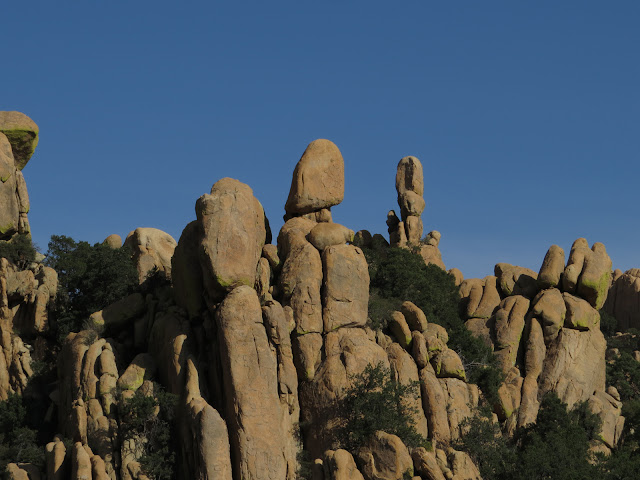 until you are in the same sort of weathered volcanic terrain that marks the upper reaches of the Chiricahua Mountains to the east. 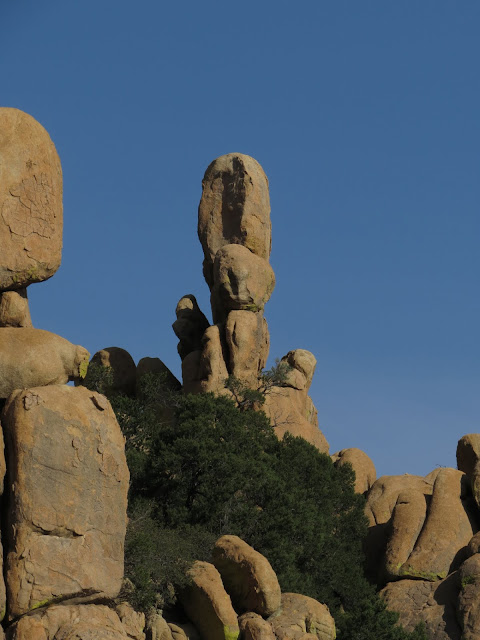 I call this guy Insecure Rabbit.

Can you see him jumping up and down shouting "Hey, look at me!  Here I am! Over here!"? 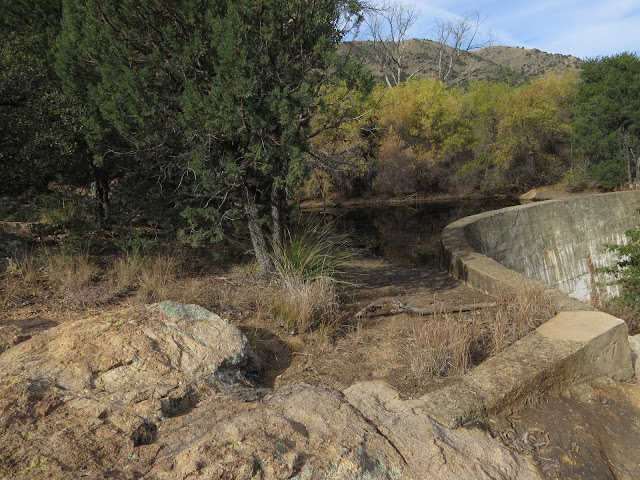 About two miles up the trail you will come across the Half Moon Tank.

I should have gotten a better picture of the dam itself, which was surprisingly tall, but can you imagine hauling all that concrete and the necessary lumber for the forms up here to make this thing?! 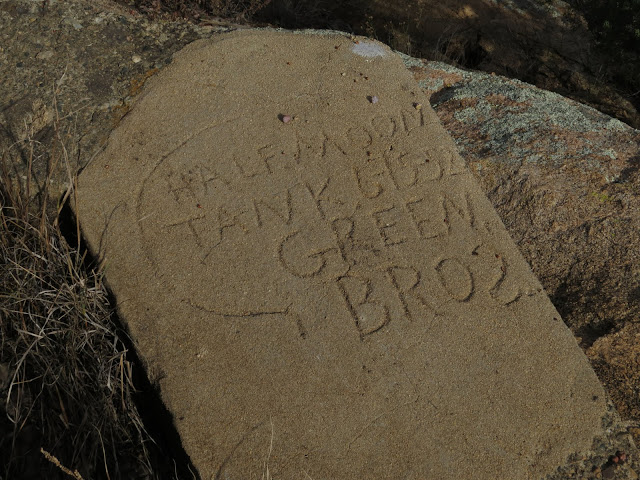 From these carvings at one end of the dam I surmise that it was built in 1952, perhaps by the Green Brothers, or maybe for them, 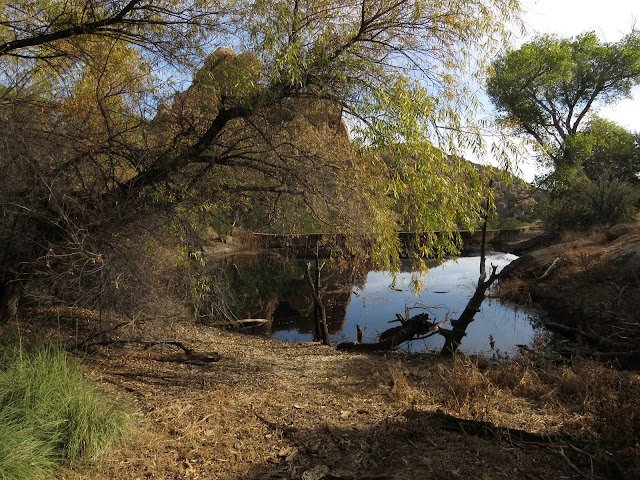 most likely to create a more stable water supply for the Half Moon Ranch, but my on-line attempts to find any verifiable history about this not-inconsiderable project were unsuccessful.

Regardless, tucked in behind the dam and well off the trail is a great private lunch spot, which I took advantage of on my way back down the trail. 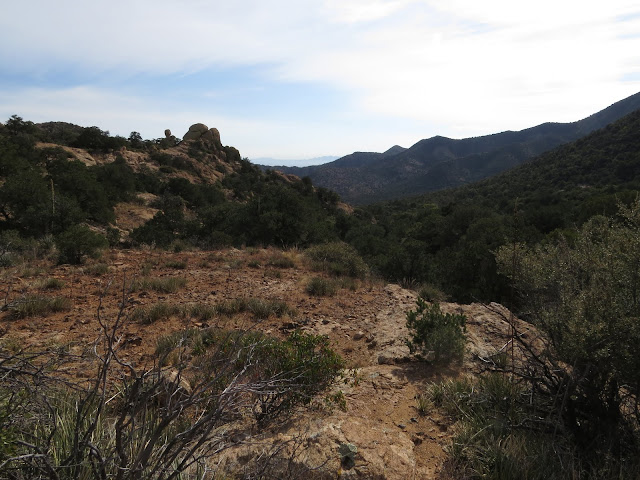 But first, it was onward and upward because the divide between the east and west sides of the Dragoons is another mile up the trail. 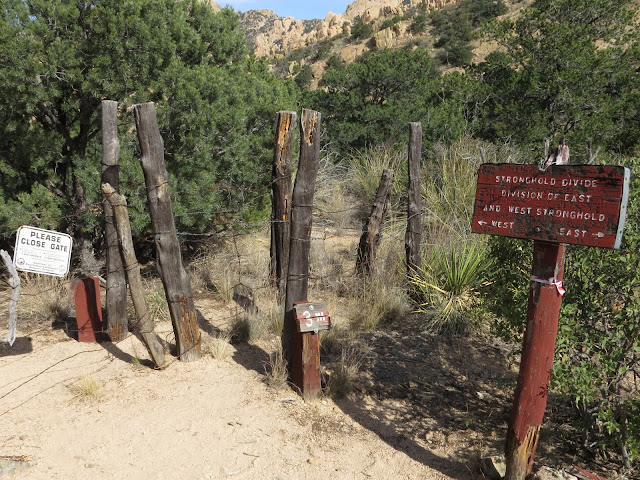 At the divide you will run into the second of the fences designed to keep livestock from wandering into areas they're not supposed to be.

Just on the other side of the fence I had a view down through the notch of West Stronghold Canyon of the Whetstone Mountains some 25 miles to the west. I also had an on-again off-again single bar of 1G reception on my phone and wrote a short text to let a fellow blogger that lives down there in the San Pedro Valley know that I was in the area. The text was like two lines long but took over 10 minutes to successfully send.

By now I was 3 miles from the campground, according to the Forest Service, 3.5 according to my GPS track, and had climbed 1000'.

A real hiker would have continued on and dropped the 900' down the steep canyon on the west side of the divide another mile and a half to where the trail terminates at the end of FR 688, which, despite being a 3 number road is usually described as a 4 wheel drive road.

From there the really ambitious can hike down FR 688 another mile or so to Council Rocks where Cochise may have sat down with General Howard and agreed to a peace. I say may because General Howards description seems to also match Slavin Gulch one more ridge to the south, but regardless, there's no disputing that scattered around Council Rocks are pictographs attributed to the Mogollon people that were in the area around 1000 years ago.

Today I was neither that ambitious, nor, apparently, a real hiker, because I turned around at the divide and started on back. The call of cheese & crackers, a good book, and a comfortable chair back at camp was just too loud today. 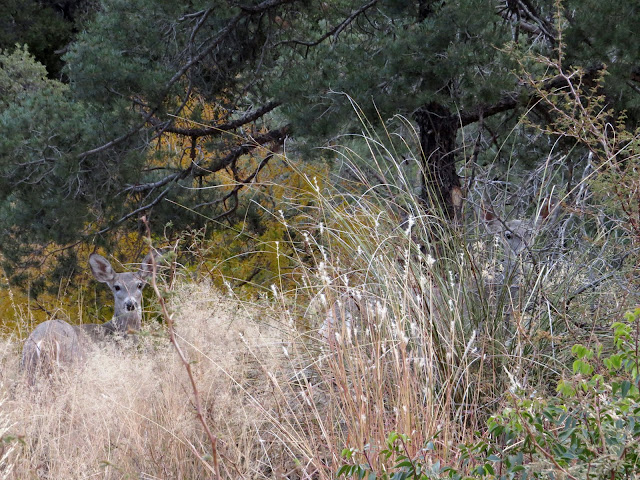 After stopping off at Half Moon Tank for a late lunch I headed back down into the forests below, but before getting safely back to camp I got the stink-eye from this local inhabitant. . .