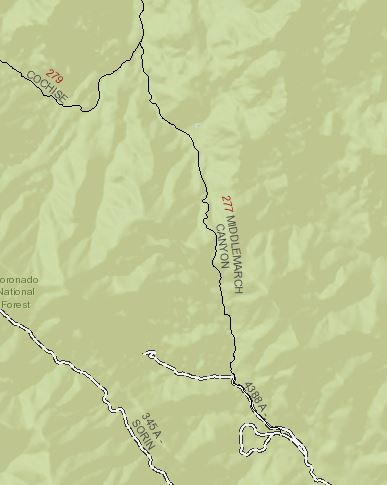 Today I set out to hike the Middlemarch Canyon Trail (#277).

To get there I hike back up the Cochise Trail for about a mile then hang a left at a trail sign I didn't bother photographing for some reason. 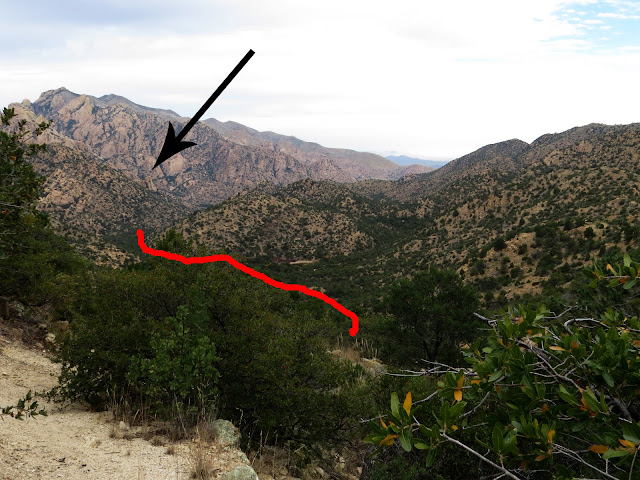 About a mile later, after gaining about 600' since leaving the campground, I turned around, facing north, and took this photo.

While the Cochise Trail curls around to the west (to the left in the photo) and goes up the canyon where the arrow is pointing, Middlemarch Canyon Trail, roughly the red line, tracks nearly due south along the eastern flank of Cochise Peak which is off my left shoulder here. 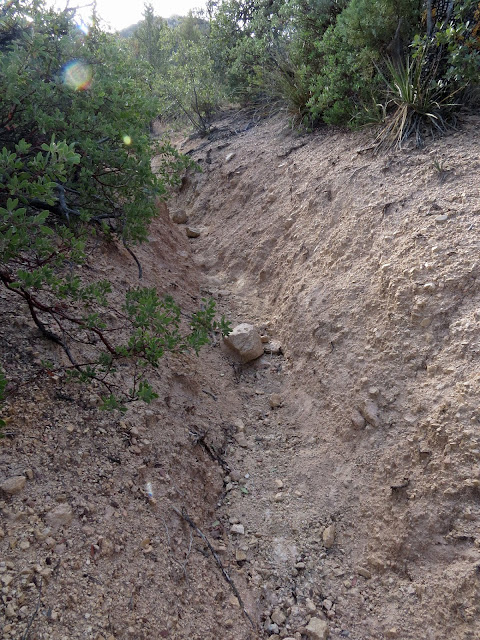 While you would expect these two trails to be similar, Middlemarch showed a lot more of the extreme wear of heavy horse-traffic than the Cochise trail did. 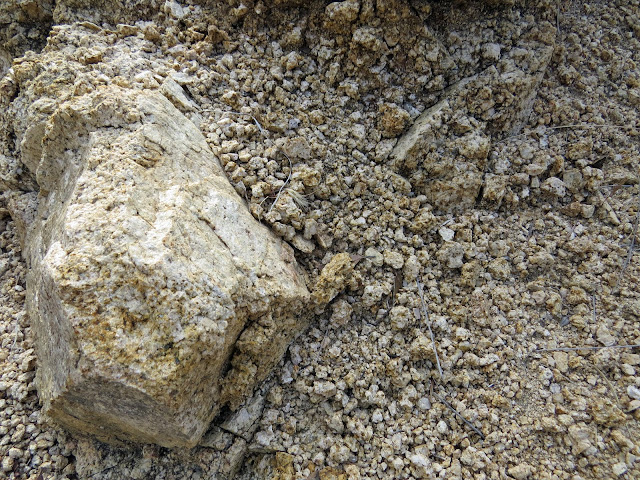 And it might just be me, but Middlemarch seemed to have a whole lot more of this sort of loose gravel that is slicker than a plastic kids pool filled with slimy marbles. 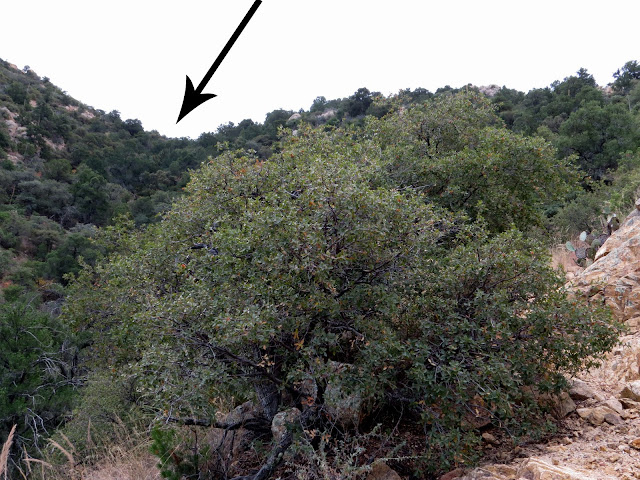 But it isn't long before I can see the notch I'm headed for, and, even though, after all the hiking I've already done, it still seems a long ways up there (Like Cochise yesterday, Middlemarch topped out at 1000' higher than the campground.) 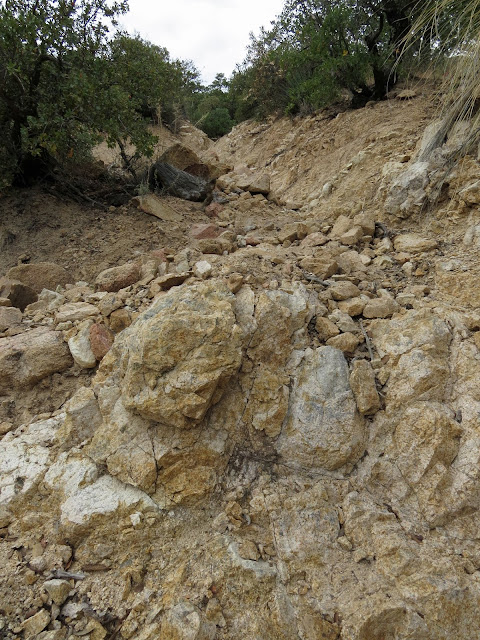 I'm inspired to continue on. (OK, I have no idea why I said that, other than the fact that since I kept going I must have had some reason or other???) 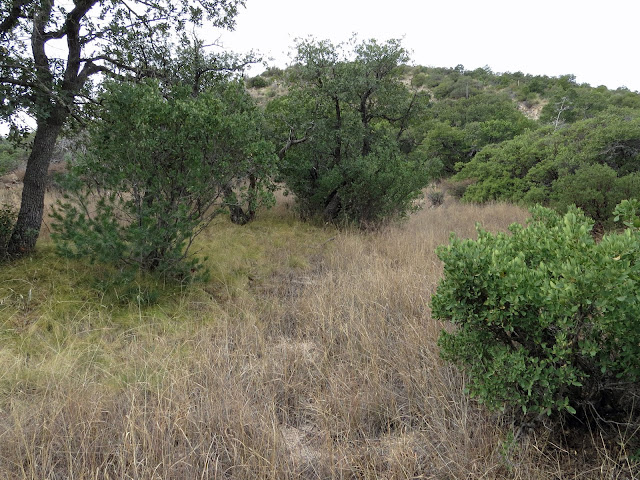 As I approach the notch the rocks ease up and it becomes downright bucolic up here. In fact I came across a spot where a crew was obviously getting ready to replace an old fence-line that had completely failed over the years, implying that livestock are roaming around up here, though I never saw any. 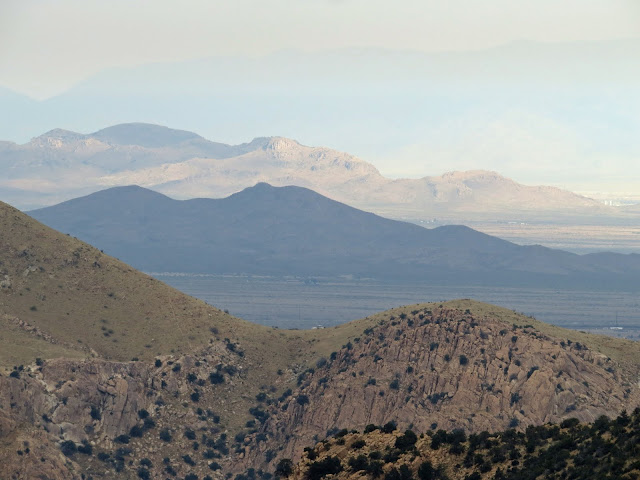 Just over the notch I came to a spot with a view to the east across Sulpher Springs Valley some 40 miles to the Chiricahua Mountains on the far side with Sulfur Hills sitting right in the middle.

But, as nice as this view is, that's not my main purpose in hiking this trail today. 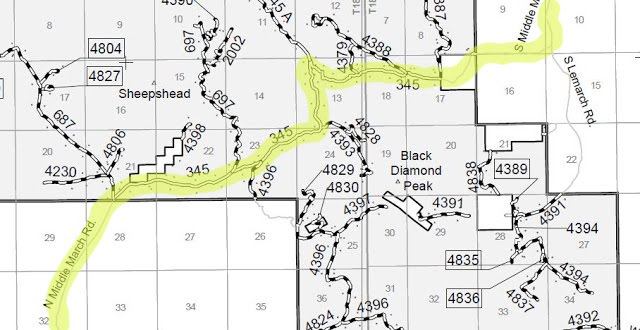 For several days I've known that when I leave the Dragoons I'm going southwest to Sierra Vista and the Huachuca Mountains.

The route from here to there with the fewest driving miles is across the Dragoons on Middlemarch Road, otherwise known as FR 345, which goes over Middlemarch Pass.

Three-number Forest Roads can be iffy for vehicles without 4-wheel drive, especially large vehicles like The Van. (In the world of RV's The Van is small, in the world of Forest Roads it's pretty damn big!) and I've been waffling back and forth on whether to attempt it or not.

One moment deciding to try Middlemarch, the next chickening out and convincing myself that when the time comes it would be eminently sensible to go around the longer way on actual highways. 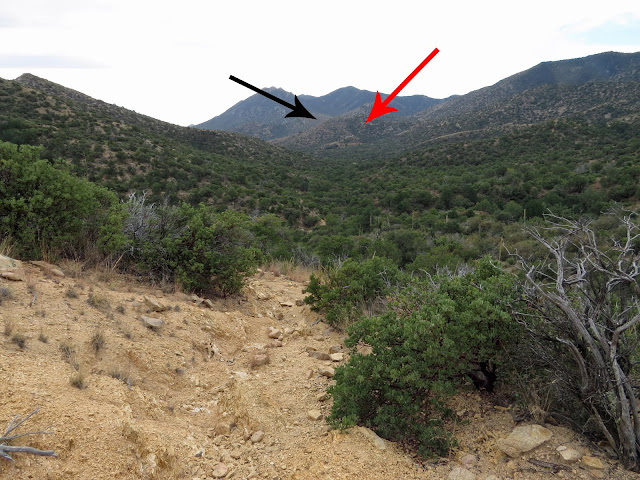 From the heights of Middlemarch Canyon Trail I will be able to see for myself what the road, there at the end of the red arrow, looks like as it climbs the east side of Middlemarch pass, which is around behind that ridge under the black arrow. 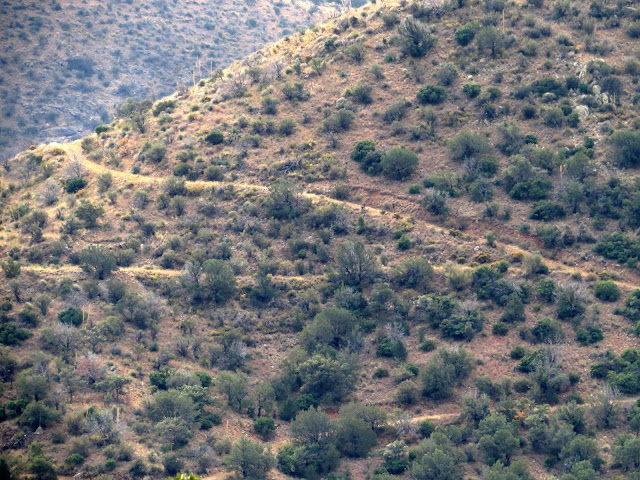 So I found myself a good vantage point, short of hiking the rest of the way down into the canyon below then up the pass that is, 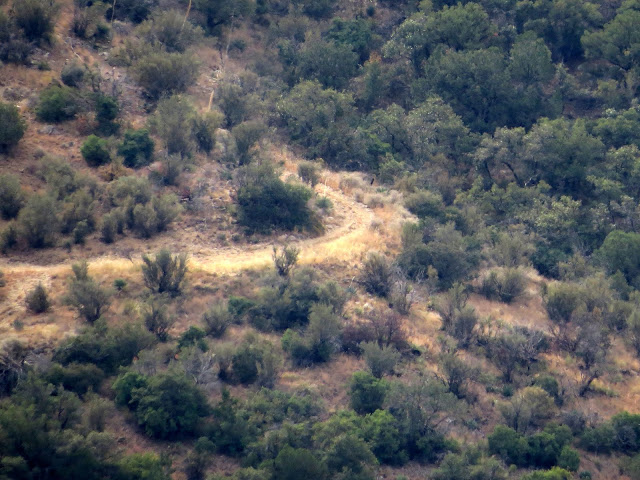 zoomed my camera in, 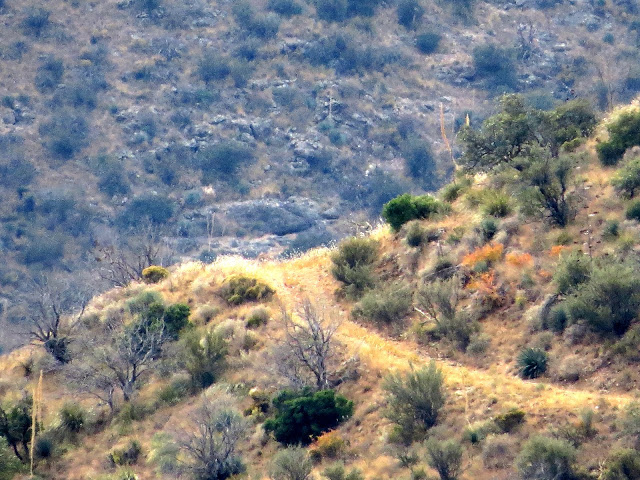 and took as close a look as I could from here.

Frankly, with the bulky weight of The Van on my shoulders, I thought the road looked a little dicey, and during that long hike back to the campground I continued to flip-flop on whether I was going to attempt it tomorrow or not. . . In that sense this hike was a bust, but it was still a great day out on the trail.