(In real time this took place back in November.)

After two nights at the Bonita Canyon Campground in Chiricahua National Monument it was time for me to move on.

Not because I wanted to mind you, there are plenty more trails here to hike, but because tonight, a Thursday, the campground is fully reserved on through to Sunday, so there's no room for me.

Oh well, since my plans are as loose as the ladies (and lads) on the corner of 6th and Congress after midnight (Eww! My first thought for as loose as involved bowels and bad sushi!) I can always come back here around the middle of next week and try out that interesting looking Natural Bridge Trail which, by all accounts, is lightly used. (OK, well that didn't work out for me at all! Seems the weather had other ideas, but I'll get to that in later posts.)

Even so, I could have hung around here long enough this morning to get in another hike, but I wanted to poke my nose down the nearby Pinery Canyon Road (FR 42) and get over to the Dragoon Mountains early enough to pick up a campsite in the Cochise Stronghold Campground, Oh, and I was in need of sandwich makings which would require a store-stop too, so I headed out first thing. 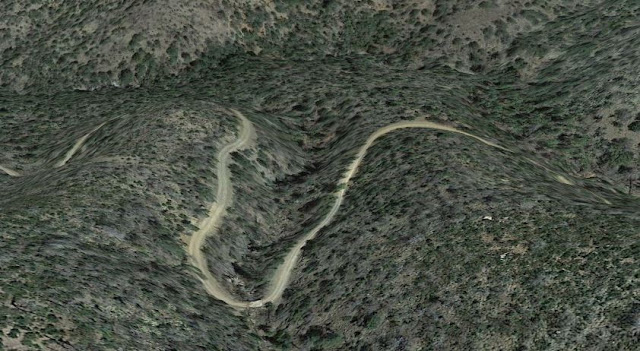 After getting my nosey-nose all dusty on about the first 10 miles of Pinery Canyon Road I came to where the road was about to drop down and wrap around so tight it might do itself harm to get across a tributary of Pinery Creek. Don't get me wrong, the road out there in front of me was certainly doable, but I had other things to accomplish and decided this was a good a place as any to turn around.

and I still had 50 miles of road between me and my next campsite as I crossed from one side to the other of Sulfur Springs Valley lying there between the Chiricahua Mountains on the east and the Dragoon Mountains on the west.

As I was following SR-181 south it made a sharp right turn. If I continued straight and took Kuykendall Cutoff Road down to Rucker Canyon Road, I could have turned back east towards the Chiricahua Mountains and climbed into - well - Rucker Canyon.

This was the site of another of Cochise's "strongholds" (I'm sure he just called them home. I'm also pretty sure he didn't call it Rucker Canyon.) and now there are a number of trails radiating out into the surrounding mountains.

But I took the right and after a while I was there, but I'm still a little confused as to where there was.

My map says Pearce but, after passing a single sign pointing to the "Ghost Town of Pearce" all the rest of them said I was in Sunsites.

Regardless, there were a lot of homes here, and a strong cell signal, so I pulled off the road and searched for grocery stores. I had the bread, mayonnaise, and other fixins for the sandwich I was craving, but had used up all my sliced turkey. (Why don't these people get together and package their foodstuffs so it all runs out together? When the turkey is used up, so is the bread, and so on.)

With all those homes I could see marching across the road-grided desert between the highway and the Dragoon Mountains, I was expecting more to pop up on the screen than a Dollar General, but the only other thing turned up by my search within 15 miles of my location  was a health-food store, and somehow I didn't think I would have much luck finding processed sandwich meats there.

Despite the accolades sung by some guy I met at the Blackwell Horse Camp a few years ago about the virtues of shopping at such places, I still think it's pretty bad when you have to do your grocery shopping in a Dollar General. . . 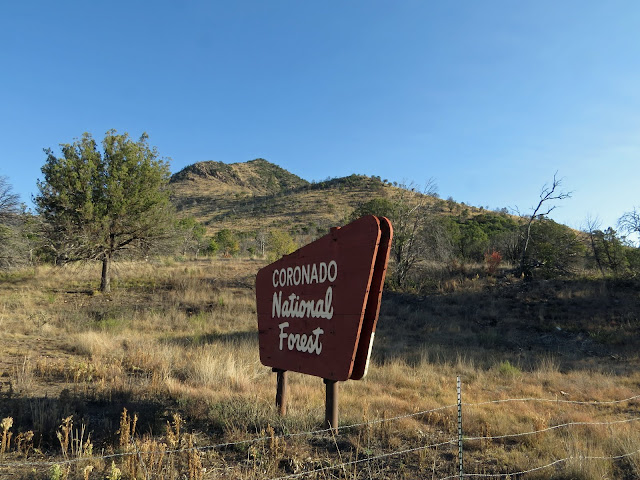 But I did, and with a fresh supply of sliced turkey (at least that's what it said on the label) in the fridge I headed west on Ironwood Road. A few miles later I came to the end-of-pavement 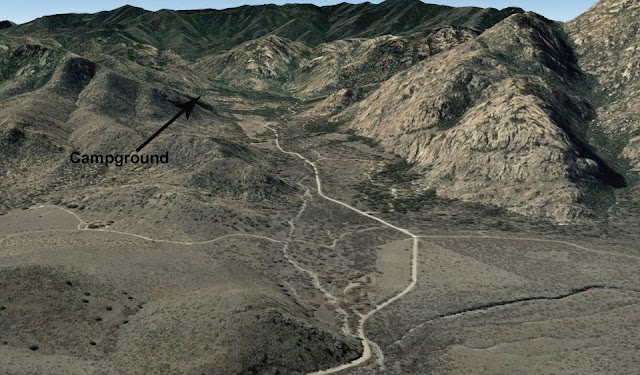 and then it was a few more miles to the mouth of East Stronghold Canyon.

From there it's yet again another few miles up the canyon to the campground. Or, in case you're not into camping, near the mouth of the canyon the Forest Service rents out the old, two-bedroom Half Moon Ranch headquarters - - - for $150 a night. - - - I didn't stay there - - -

Nobody is going to be skateboarding on the road up the canyon, but it's not all that bad either. 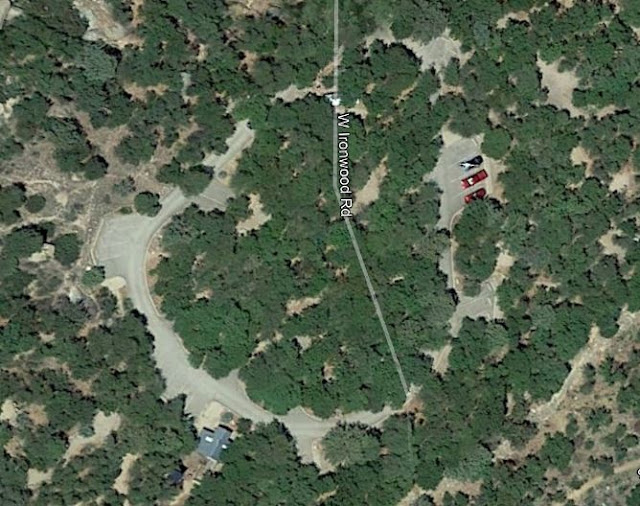 The reason I was kinda hustling to get here to the campground is that there are just 11 campsites around that loop down there - no really! they're there, just mostly tucked under the trees - and it's all FCFS.

I've found that the best time to snag a campsite in most FCFS facilities is between 1000 and 1400. Any earlier and departing campers have yet to - well - depart, any later and the competition may have sucked up all the available sites. 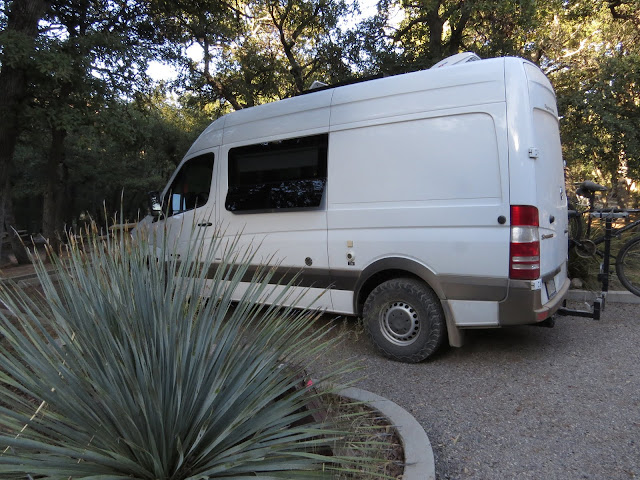 My timing was right and I got my site. With my geezer pass the cost was $5 a night, $10 without.

It was nice, though a little closer to the pit toilets and the trailhead than I preferred, but the only other open sites were two that were more suited to longer rigs and were side-by-side with no separation, so I left those for someone else. (Sure enough, a couple of larger rigs traveling together pulled into them later that afternoon.)

This campground, officially limited to trailers of 16', has pit toilets, no hookups, and no dump station, but lots of shade, which is a little problematic when you live on solar. . .

In fact, between those 2 nights in the equally shady Bonita Canyon Campground followed by 3 nights here, I was beginning to get lithium-ion envy as I dreamed of what life would be like with more battery capacity.