Back at Guadalupe Mountains; The El Capitan Hike


As I said in the previous post, weather not only chased me out of southeast Arizona, but it also threw a crimp into my vague plans to head up through Silver City and from there across to the Sacramento Mountains.

But to be honest, I'd been screwing around out here long enough that, even though Thanksgiving was late this year, I was running out of time to get back home before the hordes were released.

It may have been inadvertent, but I started this trip on a holiday, and now I wasn't too keen on ending it the same way. 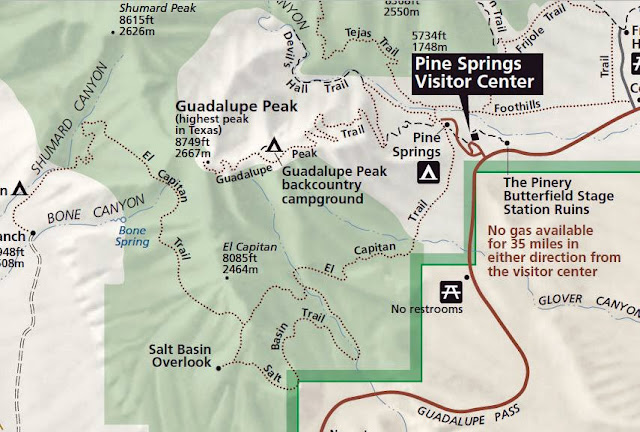 So at this point it really wasn't a great sacrifice to retreat right back to Guadalupe Mountain National Park for a couple more nights in my old campsite, site 31.

Though the sky had cleared nicely by the next morning, with no hint of the snow and ice predicted for the Sacramento Mountains a little further north, the winds, even in the shadow of the mountain, were still fierce. Bad enough that even with chinstrap cinched tight enough to leave a mark, (Though with my old-man-turkey-neck one more mark is pretty hard to see.) my hat blew off a couple of times, nearly taking my head with it!

For this reason I decided to forgo any of the high hikes, such as the peak or bowl trails, and stick to lower elevations instead.

Which is how I ended up trying out the El Capitan trail.

Despite it's name, this trail does NOT climb up El Capitan, for that you would have to take the Guadalupe Peak Trail to the end then do some serious bushwhacking along a scary looking ridge, which you will not find me doing anytime soon. Instead the El Capitan trail sweeps around below El Capitan and opens up some views around the southern end of the Guadalupes and across the salt-flats to the west.

If you make the recommended 11 mile round-trip hike out to Salt Basin Overlook that is. . . 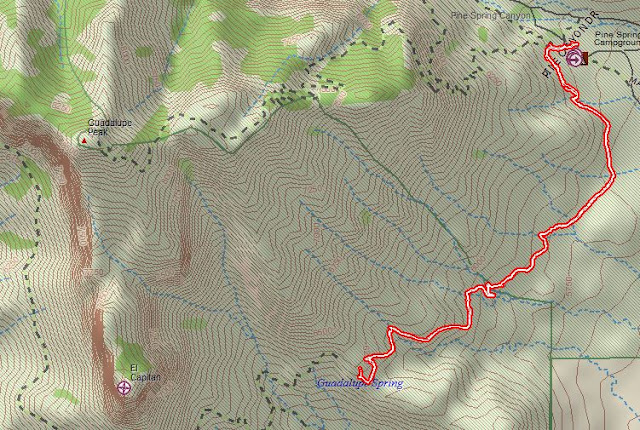 And while I was still in the campground, in the partial wind-shadow of the mountain, that was a possibility, but - well - you'll see. 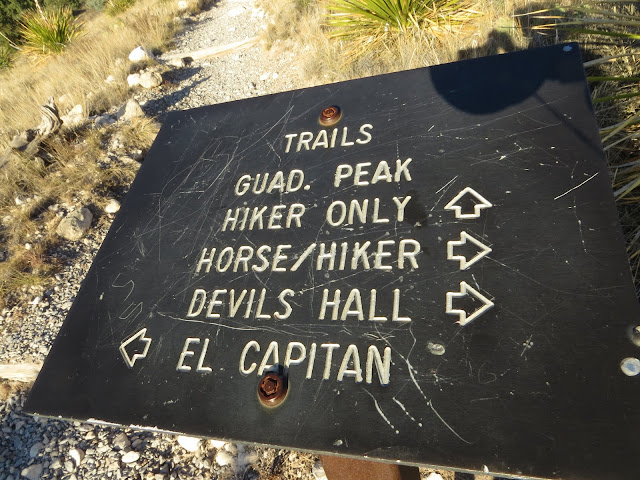 I didn't get a particularly early start this morning. 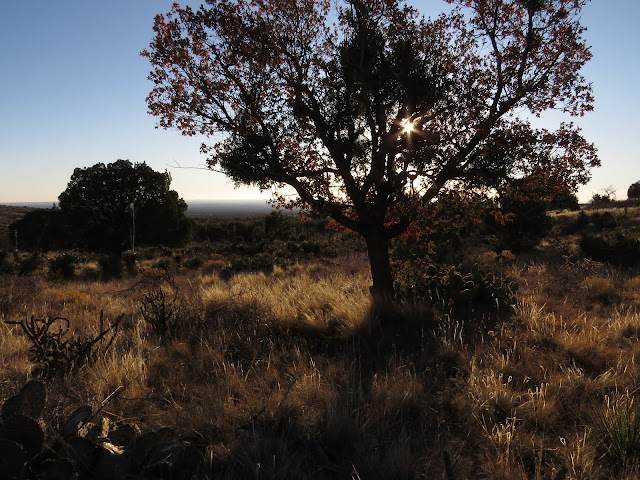 I could probably come up with a number of excuses for lazing around camp the way I did instead of getting to it, but even I'm not sure any of them are really legitimate.

At any rate, as you can see, by the time I shrugged into my backpack and slipped my hands through the straps on the hiking-sticks the sun was halfway up the trees. 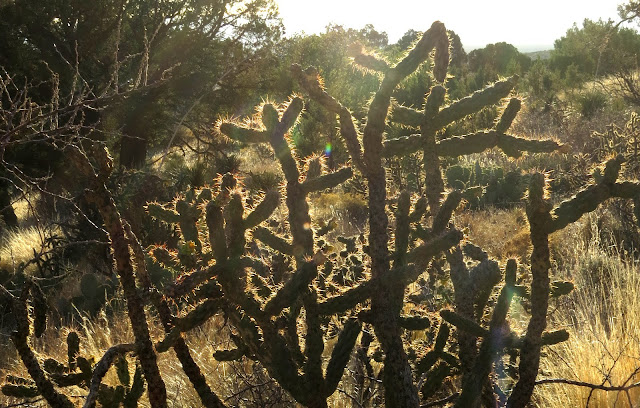 Even so, I was still able to get a few decent back-lit shots. 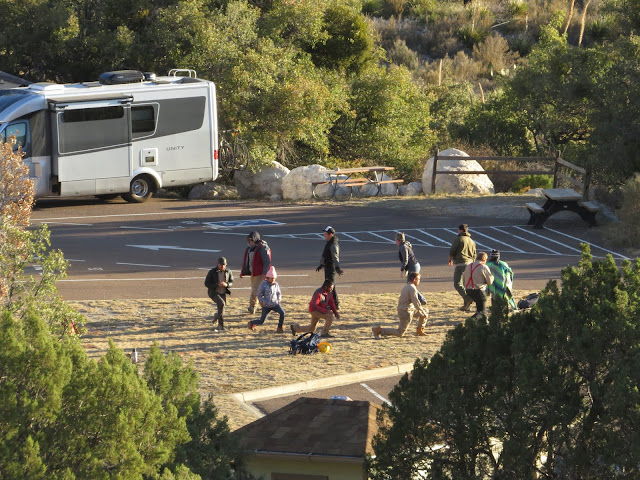 OK, before I get into the hike I have to make this small detour.

That group down there 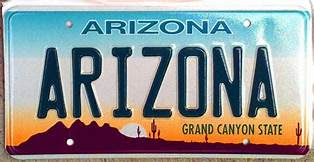 arrived this morning in two F-150 super-cabs, yep all 10 of them in two trucks. Trucks which have Arizona tags 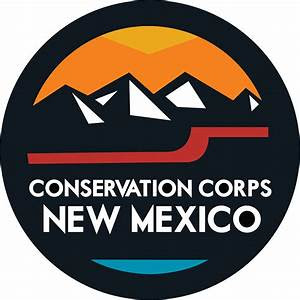 with New Mexico Conservation Corps signs plastered on the sides,

They are down there doing a series of warm-ups before donning gear, including picks, shovels, and climbing helmets, and heading up the trail somewhere, (Not anywhere I was) presumably to do some tail-work given the gear they carried, and not returning until late in the afternoon. They did this for the two days I was there. 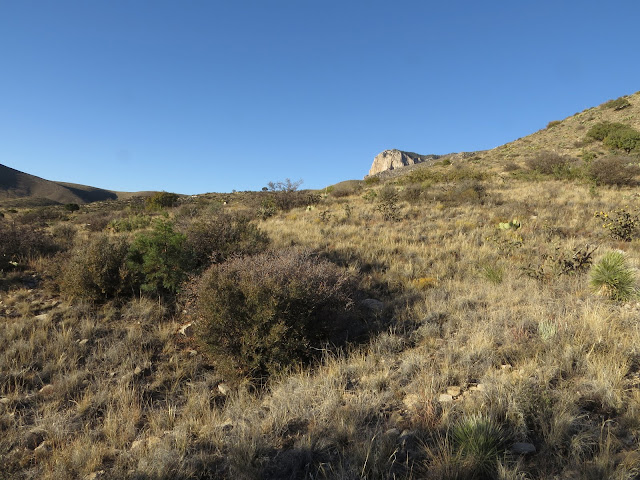 Now back to our regularly scheduled hike.

Soon after hitting the trail I have a little peek of El Capitan. 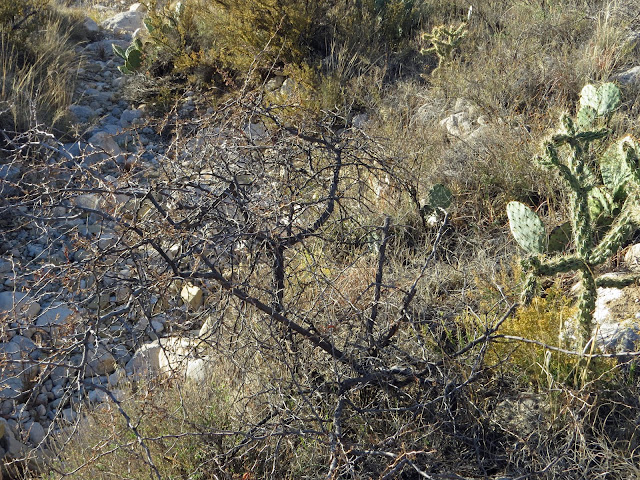 But while I was looking at that, you see that nondescript shrub sitting there leaning out over the trail just enough 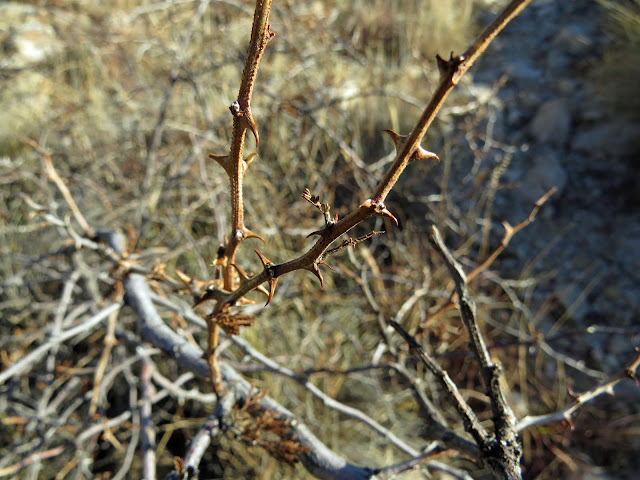 to snag the distracted?

It has the rather descriptive name of Catclaw Mimosa, also known by the exasperated hiker as the Wait-a-Minute! bush.

Because once you're tangled up in the damn thing you're not going anywhere until you ease those claws out of skin and clothing while surreptitiously looking around to see if anyone is close enough to hear you whimpering. 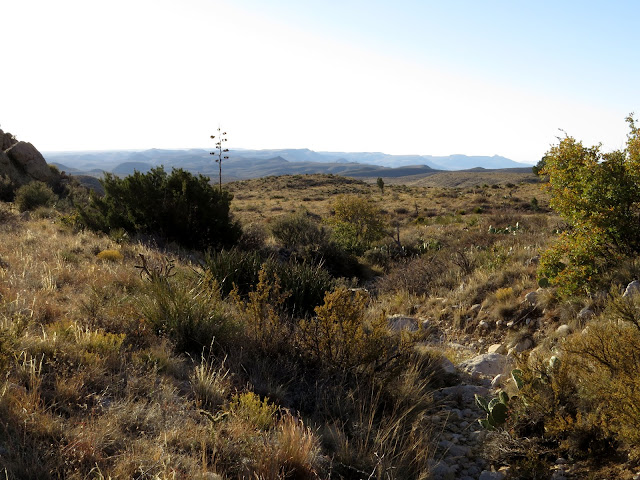 Though the elevation change on this hike is only about 400' 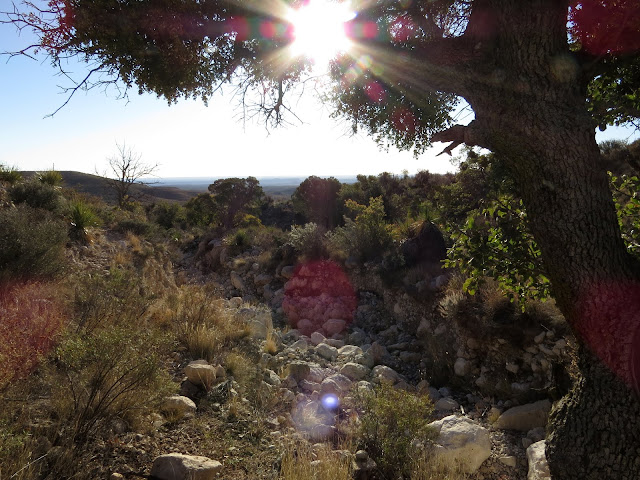 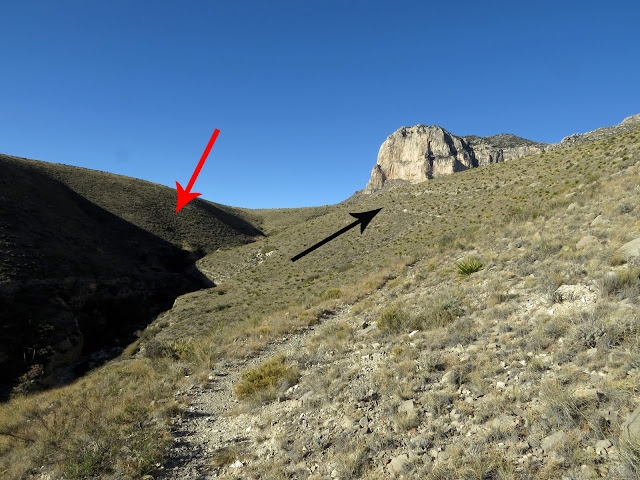 Speaking of views, as I continue around the flank of the mountain my view of El Capitan slowly increases. 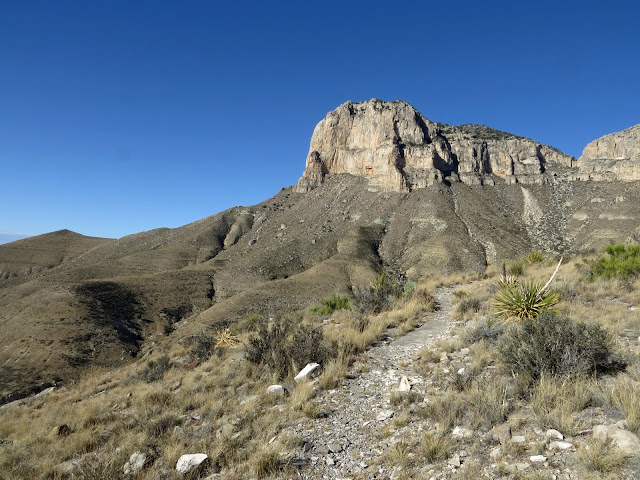 But when I get to about where the black arrow is, with an even better view of El Capitan, and I look across the canyon/ravine/wash to where the red arrow is, 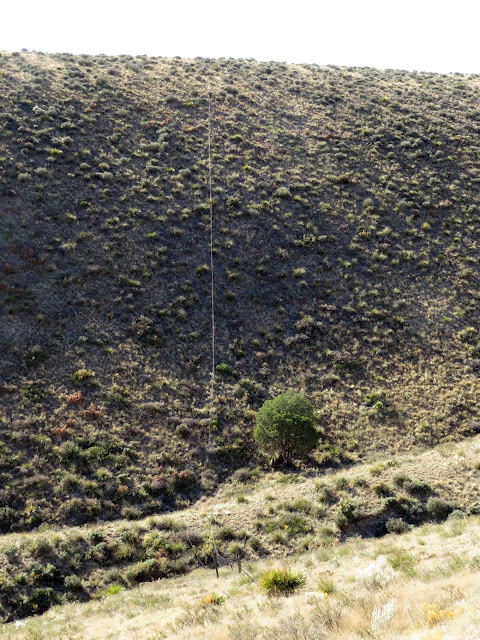 I see this and can't quite figure out what the heck I'm looking at.

My first thought was a really tall century plant, but one that tall didn't seem very likely. And this being an antenna of some sort was equally unlikely because you don't put one of those down in the bottom of a wash. 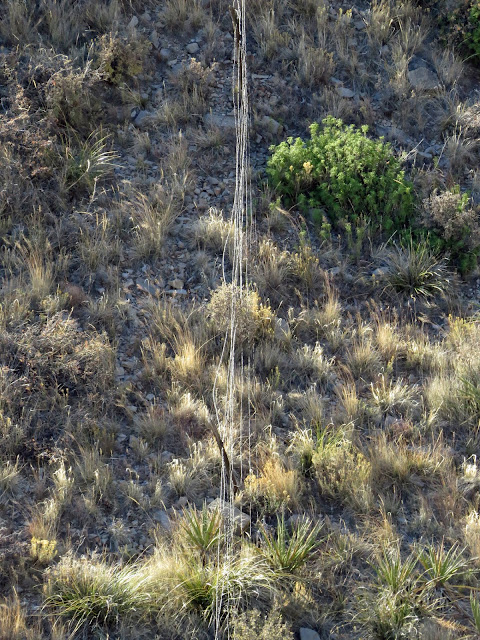 Zooming the camera in didn't help much. Now it looked like some sort of giant cat's cradle gone horribly wrong. 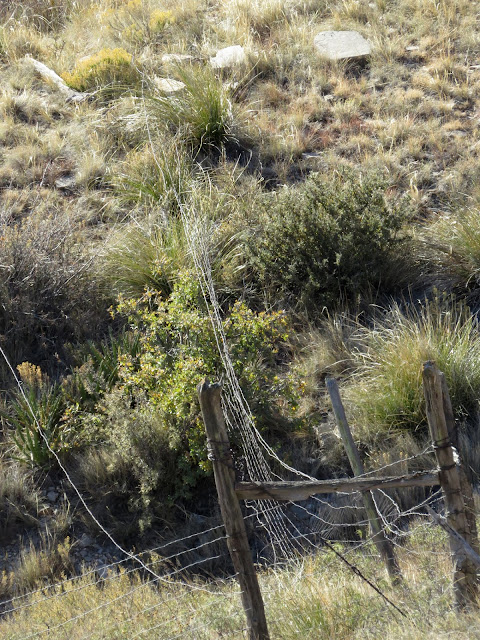 It wasn't until I panned down to the base and zoomed way in that it became clear this was a fence, one leg of which is going almost straight up the slope over there.

Kinda glad I'm not the guy that had to unroll all that wire! 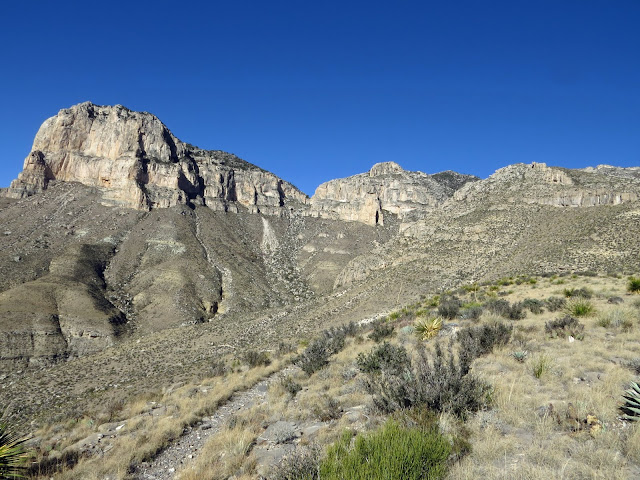 Anyway, onward as El Capitan gets closer and closer.

By the way, I think I probably did, but did I mention the wind?

It was bad in the campground.

Out here it's brutal! 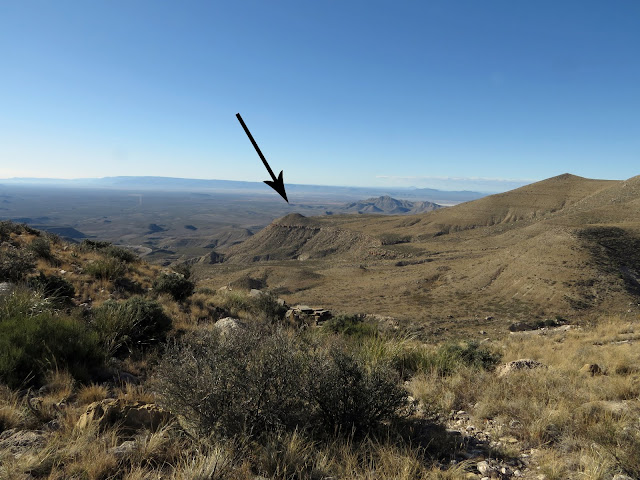 And by the time I round a ridge and get a glimpse of this hike's supposed destination, the little peak that is the Salt Basin Overlook, (which is really only the halfway point since I still have to get back) I was getting a little tired of my ears flapping so much I couldn't hear the perpetual whine of the tinnitus that is my lot in life. Besides, my hat, my go-to-town hat, was getting all twisted up by this mega-bully of a breeze. 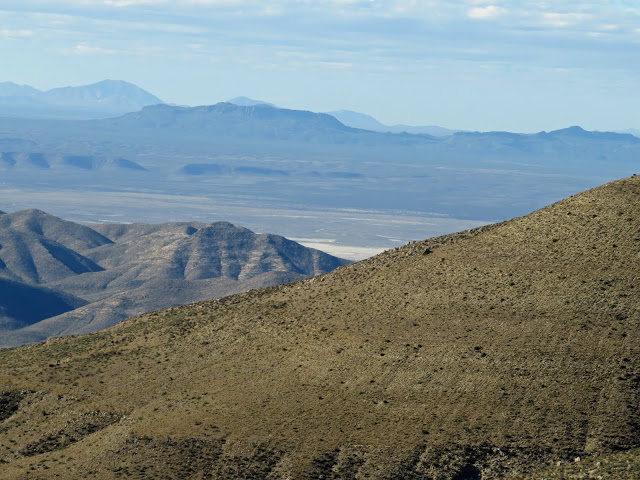 When I zoomed in from where I was and realized, even though I was only halfway to the overlook, I could a tiny little glimpse of the salt-flats out there I decided an afternoon lolling around camp with a book sounded really good about now, and I turned around. 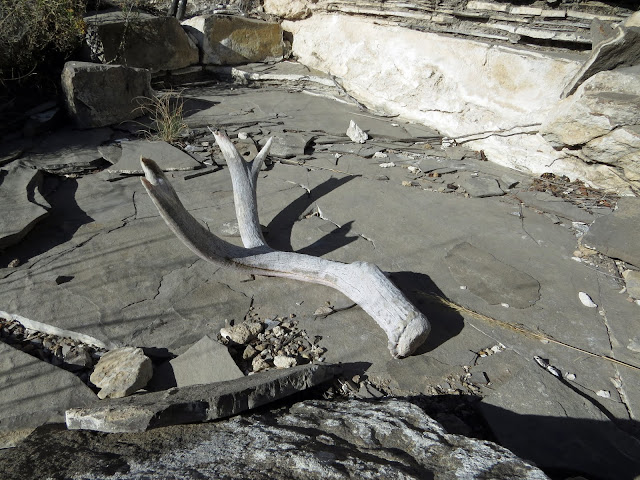 Decision made, with no small sense of relief, I headed back to the shelter of a wash I had come through not too long ago, climbed up it a ways to get clear of the trail, passing this well-worn antler along the way, 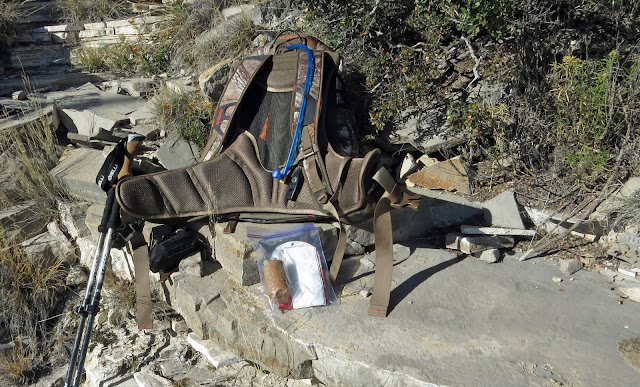 and settled in for a little snack before letting the wind push me the rest of the way back to camp.

Setting the wind aside, if I was grading the El Capitan Trail using a curve set by all the other trails I hiked here in the Guadalupe Mountains, on a scale of 1 to 10 I would give it a C-minus.

It's a nice enough hike, and in another location might rate a B-plus, but there are better hikes around here. That's my opinion anyway.