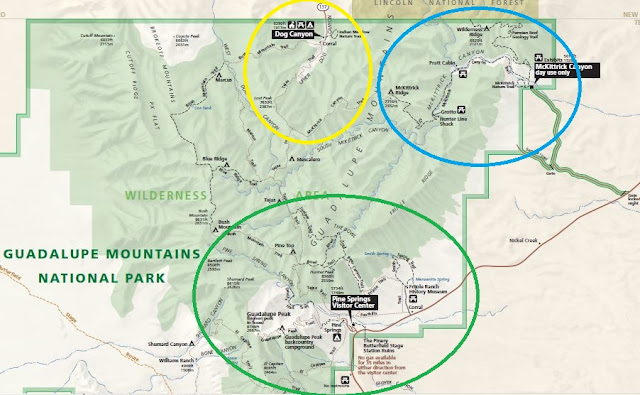 Guadalupe Mountains National Park is technically interconnected with a web of back-country trails, but it's a long ways to walk over these mountains from one end of the park to the other, so functionally the park is split into three main zones.

Pine Springs, in green, is the easiest to reach and the most visited, Dog Canyon, in yellow, is the most remote, and McKittric Canyon, in blue is a day-use only area.

I've already written several posts from the Pine Springs area, so far I have no firsthand knowledge of the Dog Canyon area, but now I'm going to venture into the McKittrick Canyon "zone".for a couple posts. 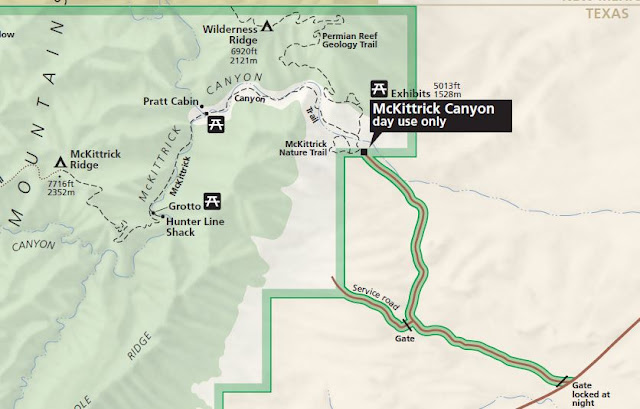 Getting here is pretty easy - once the gate finally opens at 0800 mountain time that is.

From Pine Springs turn left on US-62, drive down the north side of the pass about 7 miles, (Slowly in pretty dense fog the day I did this.) passing the Nickle Creek Station, which may have been a "station" in the past but now is the scattered infrastructure of the Ligon Ranch, wait in the north-bound median turn lane until the ranger comes by and unlocks the gate across McKittrick Canyon Road because there isn't enough room in front of the gate for both of you, (0800 is pretty late for me and I had already killed all the time back at camp that I could stand this morning and apparently my watch was running faster than the ranger's) then it's another 4 miles up a narrow but paved road to the McKittrick Canyon Visitor Center.

By the way, don't forget that the gate is locked again at 1630 (4:30) because finding yourself on the wrong side of it is serious business. There is a full page of instructions posted back at the visitor center on what to do if you get locked in. It starts with calling 911 which will connect you to a call center in the next county, they will then call the Culberson County sheriffs office, who will then contact the on-call - - - well, you get the idea. 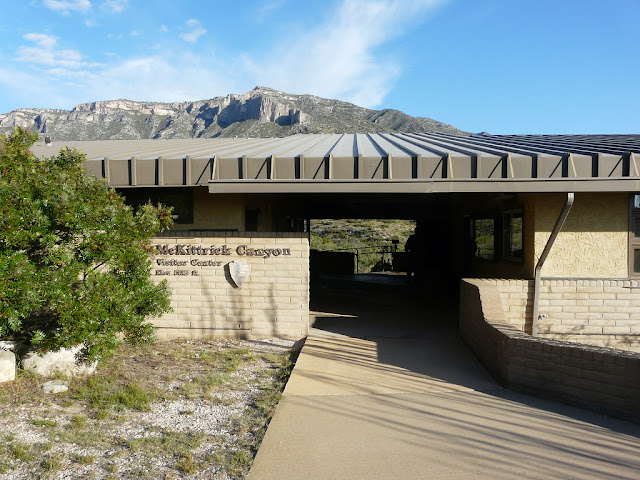 Apparently people have been living here in this canyon for at least some 12,000 years, and from the 1500's until they were carted off like so much cattle to the reservation northeast of Alamogordo NM the Mescalero Apache called the place home, but today the canyon is named for a rancher that showed up around 1870, even though the most notable "modern" remains to be found in the canyon today are attributable to Wallace Pratt who, after a 100 mile "road-less trek" from Pecos TX, first saw the place in 1921.

By the 1930's Pratt had started buying land and built a stone and timber cabin up the canyon where the north and south McKittrick rivers come together, as well as a hunters cabin up there a few miles further.

When I got here, on a Friday morning, the Visitor Center Office, with a sign saying "ask here if you have questions" was shuttered and locked, but if you go through the breezeway between the office on the right and the bathrooms (Flush toilets) on the left, there is a covered seating area back there and if you push the button below the screen tucked in behind the office a 10 minute video of Pratt describing what attracted him to the area, the geology, (that was his profession) and his reasoning behind donating over 5000 acres to the park, will play.

Maybe you will feel different, but I thought it was worth watching and makes a good start to a visit here. 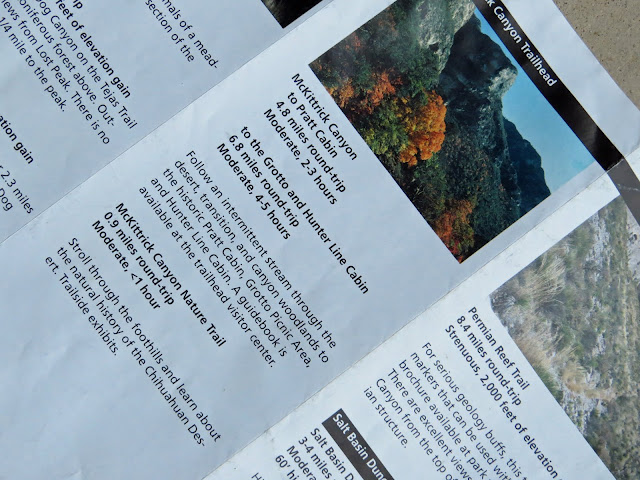 There are three main trails that originate just behind the Visitor Center.

The Permian Reef Trail earns a Strenuous rating for the 2000' climb required.

Since I don't really consider myself a serious geology buff , and the brochure necessary for decoding the interpretive markers along the trail was unobtainable at the unmanned visitor center, I thought that was a better sounding excuse for skipping this trail than pure laziness. So I decided I could focus on the other two trails instead without too much guilt clawing at me. 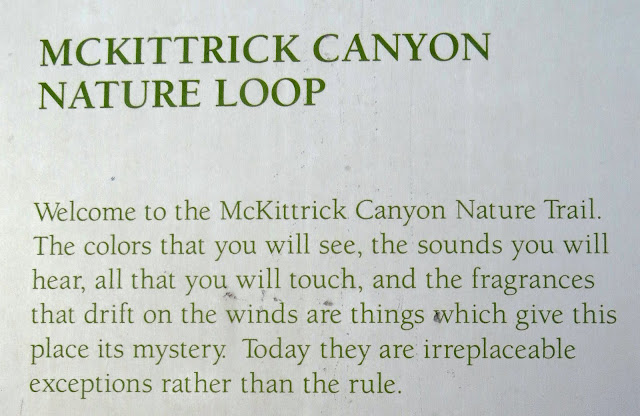 At barely a mile long (1.3 by the time I quit messing around.) it's debatable whether the Nature Loop qualifies as a trail or a stroll,

but I thought it was worth an hour. 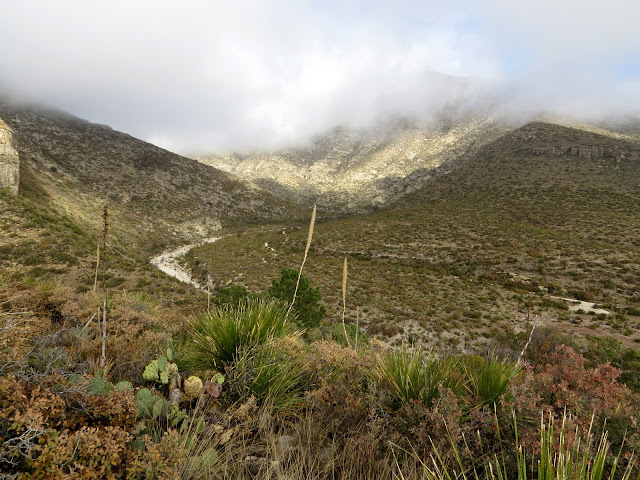 Besides, that would give the fog a little more time to lift out of the canyon before I hiked the longer trail. (OK, OK, so I didn't have to be quite so hard on the ranger showing up a few minutes late to unlock the gate. . .) 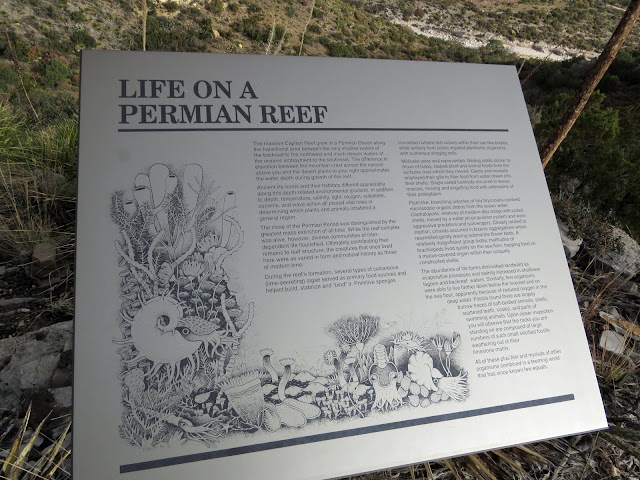 The Nature Trail is populated with a lot of information, both geologic and flora/fauna wise.

Don't worry, I won't inflict any more than this one on y'all, I just wanted to show that the plaques are clear and easy to read, which is not always the case after prolonged exposure.

By the way, this was one of the two or three plaques that are this wordy, making them like kryptonite to the easily bored and distracted - you know, like kids - the rest were shorter and more to-the-point.


Though not a difficult trail at all, you will need a pair of functional legs to manage the rocky path and the 200' of elevation change of this nature loop. 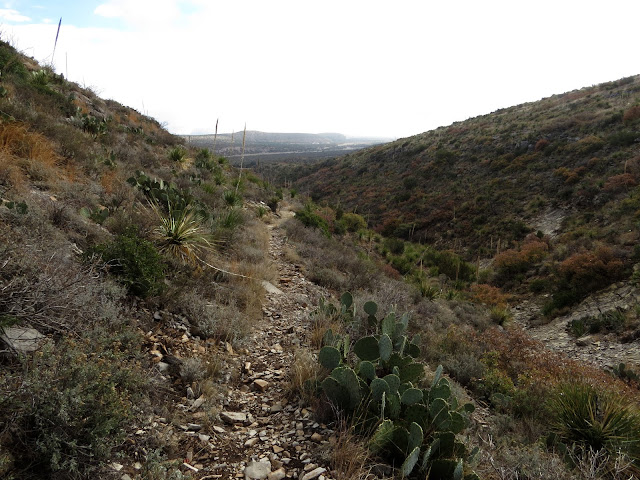 I did my usual counterclockwise orienteering which had me returning towards the visitor center down one side of a ravine with views to the northeast but not of the canyon itself, 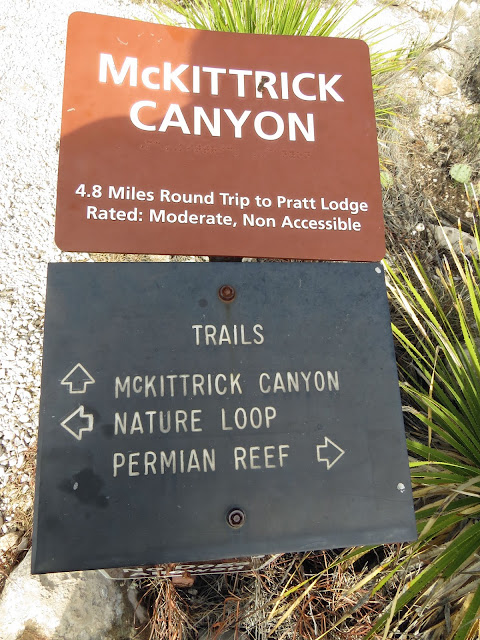 but I would be on the trail up the canyon soon enough.