The following events occurred on November 19 2019 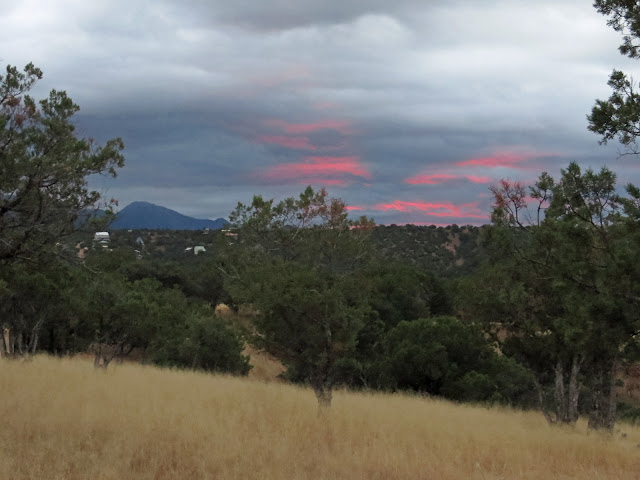 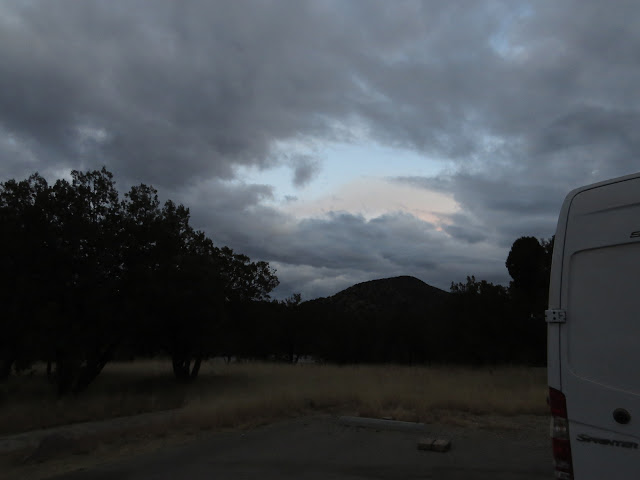 because, though for the optimistic there was hope in the form of some holes in the cloud-cover, for the realists the forecast was calling for deteriorating conditions with a rough afternoon predicted, to be followed by several days of nasty weather, 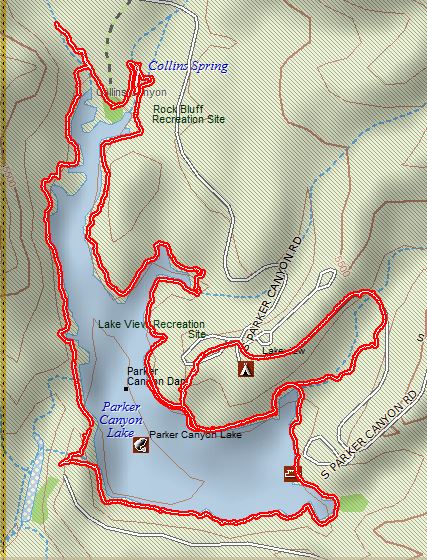 and I really wanted to get a hike in before the predicted sky, and wind, and cold, came crashing down on me. 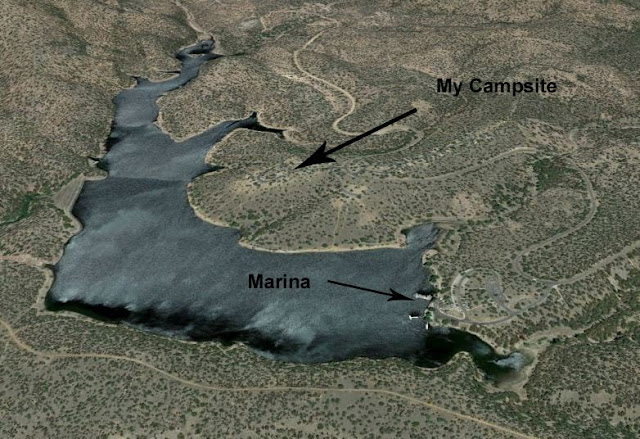 The lake is about 125 acres and there is a trail around the perimeter, which is the obvious choice for this morning's hike. 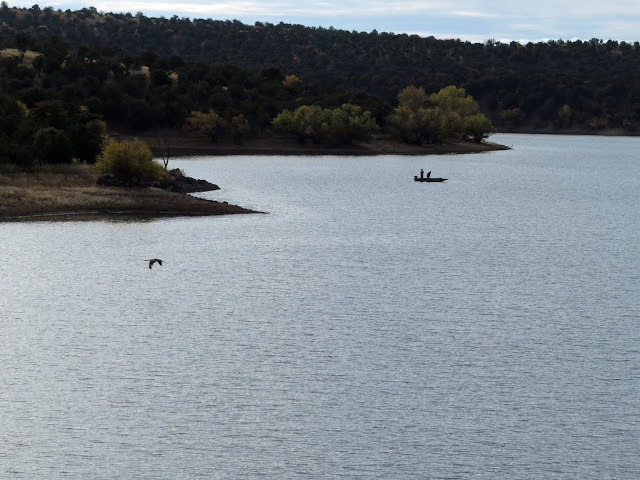 As you can imagine, this is one of the few places in the state where lake-fishing is available.

You can fish from the shore, bring you own boat (10 HP max if powered), or rent kayaks or fishing boats at the marina. 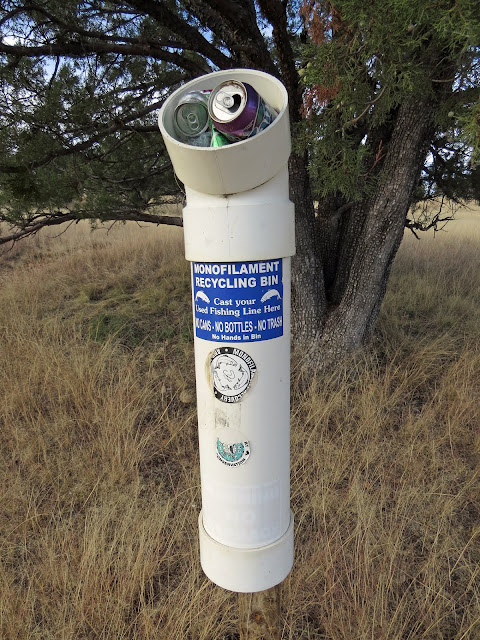 There were no people around, but by the looks of it shore-fishing is a pretty popular activity here and there are a number of these fishing-line recycling stations along the easier-to-reach shoreline near the campground and marina.

As you can also see - people suck!

Despite the good intentions, and the sign saying no cans, no bottles, no trash, every one of these things was stuffed to the gills with cans, bottles, and trash, leaving no room for the deadly tangles of fishing line. 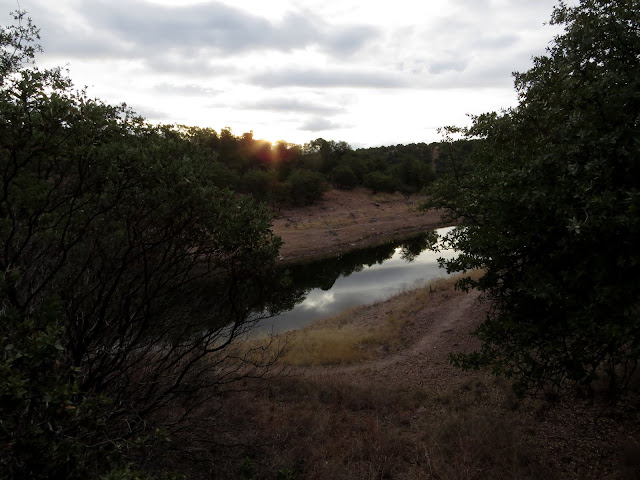 Anyway, after negotiating the 100' drop from campsite to lake-shore, which was the greatest elevation change of the hike, I turned counterclockwise and by the time the sun was coming up over the trees, I was around that first inlet on the shore-hugging trail and well on my way to the pointy upper end of the lake. 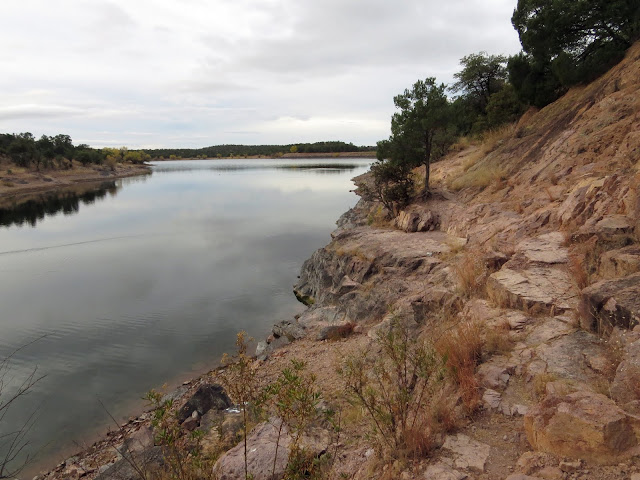 The end with the more rugged shore-line, 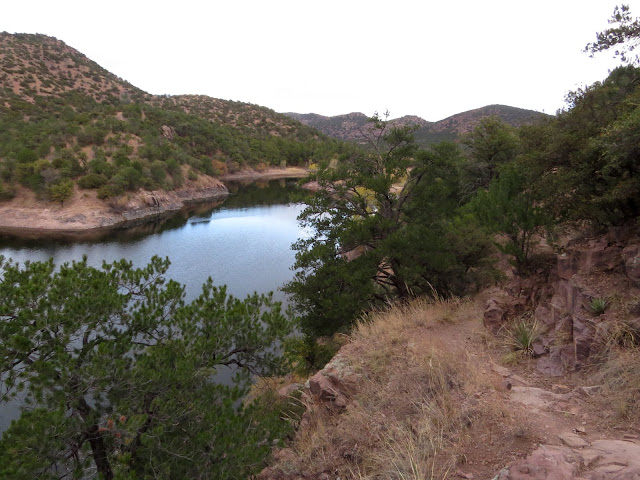 though the hiking was never difficult. 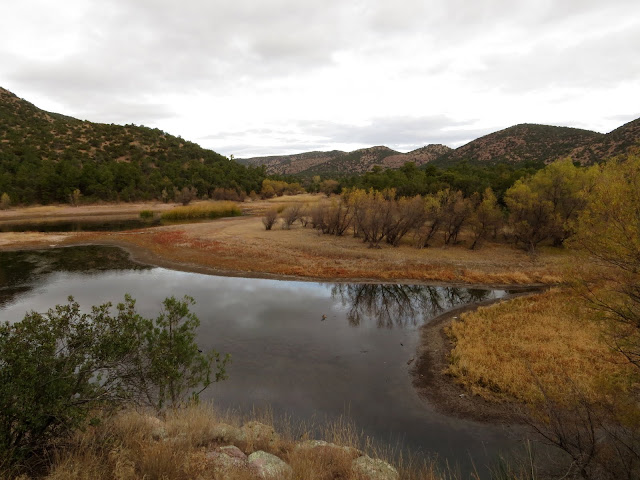 This is also the end where most the shore-birds hang out, though they made a point of moving out of my way as I went. I guess the birds here are just camera-shy. 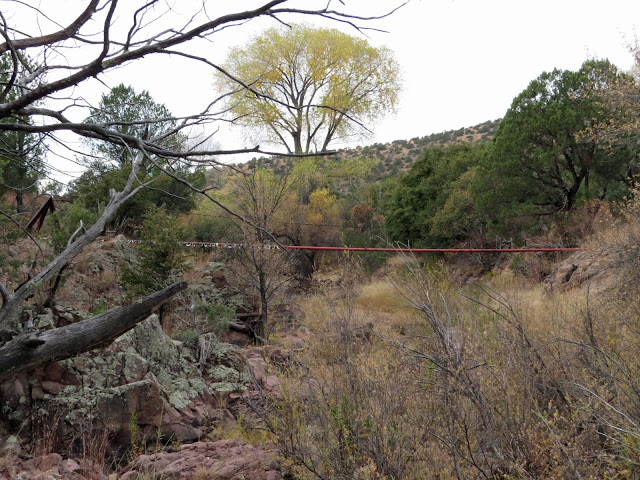 As I approached the north end of the lake where I would turn the corner and start back down the other side I saw this thing up ahead.

At first I thought it might be some sort of dare-devil bridge to get across Collin's Canyon, 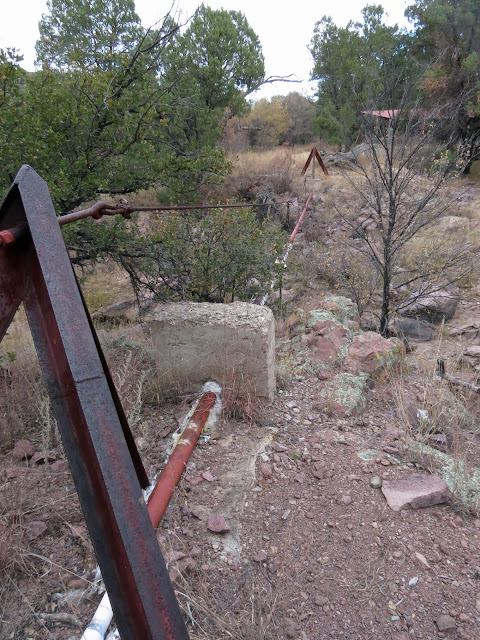 but it turned out to be a suspended pipeline and not at all suitable for walking across.

Instead the trail crosses up-canyon from here a couple hundred feet. 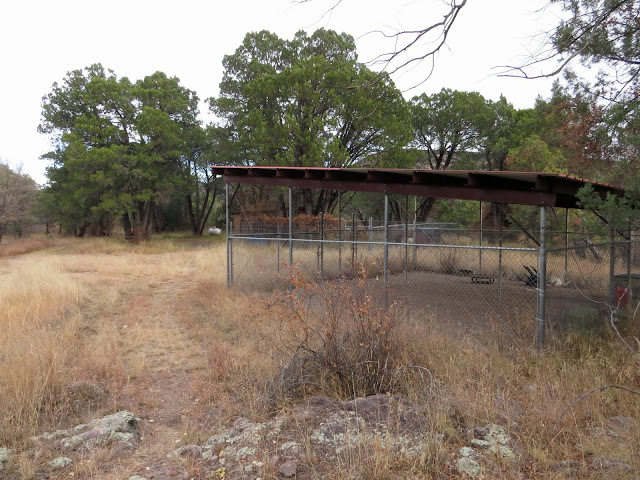 and right after that I came across this.

It's completely fenced in, including roof, and my first thought was of a prison exercise yard. (Not that I have any first-hand knowledge of prison exercise yards mind you!) But there were no guard towers so I still don't know what it was all about, though, just beyond this thing - whatever it is - 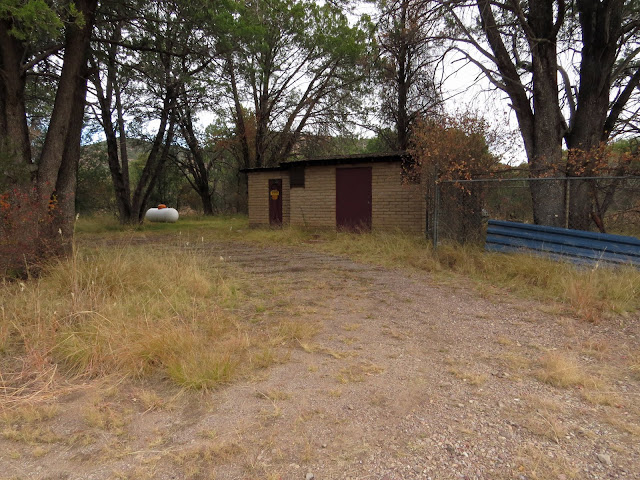 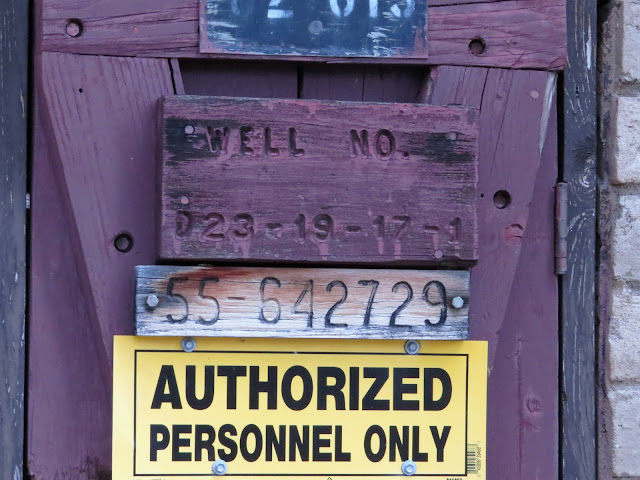 There's a propane powered generator on the back-side of the building and I'm figuring this must be where that pipeline originates. 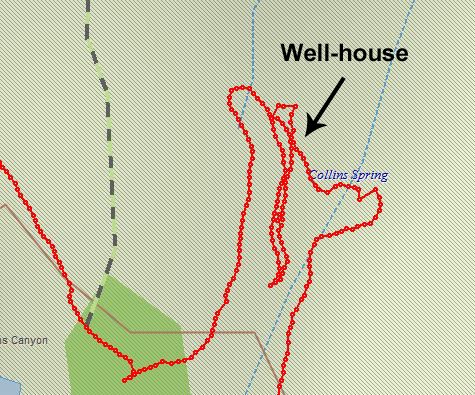 This is also where some trail-markers make things a little confusing.

Standing in front of the well-house there are two different trail-markers visible. Those little backpacker-with-hiking-stick diamonds tacked to a post.

One seems to point down the near-side of Collin's Canyon, which makes sense, but then that way soon dead-ends in a maze of brush and diminishing game trails.

The other marker seems to point up along an unmarked road that's more track than road (the MVUM doesn't even show it though I think it's an extension of 48C and is probably used to get a truck in here to fill the propane tank.) that is heading north, away from the lake and away from where I expected the trail to be.

But eventually this wrong-way option does a U-turn as it crosses a wash and heads back towards the lake again. 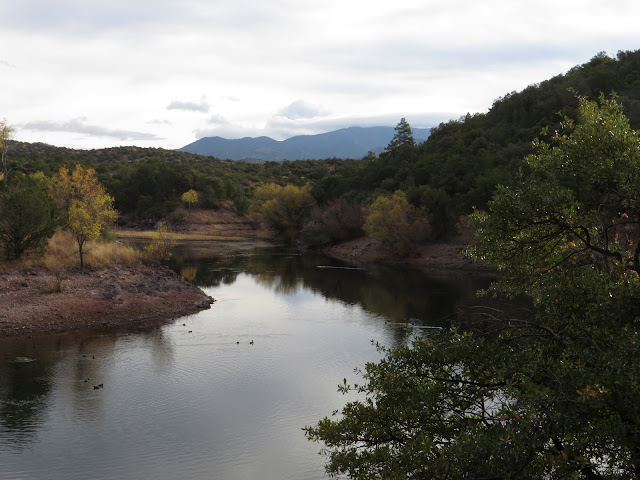 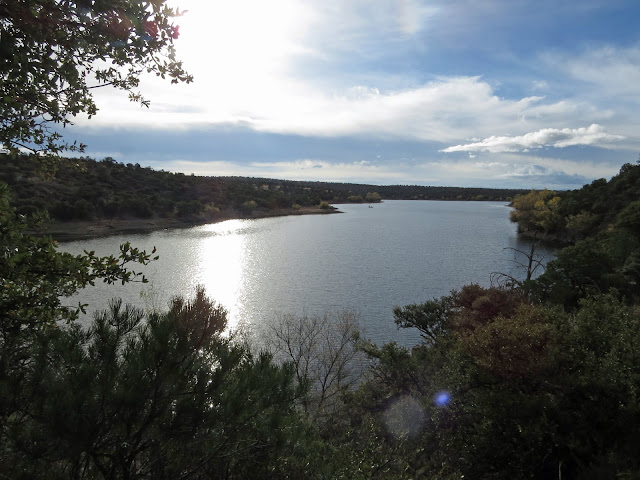 but, despite the lack of any real light, the sky is looking a little less ominous with larger patches of blue in my vicinity so I'm not feeling rushed. 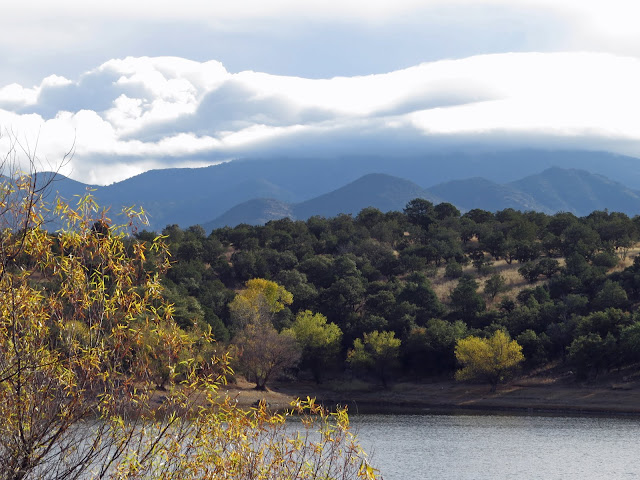 Mind you, though I may have some bits of sun coming down on my head once in a while, the Huachuca Mountains to the east are looking a little rough, so maybe the forecast isn't completely wrong. . . 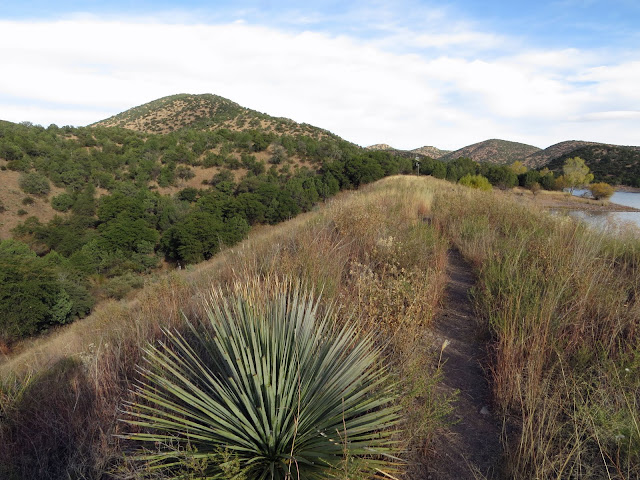 But as long as I keep my back to the mountains and look west and north, as here just after I crossed the lake's earthen dam, things are looking pretty good. 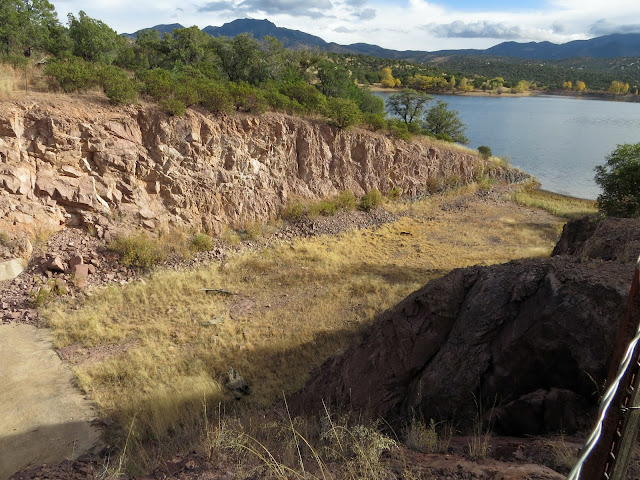 The spillway here at Parker Canyon Lake is a little different than what I'm used to seeing.

Instead of being incorporated into the dam this spillway is about 500' south of the dam and has been cut deep into the surrounding rock.

Just there in the bottom right corner of the photo you can see a bit of  the fence designed to keep hikers from falling the 30 feet or so from trail into the cut. 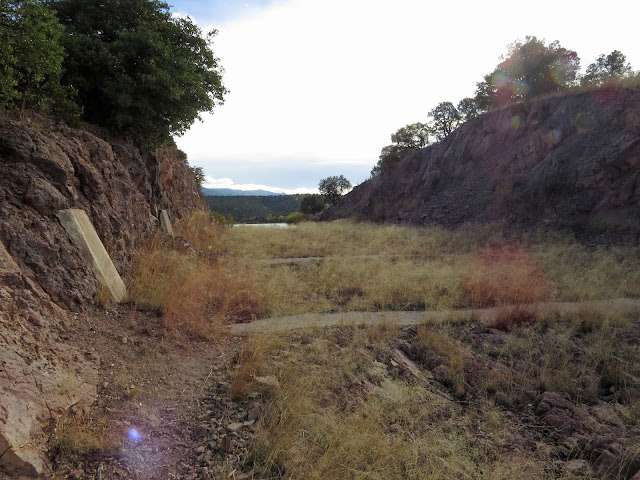 Instead you have to detour to the down-stream end of the cut to get across it. 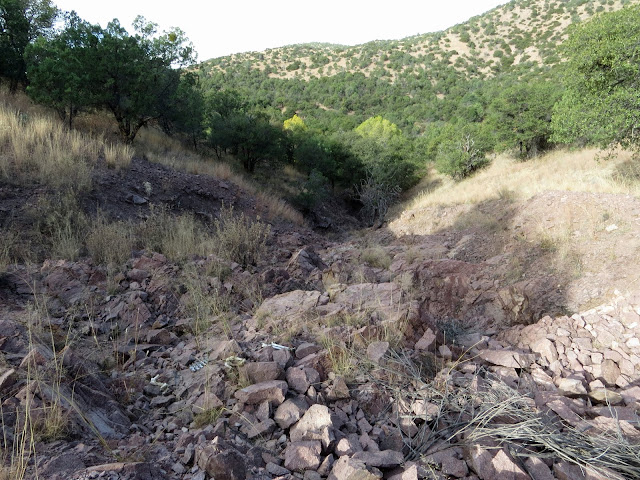 and here I've turned around and am looking down the spillway towards where this wash eventually joins the Santa Cruz River, but not before crossing the border into Mexico.

And yes, for those with good eyes, those are the skeletal remains of a deer. Judging by the lack of flesh or even tendons, they have been there a while. 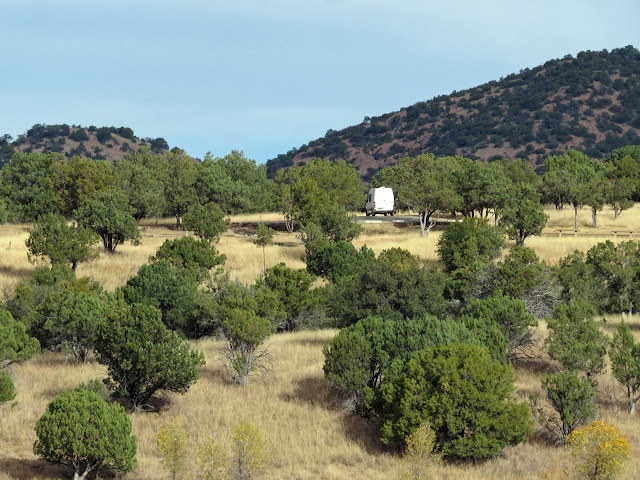 From across the lake I can see The Van glaring at me. True, I had to zoom in quite a ways, but she sure does stand out in all her sunlit white glory!

Though eminently practical, reflecting heat rather than absorbing it, not showing dirt, and being highly visible on the road, white is not the best color for whispering. Maybe a nice stone-grey would make her a little less conspicuous out there. . . 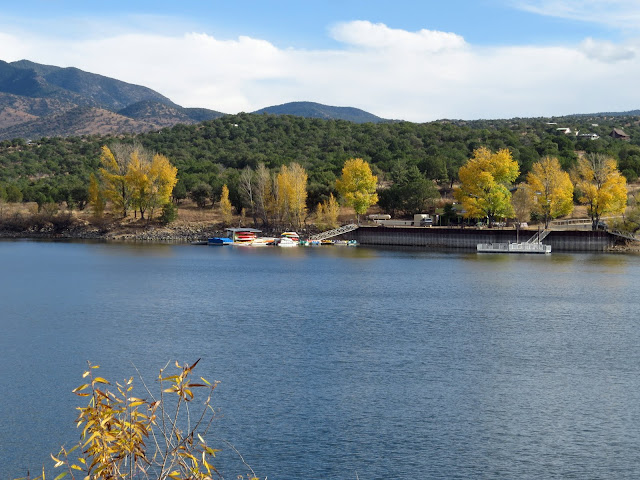 Not long after crossing the spillway I turn the corner and am negotiating the south side of the lake where it is widest.

On the home stretch now and the weather has held, in fact it's even looking pretty dang good about now, but is apparently still lurking in the area waiting to catch the clueless and less than wary off guard.

In fact, by the time I finish the hike and get back to The Van where I can check in with NOAA weather radio things are starting to get a little more serious. Flash flood warnings are up for later in the afternoon and this is supposed to settle in for several days.

From here the road out to Sonita is paved, but it's still forest-roadish with 25 miles of narrow, twisting, dipping, climbing, and low-water crossing track from here to there, so I make the decision to get on out of here while the gettin's good and relocate back towards the east where the wet part of this weather has already passed through.

Nightfall found me back in New Mexico and on the backside of the rain, which hit me pretty hard between Wilcox and Lordsburg, but the front still had a strong hold and the wind from the south was fierce. Fierce enough that I found myself dodging refrigerator-sized tumbleweeds barreling out of the growing darkness as I bulled my way the last few miles to Deming where I planned on shutting down for the night.

(I managed to dodge all but one microwave-sized weed which went under The Van with a hearty thwack-crunch.) 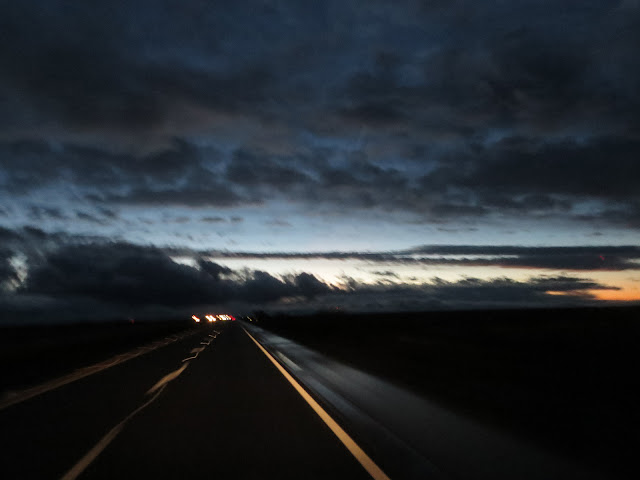 Before dawn the next morning I was headed back towards Guadalupe Mountains, but only after I swept the thousands of willow-leaves  off the van that had been stripped from the trees last night in the Walmart parking-lot by the wind so I could see out the windshield. (Weeks later I'm still finding little dried curls of willow-leaf hiding in the cracks and crevices of The Van.)

A return to Guadalupe Mountains wasn't in my original plans.

When I left Arizona and headed back east I had intended to sweep north through Silver City and from there revisit Alamogordo, Cloudcroft, and the Sacramento Mountain area, maybe even tackle the Dog Canyon Trail again, but with the forecast last night calling for snow and ice down to the 6500' mark, and today's forecast calling for continued snowfall above 7500' in the Sacramento Mountains, I decided that wasn't such a good idea. . .