OK, when I sit back and examine that post title it's sorta pathetic really to get so excited about something so mundane.

After all, I'm talking about a day-hike in a so-so location, not an epic adventure in a once-in-a-lifetime venue.

But through my personal corona-lens, it was a big deal!

Usually for me isolation is not an issue, in fact it's the norm, to the point where I never really thought much about it before except maybe when people used to remind me that I hadn't attended a single company Christmas party in the 31 years I was there. But sitting here in these strange times for the past half-year, tucked into my disease-fighting little fortress watching others dealing with the unusual situation through my on-line portal-to-the-big-bad-world, I've begun to question myself.

After all, while I'm hunkered down here behind the locked gate, suspiciously paranoid about every potential stranger-encounter, I've been watching one side of my family complain about masks and mandates and lost freedoms while going to back-yard BBQ's or on group camping trips, and posting group photos that are distinctly non-social-distancing approved. And even the more cautious side of the family have continued to get on with life by going, albeit fully masked, to work every day and playing in the golf-league once a week then afterwards gathering out in the parking-lot in a well-distanced circle for some 2020 style socializing. Cripes! Even Mom, probably the most isolated of us all in her community which has handled these times exceptionally well which we're so thankful for, had the community computer guy come into her apartment last week (First time anyone other than her as been through the door since February) to resolve some of the problems that have virtually shut down her ability to use said device. (Mom is kinda hard on technology. I keep telling her to stop stabbing the computer with her knitting needles but I don't think she listens. . .)

This has all made me do some serious questioning about myself and my fears, not so much my isolationist lifestyle, which I'm perfectly comfortable with - most the time -, but whether or not I'm still capable of going out in public at all after these last few months. On top of that there are a couple of family events screaming towards me over the next few months and, even if they don't happen, I may have completely lost confidence in my ability to go forth into the world. 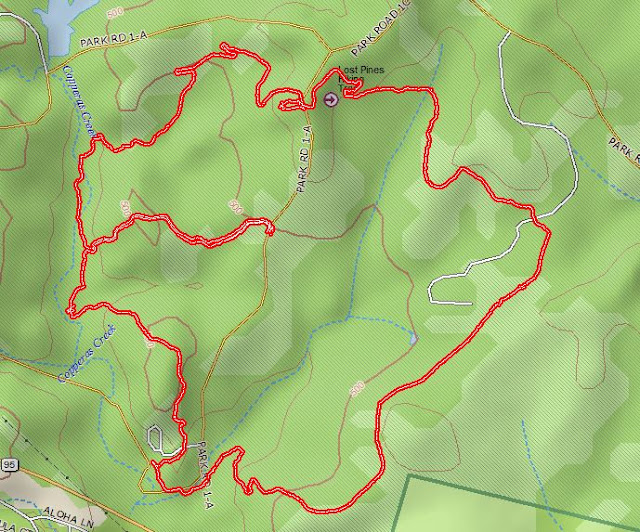 So the other day I got on-line, used my Texas State Park pass to reserve and print a day-pass, (Can't do this at the park on the day like the good-ol-days since the office is closed)  and yesterday (July 22) drove The Van over there with mask at the ready and took a proper hike.

But don't let the GPS track of my 5+ mile hike there in that image above fool you. 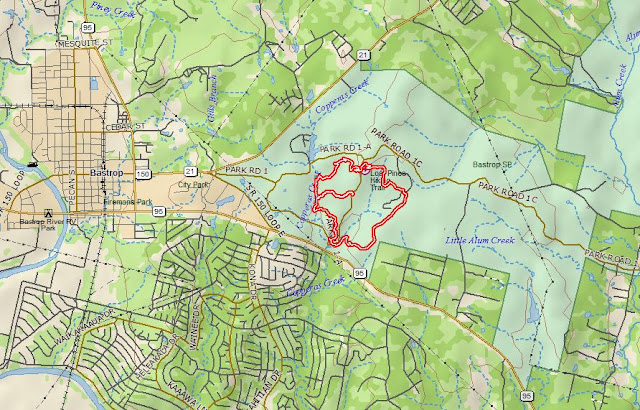 This park, Bastrop State Park, is small and within constant ear-shot of the busy highway there along it's southern edge.

Oh, and now-days the town of Bastrop lurking there just to the west is just an overcrowded suburb of the cancerous sprawl that used to be "keep it weird" Austin so the number of trucks grinding up that hill over there is - well - a lot!

The only thing going for this location is that I didn't have to leave the house in the wee-hours to get there by the 0800 opening time since a sunrise departure would do just fine, and it had day-pass slots available at relatively short notice.

My preferred destination, Pedernales Falls State Park, requires leaving the house really early to make a day-trip of it, but has about 4 times as many trail miles, all well away from any developed spaces. But snagging one of the limited number of day-passes there on short notice proved to be problematic. 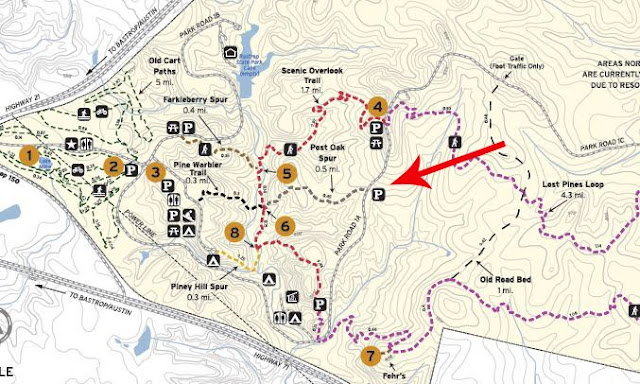 So, on this experimental foray out into the world, here I am parked in an overflow lot on the outer reaches of the Bastrop State Park trail system.

Not that the other lots were full, far from it, I just figured few would be interested in this small lot at the bitter end of the half-mile Post Oak Spur - or Grey Trail depending on which map you are looking at - and that's my kinda place, regardless of the times. 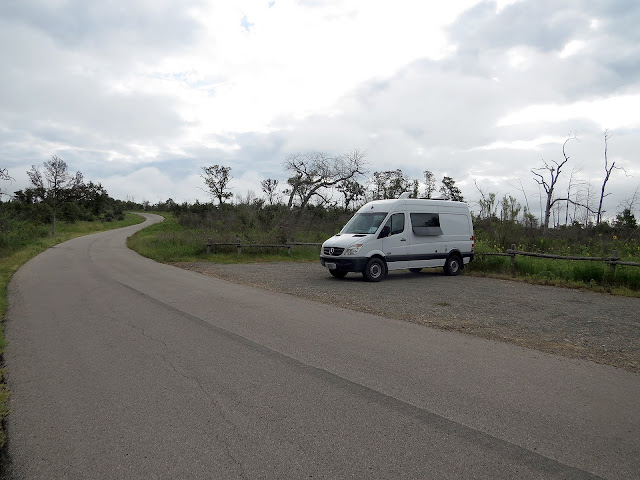 As you can see, it was a pretty overcast day, which is bad for photographs but for late July in Central Texas where, even without direct sun, it's in the high 90's - low 100's with humidity's to match, clouds-be-good! So I wasn't complaining. 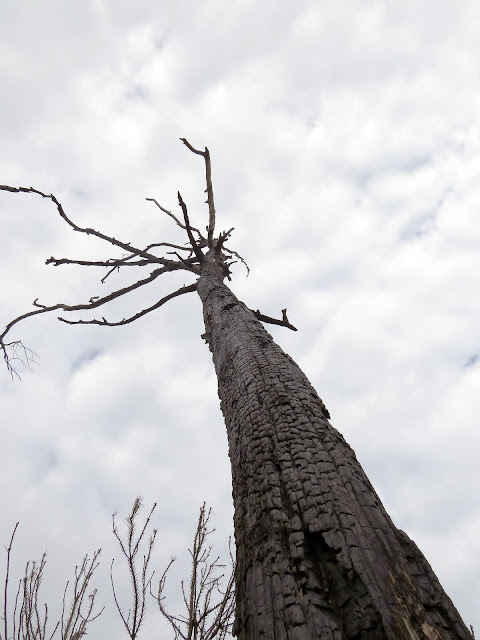 It's been 9 years since the Bastrop Complex fire went through the area, including most of the State Park, (The campgrounds in this park still haven't been reopened.) 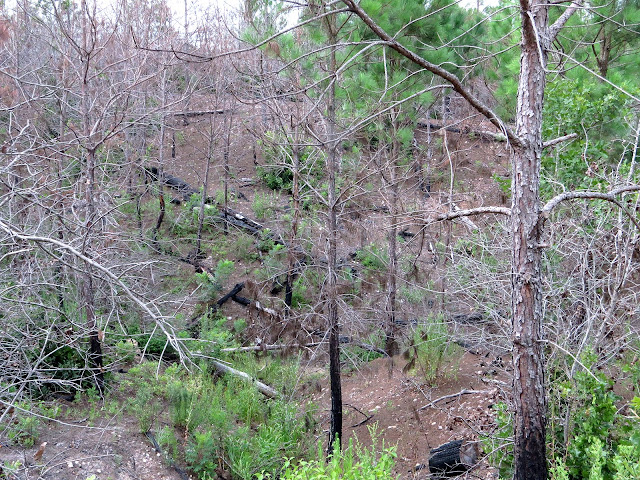 and even longer since I've been here myself. 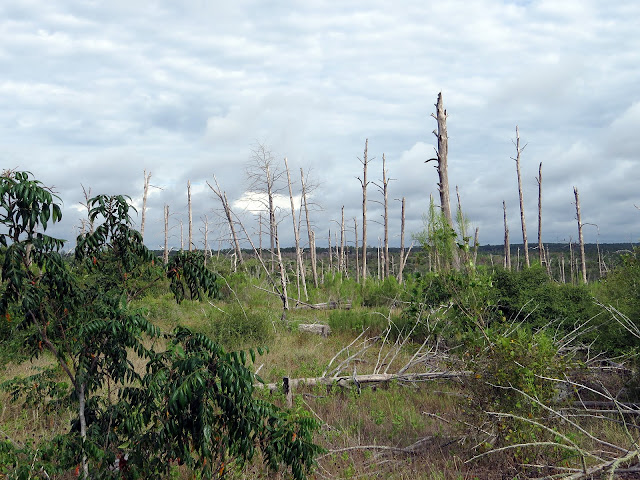 The 34,000 acre fire took out over 1600 homes and businesses as well as much of the park's stand of "Lost Pines", a more drought-tolerant variant of the Loblolly Pine so prevalent in East Texas. 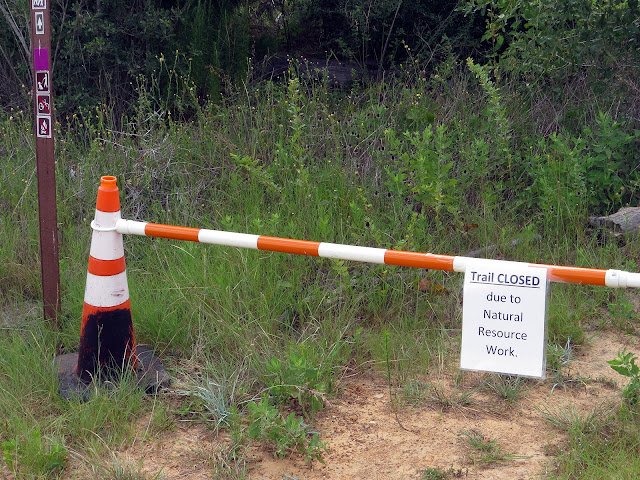 But like it always does, the earth heals itself, and though there are still plenty of leftovers from the fire, such as some trails closed off for restoration work, 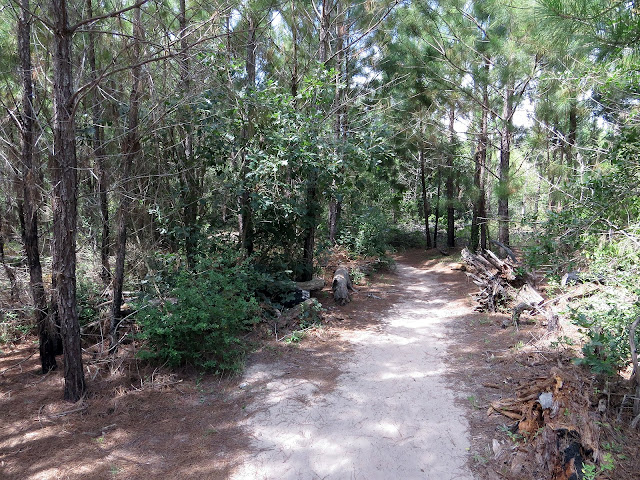 there are some nicely recovered areas as well. 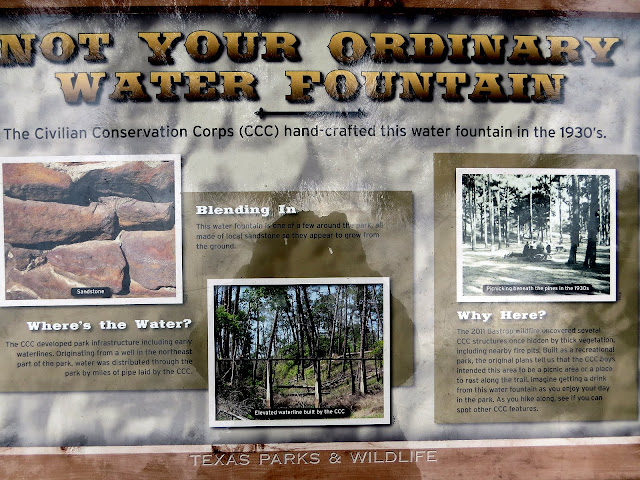 One unexpected thing the fire did was to expose a number of CCC projects that had been lost over the years under the vegetation. Most of these were fire-rings but there were also a few of these 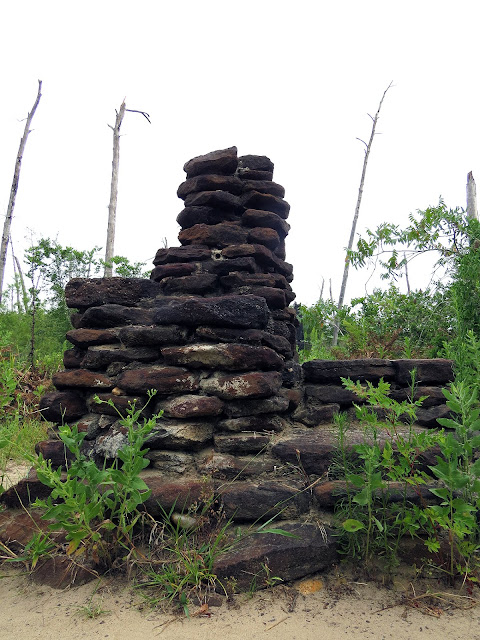 elaborate drinking fountains built with the native sandstone and fed with a network of pipes crisscrossing the park. 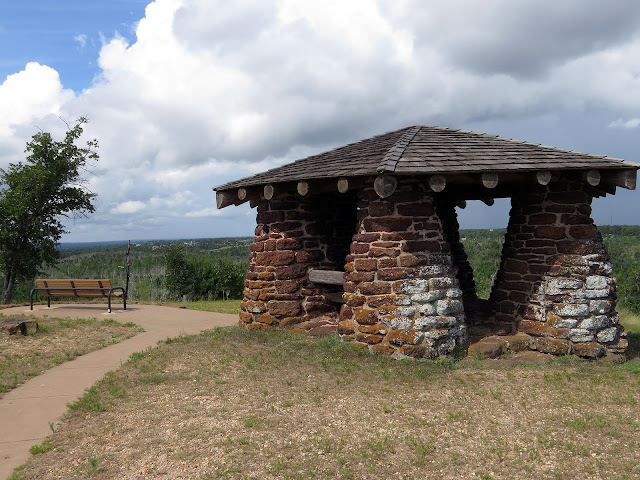 Also built in the CCC era with the same stone, but never lost, was this shelter built on an overlook. 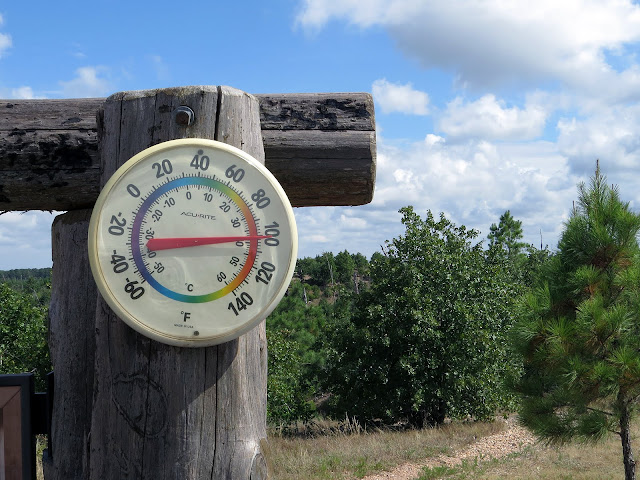 And given the temperature this nearby thermometer was shamelessly broadcasting as I neared the last third of my planned hike, 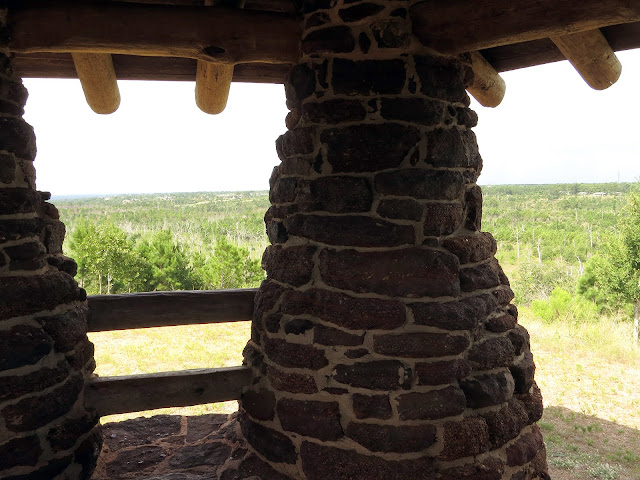 the cooler environment, easily 10 degrees cooler, under the shelter was a welcome break. 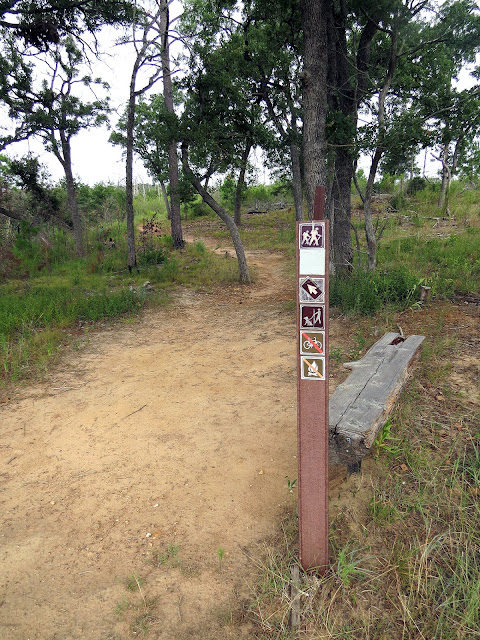 So, was my excursion a success?

Bastrop State Park was certainly not my first choice of destinations, but I've met few hikes that were total busts so the hike part was, while not in the great category, fine in and of itself.

As far as getting myself back out in the world, I'm not sure just how much this day-trip pushed that agenda forward.

I drove from driveway to parking-spot to driveway with no stops in between. Talked to absolutely no-one all day. The closest I came to any person-to-person interaction was the un-masked dog-walker so embarrassed - or pissed off, I couldn't tell which - about being caught with the dog off-leash she went by where I had tucked myself well off-trail (With my mask on for the first and only time during the day) without even making eye-contact let alone small-talk.

Other than that I had the park, or at least my part of it, all to myself.

Which, on one hand, is a pretty typical day for me even back in "normal" times. On the other hand, I'm not sure this expedition did a whole lot to help me gain my go-out-into-the-world confidence back either. 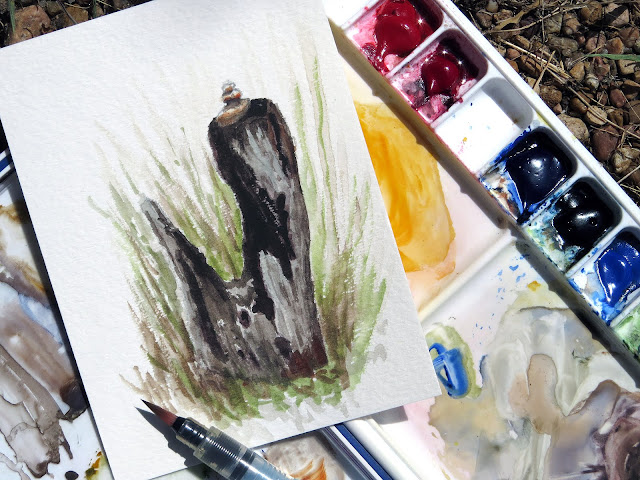 One last little oddity before I go.

Along the half-mile Post Oak Trail - and only along that trail - for some reason every single burned stump had a rock-cairn stacked on top of it. I can't figure out why, and why only there. It doesn't seem to serve any restoration purpose and if it was rambunctious kids, well families and twenty-somethings are far more likely to park at one of the two main trailheads, and I saw nothing like this near either of those.

Oh - and I explained that self-contained water-brush, that thingy down in the bottom left, and the watercolor field-sketch kit I put together in another post. It's just that I've gotten posts out of order here and that one isn't scheduled for a while yet.