Dancing with Ghosts at Fort Lancaster 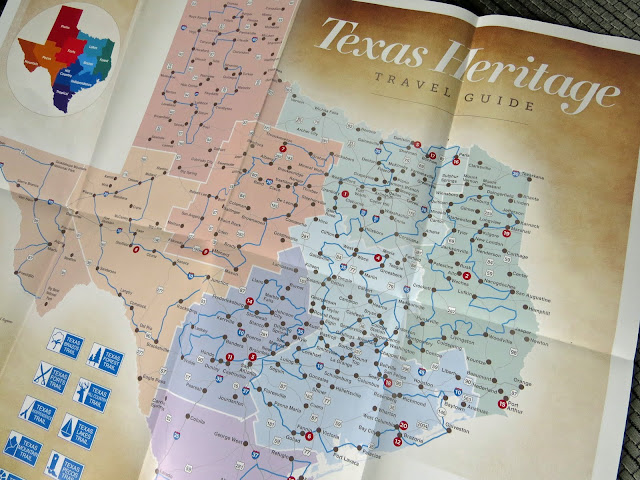 The Texas Historical Commission manages - well, I don't actually know how many historical sites they manage, but it takes a 170 page brochure just to list all of them with a brief description for each.

That brochure, which is free, also comes with the map shown above. 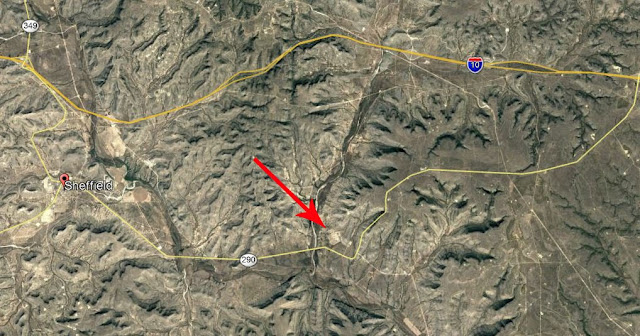 On the first day of this current trip, my trip to Guadalupe Mountains and westward, nearly 3 weeks ago now, I was making miles on I-10, you know, because this is a big state and I had a long ways to go, when I passed a small sign saying one of those historical sites was coming up, but only if I was willing to get off the big highway and take the scenic loop that originated at the next exit.

SR-290 is one of those roads that has been pretty much lost under the interstate out here, but little bits of it, like this one, survive by wandering off from the main route once in a while.

I'd had many hours since departure this morning to settle into a comfortable two-lane, 65 MPH rhythm out here on the interstate and was all geared up for a few more hours of the same, but on one of those wild-hair, spur-of-the-moment whims I found The Van wandering off along SR-290, lured by the promise of the little brown sign. And since The Van is my ride, i went along with her. 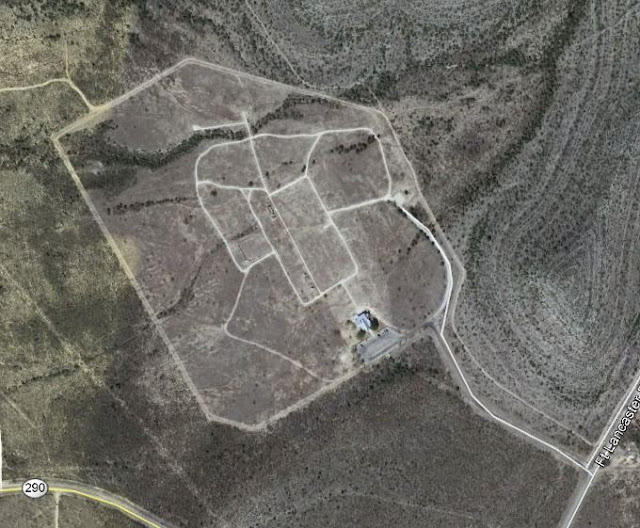 But by the time we actually pulled into the Fort Lancaster State Historic Site it was within an hour of closing time and I decided that just wasn't enough time to properly check the place out, especially since Historical Society sites are not covered by my Parks Pass and I would have to pay the $4 entry fee. But three weeks later I was retracing my steps, or is that wheels?, back across the state and this time I got to the fort shortly after it opened. 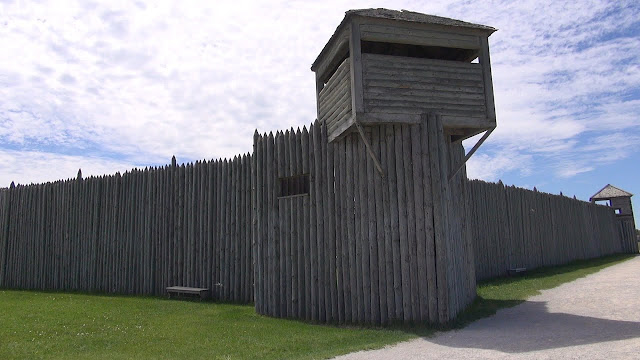 Now I grew up in Michigan where forts were stockaded enclosures of wood with gun-ports and big massive bared gates. 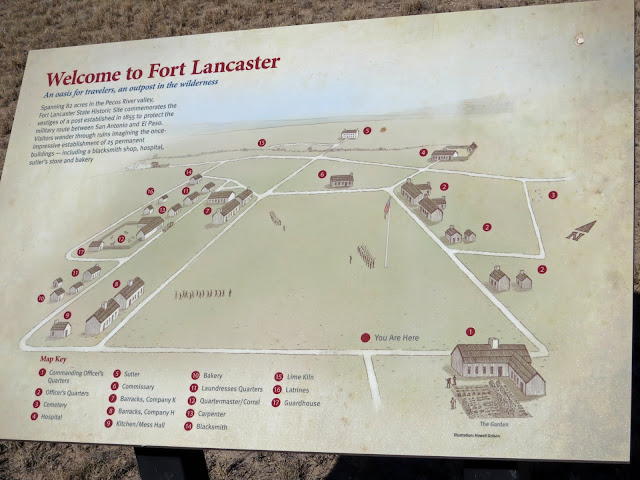 Western forts, not so much. The "forts" out here tend to be collections of buildings, often spread out quite a ways, with no surrounding stockade. To me they have more in common with company towns than they do with the traditional forts or Europe and the Eastern US.

Fort Lancaster was situated along the southern route connecting the eastern part of the country with the west coast and sprawled out across more than 80 acres in the Pecos River Valley alongside Live Oak Creek about 200 miles west of San Antonio and 300 miles east of El Paso. 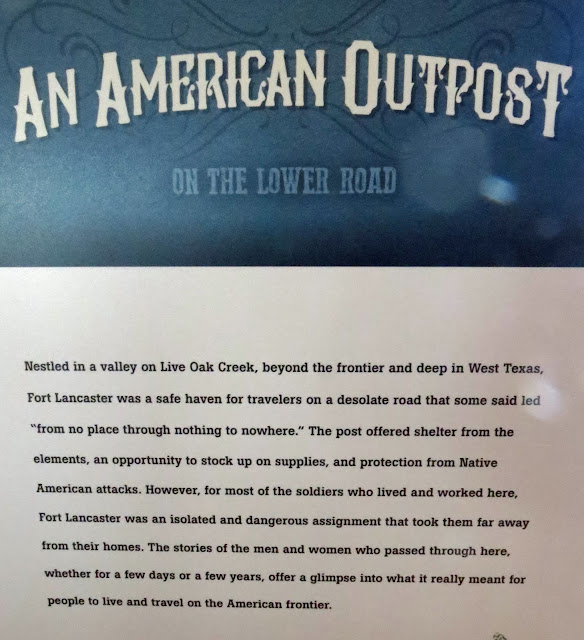 As I pointed out, though it is a state site, the Texas Historical Commission and the Texas Parks and Wildlife are two different entities so my Parks Pass was no good here. But the $4 entrance fee seemed reasonable so I paid anyway and, despite it being the weekend, had the place to myself until just before I finished up my tour.

(BTW the fee includes the use of a golf-cart to tour the fort if you don't have enough shoe-leather left to walk it.)

The visitor center was rebuilt about 4 years ago and includes a small but informative museum. 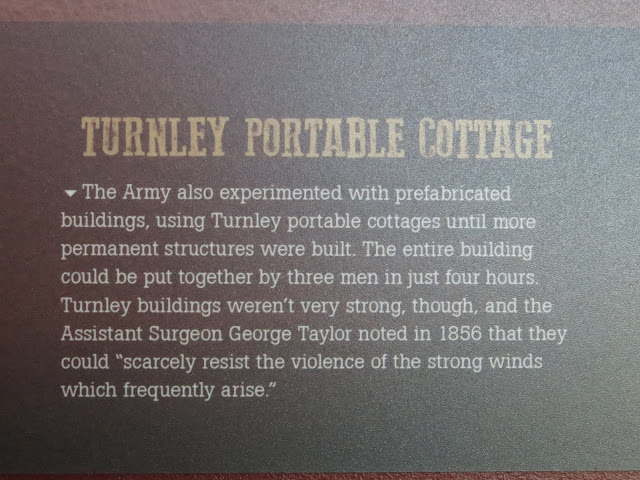 This is where I learned that modular homes were being carted around (literally) before the Civil War, though apparently they didn't impress. . . 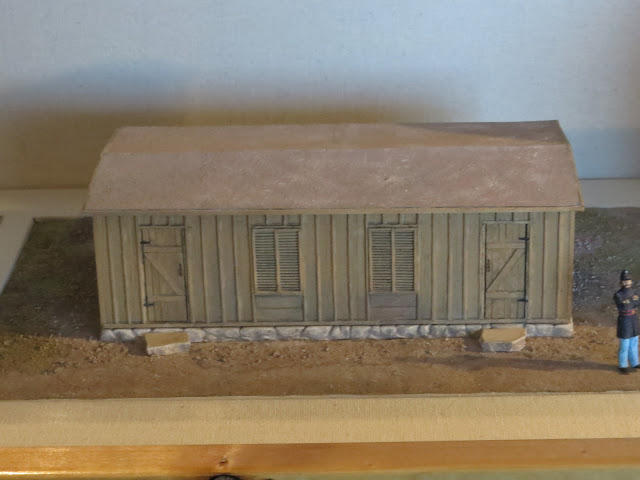 This is a model of a Turnley Portable Cottage which was used as quarters for the soldiers, 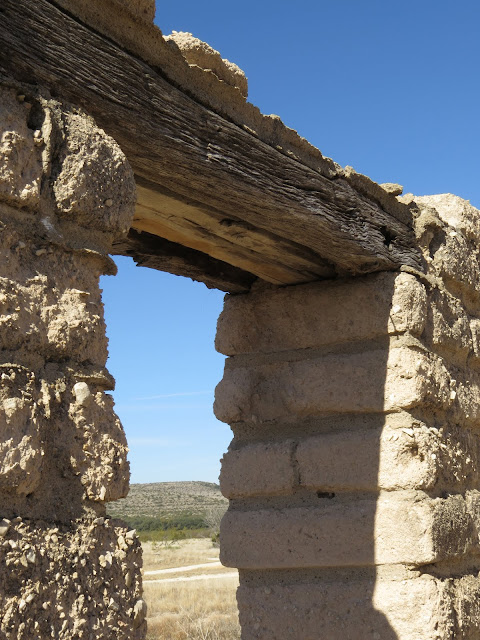 until more permanent stone and adobe structures could be built. 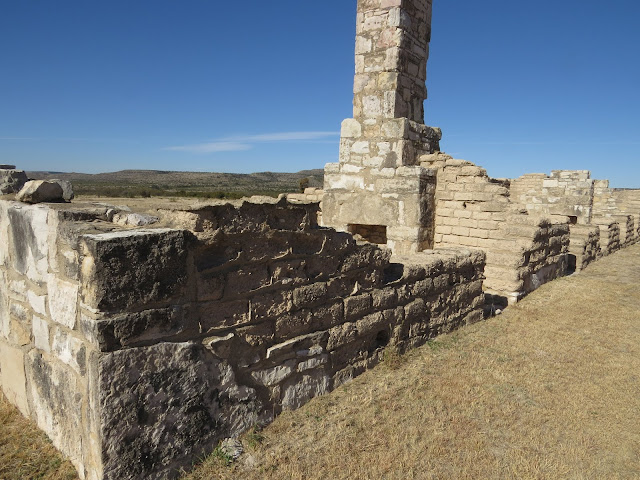 If you look close at this remnant of one of the barracks buildings you can see the cut limestone blocks mortared into place in the corners to provide stability while the rest of the wall is filled in with adobe blocks.

This was typical of most the "permanent" buildings here at the fort. 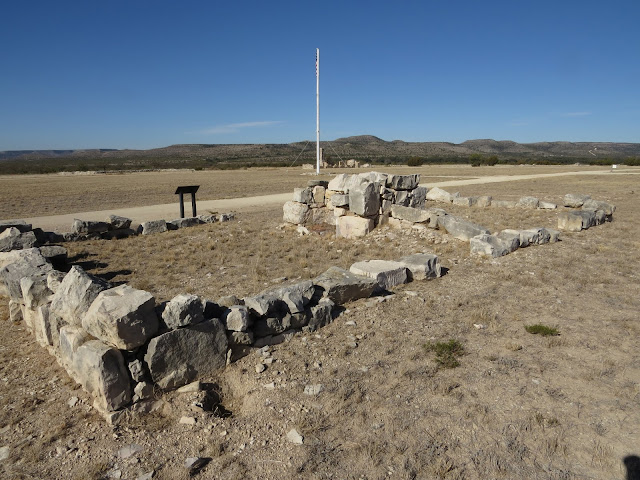 Once the fort was abandoned around 1880 most of the buildings, such as this officer's quarters looking out over the massive parade grounds, were dismantled and the bits carted across the river by the civilians that built the nearby town of Sheffield. 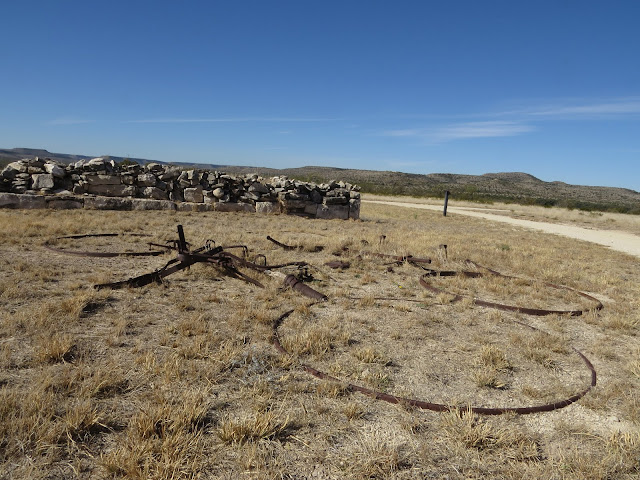 What was once the only Army post in Texas to be actually attacked by the Native Americans that were being displaced from their lands, is now a field littered with remnants, such as these iron bits sitting beside the blacksmith shop, all that's left of a wagon, neatly laid out where they would have fallen as the wood rotted away. 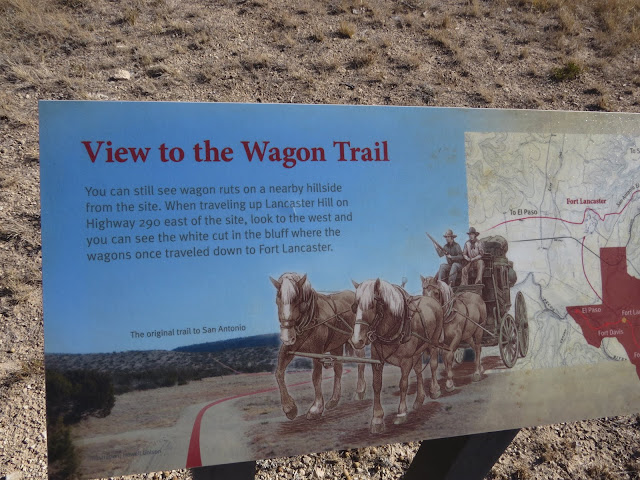 The story of Fort Lancaster, of most of these western forts, is the story of governments expanding their territory, of native peoples dealing with an invasion of their lands, of entrepreneurs finding opportunities, of immigrants that barely speak English enlisting to secure themselves place in this country, of laundresses hauling water from the creek in buckets and scavenging the land for wood to heat that water, then, in the time left over, washing, ironing and mending the clothing of the soldiers, all for $2 per man per month, in order to bring in about $40 per month, (The army allowed 4 laundresses per company, or about 1 for every 20 men) which was more than most could earn elsewhere. (An Army private earned around $32 per month.)

I think that it's important to preserve and visit places like like this, not so we can crow in triumph at what we accomplished, or stomp off in righteous indignation over the atrocities we committed along the way, (Though it does nobody any good to forget either of these.)  but to try and see things in context, to try and understand the motivations and drivers behind events, and to appreciate the personal lives of those living the events. Things that are not always available in textbooks but can only be learned by walking the land and places where our history occurred with an open and empathetic mind. By standing on the same ground, closing your eyes, and letting the ghosts of those that went before give you a little glimpse of the past. Not the sanitized text-book version of the propagandized 60's and 70's when I was in "school", (Columbus discovered America! Yeah right!) not even that black-and-white Hollywood crap we were fed as kids by the boob-tube on Saturdays, but rather the real past as it was lived by those that were there. 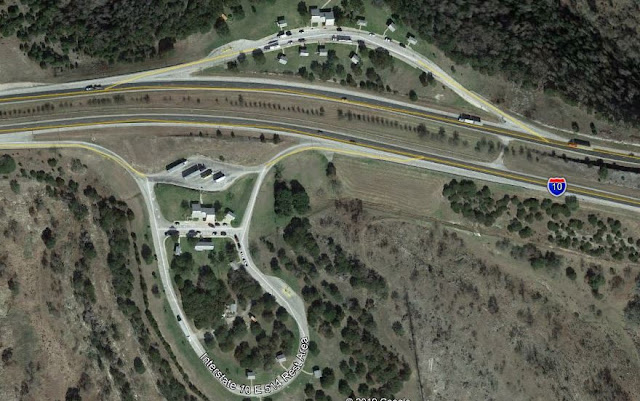 This is my last full day on the road for this trip. Tomorrow I will get home and start prepping for Thanksgiving coming up in a few days.

The westbound rest area here is pretty run of the mill, but the eastbound area is another one of those gems where you can get far from the interstate as well as the parked trucks. (It also has a working dump-station.)

One person stated in a review on the Free Campsites app that it was "nice clean and quiet. Very little truck noise." Then he proceeded to brag about how he parked his 40' fifth-wheel on that quiet back loop, opened the slides, and fired up the generator - an ear-busting contractor generator no doubt. 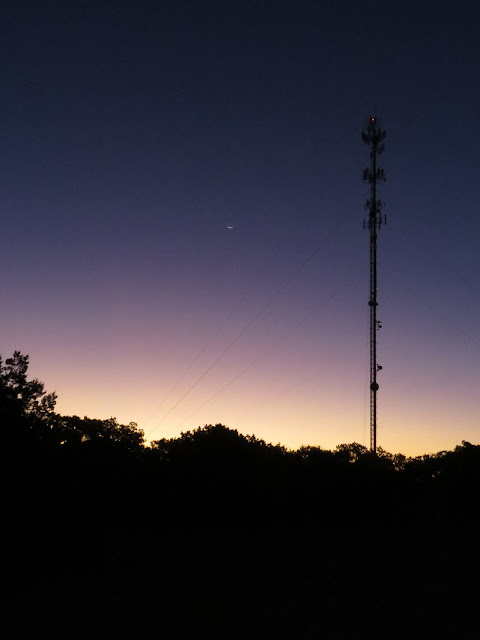 Fortunately for me, that guy wasn't here tonight.